Totalitarianism in the Soviet Union, Italy, and Germany

A totalitarian government is a modern autocratic regime in which the state controls all phases of society. It not only seeks to control the economical and political aspects of society, but also tries to direct the daily lives of its citizens. Totalitarianism strives to influence the attitudes, beliefs, and opinions of its people through manipulation of the press and the media. It teaches young men to value their bodies more than their minds, thus creating a politically languid mass of law-conforming puppets.

Don't use plagiarized sources. Get your custom essay on
“ Totalitarianism in the Soviet Union, Italy, and Germany ”
Get custom paper
NEW! smart matching with writer

Its ultimate goal is to establish a perfect society based upon its own idealistic aspirations. Different totalitarian systems have different goals. The major totalitarian states that arose during the period following World War I were the Soviet Union under Stalin, fascist Italy under Mussolini, and Nazi Germany under Hitler.

The first real totalitarian government after World War I was Stalin’s Soviet Union. The failure of the Communist’s proletarian struggle to achieve any significant goals compelled Stalin to undertake some drastic changes to the Communist party.

Stalin’s idea of “Socialism in One Country” deviated away from the foundations of Communism and emphasized the importance of nationalism. He also postponed Lenin and Marx’s idea of “Permanent Revolution”. In taking power away from the proletariats, Stalin achieved dictatorial status as the sole leader of the Soviet nation.

As dictator, he controlled many aspects of social life, as well as dominating economic and political supremacy. For example, he directed the Great Purge, in which he used violence and aggression to maintain absolute control over the Soviet Union.

However, unlike the totalitarian governments of Italy and Germany, Stalin initiated a democratic constitution that could match that of any Western European country.

In Italy, a totalitarian government arose after World War I because of the parliamentary regime’s lack of productivity and stability. Mussolini’s sovereignty brought about stability at the expense of much of the people’s political and economical independence. In addition, his regime directly affected the social aspects of Italian life. For example, he instituted Fascist ideas into the youth through public education and strictly monitored mass media. Like most other totalitarian regimes, Italy under Mussolini also employed many acts of violence to insure political domination and eliminate any revolutionary conspiracies.

Meanwhile, in Germany, Hitler created the totalitarianistic Nazi Party. Like the other totalitarian systems, Nazi Germany came about because of its promise of economic and political stability. Again, at the expense of such security was the eradication of individuality. Hitler did more than manipulating the mass media and demanding strict discipline and conformity of his citizen’s. He voiced hostility towards imaginary enemies to strengthen his totalitarian ideas of nationalism and Aryan superiority. He blamed the Jews for all of Germany’s economic shortcomings and strongly championed anti-Semitism. His use of violence and neo-pagan aggressions towards the Jews established racism as the underlining factor in his totalitarian regime.

Despite the distinct differences between these totalitarian states, they all shared several common characteristics. Soviet Union, Italy, and Germany all tried to control all aspects of life with underhanded manipulation and the use of violence to purge their political enemies. In addition, they all were generally led by a single dictator, who controlled the police, the military, the media, and the educational systems. Finally, they all required their citizens to conform to their ideals rather allow them to achieve any social, economical, or political freedoms.

Totalitarianism in the Soviet Union, Italy, and Germany. (2016, Jun 26). Retrieved from https://studymoose.com/totalitarianism-in-the-soviet-union-italy-and-germany-essay 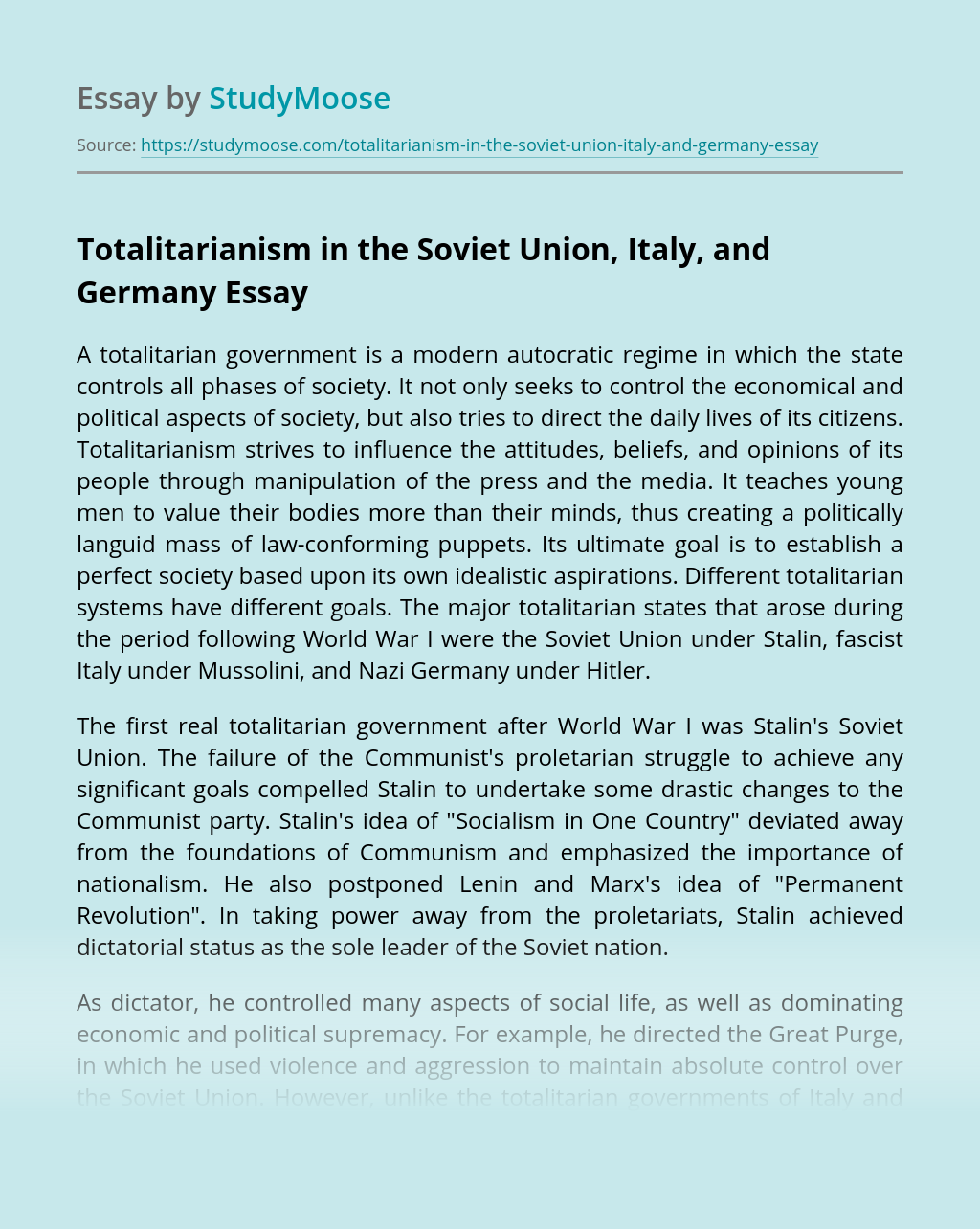