Pizza is an oven-baked, flat, round bread typically topped with a tomato sauce, cheese and various toppings. Pizza was originally invented in Naples, Italy, and the dish has since become popular in many parts of the world.. Many varieties of pizza exist worldwide, along with several dish variants based upon pizza. Pizza`s in Pakistan The first pizzerias opened up in Karachi and Islamabad in the late 1980s, with Pappasallis serving pizza in Islamabad since 1990.

Pizza has gained a measure of popularity in the eastern regions of Pakistan namely, the provinces of Sindh, Punjab, and Azad Kashmir, as well as the autonomous territory of Gilgit-Baltistan.

Don't use plagiarized sources. Get your custom essay on
“ Italian Cuisine and Pizza ”
Get custom paper
NEW! smart matching with writer

Pizza has not penetrated into western Pakistan; of the remaining provinces and territories of Pakistan, only one (Khyber Pakhtunkhwa) has seen much of the dish, in the form of a single Pizza Hut in Peshawar. In the regions where pizza is known, spicy chicken and sausage-based pizzas are very popular, as they cater to the local palate.

Health matters Advantages European nutrition research on the eating habits of people with cancer of the mouth, oesophagus, throat or colon showed those who ate pizza at least once a week had less chance of developing cancer. , An antioxidant chemical in tomatoes, which is thought to offer some protection against cancer. Carlo La Vecchia, a Milan-based epidemiologist said, “Pizza could simply be indicative of a lifestyle and food habits, in other words the Italian version of a Mediterranean diet.

Disadvantages In contrast to the traditional Italian pizza used in the research, popular pizza varieties in many parts of the world are often loaded with high fat cheeses and fatty meats, a high intake of which can contribute to obesity, itself a risk factor for cancer. Pizza can be high in salt, fat and calories. There are concerns about negative health effects.

Food chains, such as Pizza Hut, have come under criticism for the high salt content of some of their meals, which were found to contain more than twice the daily recommended amount of salt for an adult. Some mass produced pizzas by food chains have been criticized as having an unhealthy balance of ingredients. Some studies have linked consumption of the antioxidant lycopene, which exists in tomato products that are often used on pizza, as having a beneficial health effect. 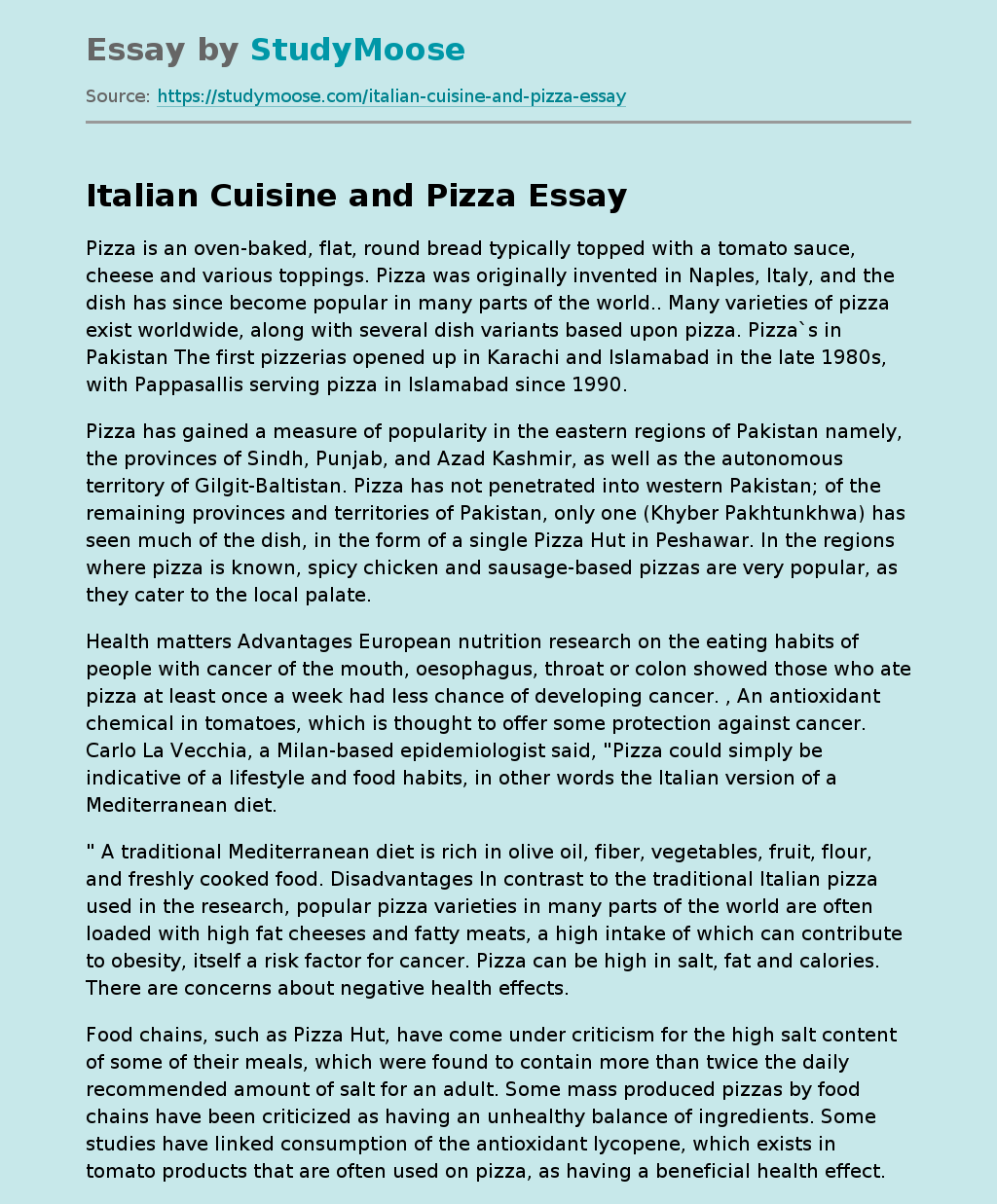