Reading about Greece is like going aboard an airplane to visit the country for a vacation. I have learned a lot about Greece from conducting research and further readings that it seems like I have been there already. Greece has a rich historicity and culture. It also boasts of beautiful sceneries and wonderful vacation spots that I would want to visit, enjoy and indulge myself in. Greece is made up mostly of mountainous areas. The highest mountain peak in the country is the popular Mount Olympus, which reminds me of the Greek’s artistry and creativity as its association to Greek mythology is established through subjects literary studies of the western civilization.

Don't use plagiarized sources.
Get Your Custom Essay on Traveling To Greece Just from $13,9/Page

Some areas of Greece also consist of numerous islands. (CultureGrams)

The entire population of Greece is made up of Albanians, Turks, Romas or gypsies, and other nationalities and groups who have migrated to the country. Despite the variety of its inhabitants, the official language of the country is still Greek.

In fact, some Greek terms have been popularized as part of our everyday conversations in medicine, physics, and other fields of study. The prevailing religion in Greece is the Eastern Orthodox. Majority of the Greek population is a member of this religious institution, as it is declared to be the state’s official religion. Greeks also hold similar values to other culture because they consider family, friends, religion, culture, and education as significant in their lives. (CultureGrams)

The Greeks are pleasant people as shown in how they express themselves, how they treat each other, and how they live as a whole. They are affectionate and expressive of their feelings. For instance, I have read that they greet other people through hugs, kisses and greetings that express respect, especially to the elderly. It seems that family honor is also valuable to them because they avoid causing disrespect or disgrace to their families. Moreover, if I am to go travel to Greece for a vacation, I am sure I will be enjoying my stay there because Greeks consider visitors as gods in disguise that is why they treat them kindheartedness. (CultureGrams)

I have only discussed a sneak peek of Greece. Further research through the use of online travel guides and advisories have provided answers to my inquiries regarding Greece as a tourist destination and other relevant information. Lamb, seafoods, olives and cheese, cooked with olive oil and garnished with a variety of spices, are the usual ingredients of the traditional Greek menu. (CultureGram) Since I am craving for an authentic Greek delicacy, I have discovered two dishes that are part of the traditional home cooking. These are the avgolemono soup, lamb fricassee, stifado, arni psito, and many more. The Greek menu would not be complete without the barrel wines. (Fodor’s)

I have also read several tourist destinations that complete the total Greek experience. Athens is a great destination for a glance of the history of Greece. I will be able to appreciate the architectural design of the Parthenon and Propylaea upon visiting the Acropolis in Athens by mean of hiking or walking trips (Fodor’s). To gain more information about the history of Greece, I want to tour the National Historical Museum, where the ingenuity and creativity of the Greeks are exhibited (Orbitz). In the evening, live presentations to entertain dinner guests are enjoyed in fine dining restaurants situated adjacent to the Acropolis (Expedia).

Mount Athos is also a perfect place for relaxation and soul-searching; however, men are only allowed to visit the sanctuary of monks and monasteries. (Travelocity)  Since some areas of Greece are islands, tourists seeking for water adventures can visit Crete, Rhodes and other islands. Several beaches surround these islands, and establishments situated in these areas guarantee total entertainment for tourists visiting the islands. (Travelocity) Activities are available for the sports-minded and the athletic type of tourist. I have discovered that there activities for vacationers who are always on the go, such as biking, diving along the Attican coast, Crete, Rhodes and other islands, fishing, hiking in Crete and other mountainous areas of Greece, horseback riding, mountaineering, skiing on Mount Parnassus, spelunking, and other water sports.

Water sports include cruising over the numerous islands of the Greek archipelago, parasailing, kayaking and river rafting in Epirus, and many more. (Travelocity) The Absynnia Square, the Central Market, and flea markets in Monastiraki and Pasalimani are perfect places for shopping and bargain hunting for the tourists who want to take home a piece of Greece with them. There are various finds in these marketplaces such as food, clothes, and dry goods. (Fodor’s)

I have also researched about travel advisories and other requirements in traveling to Greece. Travel advisories have suggested that it is best to go to Greece during the end of fall and spring, where the weather is favorable for touring vacationers. This is also to avoid crowded streets and places. To enjoy the Greek’s celebration of Easter, it is also an option to visit Greece in April or May. (Fodor’s) Tourists who visit Greece are only required to obtain a passport, which is only valid within 90 days. Visa extensions are needed to stay in Greece for after the duration period of 90 days. Fines will be paid, in Euro (Greek currency), their when these conditions are violated. (Fodor’s) For currency conversions, banks along Syntagma and Omonia squares are most accessible.

However, currency exchange in banks is only available until two in the afternoon. (Fodor’s) Concerning time difference, conversions may be based on the time zone adapted by Greece, which is Eastern European Time (EET) +0200 UTC (WorldTimeServer). There are still other information available for review and readings in numerous sources to encourage people to visit Greece; however, nothing beats personal experiences. After conducting much research and readings about Greece, I for one, am convince that visiting Greece would be a worthwhile experience. I can write about travel advisories I have read in online sources, but for me, the best travel advisory is to have fun, enjoy, and indulge in everything Greek for the total Hellenic experience. 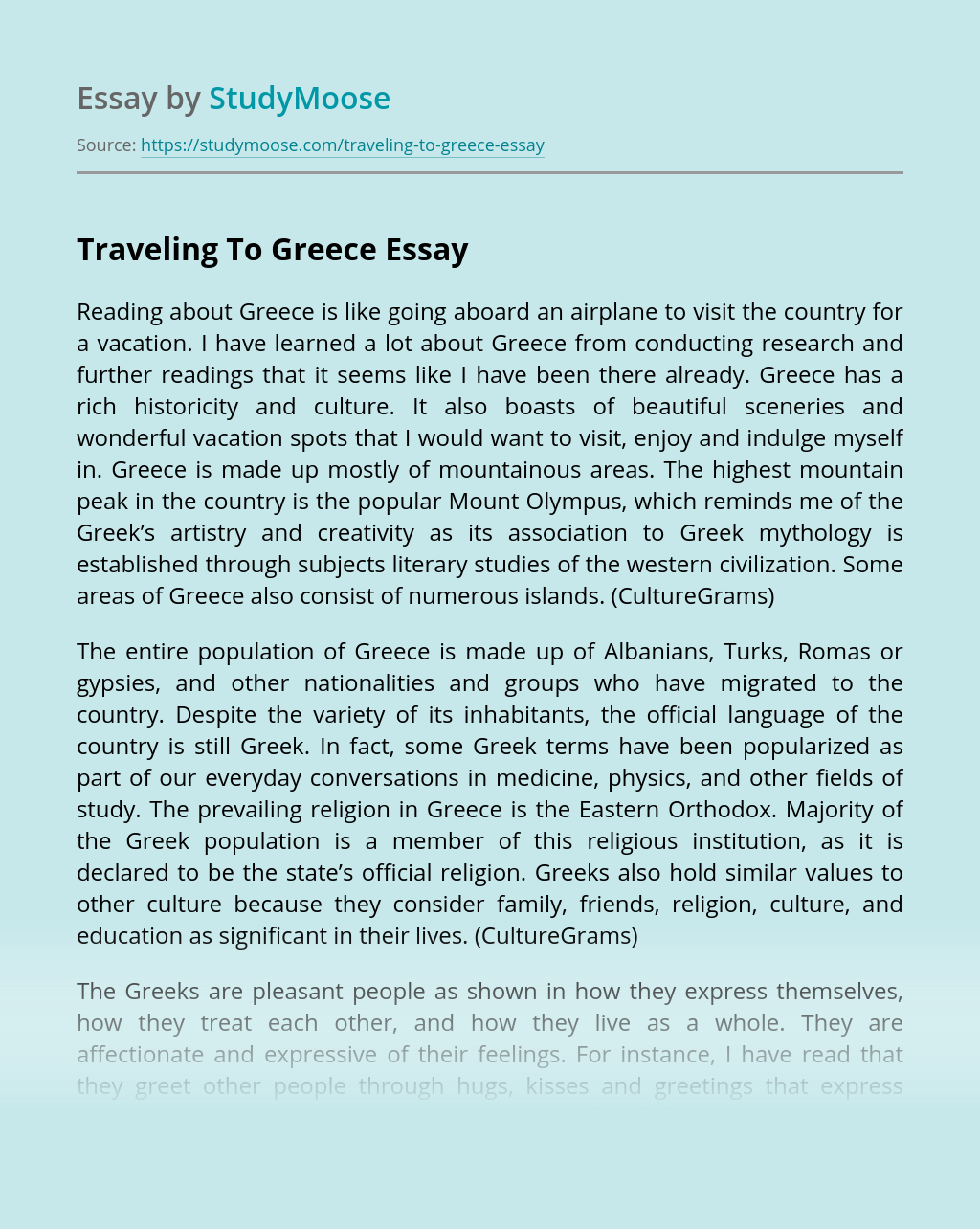 Compare and Contrast the Ways in Which Shakespeare and Webster Present Hamlet and Bosola as Tragic Heroes.

Bosola from Webster’s The Duchess of Malfi and Hamlet from Shakespeare’s Hamlet, both present elements of Aristotle’s model of the tragic hero; through both of the characters, Shakespeare and Webster use the features of the tragic hero to engage Elizabethan and Jacobean audiences in an exploration of issues linked to the Renaissance, religion and philosophy.... VIEW ESSAY

An artist must be creative in order to create a phenomenal cave art; creativity is the use of imaginations in order to create something. Cave painting is a type of parietal arts on the interior of a cave with depictions of animals, cave painting was the most common method of communication around the year 30,000... VIEW ESSAY

ASSIGNMENT BMMF5103 MANAGERIAL FINANCE 15 July 2013 QUESTION 1 a) Maximizing shareholder wealth is a “moral imperative” for financial manager means managers are supposed to work for shareholders who are the actual owners of a company or corporation. Shareholders elect company directors who in turn hire managers to run the company on day to day... VIEW ESSAY

Mark Rothko is one of the important figures in the generation of painters. His work still draws attention to many people around the world. Born in Dvinsk, Russia (in what is now Latvia), Marcus Rothkovich was the fourth child of Jacob Rothkovich, a well to do pharmacist and his wife Anna Rothkovich. As Russia was... VIEW ESSAY

They are also cheap, light, durable, easy to carry and in many cases, free. The most commonly used shopping bag is made of High Density Polyethylene (HDPE). This type is used in the majority of supermarkets and stores. After these bags are used, they often end up in landfills or as litter, roughly only three... VIEW ESSAY