The Pizza Company vs the Pizza Hut

It is surprising that Pizza has become a popular food among Thai people. The Pizza Company and The Pizza Hut, the only two biggest pizza companies in Thailand, have contended for the pizza leadership for many years. People consume so much of pizzas that pizzas have been in the top ten Thais’ favorite foreign cuisine. While using service of these two companies, have you ever noticed the distinction between the two companies? Actually, there are three qualities that are considered different between The Pizza Company and The Pizza Hut.

Don't use plagiarized sources. Get your custom essay on
“ The Pizza Company vs the Pizza Hut ”
Get custom paper
NEW! smart matching with writer

Firstly, The Pizza Company and The Pizza Hut are dissimilar in terms of varieties of menu. The Pizza Company has varieties of menu. It innovates six new pizza toppings per year, so the innovation is every two months in average. For example, “30 Bites Pizza”, the new pizza topping, has just innovated recently. Now, this brand has more than thirty toppings, sells more than ten kinds of Pasta and has Swensen’s and Dairy Queen as extra menus for delivery order.

In contrast, The Pizza Hut has fewer menus than The Pizza Company.

The brand realized that crust is the part which people often leave it, so they try to persuade the customers by creating the diversities of crusts.

In addition, The band appeals to teenagers by using teenage presenters such as Froy Nattapong and sponsoring famous reality show, Academy Fantasia. On the other hand, The Pizza Hut has fewer marketing activities. As a 50-year band, The Pizza Hut concentrates only on the food innovations. The brand gives important to the food innovation and the quality of food. They form the “Innovation Team” to develop Pizza menus and test the taste of every new Pizza. Nevertheless, this strategy does not persuade the customers well as The Pizza Company’s marketing activities. Moreover, The Pizza Hut uses just the ordinary media.

The Pizza Company vs the Pizza Hut. (2017, Apr 06). Retrieved from https://studymoose.com/the-pizza-company-vs-the-pizza-hut-essay 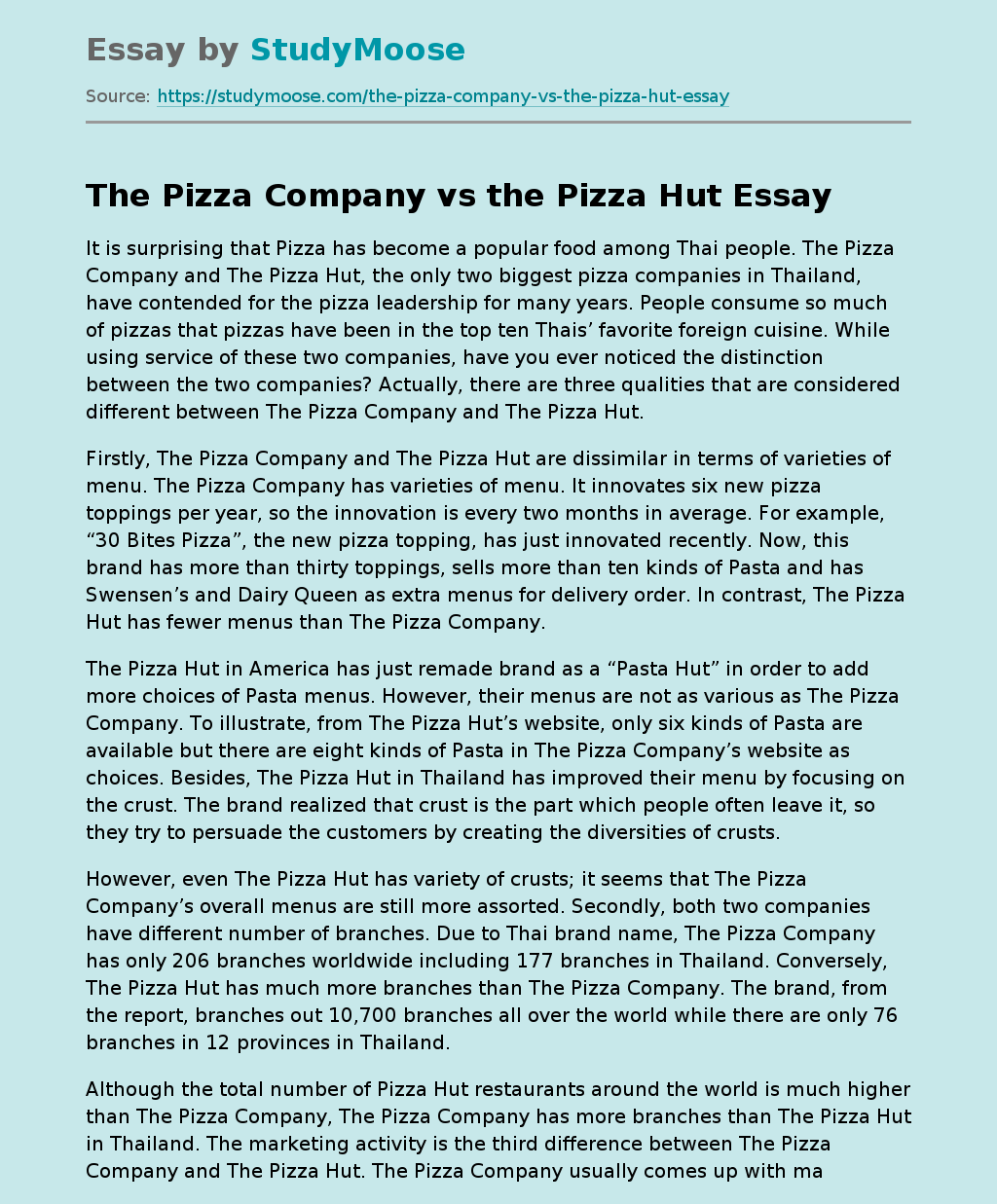