The economic factor is also a major factor for causing the telecommunication industry to prosper around the globe as it contributes towards the improvement to the GDP of the country.

The demographic factor had facilitated and hindered Apple in its expansion to Europe as the main purchasers of Apple’s iPhone were the people who were 35 years older or younger that had a university degree which caused a good opportunity for expanding to Europe.

However, the customers of Europe already had 3G functions which reduced its competitiveness in the market. On the other hand, the legal factors have caused delay in 2007 to Apple’s iPhone expansion in France due to its two different regulations that prevented Apple in entering the market for a time period (Patel, 2007).

The economic factor has also resulted in hindering the expansion of Apple in Europe as it had caused Apple to raise its price compared to US due to VAT charge in Europe. Lastly, the culture factor had also hindered on Apple’s expansion as customer were concerned that the iPhone device would be out-dated in terms of non-removable battery and limited battery life. Globalization of market refers to meeting the buyer preferences in the market.

Apple had been able to quickly penetrate the European market through its effective market entry strategies. For expanding to Europe, Apple had utilized many telecommunication corporations for entering the European market. In its successful attempt for expanding to UK, Apple had selected O2 or also referred to as Telef?nica UK Limited that is telecommunication provider in UK. Both O2 and Apple had made a partnership in which O2 would be selling Apple’s new iPhone to the UK customers for a price margin. The pricing strategy of iPhone in the UK market was around ?269 which included the VAT costs. The prices of Apple in UK were higher compared to the US price.

For selling in Germany, Apple made an agreement with T-Mobile and the phone was sold for 399 Euros (Pfanner, 2007).

For entering the French Market, which had been possible with the partnership of the company known as Orange. However, Apple was faced with hurdles in its expansion to France due to the unlocking laws where it lost lawsuits by challenging this law (Patel, 2007).

This case could apply to “Ooredoo Telecommunication company” if they wanted to expand globally. Ooredoo is the leading telecommunication company in Qatar. Based on the analysis of the case study, Ooredoo has also a good opportunity in expanding its product to the global market because they will likely be supported by the Qatari government. Ooredoo should be developing a proper plan in its mobile handset or smartphone manufacturing in which the functions would be different than the competitors while also meeting the expectations of the customers. They should also do promotional activities by announcing the functions and capabilities of its new mobile handset in the target market. It is important for the promotional activities in enabling the product to differentiate itself from the competitors.

Also, it is crucial that Ooredoo consider the political, social, cultural, economic and technological factors while expanding its products to other countries. These factors have strong influence the global expansion of Ooredoo, therefore, it is crucial important to analyze these factors. The price factor is also important element on the success of the product as Apple’s iPhone had high price margin in which only the middle and upper class were able to afford the product. Therefore, Ooredoo needs to set a price for its new product that is neither too low or too high for selling its product in the global market. They should also have a good plan to enter the foreign market in an appropriate way.

Patel, N. 2007. iPhone delayed in France due to unlocking laws?. [online] Available at: 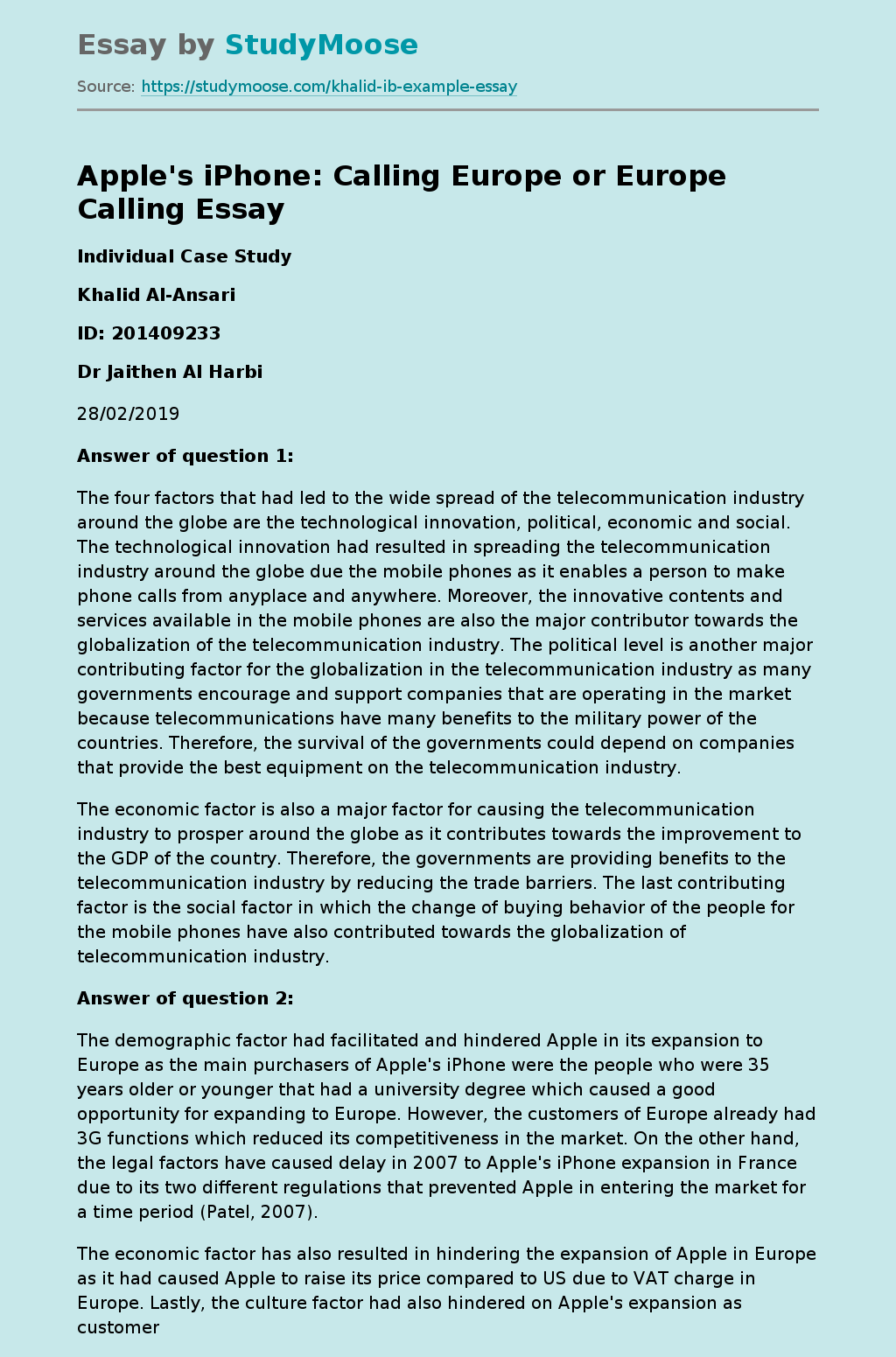