Don't use plagiarized sources. Get your custom essay on
“ Apple Introduction: Iphone, Ipad and the Company ”
Get custom paper
NEW! smart matching with writer

See more: how to write an introduction paragraph for an essay

iPhone combines a mobile phone, an iPod, and an Internet communications device in a single handheld product.

Based on the Company’s Multi-Touch user interface, iPhone features desktop-class email, Web browsing, searching, and maps and is compatible with both Mac and Windows-based computers. iPhone automatically syncs content from users’ iTunes libraries, as well as contacts, bookmarks, and email accounts. iPhone allows customers to access the iTunes Store to download audio and video files, as well as a variety of other digital content and applications. In September 2012, the Company launched iPhone 5, its latest version of iPhone. In addition to the Company’s own iPhone accessories, third-party iPhone compatible accessories are available through the Company’s online and retail stores and from third parties.

iPad is a multi-purpose mobile device for browsing the Web, reading and sending email, viewing photos, watching videos, listening to music, playing games, reading e-books and more. iPad is based on the Company’s Multi-Touch technology and allows customers to connect with their applications and content in a more interactive way. iPad allows customers to access the iTunes Store to download audio and video files, as well as a variety of other digital content and applications. In March 2012, the Company launched the iPad, its third generation iPad, and in October 2012, the Company announced its fourth generation iPad and iPad mini. In addition to the Company’s own iPad accessories, third-party iPad compatible accessories are available through the Company’s online and retail stores and from third parties.

The Company’s iPod line of portable digital music and media players includes iPod touch, iPod nano, iPod shuffle and iPod classic. All iPods work with iTunes. In addition to the Company’s own iPod accessories, third-party iPod-compatible accessories are available through the Company’s online and retail stores and from third parties. The iPod touch, based on iOS, is a flash-memory-based iPod with a widescreen Retina display, a Multi-Touch user interface, and built-in iSight camera. iPod touch allows customers to access the iTunes Store to download audio and video content, as well as a variety of digital applications.

The iPod nano is a flash-memory-based iPod that features the Company’s Multi-Touch interface allowing customers to navigate their music collection by tapping or swiping the display and built-in Bluetooth for wireless listening. The iPod shuffle is a flash-memory- based iPod that features a clickable control pad to control music playback and VoiceOver technology enabling customers to hear song titles, artists and playlist names. The iPod classic is a hard-drive based portable digital music and video player.

iTunes is an application that supports the purchase, download, organization and playback of digital audio and video files and is available for both Mac and Windows-based computers. iTunes features integration with iCloud, AirPlay wireless music playback, Genius Mixes, Home Sharing, and syncing functionality with iOS devices. iTunes is integrated with the iTunes Store, a service that allows customers to discover, purchase, rent, and download digital content and applications.

The iTunes Store includes the App Store and iBookstore.

iCloud is the Company’s cloud service, which stores music, photos, applications, contacts, calendars, and documents and wirelessly pushes them to multiple iOS devices, Mac and Windows-based computers. iCloud’s features include iTunes in the Cloud, Photo Stream, Documents in the Cloud, Contacts, Calendar, Mail, automatic downloads and purchase history for applications and iBooks, and iCloud Backup. Users can sign up for free access to iCloud using a device running qualifying versions of iOS or OS X.

The Company offers a range of software products for consumers and for SMB, education, enterprise and government customers, including the Company’s iOS and OS X operating system software; server software; professional application software; and consumer, education, and business oriented application software. iOS is the Company’s mobile operating system that serves as the foundation for iOS devices. iOS supports iCloud and includes features, such as Notification Center, a way to view and manage notifications in one place; iMessage, a messaging service that allows users to send text messages, photos and videos between iOS devices, and Maps, with turn-by-turn navigation. iOS supports Siri, a voice activated intelligent assistant, which is available on qualifying iOS devices. OS X, the Company’s Mac operating system, is built on an open-source UNIX-based foundation.

iWork is the Company’s integrated productivity suite designed to help users create, present, and publish documents, presentations, and spreadsheets. iWork includes Pages for word processing and page layout, Keynote for presentations, and Numbers for spreadsheets. The Company also has a Multi-Touch version of each iWork application designed specifically for use on iOS devices.

The Company also sells various other application software, including Final Cut Pro, Logic Studio, Logic Pro, and its FileMaker Pro database software. The Company manufactures the Apple LED Cinema Display and Thunderbolt Display. The Company also sells a range of Apple-branded and third-party Mac-compatible and iOS-compatible peripheral products, including printers, storage devices, computer memory, digital video and still cameras, and various other computing products and supplies. Apple TV allows customers to watch movies and television shows on their high definition television. Content from iTunes, Netflix, YouTube, and Flickr, as well as music, photos, videos, and podcasts from a Mac or Windows-based computer can also be wirelessly streamed to a television through Apple TV.

Apple Inc. Is arguably one of the most successful companies in the world, enjoying one of the most visible brand names in the world. Its launch of new products is usually waited with heightened anticipation by consumers around the world, and its financial performance has been exemplary. This success can be attributed to two main factors; the visionary leadership offered by its immediate former chief executive Steve Job and the strategic goal of emphasizing on design and the willingness to develop new products by taking risk of developing new products for the market.

The strategic goal of developing new products, while at the same time emphasizing on design, has been successful because it has utilized the components of strategic implementation. The allocation of resources by the company in the developing of new products has been substantial, and more often in well thought and planned processes. The financial resources focused on the development of new products with new and superior designs can be said to follow Sun Tzu’s strategic principles of knowing oneself and knowing the enemy, who in this case would be the competitors. Apple Inc., by utilizing the superior capabilities in its possession, has been able to develop products superior to those developed by its competitors and thus acquiring a valuable market segment.

Since Steve Jobs joined the company in 1998, the company has been growing in leaps and bounds simply because of the building of a capable organization by focusing on the areas of improvement. The company has been able to make a focus on the development of new products of superior design to those of competitors, and has improved continuously on these products. Steve Jobs can be compared to the military genius with all the traits developed by Clausewitz; intellect, courage to develop new products for the market, ability to adapt to changes and strength of character. These traits of the chief can be said to have contributed to the strategic success of the company.

The support systems employed in Apple Inc are some of the best, and the company being in the electronics and telecommunications business has seen to it that their implementation is well carried out. The company has numerous operation centres spread across the globe and despite this the working towards the development and production of new products seems seamless because of this excellent support system utilised by the company’s employees. Communication between the layers of operations of the company is seamless, and no time and resources are wasted on the process of communicating decisions and feedback between the hierarchical levels of the company. This can be likened to Sun Tzu’s advocacy for speed in battle; good support systems offer an opportunity for fast and efficient decision making which ultimately leads to corporate success.

The policies of the company that have been established in the recent past indicate their supportiveness to the strategy of developing new products superior in design, one of the eight components of implementing strategy. The outsourcing of production of apple products to China can be used as an example of this, with the goal of reducing production costs while maintaining the high quality of the products. 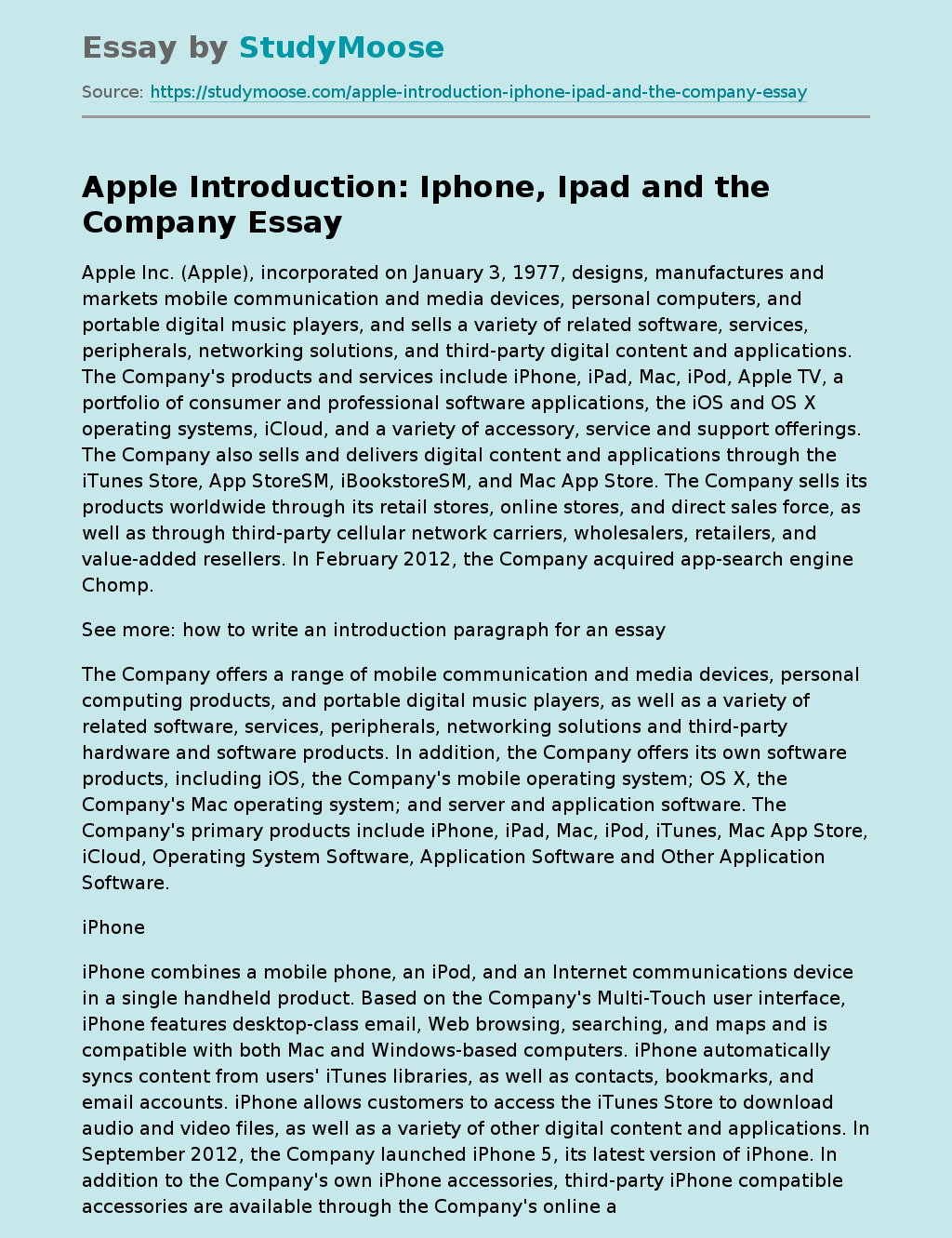