The male child W was observed four times, over the course of two weeks, totaling four hours. He was placed in a classroom designated for 2-year-olds along with about 12 other children, staffed by two full-time teachers, and a part-time teacher. The classroom was a very loud, and over decorated environment. Not only were the walls completely covered with posters and pictures, but there were art projects hanging from the ceiling as well.

The classroom was divided into specific areas for play, eating, and story time; however, there was not enough room for the children to freely run around.

Don't use plagiarized sources.
Get Your Custom Essay on Toddler Observation Research Paper Just from $13,9/Page

The children spent time outside on the playground in the backyard that had picnic tables, toy houses, trucks, cars, swings, and many other toys. The 2-year-olds shared their outdoor time with infants that were pushed around in a large stroller. When the children were brought outside there were a total of 4 teachers outside supervising them. Cognitive/Language

The child W was able to effectively back up the toy car he was driving after becoming stuck.

He performed this task multiple times. He also frequently engaged in make-believe play with the other children, such as driving a racecar and motorcycle, sailing in a boat, and cooking in a toy kitchen.

Throughout the observation, the child W spent a great amount of time watching the other children play, and learned through his peers what not to do. For example, when another child fell off the top of a table, the child W immediately got down and was never observed standing on top of a table again. The child also showed a wide range of vocabulary throughout the observation.

He was able to form simple sentences, such as “Sit down or fall down” when one of his playmates was standing on top of a table, and “No, stop that” when a playmate tried pushing him around in the toy car. The child W also used simple descriptive words like “really really loud,” when a motorcycle passed by and when a plane flew overheard.

He made many sounds relating to the toys he played with or actions he was making, such as “vroom” and “beep” when driving a car, and “swish” when running. The child W was also observed mimicking noises and words the teachers would say, such as “playground,” “change diaper,” and “be quiet.” Physical/Movement

The majority of the physical movement observed falls into the category of gross motor skills. On the outside playground, the child W was consistently observed pushing and pulling toys. During each observation he was seen riding bikes and cars, pushing a toy lawnmower, as well as rolling miniature cars and trucks on the ground. When he was riding the bike and car, he used either his feet or the pedals to propel himself forward and backwards. One time, the child W and another child were observed jumping in and out of the doorframe of the toy house for several minutes.

They then climbed out of the window, with the child W leading the way. When moving around the playground, the child W was observed mostly running from one activity to the next. However, when he was inside, he was usually observed walking. During an inside recess, the child W spent a lot of time playing with a toy camera, pretending to take pictures, and saying “cheese.” He also spent several minutes slowly and carefully riding a tricycle around the perimeter of the large rectangular carpet, making at least 3 full laps.

Since the majority of the observation time was spent on the playground, this observer did not have many opportunities to observe the child’s fine motor skills. However, when presented with linking blocks during a class activity, the child W was observed having difficulty connecting the toys together and asked for help. When asked to put on his sweatshirt, the child could not get his head through the hole, and asked for help again. Social/Emotional

As previously indicated, the child W was observed seeking assistance from his teachers many times. During each observation, the child W asked a teacher to push him on the swings, to pick him up and hold him, and to sit on her lap during story time. When first introduced to this observer, the child W casually walked over and began talking, showing no hesitation.

When on the playground, he was often observed watching the other children play. He would walk over to see what another child was playing with, and then walk away to play by himself again. Not only would the child W carefully watch his peers, but he also showed compassion for them when another child was hurt. When a child fell off a swing, the child W sat down next to her, said “It’s okay,” and then pointed to his knee saying “ouch” just like his injured playmate.

Assessing the child W’s cognitive skills, this observer noticed that he engaged in make-believe play, using simple actions like pretending to drive a car or cook in the kitchen. The child W could solve simple problems, such as backing up his bike after hitting a wall; he would also imitate his teachers, like pretending to position the doorstopper to prevent the door from closing.

This observer cannot accurately assess the child W’s ability to find hidden objects, and sort objects into categories, because the child was not observed performing these tasks. Along with the child W’s cognitive skills, this observer believes that his language skills were developing typically as well. The child used a growing number of words and was able to put some words together making short phrases. He paid attention to and participated in conversations with his peers and teachers.

The child W showed typical development in his gross motor skills, but seemed to be lacking in his fine motor skills. The child was observed walking, running, jumping, hopping, and pushing riding toys with his feet.

The child W performed at a three- or four-year-old’s level when pedaling and steering a toy car (Berk, 2008). However, when it came to more fine motor skills and self-help activities, such as putting on his jacket or connecting blocks together, the child W struggled. Lastly, when assessing the child’s social and emotional skills, this observer believes that the child is developing as expected in the areas of seeking support of familiar adults, watching and playing briefly with other children, and showing awareness of other children’s feelings.

The child also demonstrated self-control when other children tried to take a toy from him. However, this observer believes the child W relies too heavily on teachers for help when trying new things and needs to develop a healthy cautiousness toward unfamiliar adults. Overall, in the opinion of this observer, the child W was developing as expected for a typical two-year-old. 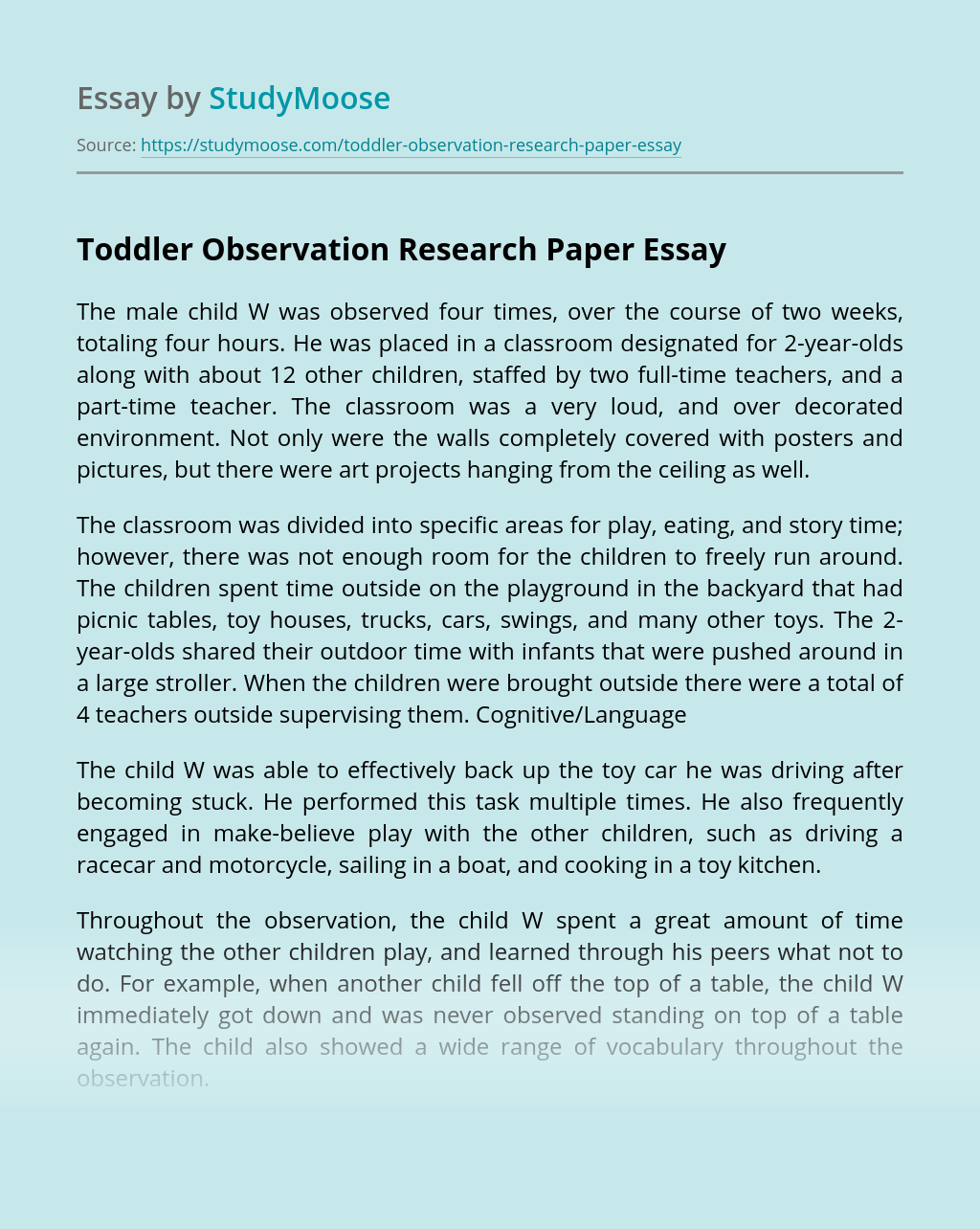 Evaluate the extent to which political compromise contributed to maintaining continuity as well as fostering change concerning sectional tntions in the period of 1820-1861. Sectional tensions had always existed in America, however during the period of 1820-1861 differences in the North and South became so serious that the nation was on the verge of division.... VIEW ESSAY

View sample
The Thoeries of Local Government in Nigeria

Rural development of the grassroots has been the concern of every responsible and responsive political system. This is because development and participation have continued to elude people of the grassroots. Development remains insignificant if it does not positively affect the lives of those in the periphery of decision making arrangement. The Nigerian state therefore created... VIEW ESSAY

José Protasio Rizal Mercado y Alonso Realonda[1] (June 19, 1861 – December 30, 1896, ancestral home: Quanzhou, Fujian[2]), was a Filipino polymath, nationalist and the most prominent advocate for reforms in the Philippines during the Spanish colonial era. He is considered the Philippines’ national hero and the anniversary of Rizal’s death is commemorated as a... VIEW ESSAY

Introduction In today’s society, technological advancements in healthcare has changed the way hospitals provide care and support a comforting environment. Technology has taken over our lives, to the point where many have become dependent on the use of these devices; including healthcare environments. With the use of bedside continuous monitoring, computerized charting, robotics in operating... VIEW ESSAY

Anna Karenina is a novel by the Russian writer Leo Tolstoy, published in serial installments from 1873 to 1877 in the periodical The Russian Messenger. Widely regarded as a pinnacle in realist fiction, Tolstoy considered Anna Karenina his first true novel . The character of Anna was likely inspired, in part, by Maria Hartung ,... VIEW ESSAY