Tuning in for Direct Observation with Child C

Child C is a seven year old boy. It is important at this stage of my intervention to be aware of the issues regarding the ways in which our society treats people at such a young age.

Don't use plagiarized sources. Get your custom essay on
“ Tuning in for Direct Observation with Child C ”
Get custom paper
NEW! smart matching with writer

It is difficult for a child’s voice to be heard; therefore it is essential that I listen and advocate on his behalf if necessary.

It is important that I have a good understanding of the relevant legislation and policies and procedures which relate to Child C.

The Children (NI) Order 1995 underpins all work with children and young people to ensure safe and effective practice.

I recognise the welfare of the children and young people I work with is of paramount consideration. (Article 3)

The Children (NI) Order 1995 recognises that children have the right to be safeguarded from sexual, physical, emotional abuse and neglect.

“It shall be the general duty of every authority to safeguard and promote the welfare of children within its area who are in need; and So far as is consistent with the duty, to promote the upbringing of these children by their families, By providing a range and level of personal social services appropriate to those children’s needs”

United Nations Conventions on the Rights of the Child, Article 2 – seeking the views and wishes of the child.

Data Protection Act (1998) I would advise the child that information from the sessions would be recorded on agency files. Also advising the child that they could access their files at any time. This complies with the NSPCC’s policies, standards and principles.

“Service user should be advised that a system for record keeping exists and the purpose for this” (NSPCC, PSP’s)

In relation to Child C the following principles and standards must be adhered to in order to ensure good practice.

Principle 3 standard 2 – ‘ Service users are provided with information which allows them to make informed choices about receiving a service’ Principle 4 Standard 3 – ‘ A holistic assessment of the therapeutic needs of the service user is made and is used to inform all work subsequently undertaken’ Principle 4 standard 2 – ‘all service users and particularly children are entitled to therapeutic services which are led by the concerns they bring, proceed at their pace, take account of their level of understanding

Counselling – The counselling should be time limited with clear specific tasks and goals which will try and ensure that child C continues to be motivated and involved. The sessions would be used to discuss and measure how child C is getting on and what he has been able to achieve between sessions.

Psycho Sexual Development – based on the work of Freud.
Erikson’s Life Span Approach – provides another map of development. Piaget – developed a framework for child development based on the cognitive approach to understanding human intelligence. “Piaget sees the child as an organism adapting to his/her environment as well as a scientist constructing his/her own understanding of the world.” (Gross 1996, p626)

Attachment and Bonding – as Child C has been separated from his father, knowledge of Attachment theory may be very relevant.

Thompson’s PCS model – This is a model for understanding Child C’s problems in an anti oppressive view. It determines the landscape in terms of Personal, Cultural and Societal barriers to his full integration and acceptance in society. Use of this model may prove beneficial in determining the context of child C’s problem areas and in ensuring that I will be able to meet best practice requirements within an anti-oppressive framework.

Cognitive Behavioural Therapy – is concerned with helping people form realistic expectations and challenging negative assumptions that have been accepted too readily. Work is given to service users so they can test elements of this intervention themselves between sessions, practice their skills and test out conclusions in their real life situations. This model of intervention is also mixed with client centred counselling, which operates on the thinking that people tend to move towards healing on their own especially if the counsellor; Listens and tries to understand how things are from the service user’s point of view. Treats the service user with the utmost respect and regard.

Is “congruent” – which means being self aware, self – accepting and having knowledge of oneself and the client.

Child C is a seven year old boy. Having read through the referral form I am aware that Child C had been displaying aggressive and angry behaviour in school. He comes from an unsettled home life and has experienced a high level of domestic violence within his family home. Child C has spent time living with his grandmother and is currently living in Women’s Aid accommodation. There are also issues regarding maintaining regular contact with his father.

On my initial session with Child C it appeared that his aggressive displays in school had reduced somewhat, following a number of counselling sessions with my colleague.

Following liaising with the Link Teacher in the school and Child C’s mother it appeared that the family dynamics had changed again, resulting in feelings of distress and fear for Child C. It became apparent that Child C had witnessed a domestic incident involving his parents, which resulted in his mother and siblings leaving the family home and seeking refuge and support from Women’s Aid. Mrs C advised that this had been an extremely difficult and stressful time for the family as a whole, particularly for Child C as he has a close relationship with his father.

Child C had been engaging in the service for a number of weeks prior to my first session and it was anticipated that only a few more sessions were required in order to meet the desired outcomes.

Throughout the sessions with Child C it appeared that he really missed living with both his parents, although he recognised that his parents argued often and this was the reason that they were not all living together at this time. However Child C did advise that he would only want the family together if “mummy and daddy would not fight”.

Following consultation with Mrs C it became apparent that domestic violence has been a major feature of her relationship with her husband and that it has been ongoing for the past eleven years. Mrs C advised that her intention at this time is that she will not be re uniting with her husband and she is in the process of initiating divorce proceedings. Mrs C advised that she has finally had enough and fears for her safety with her husband. Mrs C also advised that her husband would never touch his children as he loved them dearly; however she was aware of the emotional impact the violence was having on them. Social Services are also involved with the family and at this time arrangements are being made with the Housing Executive to house the family in another area. A Non – Molestation Order is also in place against her husband, Child C’s father.

From the initial contact it appeared the main issues to be addressed were family life and protective behaviours. The focus of immediate work was to establish a relationship of unconditional positive regard. The strategies used were influenced by Egan’s Eclectic Model of developing an appropriate relationship, formulating an action plan, looking at inner resources and transferring these skills to a fresh situation.

The timescale for counselling was between 4 and 6 sessions. The tools that I employed included play therapy, art therapy techniques, worksheets focusing on establishing a therapeutic and structured discussion. Child C seemed to enjoy the sessions and engaged well. The desired outcome is to support Child C in developing a rapport with an adult and gaining an understanding of protective behaviours and the support network Child C has around him, to enable him to deal with difficult situations in the future.

The main risk is Child C deciding not to engage with the service. As counselling is voluntary Child C may decide not to attend. Also, if the need for a child protection issue needs to be passed on arises, the relationship between Child C and I may be jeopardized.

I feel that my previous sessions have gone well, however I am slightly apprehensive regarding this session, as it will be observed by my practice teacher.

I do feel that we have established a good working relationship and that Child C is comfortable discussing his issues and concerns in my company, however this has developed over a number of sessions, initially both of us were quite anxious.

As a student social worker I still feel slightly apprehensive about working in a counselling capacity as it is new to me; however I feel that increasing my knowledge in this area has helped reduce my anxieties.

I fully appreciate that Child C may ask questions that I am unable to answer. I will ensure that I advise Child C that this is the case and that I will seek advise on the matter from my team manager.

Tuning in for Direct Observation with Child C. (2016, May 15). Retrieved from http://studymoose.com/tuning-in-for-direct-observation-with-child-c-essay 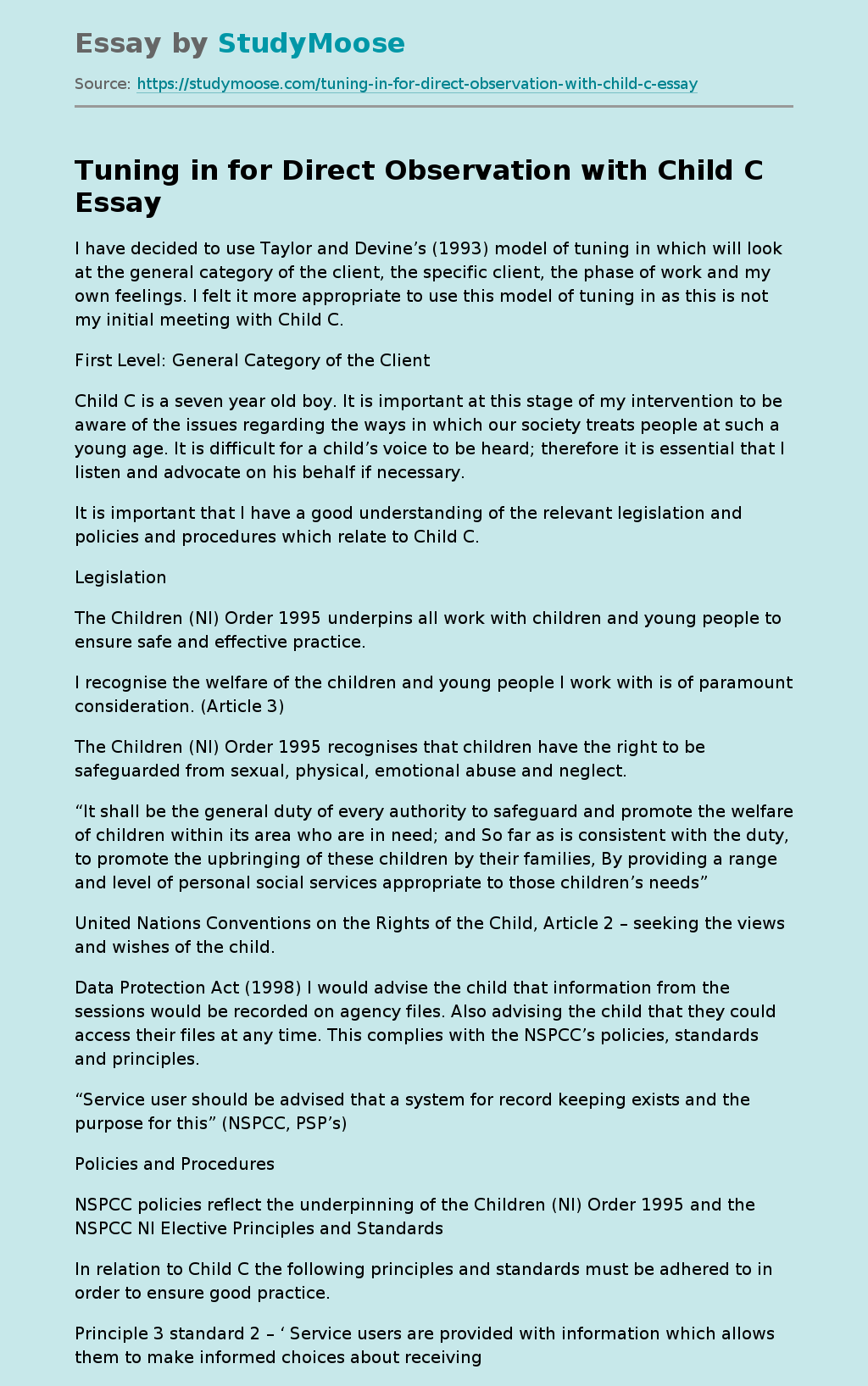