Thirty years ago Starbucks was a single store in Seattle’s Pike Place Market selling premium roasted coffee. Today it is a global roaster and retailer of coffee with over 7,000 stores in U.S. and outside U.S. Starbucks Co. set out on its current course in the 1980s when the company’s director of marketing came back from a trip to Italy enchanted with the Italian coffeehouse experience. Schultz persuaded the company’s owner to experiment with the coffeehouse format-and the Starbucks’ experience was born.

The basic strategy was to sell the company’s own premium roasted coffee, along with freshly brewed espresso-style coffee beverages, a variety of pastries, coffee accessories, teas, and other products, in a tastefully designed coffeehouse setting.

The formula met with spectacular success in the United States, where Starbucks went from obscurity to one of the best known brands in the country in a decade. (Hill, 2003)

The Company’s objective is to establish Starbucks as the most recognized and respected brand in the world. Starbucks purchases and roasts high-quality whole bean coffees and sells them along with fresh, rich-brewed, Italian style espresso beverages, a variety of pastries and confections, and coffee-related accessories and equipment — primarily through its company-operated retail stores.

In addition to sales through our company-operated retail stores, Starbucks sells whole bean coffees through a specialty sales group and supermarkets. Additionally, Starbucks produces and sells bottled Frappuccino® coffee drink and a line of premium ice creams through its joint venture partnerships and offers a line of innovative premium teas produced by its wholly owned subsidiary, Tazo Tea Company.

The Company divides its operation into two segments, United States and International, each of which include Company-operated retail stores and Specialty Operations.

The Company’s retail goal is to become the leading retailer and brand of coffee in each of its target markets by selling the finest quality coffee and related products and by providing superior customer service, thereby building a high degree of customer loyalty. Starbucks strategy for expanding its retail business is to increase its market share in existing markets primarily by opening additional stores and to open stores in new markets where the opportunity exists to become the leading specialty coffee retailer.

Larger stores carry a broad selection of the Company’s whole bean coffees in various sizes and types of packaging, as well as an assortment of coffee and espresso-making equipment and accessories such as coffee grinders, coffeemakers, coffee filters, storage containers, travel tumblers and mugs. Smaller Starbucks stores and kiosks typically sell a full line of coffee beverages, a limited selection of whole bean coffees and a few accessories such as travel tumblers and logo mugs. Approximately 1,200 stores carry a selection of “grab and go” sandwiches and salads. During fiscal 2003, the Company’s retail sales mix by product type was comprised of approximately 78% beverages, 12% food items, 5% whole bean coffees and 5% coffee-making equipment and accessories.

Starbucks Specialty Operations strive to develop the Starbucks brand outside the Company-operated retail store environment through a number of channels. Starbucks strategy is to reach customers where they work, travel, shop and dine by establishing relationships with prominent third parties that share the Company’s values and commitment to quality. These relationships take various forms including licensing arrangements, foodservice accounts and other initiatives related to the Company’s core businesses. In certain situations, Starbucks has an equity ownership interest in licensee operations. During fiscal 2003, specialty revenues (which include royalties and fees from licensees as well as product sales derived from Specialty Operations) accounted for approximately 15% of total net revenues.

The US coffee-bar market may be reaching saturation. Further, Starbucks’ store base is also maturing, leading to a slowdown in the growth of unit volume and firm profitability. In response, Starbucks has turned its attention to foreign markets for continued growth.

Starbucks mission for international development is to be a global company, making a difference in peoples’ lives by leveraging our brand and the coffee experience to foster human connections. The Starbucks Experience is about passion for a quality product, excellent customer service, and people.

The Company’s objective is to establish Starbucks as the most recognized and respected brand in the world. To achieve this goal, the company plans to continue rapid expansion of its retail operations, to grow its Specialty Operations and to selectively pursue other opportunities to leverage the Starbucks brand through the introduction of new products and the development of new channels of distribution.

In doing global business, Starbucks greatly consider local culture as mentioned by Howard Schultz that Starbucks remain highly respectful of the culture and traditions of the countries in which we do business. Starbucks also recognizes that its success is not an entitlement, and Starbucks must continue to earn the trust and respect of customers every day.

In 1995, the firm established a subsidiary called Starbucks Coffee International Inc. This group is responsible for all Starbucks business development outside North America, including developing new businesses, financing and planning stores, managing operations and logistics, merchandising, and training and developing Starbucks’ international managers.

Starbucks’ first non-North American store was opened in 1996 in Tokyo. Starbucks initially used licensing agreement for its global strategy. Because Starbucks wanted to control business strategy in Japan market, it changed the strategy by establishing joint venture with a local retailer, Sazaby, Inc. Then, Starbucks licensed its business format to the joint venture company.

After entering into the Japanese market, Starbucks increased the pace of international expansion significantly. In 1998, Starbucks acquired Seattle Coffee Company in the United Kingdom, a chain with more than 60 retail locations. That same year, it opened stores in Taiwan, Thailand, New Zealand, and Malaysia. In 1999, Starbucks opened in China (Beijing), Kuwait, South Korea, and Lebanon. In 2000, it entered another seven markets (China – Hong Kong and Shanghai, Dubai, Australia, Qatar, Saudi Arabia, and Bahrain). It added three markets in 2001 (Switzerland, Israel, and Austria). In 2002, another nine markets were opened (Oman, Spain, Indonesia, Germany, Southern China – Macau and Shenzhen, Mexico, Puerto Rico, and Greece).

In Asia, the most common strategy used by Starbucks was under licensing agreement. But due to similar reason such as in Japan, Starbucks converted licensing format to joint venture or wholly owned subsidiaries. Thailand, for example, Starbucks acquired its licensee operator to gain control over the expansion strategy in Thailand. In South Korea, Starbucks chose to use joint venture.

As of At fiscal year end 2003, the Company had a total of 1,257 licensed retail stores in 28 countries managed by the Company’s international divisions and located as follows:

Starbucks is well on its way to becoming a global brand. According to Business Week The Starbucks name and image connect with millions of consumers around the globe. It was one of the fastest-growing brands in a Business Week survey of the top 100 global brands published August 5 [2002]. But becoming a global company is not without risks. Global expansion poses huge risks for Starbucks. For one thing, it makes less money on each overseas store because most of them are operated with local partners. While that makes it easier to start up on foreign turf, it reduces the company’s share of the profits to only 20% to 50%.”

Occupancy costs and store operating expenses are sometimes higher internationally than in the United States due to higher rents for prime, inner-city store locations or due to local laws that make it more expensive to retain or terminate employees. The Company’s International operations are also subject to the inherent risks of foreign currency fluctuations and changes in economic, social and political conditions. Because the Company’s International operations are in an early phase of development and have country-specific regulatory requirements, they require a more comprehensive field organization, compared to the United States, to provide resources and respond to the business needs in each region.

Starbucks can simply choose licensing for all international expansion. This method will reduce possibility that company absorbs operating loss from business partners. By licensing its format, Starbucks gain license fees and royalty from licensee. Another benefit is that license agreement requires relatively low initial investment for company. This will greatly improve company cash flow.

However, behind the some benefits, licensing also has disadvantages. Company can not hope tight control over licensee for business strategy or marketing. For company like Starbucks which has aggressive business passion, license agreement doesn’t provide sufficient freedom to develop potential market. Another reason is that company know-how need to be delivered. Starbucks has competitive advantage in valuable management knowledge related to branding and operations of retail coffee stores. The other reason is that licensing opens possibility for potential foreign company’s competitors to learn about company’s know-how.

Though Starbucks triumphed in North American, the other international segment hasn’t significantly contributed to Starbucks’ income yet. This was partially contributed by International’s proportionate share of net losses in Starbucks Japan reporting an annual net loss of $3.87 million.

Japan market is a good example. With 486 stores, it is easy to find Starbucks logo in Japan, the site of its biggest expansion outside the US. The issue worrying investors is over saturation. Starbucks are vying for too few customers in Japan where also has so many coffee shops.

Starbucks should consider about its strategy for international market. In U.S. and Canada market, the strategy to blanket an area completely, even if the stores cannibalize one another’s business, might be applicable. But for each international market, which has unique regional and community acceptance, the strategy shouldn’t be so aggressive. Furthermore, Starbucks should address local taste in every region. For example, in Asia country such in Japan and China, people have more long experience to drink tea rather than coffee. Therefore, demands on coffee beverages in those regions are different from market in North America.

One of the traditional of French cafe life – the small, china cup of strong, black coffee – is under assault from a giant of American cultural globalization. France’s first Starbucks coffeehouse opened on January, 2004, giving Parisians a smoke-free – but generally more expensive (An espresso at a counter of a French cafe typically sets you back $1.25, while a shot of coffee costs $2 at Starbucks and a medium caramel frappuccino, for example, goes for $5.62.). Starbucks offers a new café atmosphere which will sweep away a centuries-old addiction to espresso coffee and croissants in a noisy cafe spiced with the smoke of Gauloise. In the world’s cafe capital, the Seattle-based chain has much the same feel as anywhere else: there are comfortable sofas, and the soundtrack is jazz music and frappuccinos in the blender.

However, with an increasing number of young French people living and traveling abroad, the company hopes its concept of bright, friendly coffee bars will find a warm welcome among those who dislike grumpy barmen and cigarette smoke. Starbucks is confident that a younger generation holds the key to financial success, but the figures show that even they haven’t completely abandoned the idea of corner cafes. Only 15 percent of clients to French coffee bars have their coffee to take away. The rest prefer to take a seat and drink it there. 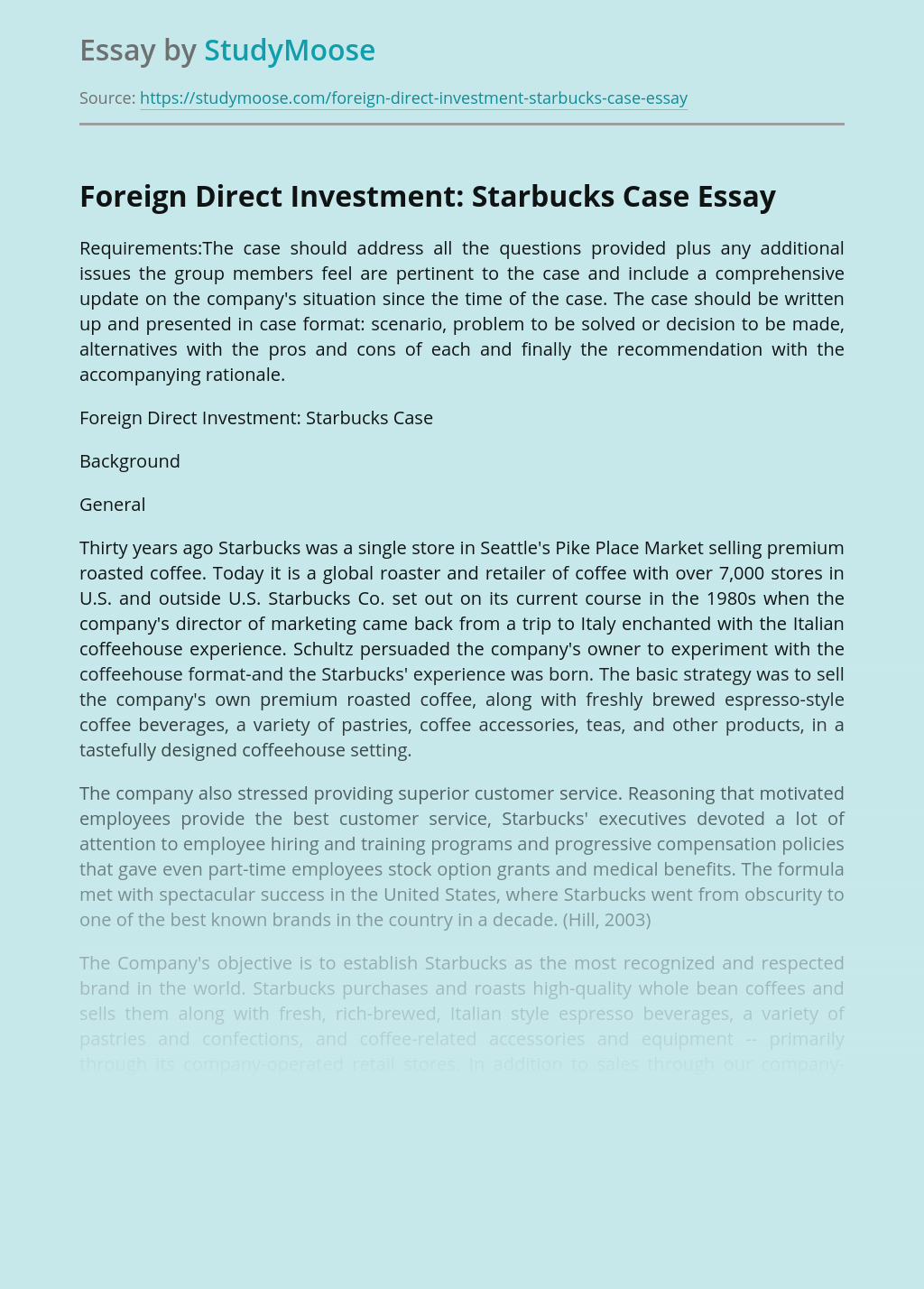