To start off ecology and chemistry have many related

To start off ecology and chemistry have many related environmental issues. One example would be oil spills that contaminate the aquatic. The largest oil spill in history was in the Persian Gulf, Kuwait on January 19th, 1991. During the gulf war, the forces from Iraq kept the American soldiers from landing in their area by leaving valves open on an offshore oil terminal and dumped the oil that was used in the tankers as a way to prevent the American to get thru to them.

Don't use plagiarized sources. Get your custom essay on
“ To start off ecology and chemistry have many related ”
Get custom paper
NEW! smart matching with writer

The spill was 380-520 million gallons of oil and ended up spreading 4,000 square miles in the Persian Gulf. As a result, the crude oil spill created permanent damage to coral ecosystems and local fisheries around the area. The oil is made up of many different components that have various chemical properties. Hydrocarbons are found within this oil which has less as 1 carbon atom to over 50. There are four different types of hydrocarbon molecules that are found in the chemical, paraffin, aromatics, asphaltic and naphthenes.

These characteristics combined with controlled reactions is how we are able to have access to products such as propane and butane, which are used in real life for heating and refrigeration while butane is used for road construction. Some physical properties that the chemical cleaners need to determine before they start cleaning up the spill are density. It’s important to find what the density is of the oil is because it impacts the power that is required to pump or extract the bad fluid out of the water and separate it.

Another physical factor that the workers look at before starting is viscosity. Any calculation that is involved with the movement of fluid (oil) needs a value of viscosity. By determining this cleaner can find out the resistance of the oil flowing in the lubrication of surfaces that can contaminate other areas. This issue affects the aquatic animals the most. The food chain underwater to break up because most organisms died which ends up leaving the food chain to be unstable because there is no biodiversity in the ecosystem. The ones that did live ended up dying probably because either all the food was poisoned or there was just nothing to eat. Along with the loss of animals, Kuwait’s economy went low. The body of water was Kuwait’s main attraction for fishing or just even to visit. After this ‘incident’ occurred many tourists didn’t come to visit till 22 years after.

C3: Demonstrate an understanding of the properties of common elements and compounds, and of the organization of elements in the periodic table

.B1. assess the impact of human activities on the sustainability of terrestrial and/or aquatic ecosystems, and evaluate the effectiveness of courses of action intended to remedy or mitigate negative impacts;

Under technology comparing ecology with chemistry, an example would be the dialysis process machine. Recently one of my relatives was diagnosed with kidney disorder (dysfunction) and was introduced to a procedure called the dialysis. The purpose of this method is to remove the unwanted small molecules that are found in the body such as slats, reducing agents, or dyes from the macromolecules such as proteins and DNA because the kidney is too weak to get rid of waste in your body all alone. The solution is a chemical compound made up of mostly water mixed with types of sodium, potassium, and chloride. While I was researching in detail about this treatment I realized that dialysis is a process that can connect to osmosis as well. Osmosis is the process where there is a diffusion of a solvent thru a membrane with a higher concentration. Osmosis happens mostly with water and cells. If the medium has a higher water concentration, the cell around it will absorb all the water. The solution bags are connected to the patient thru a technological machine which pumps the water solution in the patient and afterward the solution stays back at it removes the bad impurities that were found in the blood. Kidney damage can occur in many different ways. One way that you can injure them is having exposure to mercury. Mercury is a chemical element on the periodic table (hg) with the atomic number of 80. It’s a metal poisoning that you can find in eating fish and dental teeth fillings. Since fish is generally higher up in the food chain, it has a higher level of mercury. Speaking of fish there are many health benefits of fish oil. According to many studies using fish oil long term can help to slow the loss of kidney function with patients with IgA nephropathy which is a form of a disease found in your kidney. It’s also researched that fish oil (remedy to negative impacts such as consuming mercury) helps with reducing the amount of protein in the urine of people that developed kidney diseases due to diabetes.

C1: assess social, environmental, and economic impacts of the use of common elements and m

compounds, with reference to their physical and chemical properties

B3. demonstrate an understanding of the dynamic nature of ecosystems, particularly in terms of ecological balance and the impact of human activity on the sustainability of terrestrial and aquatic ecosystems.

Lastly, ecology and chemistry within the society are preserved food. The society now is so lazy to even do things such as eat or make healthy food. Instead, we just open cans of soup, boil it, and eat it I was researching thru daily chemicals that are bad but we humans supposedly consume. We all think of canned food as a piece of food that lasts long and never spoils or expires. Do you ever think about the chemicals that are used that does make it last long? Or what is the can itself is made out of? The most harmful thing is that the inner plastic lining in the can is poisonous because the plastic inside is coated with bisphenol which is a substance made out of crude oil. This toxic chemical when consumed can cause a variety of different health issues starting from hypertension, obesity to something serious such as cancer or heart disease. Although this disease only happens it fits eaten on daily basis researchers say you should stay away from canned food in general. Eating too much food stored in an aluminum can cause depletes damages to your body minerals. Exposing your brain to loads of aluminum will eventually let the metal to pass thru to the blood-brain barrier to accumulating in different areas of your brain. The high levels of aluminum can cause toxic damages to the cells and over time the metal will end up competing with the other minerals that your brain actually needs in order to function efficiently. Aluminum is a chemical element in the periodic table (atomic number 13) and is what most soda cans, soup cans, and dog food cans are made out of. According to the environment protection agency, aluminum cans are the largest source of cans in the water stream. In 2008, in united states, the country generated about 2.7 million tons into the waste stream and ended up causing a lot of damage to the area. The economic impact that canned food industry has on Americans is that in united states have 90, 000 customers with 400, 00 jobs in supplier. Not only does canned food industry create good jobs only in united states, but it was also once $137.13 billion in total economic activity and all of America. The actual process of creating the can (aluminum) is found by the act of mining which causes deforestation, pollution, polluting water bodies (aquatic) and a threat to animals lives. These actions make the ecosystem less stable because sustainability is the indicator of the health of the ecosystem. Since pollution in water and land occur during mining, there will be less biodiversity which makes it less stable because there are fewer genes and species in the ecosystem.

To start off ecology and chemistry have many related. (2019, Nov 17). Retrieved from https://studymoose.com/to-start-off-ecology-and-chemistry-have-many-related-759-example-essay 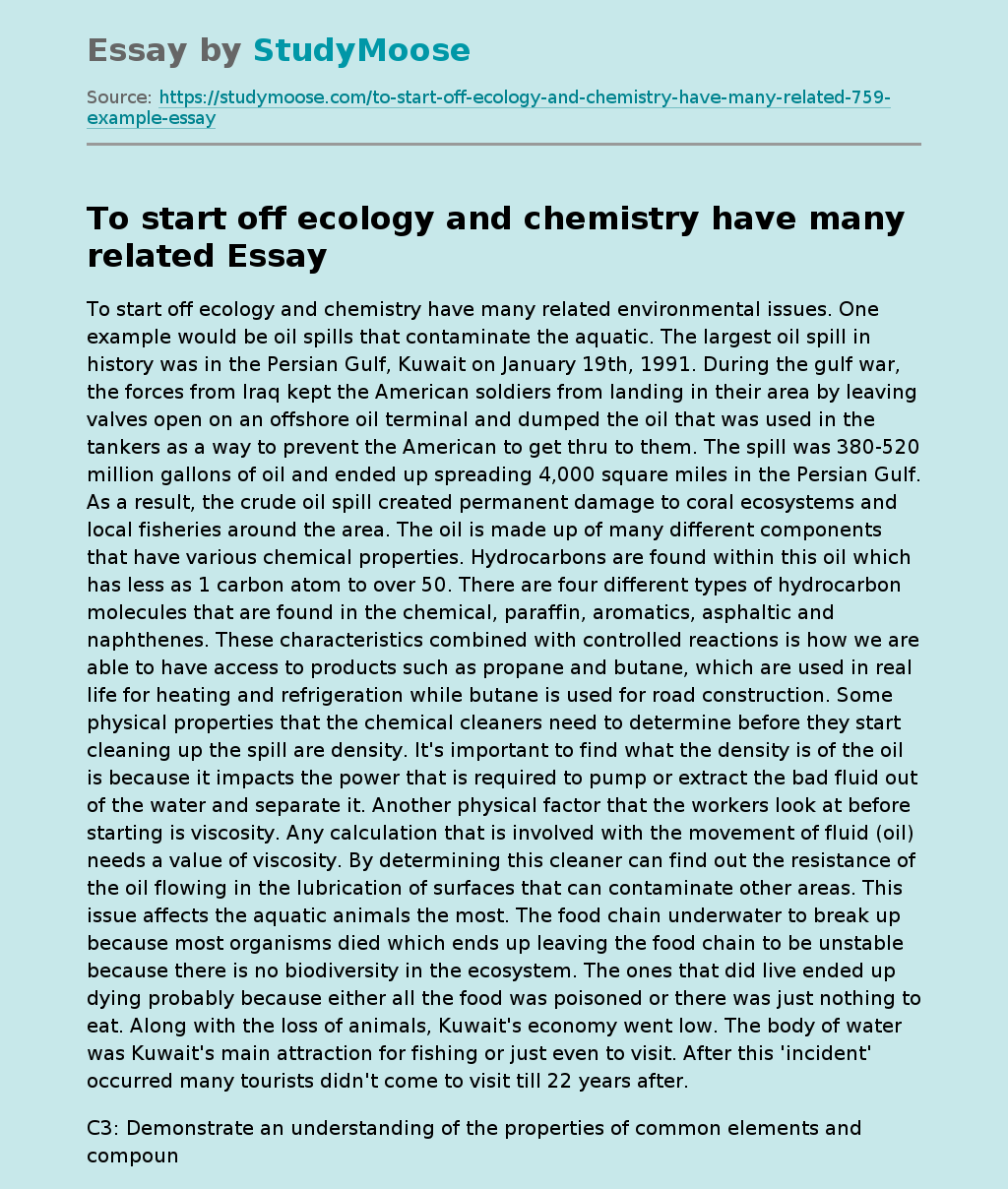