Related Literature and Review of Related Studies for Fertilizer

Commonly known as ‘Styrofoam’ that is one of the most widely used type of plastics. It is a strong plastic created from erethylene and benzine that can be injected, extruded, or blow molded; making it a very useful and versatile manufacturing material. It is also a rigid, transparent thermoplastic, which is present in solid or glassy state at normal temperature. But, when heated above its glass transition temperature, it turns into a form that flows and can be easily used for molding and extrusion.

Don't use plagiarized sources. Get your custom essay on
“ Related Literature and Review of Related Studies for Fertilizer ”
Get custom paper
NEW! smart matching with writer

It becomes solid again when it cools off.

This property of polystyrene is used for casting it into molds with fine detail. Pure polystyrene polymer is colorless and hard with limited flexibility. Polystyrene is hard and brittle and has a density of 1. 050 g/cm3. It is represented by the chemical formula, C8H8. It have very low impact strengths of less than 0. 5ft-lb. commercially available impact polystyrene grades can be obtained with values of 1. 0 – 4. 0 ft-lb. Generally, polystyrenes are not produced with greater than 15% total rubber because of polymerization processing constraints.

Nevertheless, impact properties can be increased substantially without additional rubber by the proper control of rubber particle size, percentage of grafting, cross-linking, and percentage of gel. Flexural strengths for polystyrenes can be obtained from 5000 to 18000psi and are also decreased by the addition of rubber and other additives to the polystyrene. Elongations can be obtained from 1% for crystal polystyrene to 100% for some impact polystyrene grades. Eggshells The calcium carbonate is the one that gives egg shell its hardy strength – a common substance found in rocks.

The team found that calcium carbonate made up almost 98 per cent of an egg shell. The remaining two per cent comprises proteins which act as the “cement” to hold the calcium carbonate together. The organic matter of eggshell and shell membranes contain proteins as major constituents with small amounts of carbohydrates and lipids (Burley and Vadehra, 1989). Bronsch and Diamantstein (1965) analyzed uronic acid in eggshells and reported a signi? cant correlation between the uronic acid content and the breaking strength of the shell. Uronic acid is a constituent sugar of glycosaminoglycan.

Under the characterization measurements investigated, it was found that the eggshell pore structures of the two biomaterials belong to a typical Type II, indicating that they should be basically characteristic of nonporous materials or materials with macropores or open voids. Further, the chemical composition of the resulting eggshell particle was strongly associated with the presence of carbonate minerals from the Fourier transform infrared (FTIR) spectra. In contrast to the resulting eggshell membrane particle, the presence of functional groups of amines and amides was observable because of its chemical composition of fibrous proteins.

From the isotherm data of methylene blue at 25 °C, the Freundlich model yielded a somewhat better fit than the Langmuir model. The adsorption isotherms revealed the eggshell biosorbents could only uptake the basic dye of less than 1. 0 mg/g in aqueous medium, which was attributed to their poor pore properties. Oyster Shell Oyster-shell are used as construction materials, especially as a mixture for concrete, it is required to quantify the salinity content of oyster-shell, which is the basis of limiting the amount of oyster-shell in the mixture. The salinity content in oyster-shells turns out to be approximately 0. 5%, derived from the proportion of the whole weight of oyster-shell to the total amount of chloride ions (Cl) pertaining to the relevant provision (Yoon, 2000). Converting this to the regulation value of the chloride ions, 0. 3 kgf/m3, the amount of oyster-shell per 1 m3should not be greater than 85. 7kgf. Therefore, assuming that granular materials in the concrete are 700–800 kgf/m3, oyster-shells should not begreater than 10% in the granular materials to preventthe salt damage. Oyster-shell is entirely composed of CaCO3 (approximately 96%) and other minerals of trivial amount.

Various oyster-shells due to sources and individual characteristics are almost similar in the chemical composition. The mineral phase of calcium carbonate turns out to be calcite. Related Studies Foreign Xu, Yi; Jiang, Linhua; Xu, Jinxia; Li, Yang (2012) pointed out that mix proportion parameters of expanded polystyrene (EPS) lightweight aggregate concrete are analyzed by using Taguchi’s approach. The density, compressive strength and stress-strain behavior were tested. The optimal mixture of EPS lightweight aggregate concrete was selected among experiments under consideration to manufacture the lightweight hollow bricks.

According to the study of Sohrab Veiseh1 and Ali A. Yousefi2 (2003) the heavy weight of bricks accounts for the great mass of construction and thus causes more vulnerability against earthquake forces. In the present work, it is, therefore, tried to reduce the density of the bricks, as well as improve thermal insulation properties. Polystyrene foam is one of the substances that is added to the raw materials of bricks, as a pore-forming material. The effect of PSF type and its content in the mix, and also the effect of firing process temperature of the bricks on density, water absorption and compressive strength, are investigated and discussed in this paper.

Tests showed that by increasing the polystyrene foam additive, the compressive strength and density of the bricks decreases, though the water absorption increases. Therefore, it is necessary to specify the ways for improvement and optimization of clay body so that by reducing the density, the strength of the brick is not reduced considerably. Adding even 2% of recycled polystyrene foam keeps the compressive strength of the resulted bricks as suitable for load bearing ordinary bricks according to the Iranian standard.

Rassimi Abdul Ghani, Mohd Hanafiah Abidin, Ahmad Zafir Romli, Mohd Hariz Kamarudin, Zaleha Afandi and Muhamad Faizal Abd Halim (2010) of the Institute Of Science,Uitm,Malaysia pointed out that one of the world’s oldest waste into useful flooring materials. They made tiles from eggshells. Naming the tiles EPoSTi, they made composite tiles by combining polymers and chicken eggshells, an innovation from domestic waste. Explaining their work in an expo, the use of eggshells in micro size will increase the rigidity and stiffness of the composite, making it a suitable flooring material.

This is due to the nature of eggshells which can be used as rigid particulate fillers of the tiles. The combination offers excellent impact resistance, as it is able to withstand force applied to it. In short, it is durable. According to the study of M. N. FreireI, II; J. N. F. HolandaI (2000) in Brazil, the food industry generates every year huge amounts of eggshell waste, and a critical question is to find an adequate use for this waste. The aim of this work is to determine the chemical, mineralogical and physical characteristics of a nonprocessed eggshell waste sample, as well as to investigate its use in wall tile paste.

The sample was analyzed regarding to chemical composition, X-ray diffraction, morphology, particle size analysis, density, organic matter, soluble salts, and thermal analysis. The results indicated that the eggshell waste sample rich in CaCO3 can be used as an alternative raw material in the production of wall tile materials. According to the study of Obrero, F. M. (2005) pointed out that there is possibility of producing ceramics from oyster shells. Powdered oyster shells were used instead of silica in the production of ceramics. The texture, color and durability were compared to those made with silica.

Six kilograms of Vigan clay and 2. 5 kg of ball clay were mixed and soaked in water overnight. The following day, the mixture was kneaded and filtered twice. After this, one kilogram of powdered oyster shell was mixed with the kneaded mixture then kneaded again and filtered. The mixture was placed over Plaster of Paris for the water to be absorbed. The solidified mixture was then rolled and compressed to let the air escape from the spaces inside the solidified mixture. After this, the mixture was molded, air dried for four days and fired in a furnace. Three trials were made at different temperatures — 900oC, 950oC and 1000oC.

There was no signi? cant reduction in the compressive strength up to 40% of dosages of oyster-shell instead of sand. The experimental results demonstrate that oyster-shells can be resources of pure calcareous materials and effective in replacement of sand, indicating promising reusable construction materials. Local Cecilia Amor Fenol, Maria Riza Berna Sabate, Jamie Kathleen Sy, Reah Grace Camongol and Nicole Mejia (2008) pointed out that egg shells can be used as an alternative for sand in making a hollow block.

It is more effective and shows lesser cracks as it is dropped from a height of 2 feet. It can be used to lessen the expenses and at the same time we helped the environment by recycling these egg shells. According to our research, the reason why egg shells are effective in making hollow block is because it contains Calcium Carbonate that gives hardness and strength. We also concluded that this egg shell hollow block can be used to support building so that when earthquake strikes our country, its strength and durability will show.

Related Literature and Review of Related Studies for Fertilizer. (2016, Oct 12). Retrieved from https://studymoose.com/related-literature-and-review-of-related-studies-for-fertilizer-essay 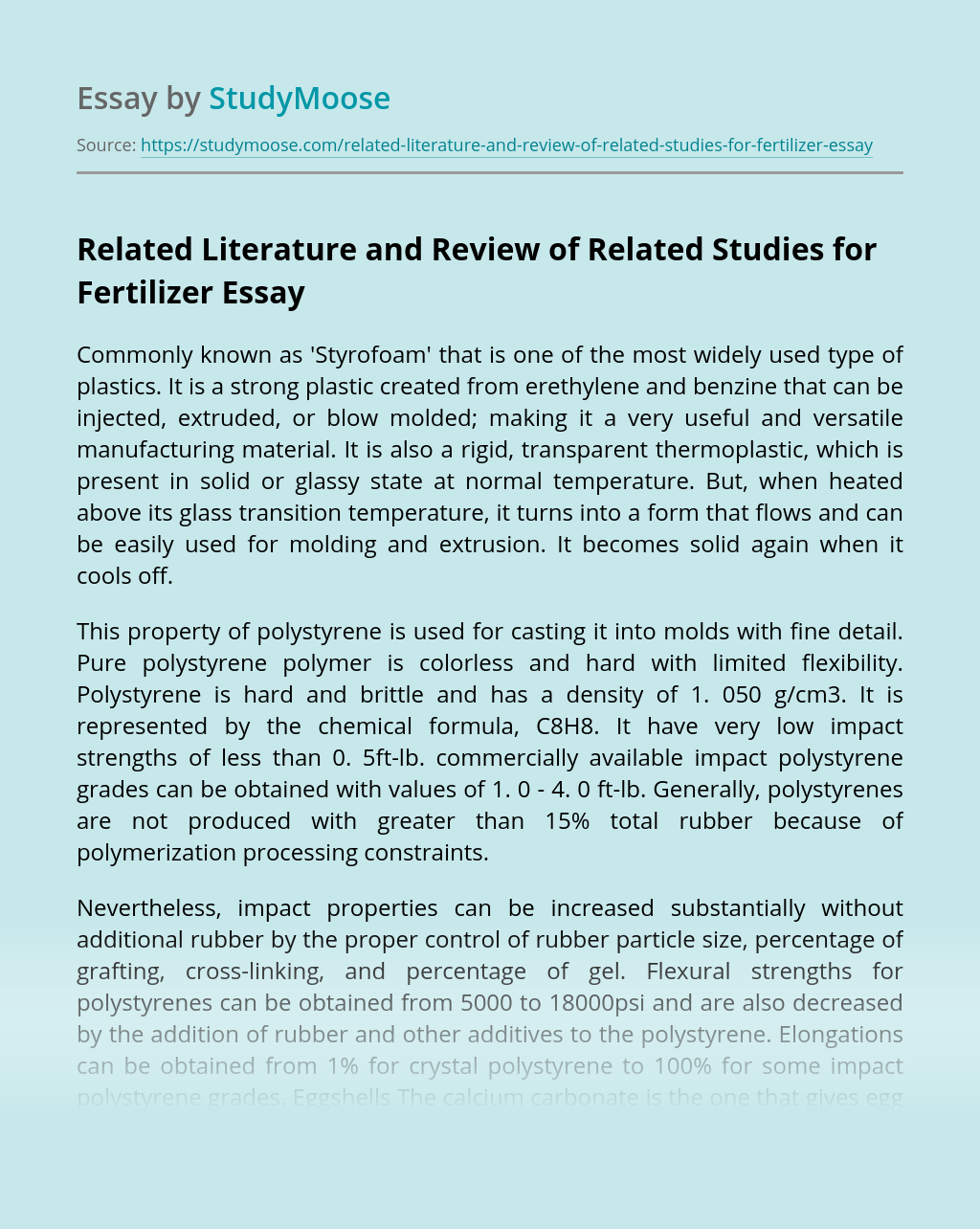