Related Literature
Finger-Print Attendance Checker is more accurate technologies as helpful to people in search of a way to keep track of group activity as biometric and attendance technology.

Don't use plagiarized sources. Get your custom essay on
“ REVIEW OF RELATED LITERATURE AND STUDIES ”
Get custom paper
NEW! smart matching with writer

It have been in search of a way to track the way groups and individuals spend their time in various capacities for ages, and the ability to keep track of attendance has implications for the school sector.

Finger-Print Attendance Checker is school attendance system for instructors. System records attendance data of students based on registered fingerprints. It is interactive GUI for adding efficiency and for automating organization procedures.

Knowledge-Based the simplest application in this sense is for an instructors to use an iris scan or thumb print to let an instructors system know when he/she enters and leaves the faculty or school. There will be an automatic log of the hours worked, and when exactly the instructors were in attendance. There are also applications for instructors to track an activity when in the office. The instructors may be putting in time at work, but through use of physical identifiers. Image-Based Finger-Print Attendance Checker is an end-user biometric system designed to automate attendance control.

The system may be used in a wide range, from instructor’s time tracking to check-in at school.

The NCheck software uses biometric fingerprint to track the time of each user
presence, automatically calculates summary time for each user and generates printable reports. The software is designed for installation on a desktop computer or laptop (PC) that is running under Microsoft Windows. Also the software may be used in kiosk systems that are based on PC hardware with mounted fingerprint scanner and/or camera.

Identity Verification and Entry Control System with Counter is a computer-based system with the help of digital and logical circuit concepts that enables it to have interconnections to other subsystems. A software application will be installed on the computer that serves as the mean of communication of the system to the user and with other system or devices connected to the main system. This enables the user to manage records in the database, generate barcode and generate a summary of individuals that are in the school premises.

Also with these applications, using the computer’s architecture, it enables the system to communicate to other devices in getting input data and acquiring signal outputs. Each student and employee of the school will be issued an identification card with barcode that will be swiped and read by a barcode scanner and a PIN code that will deeply identify their authenticity in order for them to pass through the turnstile. Upon entering and leaving the school premises the counters will increment. The device was composed of two counters namely, entry counters and exit counter, this counter will increment when the turnstile sensors are being triggered. A student or employee will scan his or her bar-coded ID through the scanner to unlock the turnstile first before he or she can enter the building and this will allow triggering the sensor and then the counter is increased.

In recent time, there has been high level of impersonation experienced on a daily basis in both private and public sectors, the ghost worker syndrome which has become a menace across all tiers of government, employers concerns over the levels of employee absence in their workforce and the difficulty in managing student attendance during lecture periods. Fingerprints are a form of biometric identification which is unique and does not change in one’s entire lifetime. This paper presents the attendance management system using fingerprint technology in a university environment. It consists of two processes namely; enrolment and authentication.

During enrolment, the fingerprint of the user is captured and its unique features extracted and stored in a database along with the users identity as a template for the subject. The unique features called minutiae points were extracted using the Crossing Number (CN) method which extracts the ridge endings and bifurcations from the skeleton image by examining the local neighborhoods of each ridge pixel using a 3 x 3 window. During authentication, the fingerprint of the user is captured again and the extracted features compared with the template in the database to determine a match before attendance is made. The fingerprint-based attendance management system was implemented with Microsoft’s C# on the. NET framework and Microsoft’s Structured Query Language (SQL) Server 2005 as the backend. The experimental result shows that the developed system is highly efficient in the verification of users fingerprint with an accuracy level of 97.4%. The average execution time for the developed system was 4.29 seconds as against 18.48 seconds for the existing system. Moreover, the result shows a well secured and reliable system capable of preventing impersonation.

Our project aims at designing an student attendance system which could effectively manage attendance of students at institutes like NIT Rourkela. Attendance is marked after student identification. For student identification, a fingerprint recognition based identification system is used. Fingerprints are considered to be the best and fastest method for biometric identification. They are secure to use, unique for every person and do not change in one’s lifetime. Fingerprint recognition is a mature field to-day, but still identifying individual from a set of enrolled fingerprints is a time taking process. It was our responsibility to improve the fingerprint identification system for implementation on large databases e.g. of an institute or a country etc. In this project, many new algorithms have been used e.g. gender estimation, key based one too many matching, removing boundary minutiae.

Rather than signing an attendance sheet, individuals will pass their thumb over the fingerprint scanner, the finger print is compared against a list of pre-registered users, and once a match is made, the individual will be registered as having attended that lecture. The paper discusses related works in the problem domain; highlights the general overview of the proposed system; details design considerations of the system, both at the hardware and software level; discusses the operation and how the system was tested in conformity to system design and functional objectives; concludes the observations made; and makes recommendations for future improvement.

Monitoring student attendance in the UK has become a prime concern for Universities in recent months, due to a perceived lack of accuracy in reports submitted to the UK Borders Agency and political pressure about wider immigration issues. This project proposes a biometrics-based solution to that concern which also conforms to legislative pressures on data governance and information security, but which can provide accurate, reliable data for the institution to use in future reports to UKBA. All biometric techniques obviate the need to carry a token or card, or to remember several passwords, and reduce the risk of lost, forgotten or copied passwords, stolen tokens or over the shoulder attacks. This project shall focus on using fingerprint recognition, mainly due to the low-cost of devices for deployment and high user acceptance.

Fingerprint recognition has traditionally been used for data access amongst a mobile population with increasingly portable devices, but it can also be employed for monitoring purposes, and this project defines on how it could be used in this context to provide a fingerprint-based student attendance register.

This project set out to overcome the drawbacks of the current attendance system, which can be fooled by “buddy swiping” of absent students RFID card of signing the register sheet on behalf of absentee students within a university. An application was designed within MATLAB to identify pattern in data, extract vectors from a fingerprint image and map values to the new area, then to verify a student who swipes his fingerprint against those values. The requirement was to make this system work asynchronously so that constant internet and database connections are now required, to deliver outstanding rates of accuracy, and to ensure this could work on machines with very low computing power so that it can be utilized in mobile device in the future.

The delivered application uses the Principal Component Analysis method to compare fingerprints with the new form of harmonized data defines by eigenvectors and eigenvalues in dimension. This high-speed method uses the lowest computational power to deliver accurate results through making a
closest match against stored values. This application has potential to be employed as a modular add-on by a Universities student monitoring system or connect to its database and transfer data.

REVIEW OF RELATED LITERATURE AND STUDIES. (2016, Mar 05). Retrieved from https://studymoose.com/review-of-related-literature-and-studies-2-essay 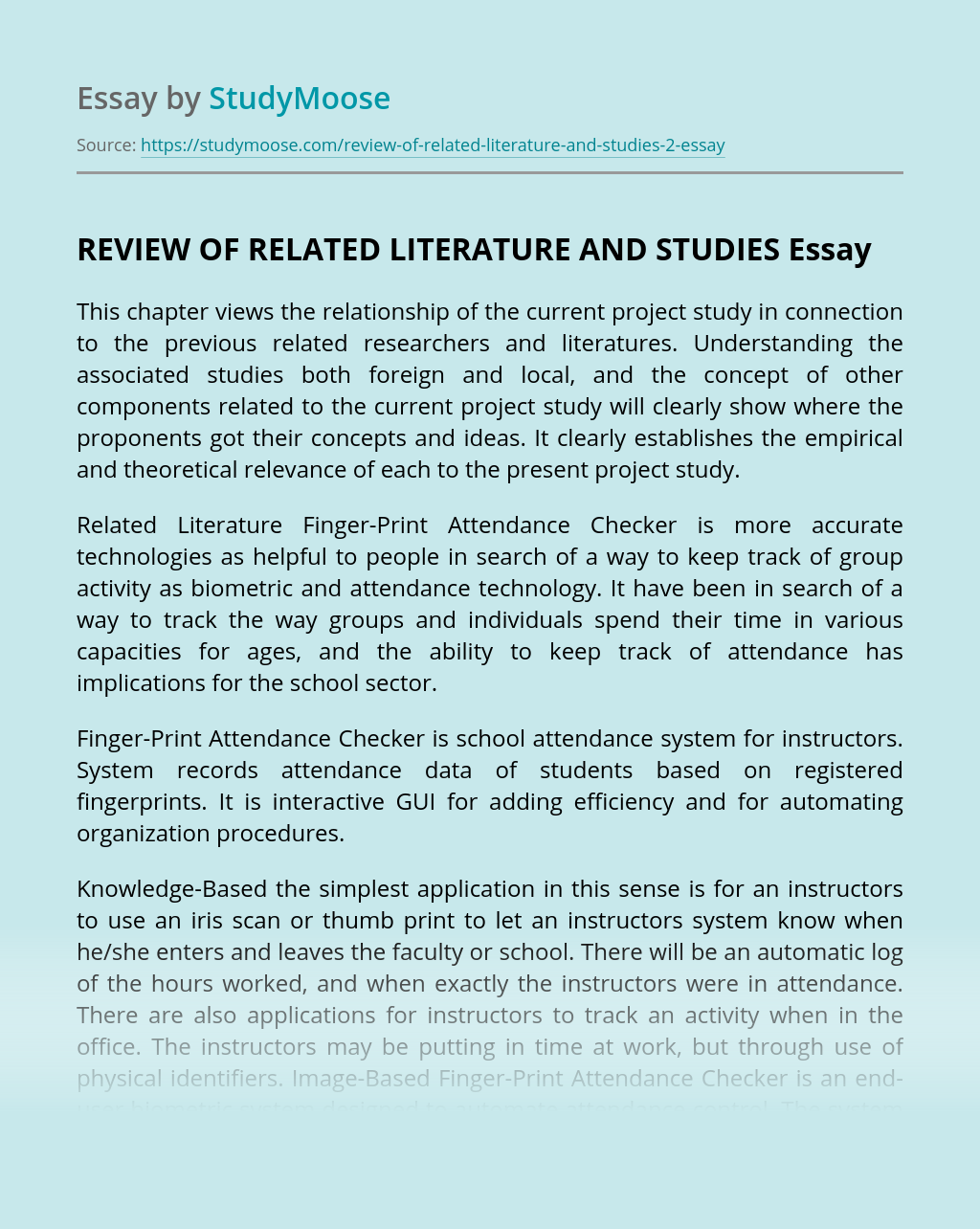