Many, many years ago, during the Middle ages and Medieval era was a big change and start to how life is today in the present. This dates back as far as the year 1066. There were a ton of good things, many changes and some devastating things that happened during this era. Many different things from the major changes to the disasters that were caused during this time period were improve, those include William the Conqueror, the Magna Carta, Crusades, and the Black death.

Don't use plagiarized sources. Get your custom essay on
“ Many many years ago during the Middle ages and Medieval era was ”
Get custom paper
NEW! smart matching with writer

From the start of the achievements to disasters until now, the present has continued to keep on evolving from the past things. During the year 1066, there was a great change to Britain. William the Conqueror conquered the English King Harold. For example, he was in charge of most of the British culture and law, but also brought many French influences on the land. This first started off as the dukes of Normandy, they originally claimed England first and ruled as king in their own rights.

That is later when William took over and conquered King Harold of England in 1066. This was when William became the first Norman king of English and was later known for his name, William the Conqueror. Not long after that, William divided England into fiefs for his Norman barons, ruling as a feudal monarch (p.362). He also provided many influences to England. For instance, the Latin influenced French language spoken by the Norman invaders gradually began to mix with the native Anglo-Saxon (p.362). It was not very long until the English language started to emerge after that.

English compensated by taking majority of things from French, and to this day we still use many other words from different languages that we may need or like. This was the start and was not the last event that made a mark on history. Another significant event that occurred during the Early Middle Ages was the Magna Carta. This time period was still difficult for between the rulers of England and France. On June 15, 1215 the king of England, John was forced to sign the Great Charter. This set a limit on royal authority and gave freeman new rights, this included trial by jury. The Mega Carta was often seen as a critical political document that opened new ways for constitutional monarchy and helped developed democracy in western Europe and eventually moved to modern democracy. The constitutional monarchy that was developed is the same that England has today. There were many great things that happened during the Middle ages, and there were also some bad, devastating things that occurred too. One of the most shocking events during the Early Middle ages was the Crusades. The word Crusade came from the Latin word crux. This referred to a holy war. The Crusades were in charge of organizing a series of military expeditions to recover the Holy Land in Palestine from Muslim occupiers. There was many Crusades that were launched only two were important. The first Crusade launched in 1905 by Pope Urban in an attempt to wrest the control of Jerusalem, and the Holy City of Christianity, from the Turks. This was a terrible failure, many men were lost, money got wasted, and the objective was not accomplished. The second Crusades was better off planned. This happened in 1099 and succeeded in recapturing Jerusalem, only for a little. In 1187 the Turks recaptured the city. There were other Crusades, although they were failures, they still did bring East-West trade and the exchange of ideas and technologies. Another devasting event that later occurred during the late Middle ages was the plague, known as the black death. The plague was one of the most devasting disasters to happen in Europe during the Middle ages. This caused more deaths for more than a third of Europe’s seventy million people. There were many outbreaks of the plague that was carried from over seas and land trade routes to more than half of Europe. The carriers of this disease were fleas that had bitten infected rats, which then they would bite humans. The plague was so dangerous that it could cause death within a few days or even within hours. This disease was horribly contagious, especially being in a society that hade very few knowledge of the cause of sanitation or very few knowledge on the spread of the disease. The plague disease would either infect the blood, lymph nodes or the lungs. This disease caused so much disruption to societies and economies throughout Europe and into Asia and North Africa where the plague had spread by travelers and sea trade routes. The disease caused massive labor shortages, which would feed the social unrest exacerbated by the conflicting interests of landlords and workers. In addition to this, there were also religious effects. In like manner, Boccaccio described how many Florentines abandoned funerals rites and burial rituals as they feared contagion from other infected victims (p.406). This horror turned into something greater to a better preoccupation with death, this was able to give many artistic translations. The cause of this disease has contributed a major impact on the knowledge scientist have whenever it comes to disease, how to treat it and what precautions to take. Furthermore, the Plague is what paved ways for the scientist now, it gave them more to study and learn about. The Middle Ages and Medieval era really did make an impact on history and the spread of knowledge that is known today. With the help of the ancient knowledge and the knowledge that there is now, if it is continued to be used and continues to evolve now or in the future , today or what is yet to come will not have to go through such disasters that the ancient civilizations had to go through. Technology, different words and ideas keep evolving and soon will be better than we know it. Over the many years it has already made such a huge impact on many different societies. Because of this, the present now knows what is known and will continue to evolve for the better with the help of the many scientist, artist, etc.

Many many years ago during the Middle ages and Medieval era was. (2019, Aug 20). Retrieved from http://studymoose.com/many-many-years-ago-during-the-middle-ages-and-medieval-era-was-essay 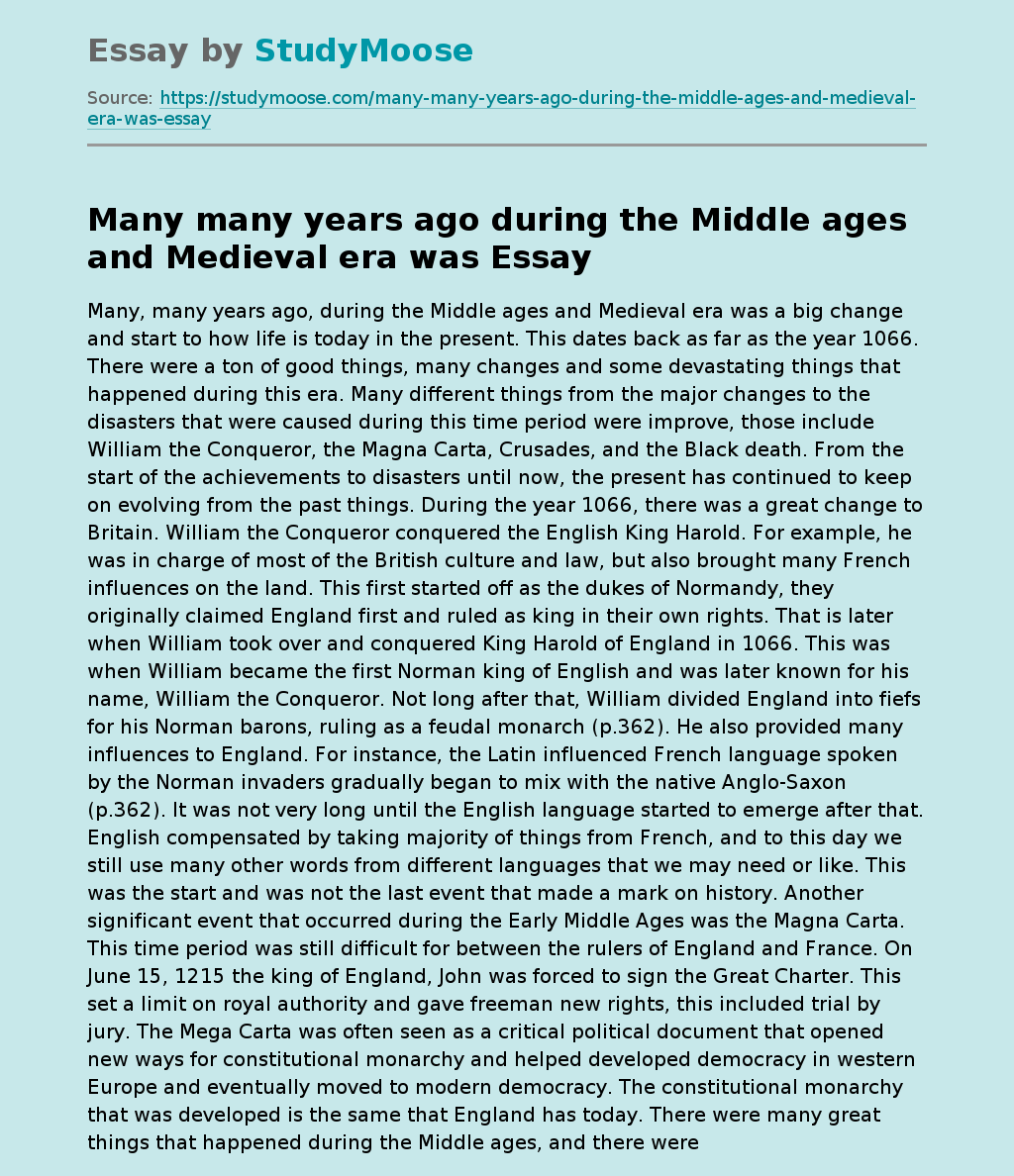