Though Industrial and scientific development has positive effects like raising living standards, improving food product, improving health issues; but at the same time these industrial and scientific advancement has adversely effected the environment and thereby disturbing the balance of the nature. Industries discharge their pollutants and products continuously into the environment, the result of which is that our ecosystem has lost the capability of self maintenance and self regulation. The main cause of ecosystem imbalance is improper discharge of industrial waste and its unhygienic disposal.

Don't use plagiarized sources. Get your custom essay on
“ Though Industrial and scientific development has positive effects like raising living standards ”
Get custom paper
NEW! smart matching with writer

With time it has been realized that the industries are also social units and they have rights and duties towards the society i.e. surrounding community and consumers. The duty of the industry is that they do not harm health of man and nature. Therefore it was necessary to devise some kind of measures to curb the industrial pollution. The World Commission on Environment and Development has suggested in its report that environment cost of the economic activity should be internalized-paid by the enterprises.

Thus it was in the form that enterprises were encouraged to invest in preventive, restorative and compensatory measures. But first time it was agreed by the Organisation of Economic Cooperation and Development (OECD) , to the base of their environmental policies on Polluter Pays Principle. Initially Polluter pays Principle which was recognized as economic and administrative measure to curb environmental pollution problem but recently it is adopted as strong legal measures to restrain the pollution problem.WHAT IS POLLUTION?The worldwide accepted definition or meaning of the pollution is the introduction by man, directly or indirectly, of substances or energy into the environment resulting in deleterious effects of such a nature as to endanger human health, harm living resources and ecosystems, and impair or interfere with amenities and other legitimate uses of the environment.

Though Industrial and scientific development has positive effects like raising living standards. (2019, Aug 20). Retrieved from http://studymoose.com/though-industrial-and-scientific-development-has-positive-effects-like-raising-living-standards-essay 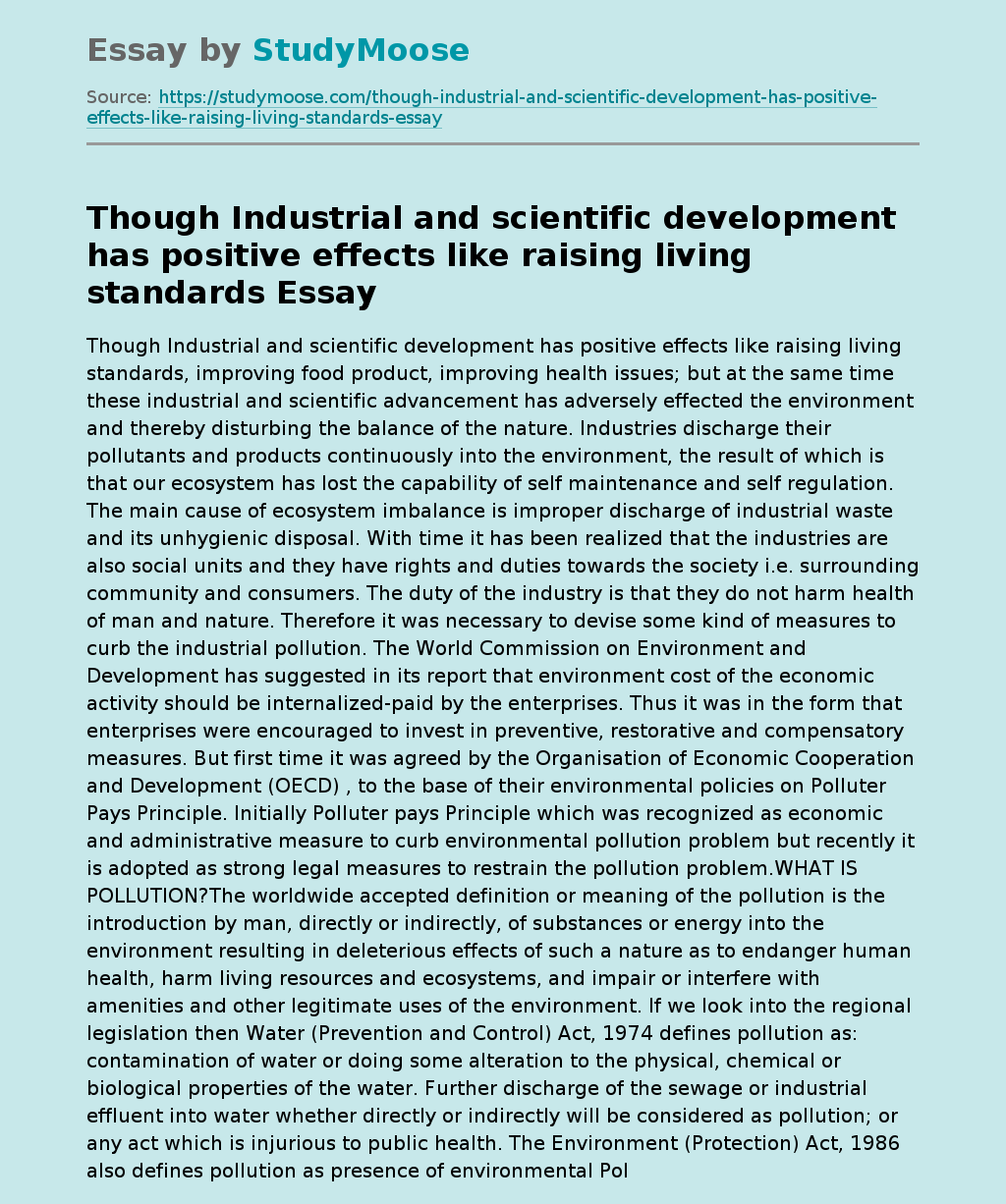