There can be no progress without conflict

The word conflict can be defined as a ‘serious disagreement or argument, typically a protracted one’; a ‘clash of opposing feelings or needs’. On the other hand, progress can refer to a ‘forward or onward movement toward a destination’. There is no doubt that when these two words are put in juxtaposition, there is a clash in ideas; a conflict if one will. A prolonged difference is vastly in contrast with the concept advancement and forward change; yet, history has shown that these two ideas have worked hand-in-hand in contributing to the growth of everyday society, whether it were a miniscule victory or large-scale crusade.

Don't use plagiarized sources. Get your custom essay on
“ There can be no progress without conflict ”
Get custom paper
NEW! smart matching with writer

While not all conflict is conducive to progress, there can be no progress without a little bit of conflict.

Galileo Galilei, the protagonist of Life of Galileo, was put at odds with himself, forced to face an internal conflict. He was a university lecture by occupation, but was first and foremost a researcher, specifically interested in astrology.

However, Galileo was financially struggling. In order to advance his findings, he found himself in a personal predicament; to lie about inventing the telescope to gain 500 scudi. Unashamedly, Galileo fabricated that it was his own invention to procure the extra funding. Although this deceptive act caused dispute, both within Galileo, and later on in the play with the Procurator, it demonstrated the need for conflict to enable progress. Galileo so blatantly stole someone else’s invention, as he saw it as an opportunity to help himself and the greater society by advancing his own research, rather than an issue of moral responsibility.

By pushing aside this conflict, he was able to progress his learning and find evidence of a heliocentric solar system, rather than the geocentric model advocated by the Church. Furthermore, the extra 500 scudi allowed Galileo to continue to subsist- moving him forward from his financial troubles. When he was confronted by the Procurator for lying about the contraption, Galileo approached the conflict nonchalantly, ignoring the ethics, and moreover, the embarrassment faced by the University because of the “revolutionary discoveries about the universe” he found. While these discoveries were ignored by the Procurator, Galileo brazenly ignored the conflict at hand in order to investigate on his own accord, gaining progress in astrology and the knowledge of the universe.

As demonstrated, internal and interpersonal divergence can enable progress to ensue. Correspondingly, conflict can be essential in bringing forth underlying issues, allowing a need for progress to be realised. In Life of Galileo, Galileo’s heliocentric model was at odds with the Church’s geocentric concept. Although Galileo had scientific evidence and reason to support his theory, the Roman Church had overwhelming power during this time, causing the oppression of any beliefs that contradicted with their own. Any form of blasphemy against the Church struck fear in society, a reason for which caused Galileo to recant his research, as well as his own fear of the church’s torture methods. This difference between science and religion brought light to a need for change in society’s view of science at the time in order to overcome religion’s regressive beliefs. Without this conflict, this recognition for progress would not have been identified.

Similarly, global conflicts and world-wide wars have highlighted areas where progression needs to occur, for example, issues such as racism. Historical events such as the British Invasion on Australia emphasized the discrimination the Caucasian race held towards the Indigenous people- causing them to overrule their native land and deem it their own. This distaste went as far as an attempted genocide on the Tasmanian Aboriginal people. Although this event history did not directly cause progress to occur, especially as racism is still very present in today’s society, it allowed this issue to surface. Two hundred years later, Australia has demonstrated shame in this conflict, and all attempts in trying to move forward from this history and prevent it from ever reoccurring in the future. To illustrate, Kevin Rudd’s famous “Sorry Speech” in 2008 apologised for the mistreatment of the Indigenous people and their land in an effort to “[right] the wrongs of the past” and “[move] forward with confidence to the future”. Henceforth, while the conflicts from two hundred years ago did not enable progress at the time, their prejudice mistakes brought forth a need for progress to be realised, allowing effort to be put in to evolve from the past.

Although conflict is vital in facilitating change, not all disagreements necessarily cause progress to occur. In the case of the local brawl on Sydney’s Bondi Beach between business powerhouse billionaires David Gyngell and James Packer, no beneficial outcome came from their public debacle. Allegedly, their altercation was brought about because of Packer’s treatment towards his ex-wife, causing his close friend Gyngell to confront Packer about his behaviour, instigating a public fight on Bondi’s footpath. Sources have said that this was not the first time the pair had failed to resolve their differences, with these wrestles having occurred on seven or eight separate occasions. It is obvious that this physical fight did not enable progress, but it instead led to embarrassing publicity, with a photographer documenting the whole fiasco. Furthermore, each party was fined $500 for offensive behaviour.

This behaviour did not arise any need for development, nor did either party gain a positive outcome. Thus, as demonstrated, conflict is not always conducive to moving forward- and can just be a fight due to personal factors, nonessential to progress. Conflict and progress, while they both seem like contrasting ideologies, are more necessary to each other than generally supposed. In many situations, conflict can cause progress, such as Galileo choosing to steal someone’s invention to further his own scientific research. In larger, global circumstances, conflict has transpired the need for progress to be realised, highlighting areas of oppression or mistreatment that need to be corrected. It is in both of these events that conflict has been fundamental in evolving one’s self, and the whole society. However, conflict does not always lead to progress, with some fights simply leading to nothing but hindrance, such as James Packer and David Gyngell’s infamous brawl. Therefore, while conflict does not necessarily lead to progress, there can be no progress without conflict.

There can be no progress without conflict. (2016, Apr 13). Retrieved from http://studymoose.com/there-can-be-no-progress-without-conflict-essay 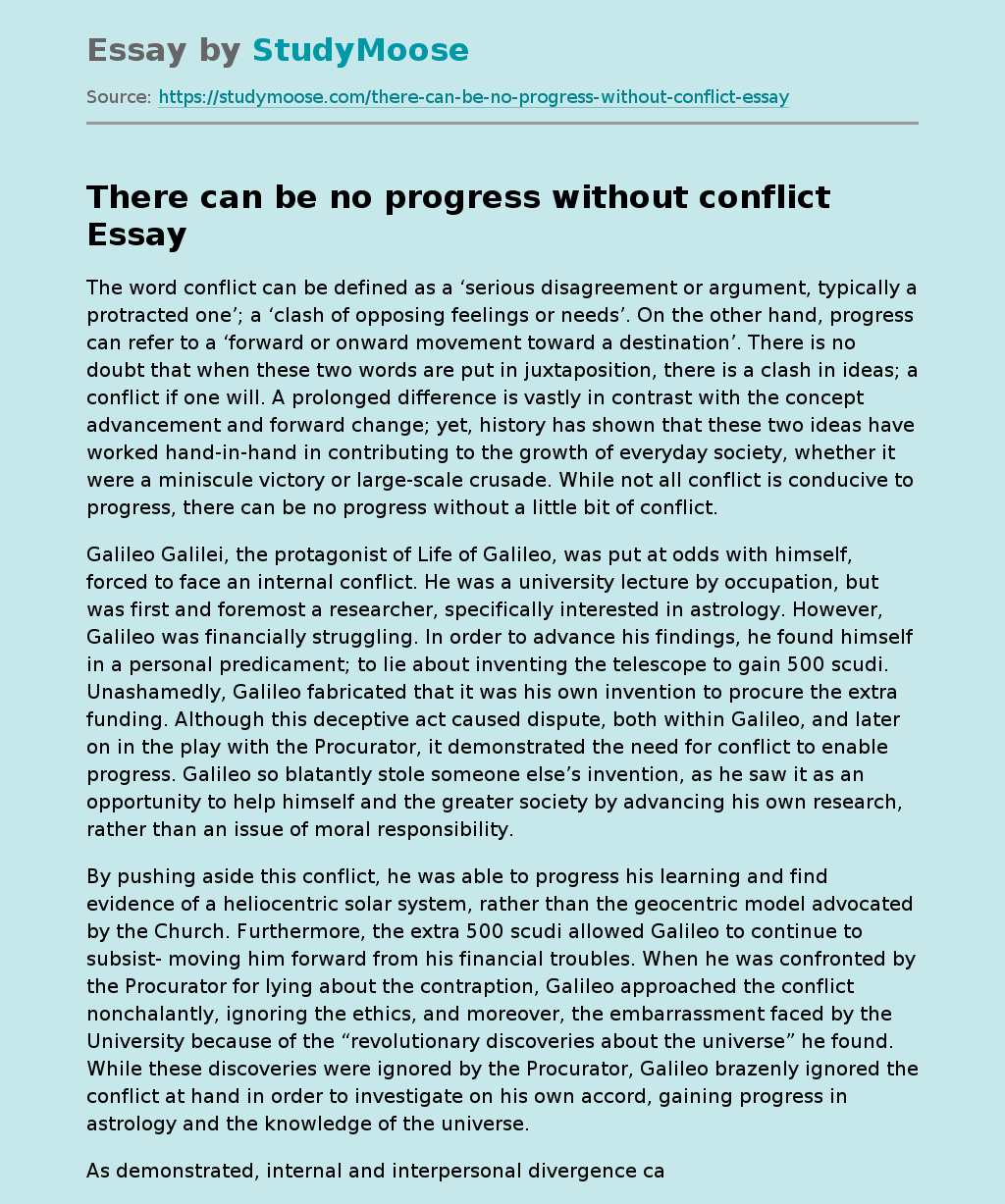