Born on May 18, 1889, American engineer and chemist Thomas Midgley, Jr. was controversial for two of his discoveries. One, he discovered the Freon while working for General Motors in 1930. He intended it to be a safe non-toxic refrigerant to be used in household appliances, to replace the dangerous refrigerants used before like ammonia and propane. Freon and other CFCs soon replaced the various toxic or explosive substances previously used as refrigerants, and were later used in other applications, such as propellants in aerosol spray cans and asthma inhalers.

Don't use plagiarized sources. Get your custom essay on
“ Thomas Midgley Jr. ”
Get custom paper
NEW! smart matching with writer

The Society of Chemical Industry awarded Midgley the Perkin Medal in 1937 for this work.

However, Midgley’s discovery resulted in damage to the earth’s Ozone layer. Two, Midgely discovered the effectiveness of tetraethyl lead as an antiknock additive for gasoline. On October 30, 1924, Midgley participated in a press conference to demonstrate the safety of TEL. In this demonstration, he poured TEL over his hands, then placed a bottle of the chemical under his nose and inhaled its vapor for sixty seconds, declaring that he could do this every day without succumbing to any problems whatsoever.

However, the State of New Jersey ordered the Bayway plant to be closed a few days later, and Jersey Standard was forbidden to manufacture TEL there again without state permission. Midgley himself was careful to avoid mentioning to the press that he required nearly a year to recover from the lead poisoning brought on by his demonstration at the press conference.

He sought treatment for lead poisoning in Europe a few months after his demonstration at the press conference. Midgley was relieved of his position as vice president of GMCC but continued to work for them. Midgley died three decades before the ozone depleting effects of CFCs in the atmosphere became widely known. Another adverse effect of Midgley’s work was the release of large quantities of lead into the atmosphere as a result of the large-scale combustion of leaded gasoline all over the world. High atmospheric lead levels have been associated with serious health problems. J. R. McNeill, an environmental historian, has remarked that Midgley “had more impact on the atmosphere than any other single organism in Earth’s history.” 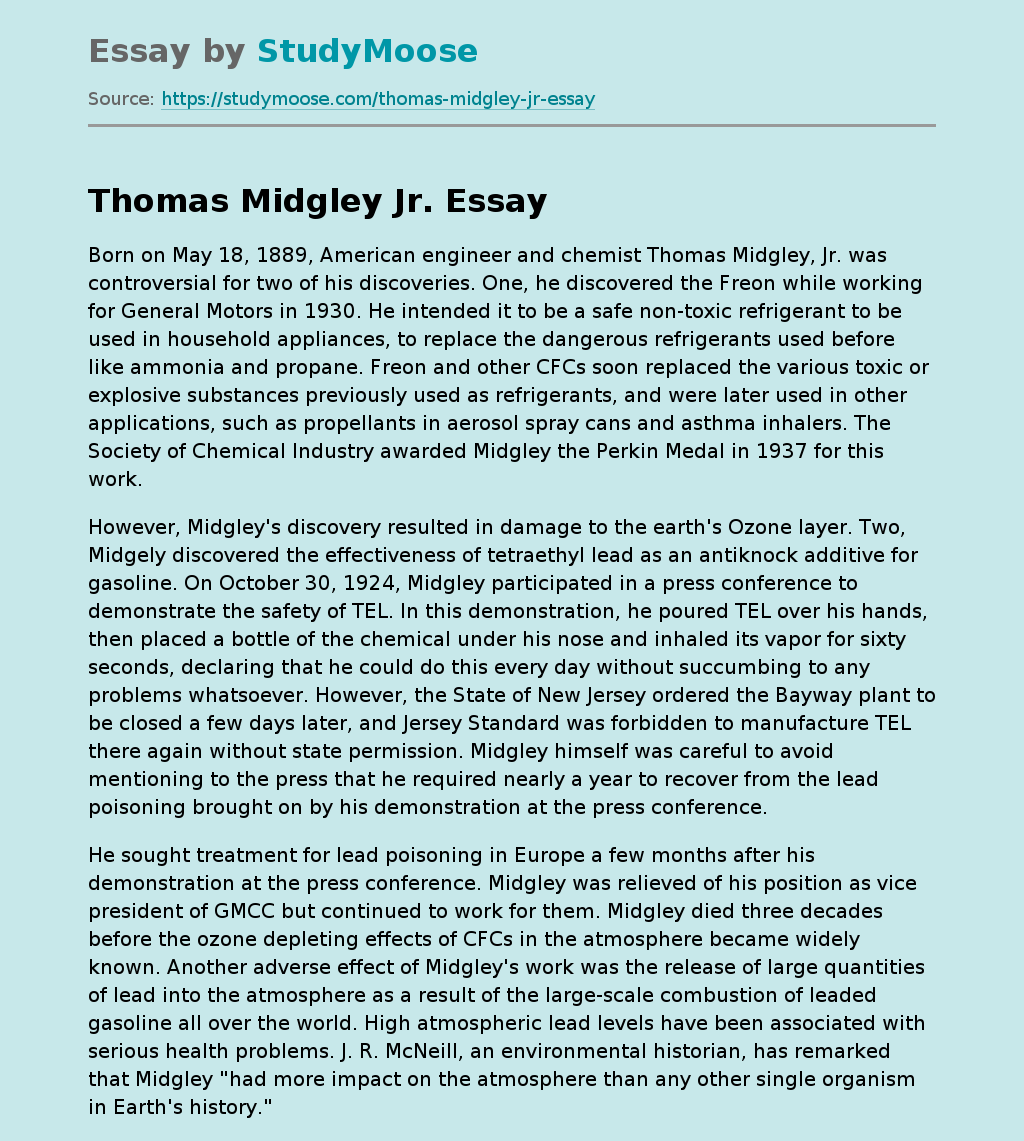