Marie Curie was born Maria Sklowdaska on November 7th, 1867. She was the fifth and youngest child in her family. Times were tough living in the Russian parition of Poland, and her family suffered many financial hardships. She attended school and graduated as Valedictorian, but all the years of stress lead up to a sort of breakdown, and she had to spend some time away from home with her uncle until she felt less depressed. Soon, she was ready for higher education.

Turn in your highest-quality paper
Get a qualified writer to help you with
“ Marie Curie Short Biography ”
Get high-quality paper
NEW! AI matching with writer

However, being a woman, Marie could not get higher education in Poland. This is when she began attending the Flying University, a secret university that accepted women and held classes in various places around town.

After she and her sister Bronisława finished studying there, they made an agreement to put each other through college in Paris. Bronisława went first, and Marie became a governess to cover the cost. She and the son of her employer ended up falling in love, but because she was poor, his parents would not let them marry.

She stayed in the house for one more awkward year until her sister graduated. Then it was her turn! She went to Paris and attended the Sorbonne, being one of only 28 women out of 1,825 students. She got master’s degrees in both physics and mathematics, subjects her grandfather pursued as well. In hopes to acquire a lab space that she could use for research, she was introduced to an instructor at the School of Physics and Chemistry named Pierre Curie.

At first Marie did not want to marry because of her intention to return home to Poland, but Pierre insisted that he would come along when she did so. However, unable to find a job in Poland that would accept Marie as a woman, she married Pierre and they worked together in Paris. They were hard at work, Pierre studying crystals and piezoelectricity, when they took interest in an experiment by Henri Becquerel. He had taken part in discovering the existence of radiation, and what Marie Curie would later call radioactivity.

He noticed that rays that resembled x-rays were emitted from uranium salts. Marie began to consider uranium rays as a possible thesis. She and Pierre worked with radioactivity, and Pierre worked with his crystals as well, when Marie eventually found a way to isolate the elements Polonium and Radium. She names Polonium for Poland, her home country. In 1903, Marie, Pierre, and Becquerel received a Nobel Prize for their research on radiation. This rendered Marie the first woman to receive a Nobel Prize. Then in 1911, Marie received a second Nobel Prize for her discovery of Radium and Polonium. This made her the first person to receive two Nobel Prizes.

Marie actually had her prizes melted down to serve more “useful” purposes. In other selfless efforts, she gave away her Nobel Prize money and was a big help when World War 1 broke out. Pierre ended up dying in a traffic collision. Marie died years later of Leukemia, due to long-term exposure to radiation. This would have killed Pierre as well if he had not died by other means. Marie was 66 when she died, with numerous health issues also caused by radiation. Now, years upon years later, her possessions are still unsafe to handle. Her papers and notes have to be kept in lead boxes because they are highly radioactive. In 1995, 60 years after Marie’s death, the remains of both Marie and Pierre were transferred to the Panthéon, Paris to honor their achievements. 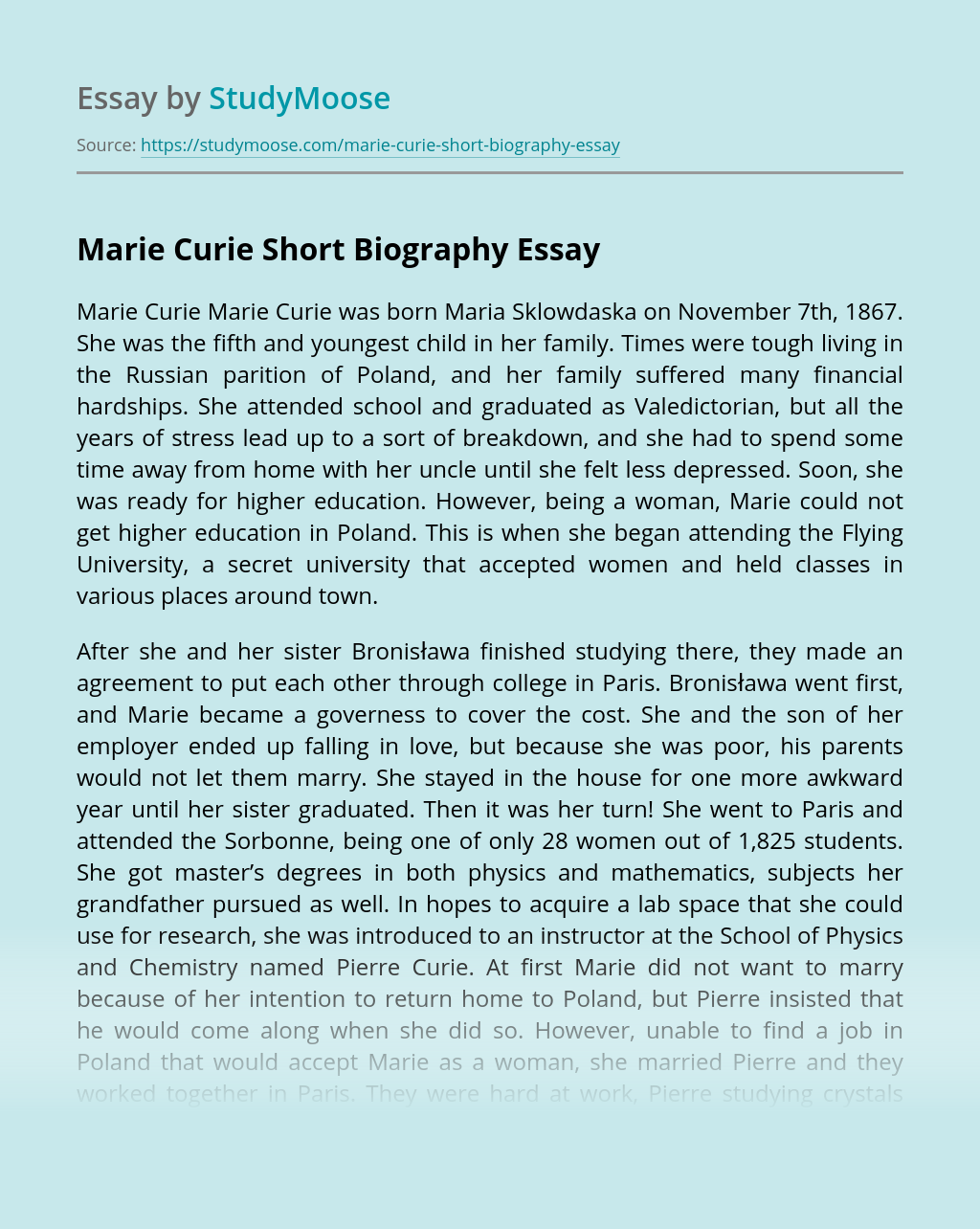 Turn in your highest-quality paper
Get a qualified writer to help you with
“ Marie Curie Short Biography ”
Get high-quality paper
Helping students since 2015
Stay Safe, Stay Original