This essay will firstly demonstrate a focus on mental health and social factors which create mental health. Moreover, critical analysis on the key aspects of a current health policy concerning mental health will be elaborated on, taking into consideration the effectiveness within the policy, what ladder of the intervention of approach it stems from as well as what the main ideology approach is behind the policy. Equally, factors that shape policy will be implemented and a range of ideological perspectives that influences how policy is constructed.

Don't use plagiarized sources. Get your custom essay on
“ This essay will firstly demonstrate a focus on mental health and social ”
Get custom paper
NEW! smart matching with writer

Furthermore, a critical analysis will be discussed throughout the essay on how the chosen policy has been implemented efficiently. Moreover, a critical analysis will be elaborated on using the Bardach (2000) policy analysis framework to clarify if the chosen policy is fully analyzed, understood and implemented effectively for the chosen health group. Additionally, an alternative approach will be considered analyzing the reality of the problem and how this can be improved, for example, using media advocacy, reaching the public through community level, general approaches, or a focused approach.

Lastly, referring to the findings from the policy analysis a strategy will be critically discussed on other tactics that can be employed in order to influence the policymakers. Moreover, the essay will look at other existing policies and other proposals that could be included in the policy on what actions that can be implemented, for instance, charity, the conference to gain the public’s attention.Mental health has been associated with a mass amount of suicides making this a major public health issue in 2017 there were 5,821 suicides due to mental health within the UK (Office for national statistics, 2018)Additionally, the chosen policy is the 2010 to 2015 government policy: mental health service reform policy which addresses several core aspects regarding tackling mental health, Department of Health & Social Care (2015) notes there is evidence that structural barriers such as access to health care, social services and employment opportunities for individuals in the UK with mental health problems are falling short.

This essay will firstly demonstrate a focus on mental health and social. (2019, Aug 20). Retrieved from http://studymoose.com/this-essay-will-firstly-demonstrate-a-focus-on-mental-health-and-social-essay 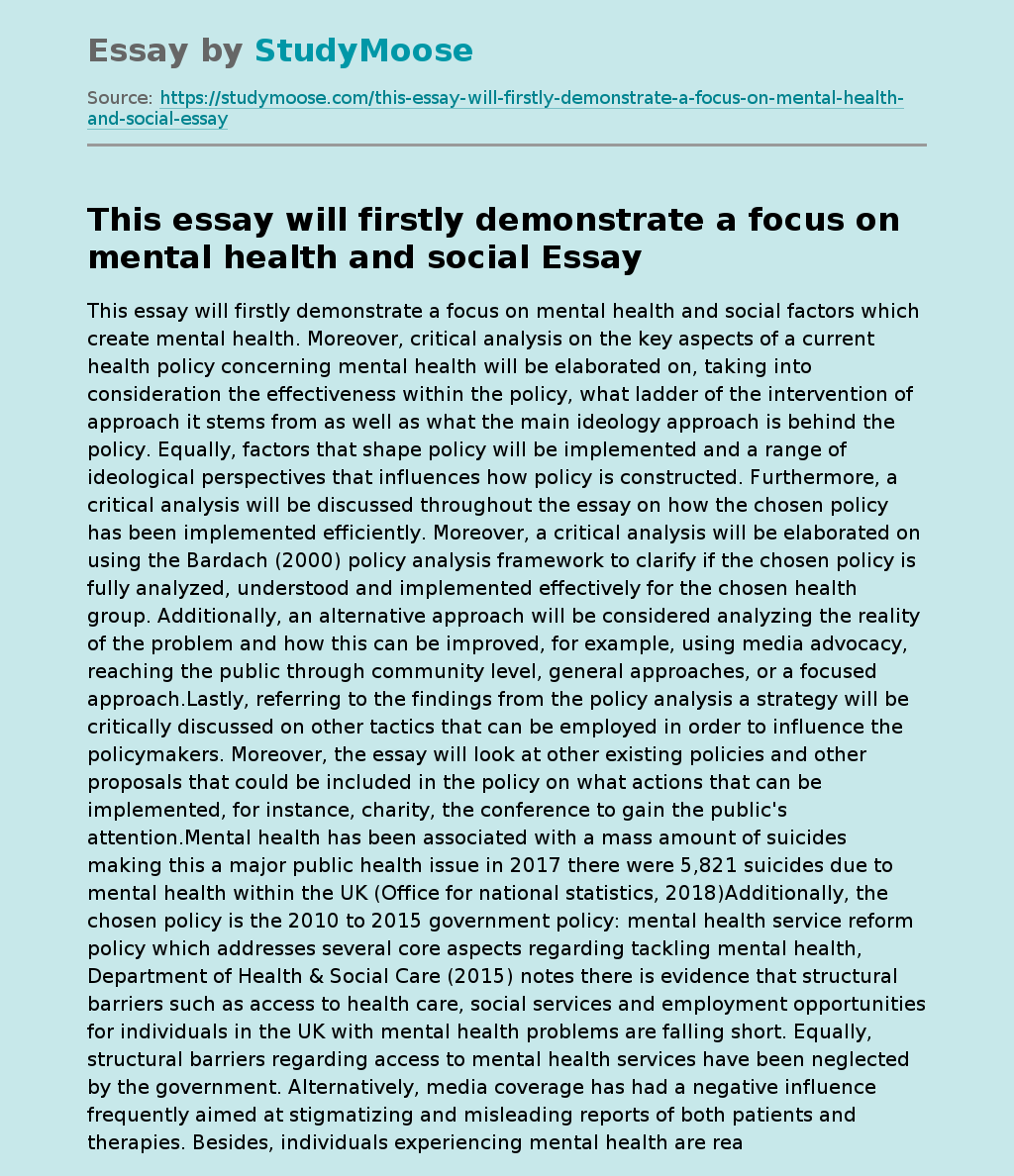