“All animals are equal, but some animals are more equal than others,” is a quote from George Orwell’s novel, Animal Farm, that conveys a sense of the central themes of class, power and corruption, and language and propaganda that play out in the novel (112). Through the experiences and society created by a group of farm animals, Orwell is really suggesting that human society is flawed in many of the same manners that play out as themes in his book. Concerns over the separation of class, power and corruption wielded by those in positions of authority, and usage of language to manipulate and persuade others drive the storyline as Orwell supports how these themes translate to the human experience.

Don't use plagiarized sources. Get your custom essay on
“ Themes in “Animal Farm” by George Orwell ”
Get custom paper
NEW! smart matching with writer

“Somehow it seemed as though the farm had grown richer without making the animals themselves any richer-except, of course, for the pigs and the dogs,” demonstrates how the animals are separated by class where some reap more benefits than others (Orwell 129). As the animals struggle to produce for the humans, not all the animals are treated the same or get the same rewards, so there is a class system among the animals.

While some animals are aware of the inequality, others are not, which is how it plays out in human society. Orwell is trying to tell mankind to treat people fairly or society will suffer. If all the animals were equally productive and reaped the same benefits, then there wouldn’t be a plot to the novel. The separation of class is an important element in the upheaval that occurs in the book that highlights power and corruption.

“Napoleon is always right,” is a quote that demonstrates Orwell’s use of power and corruption in the novel (Orwell 56). No one can be completely right all the time, yet the animals look to Napoleon to solve all of their problems and they don’t think much past that. Orwell is highlighting how mankind blindly follows those in power because of the power they wield, but without thought to their motives. He is suggesting that society could benefit from thinking more about who people are instead of the power that they hold. There are good and bad people everywhere and just because they make it to a position of authority doesn’t mean they are right for the position. He is telling us to think for ourselves. Yet, as with the animals, not all the people are capable of thinking and understanding at the same level, so does this even work? Perhaps there is a need for authority, whether corrupt or not, to guide those who cannot think for themselves. Either way, Orwell is providing us a glimpse into the problems associated with blindly following power and authority when corruption is involved.

Orwell uses the seven commandments to highlight how language is used to manipulate and control the animals (Orwell 24-25). He continues this use of persuasive language throughout the novel to show how words can be used as propaganda to persuade others. This is much the same as human society. Propaganda is used to make people buy products through commercials, or endorse political ideas. Again, Orwell is suggesting the importance of thinking things through and not blindly following others. Words can be used to compliment, to hurt, or to persuade, so words should be considered very carefully.

George Orwell’s Animal Farm highlights themes that are shared by human society. Class, power and corruption, and language and propaganda are all concerns that can cause disruption and unhappiness. He points out that society is sort of built on a separation of class and an assignment of power to guide those who cannot guide themselves. He makes an interesting point for consideration that perhaps there is no society without these themes playing out, so that they are essentially a necessary evil. He is also concerned with fair treatment of all and leaves us to ponder if society can ever become fair. 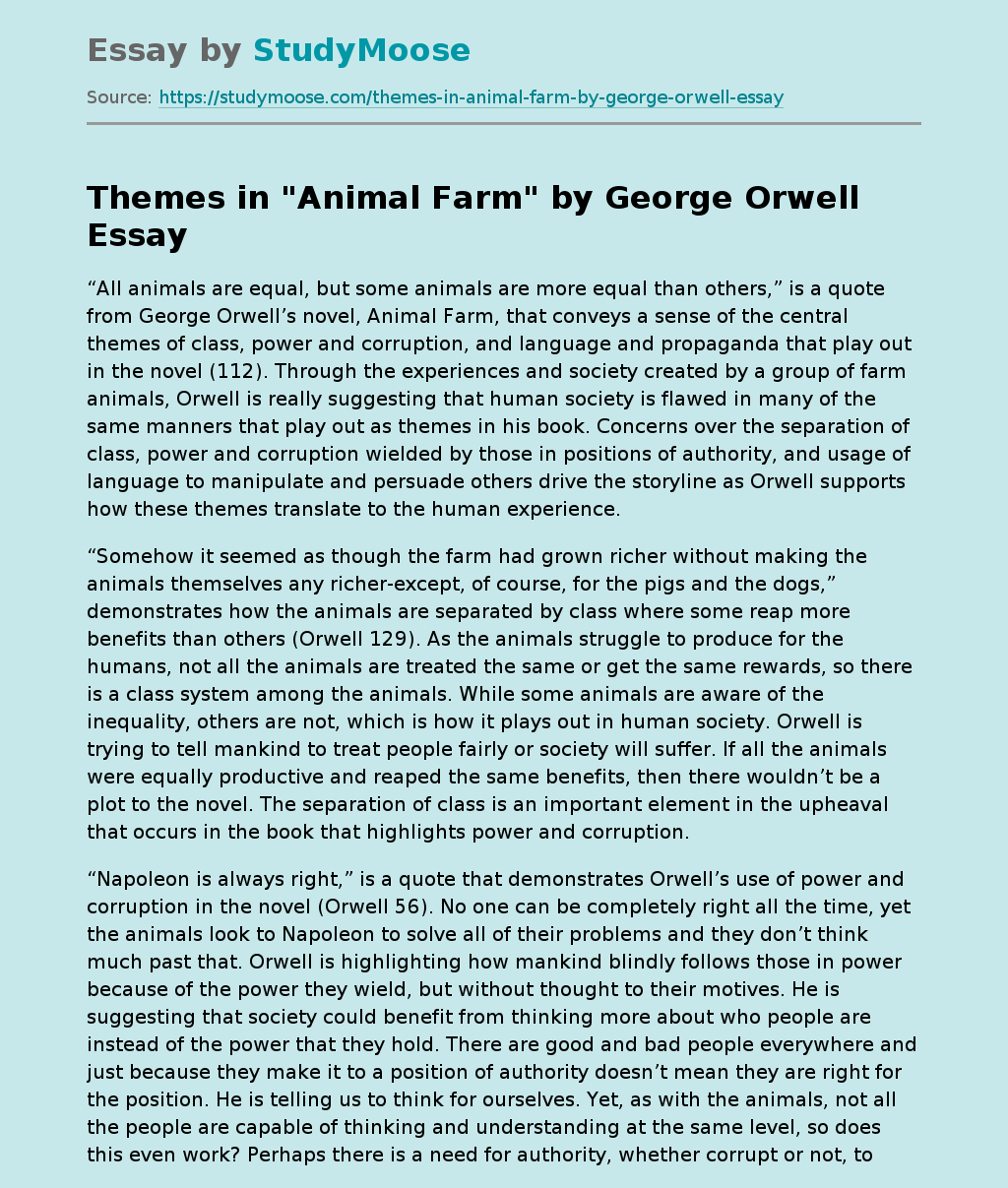