Themes and Symbols in The Lord of The Rings

There are many themes to explore in the classic trilogy: The Lord of the Rings written by J.R.R. Tolkien, and later turned film directed by Peter Jackson. The Lord of the Rings is laced with strong symbolism and allusions to historical happenings. Many find excitement in dissecting the unbeknownst secret paths of this trilogy because it requires the onlooker to take an extra step of connecting the common threads. Although the further effort may be an enticing venture, there is pleasure to be found in reviewing an obvious theme of this trilogy.

Don't use plagiarized sources. Get your custom essay on
“ Themes and Symbols in The Lord of The Rings ”
Get custom paper
NEW! smart matching with writer

Much like present society, the Shire encompasses levels of social class. Frodo Baggins, who is of a high class, inherited many of Bilbo’s possessions.

Perhaps the most rewarding result of Frodo’s acquisition is his lasting friendship with Samwise Gamgee, his gardener. Throughout the tale ofThe Lord of the Rings, it is clear that, “Sam and Frodo never step fully out of their class roles. It would be unthinkable for Sam to consider himself Frodo’s equal” (Robertson, “The Path of Love” 227). The most interesting aspect to Frodo and Sam’s relationship is the possibility of a master-servant affiliation upholding mutual respect while maintaining professional boundaries.

Once the perilous task ahead is made clear, Sam commits to stay by his master’s side. One of Sam’s first trials includes confronting a body of water: “When the Hobbits cross the Brandywine, he has his first doubts about leaving the Shire” (Robertson, “The Path of Love” 229).

Although Frodo and Sam agree to Gandalf’s asserted trip, the extent of the journey is unexpected by both parties. The strain of bearing the ring of power weighs heavily on Frodo because he is elected the sole ring-bearer. Sam’s loyalty is prevalent at the end stage of their adventure: “If Sam can’t carry the Ring for Frodo, he can carry Frodo!” (Robertson, “The Path of Love” 241). Frodo and Sam’s relationship is one of the most frequently discussed among fans, which shows how deeply the characters affect their admirers. Sam’s loyalty to his superior is perfectly summed by Robin Robertson: “Sam’s is the simplest yet the most touching of all paths: His simple loyalty and love for Frodo make him the single person who never wavers in his task throughout the book” (Robertson, “The Path of Love” 225).

Legolas and Gimli’s undying loyalty to one another causes my soul to grieve with them for Middle Earth. The pair are perhaps the truest of friends in this trilogy, despite their undeniable differences. Legolas is a free Elf who is swift, light footed, and has heightened senses. Gimli is quite the opposite as he is a clambering, boisterous Dwarf. Legolas wields a bow, which is a marvelous match to his superior vision. It could be speculated that Gimli’s choice of a weighty axe would hinder Legolas’ stealth. The Dwarf and Elf are historically opposed to one another because, “Dwarves are solid and stable, bound to the Earth, the natural element of Elves is the air. They move so lightly that they leave not a mark running over snow” (Robertson, “The Path of Opposites” 278). Through warfare and unpredictable striving, Legolas and Gimli establish an entwined union, and they always account for each other: “Gimli the Dwarf and Legolas the Elf grow from uneasy allies to inseparable friends, offering all of us an example of the reconciliation of opposites that has to take place in each of our souls” (Robertson, “The Path of Opposites” 276).

One of the greatest aspects of a loyal relationship is the bond of humor. The combo sustain a game in which record is kept of how many orcs each has individually slayed: “Gimli announces proudly that he’s up to 21, but now finds that Legolas has been involved in hand-to-hand fighting with his knife and his total is now up to two dozen” (Robertson, “The Path of Opposites” 286). Friendly competition is merely a small example of how deeply Legolas and Gimli are bonded, because loyalty is the true symbol of their intimacy. Gimli is constantly fearful of the veiled mysteries that are lurking in the dark. Despite his durable façade, he always follows Legolas into the unforeseen battles of Middle Earth. Gimli’s loyalty to Legolas endures: “Of course, those who have no fear, like Legolas, can also never learn to master fear. It is in passing through the Paths of the Dead that we truly see just how brave Gimli is” (Robertson, “The Path of Opposites” 289). Gimli conquers his doubts continually to remain loyal to his steadfast friend Legolas, whom fear does not grip, and in return Legolas looks after him.

Merry and Pippin could easily be mistaken for blood relatives due to the playful nature of their friendship. These adventurous Hobbits are known for their bothersome pranks, and they are readily available for any trek. As Merry and Pippin voluntarily accompany Frodo and Sam on their task, they are not aware of the dangers that lie ahead. Along the journey, the fellowship is faced with various obstacles, but discouragement does not touch these Hobbits. The pair are inseparable, and they draw on each other’s strength: “Though still far from friends or safety, lost in the middle of a land totally unknown to them, they tease each other as if out for a picnic” (Robertson, “The Path of Curiosity” 103). They are arguably the most loyal of friends in The Lord of the Rings trilogy due to their outstanding devotion: “Merry and Pippin together present a more formidable front than either does alone” (Robertson, “The Path of Curiosity” 103).

Although they are incredibly strong together, the twosome are not always conjoined. When foolishness separates Merry and Pippin, they are faced with the challenges of Middle Earth without their counterpart. They confront separateness for the first time in their relationship, but reap the fruits of adversity: “Both Merry and Pippin have had to learn wisdom the hard way, through facing darkness, which is perhaps the only way it can be learned” (Robertson, “The Path of Curiosity” 110). Although Merry and Pippin are infamous rascals, their loyalty to one another cannot be doubted by their friends, and their lighthearted joking carries them throughout their greatest threats.

J.R.R. Tolkien wrote a tale which is complete with many avenues to explore. The variety of themes and symbols that he provided his reader, and Peter Jackson displayed for the onlooker, is a draw to The Lord of the Rings. It is feasible, though, that Tolkien’s history of rich friendship with Lewis is the backbone to his trilogy: “Tolkien and Lewis fought in the trenches, and the experience echoes through their fiction, but it was their postwar friendship, well described here, that also inspired their most famous works” (Engel). Wartime is filled with misery and grief, but loyal friendship will heft any man, Hobbit, Elf, or Dwarf throughout the battlefield. Witnessing Frodo Baggins and Samwise Gamgee, Legolas and Gimli, and Merry and Pippin proves to be an outstanding display of loyalty as they venture from the comforts of home to the depths of Mordor, and on to win redemption for Middle Earth.

Themes and Symbols in The Lord of The Rings. (2021, Dec 07). Retrieved from https://studymoose.com/themes-and-symbols-in-the-lord-of-the-rings-essay 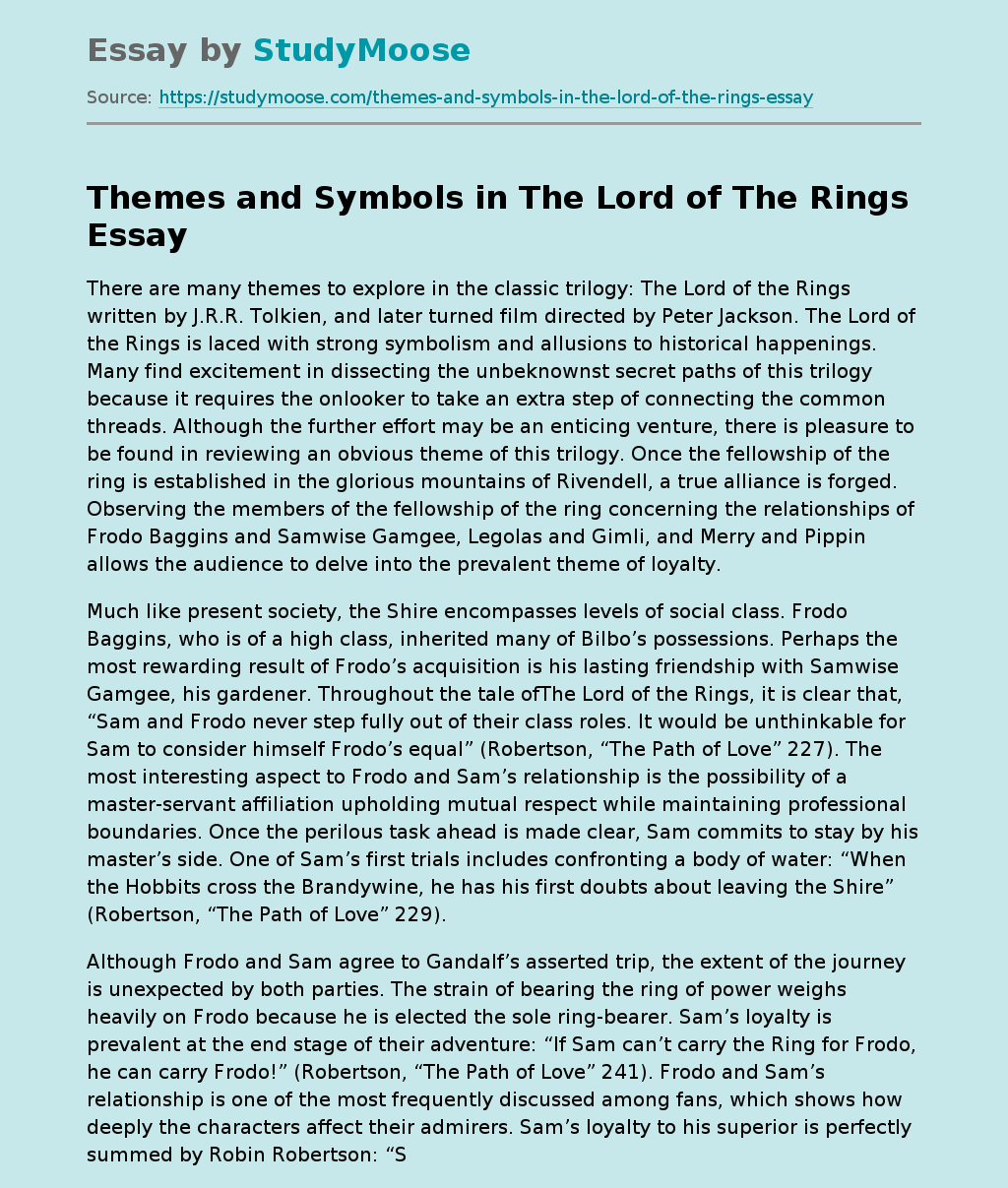