The Year Of 1776 In American History History

The year of 1776 was an important year in American history. The Revolutionary War had just begun and the outcome was still uncertain. It was year that would decide America’s future and test the will of our American soldiers. Several key battles were to be fought in an 18 month time frame and some of the most key battles were fought during the year of 1776. The author David McCullough takes the reader back in time to the 18th century right after the Battle of Lexington and Concord and the Battle of Bunker Hill.

Don't use plagiarized sources. Get your custom essay on
“ The Year Of 1776 In American History History ”
Get custom paper
NEW! smart matching with writer

These battles marked the beginning of the Revolutionary War. He starts the book off with the Siege of Boston and continues through to the Battles of New York, Princeton and Trenton. David McCullough’s vivid knack for story telling captures the ups and downs that the Continental Army would face during the year of 1776.

The Revolutionary War, (1775-1783), also called the War of Independence was between Great Britain and the thirteen British colonies.

The King of Great Britain was George III, he was very popular during his reign, but he lost the loyalty of the American colonist who felt that being taxed without representation in Parliament violated their rights. Congress appointed George Washington as Major General and Commander-in-chief to lead, the soon to be independent states, against the super power Great Britain. The lives of both these men are fairly portrayed in this book. King George and Parliament have had enough of the traitors turned “rabble in arms.” (McCullough 20) George Washington, is portrayed as a human man, who has doubts and is always wondering what the future holds for them around the corner.

“The Siege of Boston was the opening phase of the American Revolutionary War in which the New England militiamen, who later became a part of the Continental Army, surrounded the town of Boston, Massachusetts to prevent movement by the British Army garrisoned within.” The first battle for Boston began at Lexington and Concord, where the New England militia surrounded Boston. The British successfully seized Bunker Hill but they suffered many casualties despite fighting an army half their size.

The end of the siege came when George Washington decided to seize the high ground at Dorchester Heights, overlooking Boston. Since it was the middle of winter, they were unable to dig in and they had to use logs branches and anything else available to fortify their position. The British cannons were out of range and their barrage of cannon fire could not reach the Americans at such a height. They planned an assault on the heights but due to a terrible storm they decided to withdraw peacefully as long as they were allowed to leave undisturbed. While the British were leaving, they thought they saw some movement and opened up a massive hail of cannon fire that lasted all night. It only killed four men but they were again out maneuvered by General Washington and his “rabble in arms.”(McCullough 20)

McCullough does an excellent job portraying the differences in the Continental Army compared to the British. The Continental Army was made up of mostly volunteers. Often they were short of gun powder and clothing. They were unskilled in combat but they did have a few advantages. A major advantage was they fought on their own soil and knew the terrain well. They may have lost some battles, but they took the lives of many British soldiers who could not easily obtain reinforcements. For the British, it was discouraging to win battle after battle to realize how many men and supplies it cost them in the process. Surely to conceive that you were far superior in the art of war but couldn’t bring the Continental army to their knees had to have severe psychological effects.

The British troops eventually turned their focus to capturing New York City. The King hired Hessian troops to assist with defending New York. The British would drive back the American troops to the Brooklyn Heights. Washington had to withdraw his entire remaining army and all of their supplies across the East River in one night without the British noticing. This led to Washington’s decision to attack the Hessians on Christmas night by way of crossing the frozen Delaware River. They captured almost 900 Hessians at the Battle of Trenton. McCullough states “With the victory at Trenton came the realization that the Americans had bested the enemy, bested the fearsome Hessians, the Kings detested hirelings, outsmarted them and outfought them, and so might well again”. (McCullough 290) Cornwallis marched to retake Trenton but was outmaneuvered by Washington, who successfully defeated the British at Princeton.

In my opinion this book is a must read for anyone interested in early American history. McCullough has a keen way of bringing readers back to the fateful year of 1776. He has a great eye for detail and has a knack for bringing the story to life. He was fare to the English and George III and was able to show why the English felt the American colonist rebellion was illegal but, an insult to them as well. I also like how he showed the human side of George Washington as indecisive and apt to makes some key errors at times. He also shows it was the determination of the Continental Army that made all of the difference in winning the war. Without these men our country would most likely still be under British rule. Every American should read this book it would help a vast amount of people to gain some appreciation of the founding of our country and the sacrifice of all of those who made this the great nation what it is today.

The Year Of 1776 In American History History. (2019, Aug 19). Retrieved from https://studymoose.com/the-year-of-1776-in-american-history-history-essay 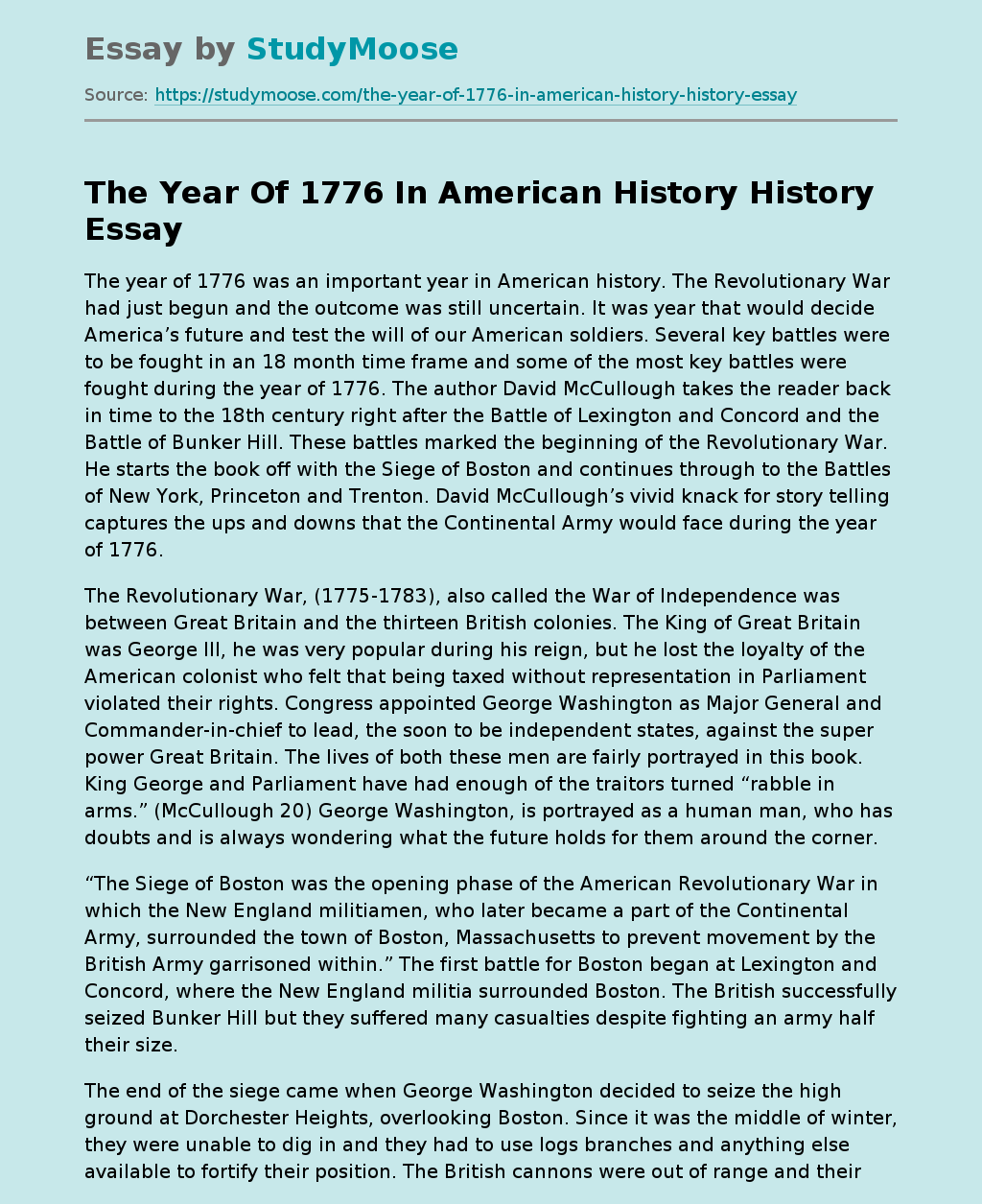