The Long Drive: Will You Re-Up Next Year?

A cow town is simply a town in which cattle were taken to put on railroads. The only problem is, these towns are located in Kansas, about 1000 miles from Texas, a trip that usually takes up to 3 months. Because of this and water worries, low pay, and lack of sleep, I, along with 2/3 of those on this year’s drive, will not re-up for next year’s long drive.

With the constant worry of a flooded river, unable to be crossed, or a stampede of thirsty cows as they sense water, I fear that I won’t re-up for this long journey.

Don't use plagiarized sources. Get your custom essay on
“ The Long Drive: Will You Re-Up Next Year? ”
Get custom paper
NEW! smart matching with writer

I will not re-up due to all of the chaos and danger from a stamped of cattle, in which my life could be taken as a stampeding cow tramples me (Document D). I’m also terrified of encountering an experience alike that of James Cook, where he encountered a flooded river in which he had to swim across (Document E).

Proficient in: My Adventurous Trip

But I fear that these two are not the only reasons of me not joining again next year.

I also wouldn’t like to re-up because of the lack of sleep. I remember how tired is was with 2 hours of sleep lost every single night due to having to keep watch of cattle (Document B) and how Cook had to smear tobacco juice into his eyes to stay awake (Document E). With having to keep watch on the cattle in case of raids or stampedes, I lost 2 hours of sleep each night, making it hard to stay awake will on horseback (Document B and E).

But even with the troubles with water and sleep, I still might’ve joined the long drive again if not for the low pay despite all of these troubles.

Ultimately, I’ve decided not re-up for next year’s long drive because my constant worry about water, the lack of sleep I receive, and the low pay despite of it all. I find the job long, tiring, and dirty without much
positive outcome. I will not re-up for the long drive next year.

The Long Drive: Will You Re-Up Next Year?. (2016, Mar 18). Retrieved from https://studymoose.com/the-long-drive-will-you-re-up-next-year-dbq-essay 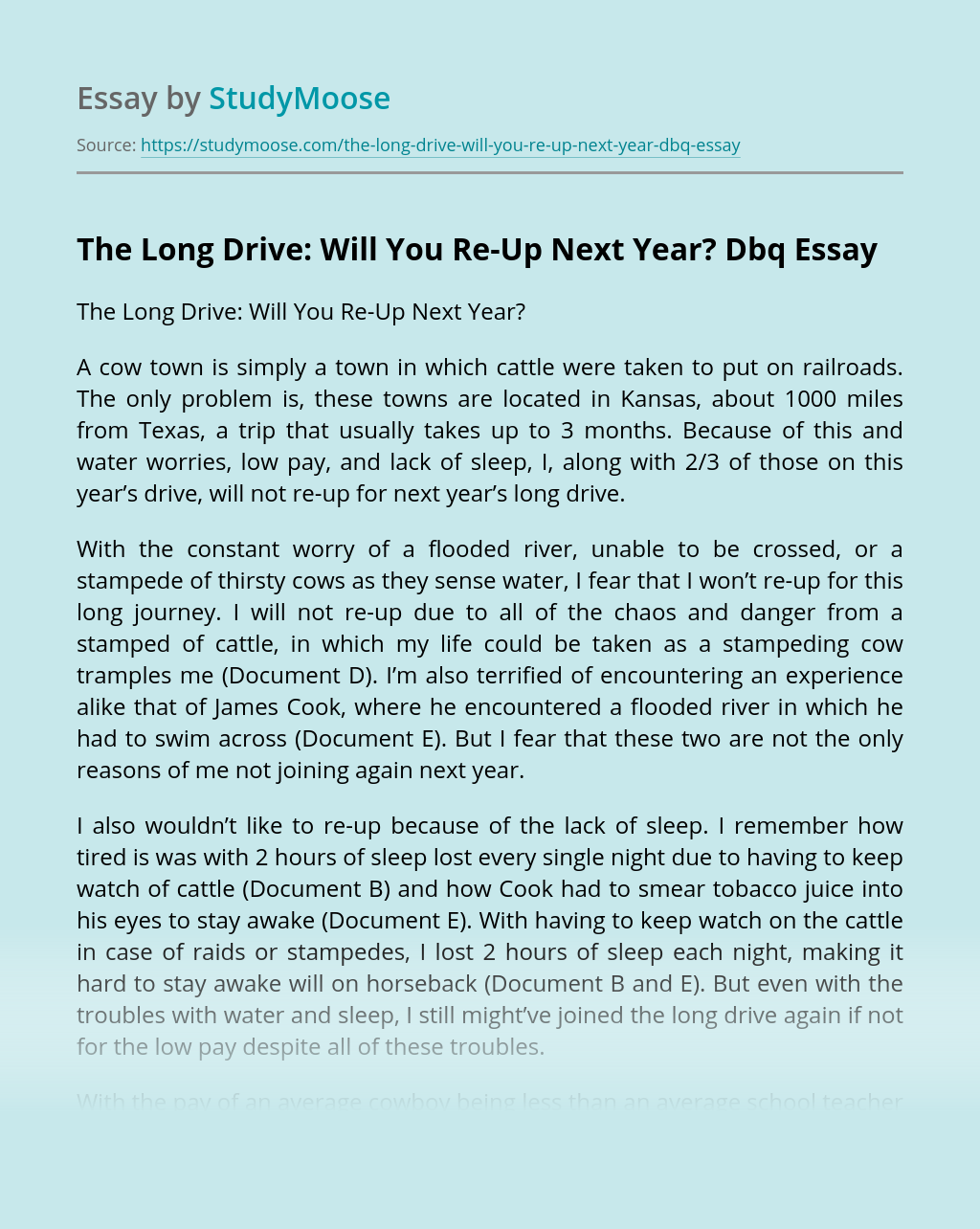