The Way of Women’s Resistances in “The Yellow Wallpaper”

Turn in your highest-quality paper
Get a qualified writer to help you with
“ The Way of Women’s Resistances in “The Yellow Wallpaper” ”
Get high-quality paper
NEW! AI matching with writer

In my opinion, the reason resulting in her lower social situation is the narrator’s retreat from the reality, and the narrator must break the tradition of patriarchy if she wants more rights and free. In this story, the narrator’s economic dependence on her husband made her live in a low position in the family and struggle with the oppression from her husband. These oppressions and constraints leaded her to mentally ill.

To avoid becoming the servant of the man, the narrator decided to challenge the patriarchy, and finally she broke the tradition and released her true self.

The image of the narrator created by Gilman leads most women to express their discontents to the man-dominant society. Deborah Thomas describes in “The Changing Role of Womanhood”, “prior to the twentieth century, men assigned and defined women’s roles”, and they “perpetrated an ideological prison that subjected and silenced women”(1). “I”, as the nameless narrator of the story, provides a vivid example of oppressed women who struggled in low position of the society.

At the beginning of the story, “I” was taken to “a haunt house” which is “standing well back from the road, quite three miles from the village”(Gilman 87). The room of “I”, “a big, airy room” with “barred windows”, was described like a prison (Gilman 89).

These images are enough to illustrate that “I” was confined. In addition, the attitude of the character’s husband also showed the low social position of women. Interestingly, both character’s husband and brother were “high standing” physicians and “I” just was a patient with ”temporary nervous depression”(Gilman 87). That means women must comply with the men’s request in family such as stopping writing and thinking. In the story, “I” thought “personally, I believe that congenial work, with excitement and change, would do me good. But what is one to do”(Gilman 88). This description proves that John doesn’t pay attention to his wife’s demands. In fact, John often treated her as a child. John referred the narrator to “”little girl” and repeatedly cooed such phrases as “ blessed little goose”(Gilman 90).

All mentioned above show the women received no equality at that time. “I” was confined in the nursery and without companionship. This situation made the hysteria of “I” get worse and “I” began to have illusions. “I” felt there was “a woman stooping down and creeping about” behind the yellow wallpaper (Gilman 94). The image of the woman behind the wallpaper shows the readers another oppressed woman. Actually, the narrator projected her oppressive experience into the woman behind the wallpaper, and the yellow wallpaper was used to symbolize the patriarchy. As Hochman says in “The Reading Habit and ‘The Yellow Wallpaper’”, “the narrator herself becomes a reader-an avid, indeed and obsessive reader-of the paper on the walls that surround her”(90).

So in “The Yellow Wallpaper”, the narrator’s attitude to the yellow wallpaper, actually, is her attitude to the patriarchy. When “I” came into the nursery, “I” noticed the wallpaper immediately. In narrator’s opinion, the wallpaper is “committing every artistic sin” and “the color is repellant, almost revolting; a smouldering unclean yellow, strangely faded by the slow-turning sunlight”(Gilman 89). That means the narrator was disgusted with the patriarchy. Moreover, the narrator also thought the wallpaper “was not arranged on any laws of radiation, or alternation, or repetition or symmetry, or anything else that [she] ever heard of”(Gilman 93). It suggests that the narrator don’t think the patriarchy is an absolute rule that women must follow.

Even though the narrator was discontented with her oppressed circumstance, she still submitted to the man-dominant society. The narrator always consoled herself, “John loves me so” and “he takes all care from me, and so I feel basely ungrateful not to value it more”(Gilman 89). The reasons why “I” would like to follow the patriarchy may be women’s economic dependence. In “The Yellow Wallpaper”, the narrator’s husband earned money as a physician and she has no income. If a woman has to depend on her husband, she won’t have equality to men. The narrator’s husband cares her less and less because of her dependence on him. Sometimes, he “is away all day, and even some nights”(Gilman 89). And the narrator’s retreat didn’t make her get the rights of writing and considering. It just made her hysteria get worse.

As a flagrant contrast to the narrator, Jennie was a woman who completely became an apologist for patriarchy. “She is a perfect and enthusiastic housekeeper, and hopes for no better profession. I verily believe she thinks it is the writing which made me sick”(92). As a woman, Jennie would not sympathize the situation of “I” rather oppress “I” with John together. That illustrates a part of women have been prisoned by patriarchy and they also have lost self-awareness. In addition, the image of Jennie shows the serious consequence of following patriarchy blindly. If the narrator is an example of feminist because of her challenging the traditional patriarchy, Jennie is another example of women who has poor social situation because of her retreat from the reality.

Under the strict surveillance and control, “I” endure everything without any resistance. The windows were barred, “I” could look out through the windows. “I” was locked in the nursery, but she also can write and consider secretly. The constraints from the narrator’s husband just could prison her body rather than her thoughts. ”But I don’t mind it a bit—only the paper”(Gilman 92). “I” watched the wallpaper everyday, and finally, “I” found behind the wallpaper, “sometimes, there are a great many women, and sometimes only one”, “the woman behind shakes it”, “they get through, and then the pattern strangles them off and turns them upside down, and makes their eyes white”(Gilman 99). The woman imprisoned by the yellow wallpaper is a symbol to the narrator imprisoned by the patriarchy.

The narrator decided to help the woman behind the wallpaper. “When that poor thing began to crawl and shake the pattern, I got up and ran to help her”(Gilman 100). Thereupon, “I shook and she pulled, and before morning we had peeled off yards of that paper”(Gilman 100). These look like the narrator’s mad activities, but they represent the narrator wants to break the traditional patriarchy rules. After the yellow wallpaper was peeled down, the narrator became the image of woman behind the paper. She became mad but she was free. The story implies a certain consequence of fighting against patriarchy that is the oppressed women will get free and release their true-selves.

At the end of the story, that “I” “creep smoothly on the floor” made John have faint. It explains how significant the narrator’s resistance is. That women never keep silence about the man-dominant society is a considerable shock to the men and the whole society. On the surface, the narrator was beaten down by reality and get mad, however, it also can be interpreted that her crazy activities help her break the patriarchy and get free.

In conclusion, Gilman depicts a brilliant story in “The Yellow Wallpaper”, exposing women’s subordination and oppression in the patriarchy society. It also shows women a way that never keep silence to the oppression from men to get the rights which they should have, just like “I” did in “The Yellow Wallpaper”. As Simone writes in “Charlotte Perkins Gilman and the Feminization of Education”, Gilman “hoped to end gender discrepancies within society by creating a fundamentally new women”(14).

“The Yellow Wallpaper” doesn’t only serve as a witness of what happened in the past, but has also served the purpose of a reminder of what women must be doing in the future. Gilman’s writings about these tensions and struggles between marriage and career, social expectations, and personal goals continue to impact women’s decision today. So this story ”The Yellow Wallpaper” still has significant meaning for the modern age.

The Way of Women’s Resistances in “The Yellow Wallpaper”. (2016, Nov 04). Retrieved from https://studymoose.com/the-way-of-womens-resistances-in-the-yellow-wallpaper-essay 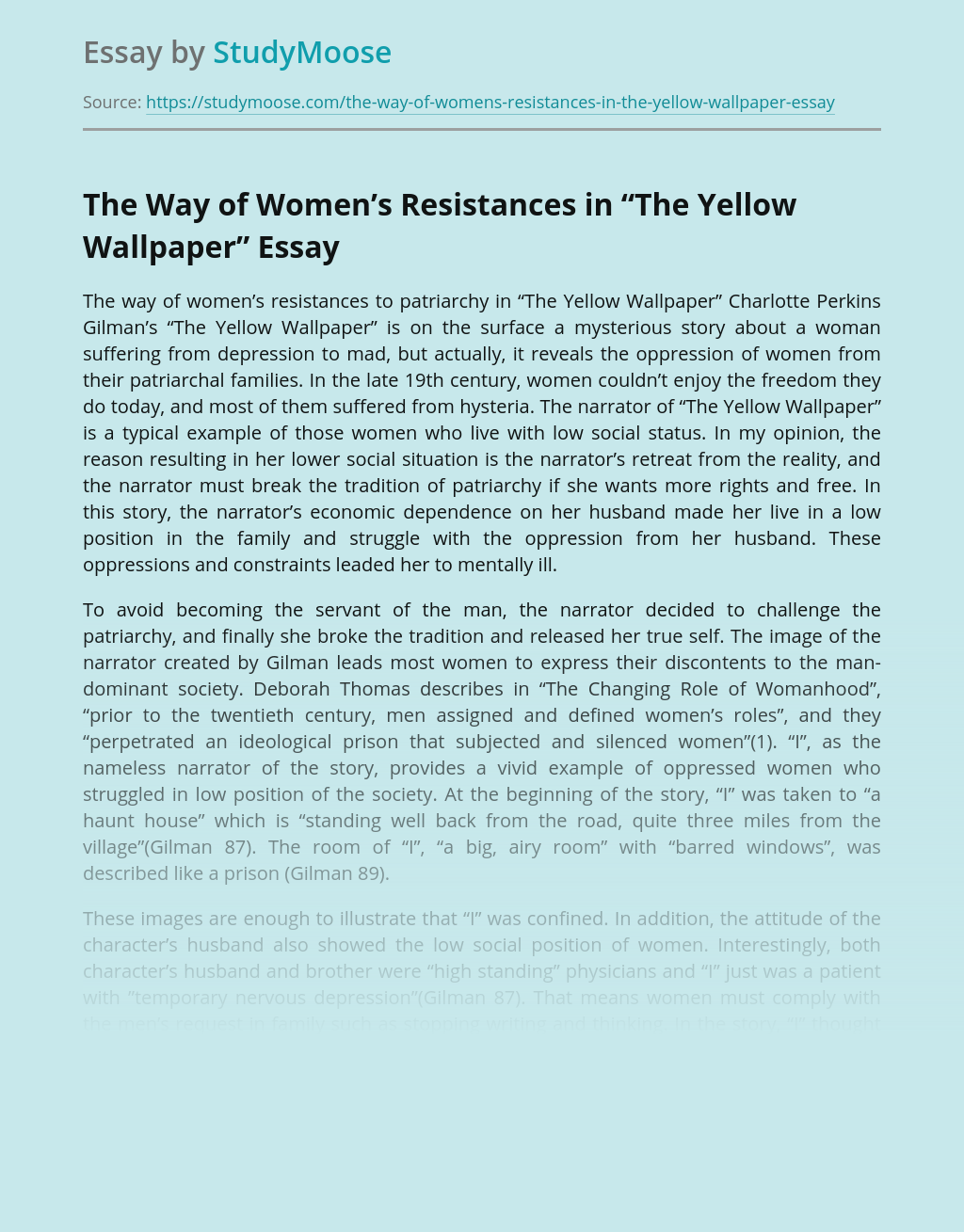 Turn in your highest-quality paper
Get a qualified writer to help you with
“ The Way of Women’s Resistances in “The Yellow Wallpaper” ”
Get high-quality paper
Helping students since 2015
Stay Safe, Stay Original