"The Use of Force" by William Carlos Williams

The short story titled The Use of Force by William Carlos Williams, a doctor tries to treat a young girl who refuses the treatment he offers. Despite the fact that her parents and the doctor make and attempt to reason with the girl, she continues to defy them in their efforts to help her. The reason this short story has become a classic, is because it illustrates what makes a hero. The fact that the doctor is determined to help the young girl who makes every attempt to refuse help, may seem like simple task, but when the outcome could be certain death, the main character becomes to show heroic qualities.

Don't use plagiarized sources. Get your custom essay on
“ “The Use of Force” by William Carlos Williams ”
Get custom paper
NEW! smart matching with writer

In a situation as this, it was important for the doctor to be persistent for the girls own good. Other wise she may have faced and untimely death. Because of these heroic qualities the doctor possesses, the girl sir comes to the doctor’s evaluation and more than likely escapes a much worse fate.

For an individual to posses the qualities of a hero, he or she must show determination when others are reluctant of a situation. A hero must also be able to take over for others who may feel as though there is no other option but to give up. It was important for the author of this story to portray these qualities the main character of this story in order to give him a heroic persona.

As illustrated in this story, hero’s come in all shapes in sizes.

It is important that a hero isn’t always portrayed as the typical cliché of the night in shinning armor, or the hero that slays the dragon and wins the heart of the beautiful princess. It becomes apparent that hero’s can take the form of anyone with the characters necessary to take charge and get the job done for the good of all involved.

Determination and ultimately perseverance is the key to a successful hero. One must be able to identify the problem, evaluate it, and come up with a solution. Often times several attempts may need to be made in order to have a favorable outcome, and it is this determination that makes greatness. The ability to adapt and over come as the doctor did when the tongue depressor broke, showed the reader that he was not going to be swayed but such an event, and that he would find an alternative to this problem.

Towards the end of this story, the young girl was forced to undergo the doctor’s throat culture and more than likely began to realize that he was he wasn’t so much someone to fear, so someone who had only intentions to help her and make her life easier in the long run. Occasionally people need to be shown the light in order to walk out of the tunnel, and there is no better person to do this than the hero. An often dominant and strong willed individual will tend to be the one who triumphs in the face of adversity.

When the parents could do no more to help the girl, they called upon the doctor as their saving grace. They didn’t have the heart to force her to do something against her own will, despite the fact that it was for her own good. But when someone with less emotional attachment and the knowledge that she may have a fatal illness steps in, they day is saved and the young lady may be treaded accordingly. Rather than grow ill and possible die.

"The Use of Force" by William Carlos Williams. (2016, Jul 24). Retrieved from https://studymoose.com/the-use-of-force-by-william-carlos-williams-essay 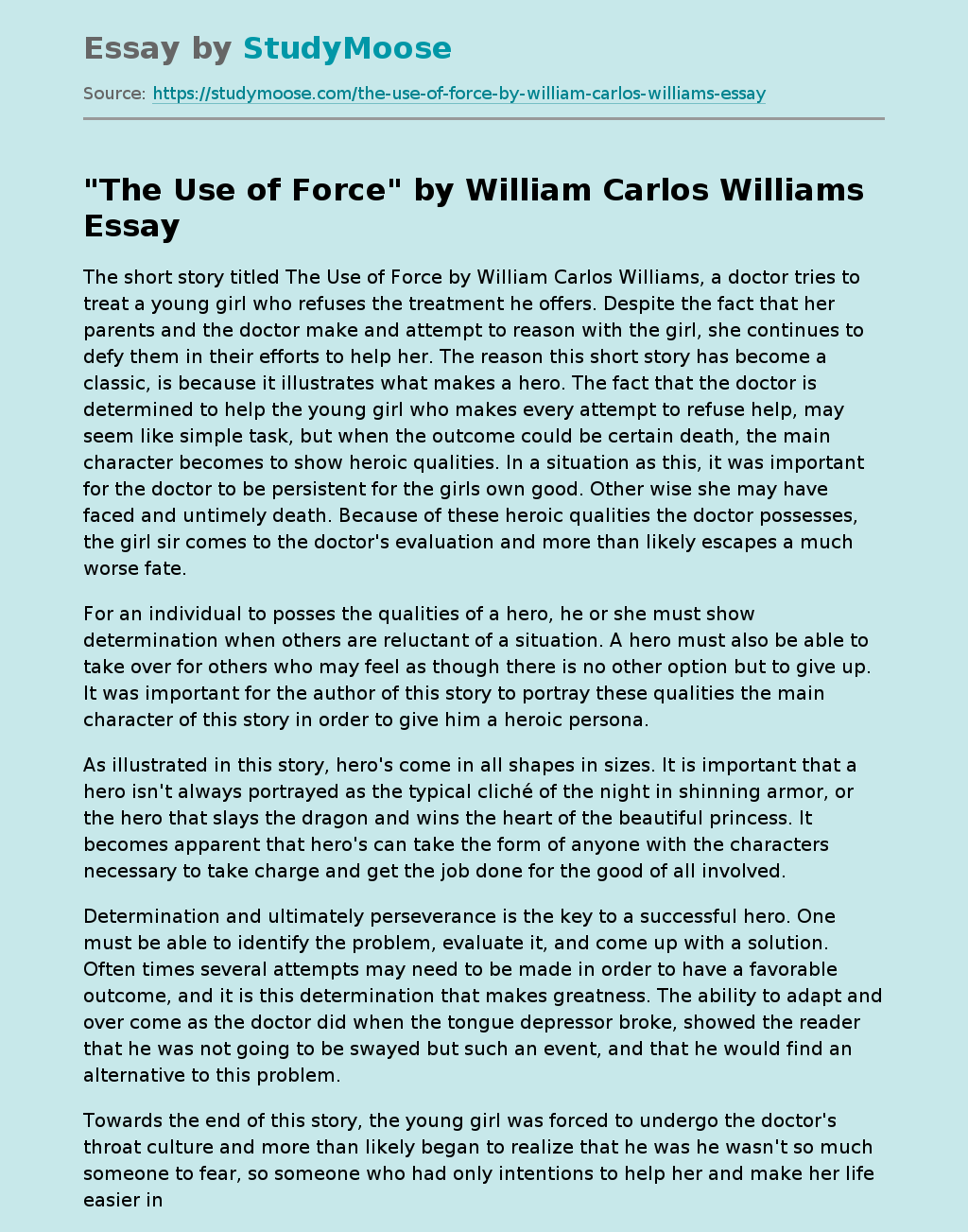