The Truman Show presents to us that the media can be very controlling and influences our lives. For example, Truman lives a perfect and happy life. This way of life is supposed to be the “American Dream” and the media is advertising this perfect life to the public. The media influences our lives in many ways such as magazines, T.V. and radio. The media wants us to live our life in a certain way. The media sets many expectations not only to how we live but also how we look, such as size zero models being promoted which increases the amount of people desiring to be thinner.

Truman shows this because his life is manipulated by the media through a universe of illusions pulled over his face; where nothing is real but he believes it is not only real but true. Truman is a happy person who lives the life of a well put together American. He has been chosen as the star of a media show because he was up against four other unborn babies that weren’t wanted by their parents.

Just so happened he was born first. He doesn’t know about it because everything in his life is controlled within the world’s biggest media studio ever.

He is influenced by the media by emotional manipulation and his actions are controlled. The town in which Truman lives, Sea Haven, is a giant dome decked out with high tech simulations of sun and sky, in which the rain and wind are courtesy of the special effects department.

Truman alone has no idea he is in a giant TV studio, as the rest of humanity watches him from one staged situation to another. He is trapped in his own life, held down in the surreal existence in which he has been forced to spend the last 30 years. A non-stop telethon of reality programming lets the audiences enjoy his most intimate moments. This “prison” that Truman has been placed in allows us to identify with him, because we feel his emotions, we follow his struggle for freedom and privacy, friendship and love, and his search for truth, in a world that he doesn’t understand. We follow him through the death and re-surfacing of his father, his battle to discover the truth and ultimately his journey for freedom, where he finally realizes the deceit in the life he has been leading, and comes face to face with harsh reality.

We experience his emotions in intimate close ups, tension filled moments accompanied by heartfelt music, and in times of great intimacy, special effects are used to heighten emotions. All these techniques enhance the relationship we have with Truman and the emotional responses this evokes, which allow us to identify with him. The Truman Show conveys the negative consequences of restricting the freedom of an individual, namely, Truman. We are presented with a world run by big business, shown through the manipulative character of Christof. We are positioned in opposition to Christof as he is focused merely on the ability to make money. In comparison, we sympathize with Truman as he is depicted as merely a pawn in Christof’s game. We are shown that every attempt to escape is blocked by malevolent simulators and high tech manipulators intent on keeping him inside. This is where values regarding basic human rights are explored; the fact that Truman’s life lacks vital elements – freedom and privacy.

He is stripped of this, as he is watched 24 hours a day, seven days a week and his life televised as a form of entertainment. This allows the audience to become very sympathetic towards Truman and identify with him through various technical codes. The scene in which Truman tries to escape contains action-filled shots in which he comes up against the barrier of defense in the form of a wall of fire; and the contrived radiation leak in which Truman’s frantic efforts to escape are foiled by the people who block him. The use of close ups of Truman’s distressed face and the suspenseful music, emphasize Truman’s desperation; as to create a sympathetic emotional response from the audience. The closing scene in which Truman ascends the staircase and exits his false world is heavily symbolic; climatic music is used as Truman is released and liberated from the false world he has been the star of for so long. We see through his endless attempts to escape, the recklessness of his actions in his search for answers, and realize the only thing that Truman is really searching for is freedom and above all else privacy.

In view of Truman’s life, we are privileged to information that Truman is denied and thus we are able to judge the accuracy of Truman’s relationships and his right to freedom of choice. The scene in which, in a flashback of Truman’s youth, his wife Meryl is shown flirting and being very inquisitive towards Truman, we sympathize with him. We realize she is merely an actor playing a role, in which she was placed; she had no real emotional feelings for Truman. She is just playing the role of his wife and thus Truman’s sense of love is distorted. Truman’s lack of the right of freedom of choice is enhanced when Sylvia, a woman that tried to convince Truman that he was a character trapped in a TV show, is taken away. She is forcibly removed from the set and in a close up of Truman’s confused face, followed by long shot in which Truman stands alone on the beach as the car is driven away we become fully aware of the control that Christof holds in his ability to manipulate Truman’s emotions.

Thus we identify with him, in a common need for ethical decency. His best friend Marlon highlights the deceit of the life he leads. The intense scene in which Marlon and Truman are sitting side by side on the pier, their faces dimly lit, accompanied by evocative and ironically sentimental music, and heightens the viewers sympathetic response. Marlon says ‘I’d never lie to you Truman’, and this statement implies the trust that Marlon has when in reality it’s the complete opposite. This deliberate irony that the audience is obscure to, allows the audience to sympathize with Truman, as we realize the extent to which Truman’s emotions are being manipulated. The people he relies on and holds closest are the very people deceiving him. The reality is that all the relationships that Truman is involved with are manufactured. Truman is denied his own rights to freedom of choice. Truth for Truman is established through the deceit and forged life that he has been placed into.

He is being misled into believing the lies that have been constructed for him to keep him unaware of the real events occurring around him. The scene, in which Truman discovers the object that falls from the outer fringes of the dome, is followed by a long shot of Truman’s puzzled face. This, as the audience is aware, is a camera but to disguise this fact from Truman it is backed up by a radio broadcast in which a falsified explanation is given to cover up any suspicions that Truman may have. We are able to sympathize because we as the viewer are aware of the manipulation taking place allowing Truman to accept what he is being told. The scene in which Truman’s father is reintroduced in a tearful reunion, in a fog on a dimly lit pier, enhanced by the emotive music increases the overall feeling of deceit. Christof exploits Truman in manipulating his feelings and concealing the truth from him. This is done in an effort to sustain his perfect TV show and keep Truman oblivious to the falsity of the life he leads. As the movie progresses the crew makes mistakes that cause the seamless illusion to break down and thus Truman figures out that his surroundings are full of staged scenes in which he discovers a camera crew behind an elevator.

This leads Truman to become very volatile and quite audacious. This false reality or dishonesty as you may call it is keeping Truman from realizing what is truly happening. Truman is being kept ‘ in the dark’, and unaware of what was happening around him which only heightens the viewers response of a need for honesty and truth. The Truman show presents certain attitudes and values through the identification of Truman, using various cinematic techniques. The naive and innocent character of Truman is developed through the use of evocative music, intimate close ups and action filled scenes in which we are able to identify with Truman because of the circumstances he has been faced with. The manipulation of Truman by the character Christof reveals the attitudes and values of freedom of choice and the right to make his own decisions in both life and love.

Together with the values of freedom and privacy that every individual deserves and the basis that lives should not be built on dishonesty and mistrust. All these values are reflected in this movie through the use of audience positioning, symbolism, camera work and audio effects, as we see the character of Truman manipulated and molded, under the guidance of Christof, in his greater search for ratings and power. We are able to directly relate to Truman as the way in which he is manipulated and deceived, allows us to see that he is no longer a man in a TV show, he is just a performing monkey in a worldwide circus. Just like Truman we can also be manipulated by the media not only by the celebrity gossip that floods our T.V. screens, but also in the news that is reported to us every day.

The media doesn’t just put information out there for us to absorb it and do nothing, it is manufactured to make us formulate an opinion on the subject whether in be good or bad, and often times the media is trying to persuade the public to agree with their opinion. The media today is quite similar to what is presented in the Truman Show because the end result is the same, the media is there to throw information out at the public whether it is true or false and it’s our job to not just sit there and take them at their word. This film was particularly effective because it shows that we can’t trust everything that is put in front of us, we need to learn to ask more questions and to not be satisfied with vague information. 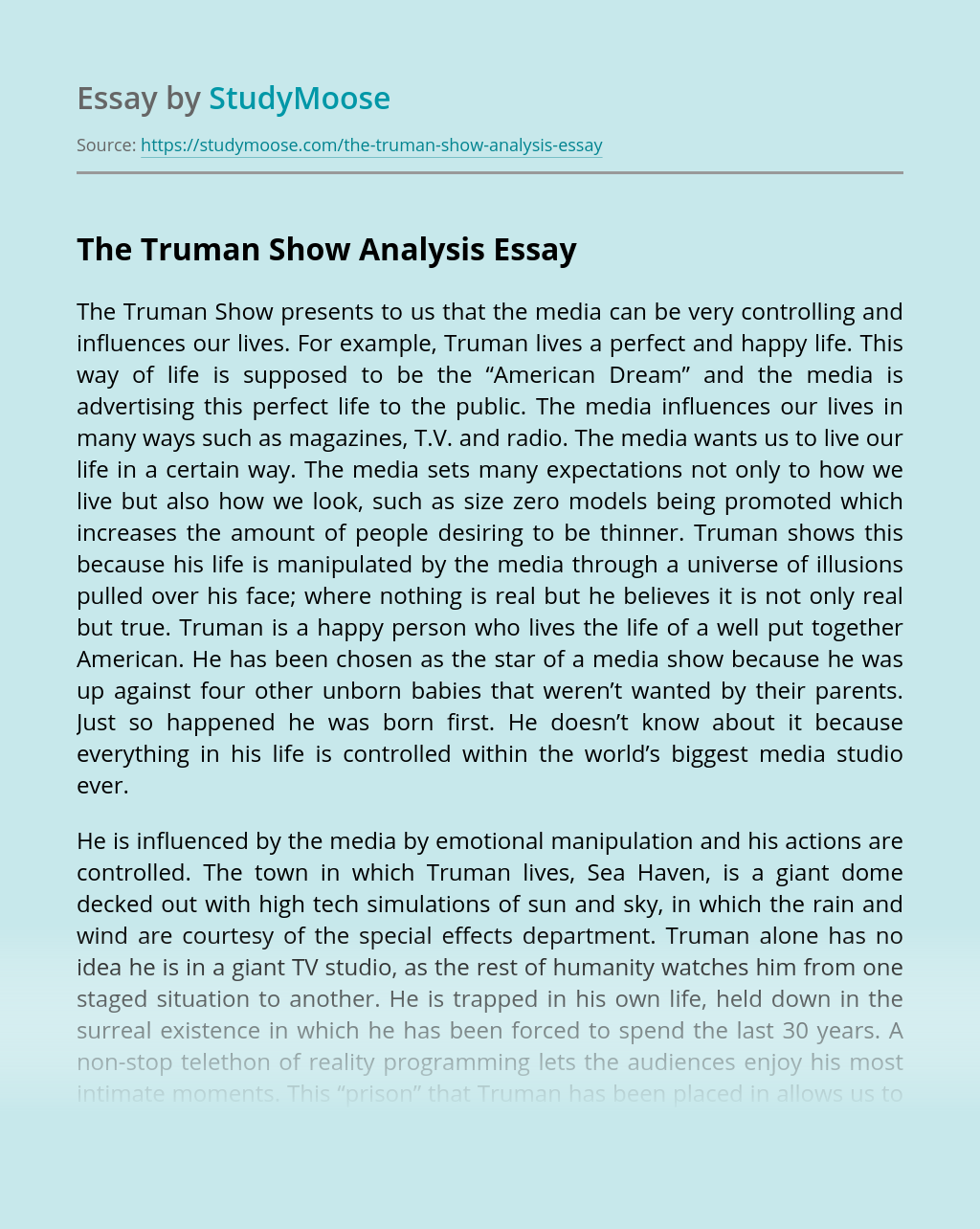 Don’t waste time
Get a verified expert to help you with The Truman Show Analysis
Hire verified expert
$35.80 for a 2-page paper
Stay Safe, Stay Original