‘The Truman Show’ is a comedy-drama film directed by Peter Weir. The film talks about a man – Truman Burbank who’s unaware of being in a reality television show for the whole of his life. The scene of Truman in the cellar is significant in the film because the audience is able to see the feelings deep inside of Truman and how it raises the tension. The camera shots and angles used in this scene illustrate Truman’s emotions perfectly. Meryl’s unreasonable clothing and voice elicits curiosity from the audience.

The setting of the scene matches with the mystifying signs that Weir has left. All these elements were composed with the objective of assembling the idea in audience’s mind that something is about to happen. In this scene, the real emotions of Truman Burbank are unleashed when he was alone. Firstly, the camera zooms in the lock as he carefully unlocks it to arouse audience’s curiosity. Then it zooms in the inside of the chest to make audience more eager to find out what he’s trying to do.

Followed by a long shot of Truman sitting down in order to make him look small. In order to finally show the audience what Truman was looking for and at the same time hint that he misses his dad pensively; there’s a close up on the photos of Truman and his dad that he’s looking at. In order to elicit more misery, there’s a medium shot on Truman sitting down looking at the photos to make obvious to the audience that he is distressed and also the reason of it.

When Meryl walks in, close up shots of her foot is on screen to notify that Meryl is coming.

After she walks in, when she is talking to Truman, it looks like she is tall because it’s a low angle on her while he is kneeling down. That was in order to suggest that Meryl is more powerful and fierce than Truman. The actors’ costumes and dialogue played a big part n building up suspense in the scene when Truman was in the cellar. Meryl was wearing a white dress and laced-up shoes thus looking very formal. Truman was just wearing a shirt and checkered shorts looking casual and relaxed.

The big contrast indicates that it’s illogical to wear such clothes that Meryl was wearing as she was in her own home. The tone of her voice also changed a lot. She sounded disappointed with how Truman upset his mother. He then asked her why she came down to the cellar, she replied in a cheerful and happy tone. Another suspicious action was when Meryl said, “You know, you really oughta throw out that mower. Get one of those new Elk Rotarys. ” The camera zoomed in her face as she smiled awkwardly. The purpose of this scene was to elicit curiosity.

This scene was set in a mysterious and shady cellar, which is exactly how the director wants it. The cellar was dim; it was just bright enough for the audience to see what was going on. The walls and rooms were filled up to illustrate Truman’s interests; which also reflects on his personality. In this scene, there weren’t any sound effects or background music. However, the sounds from what Truman was doing were amplified opening a lock and scavenging in the chest. That was in order to make the scene more thrilling as if something big is about to happen.

Meryl’s footsteps were also loud so it alerts Truman as well as the audience. The cellar and amplified sounds were hinting there was an unknown truth going to be revealed. Weir has planned this scene very carefully with the aim of making the film more intense and fascinating. He has used a variety of film techniques to bring about; many different camera angles- each serving its purpose, Meryl’s unseemly costumes and lines, and the set-up of the cellar. This scene focused on Truman’s feelings as well as building towards the climax, which makes it a significant scene. 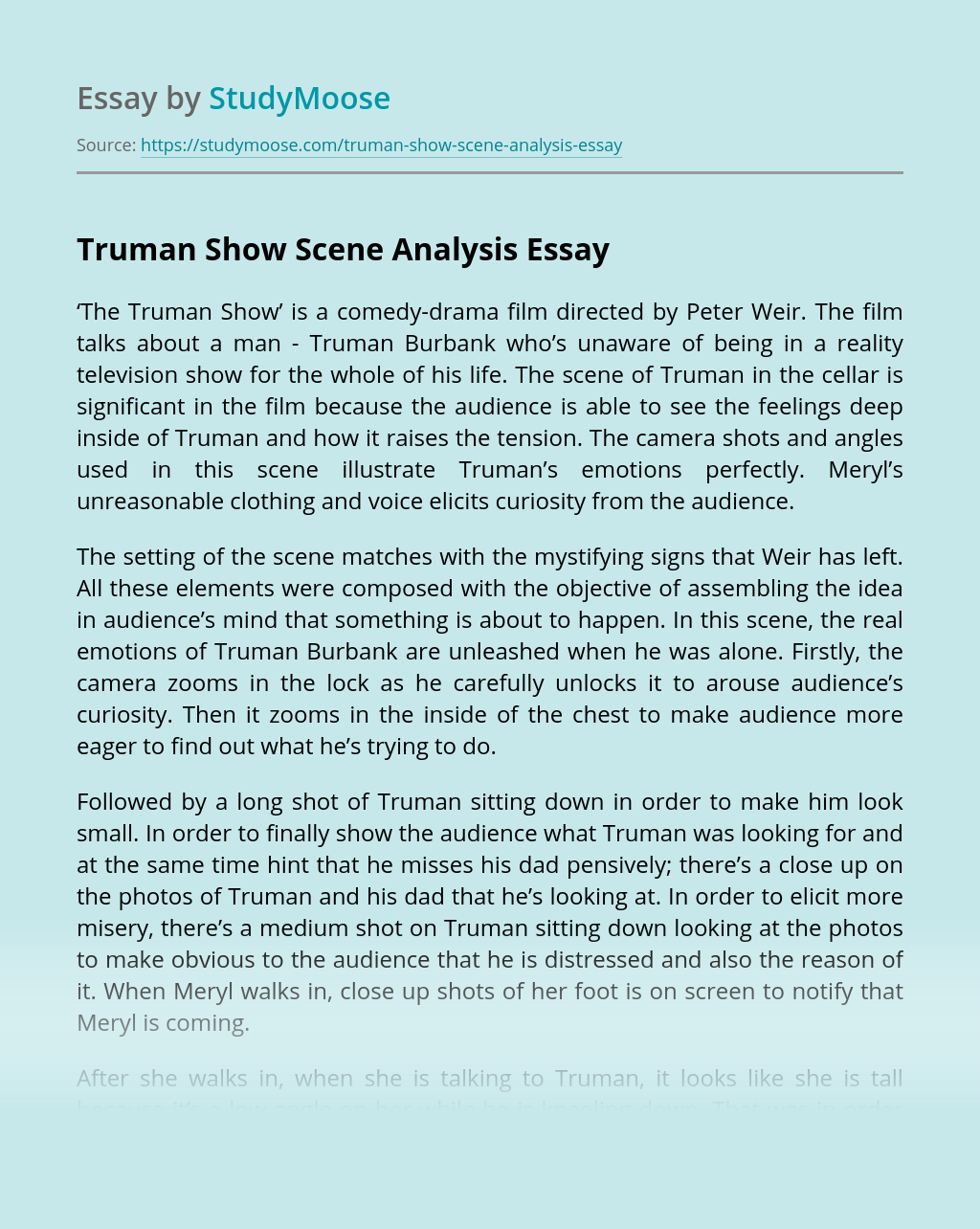