How does Shakespeare show the theme of hypocrisy up to Act 4, Scene 3?

Three of the main characters in this play; Angelo, Isabella and the Duke, are seen as being hypocritical. This hypocrisy centres on the theme of pre-marital sex. This theme is started by Claudio having sex with his bride-to-be, Juliet. This was usually seen as acceptable behaviour, but as Angelo, who is strict, moralistic and unwavering in his decision-making, has been put in charge by the Duke, he is starting to run things his way. He is going to punish Claudio with death for having sex with, and impregnating, Juliet.

Don't use plagiarized sources. Get your custom essay on
“ How does Shakespeare show the theme of hypocrisy up to Act 4, Scene 3? ”
Get custom paper
NEW! smart matching with writer

The only way that Claudio can be saved from death is if Isabella, his sister, has sex with Angelo. By attempting to bribe Isabella into fornication, Angelo is committing the same ‘crime’, if not a worse one, than Claudio.

Which had you rather…

Isabella argues to Angelo that many have committed the same offence, but have not been punished for it, to which Angelo replies;

These many had not dared to do that evil…

Had answered for his deed (Angelo, 11.

With this quote Angelo is contradicting himself, as he claims to believe that if the first one who had committed this offence had been punished, and then no others would have done the same. But Angelo is hoping to have sex with Isabella, out of wed-lock and only as a bribe to forsake the death of Claudio, therefore he is committing the same offence that he is punishing Claudio with a death sentence for.

It is evident that Angelo recognises this and comments on it, either as justification to himself, or to redeem himself publicly, saying;

The jury passing on the prisoner’s life…

Let mine own judgement pattern out my death

Angelo is almost admitting being a hypocrite, but validates himself by saying it is only wrong for hypocrites to administer justice if they get caught. Through none of this does Angelo once question his beliefs on justice or morality.

Isabella is an extremely religious person, and is abstaining from sexual activity in order to become a nun. Isabella believes that if she loses her virginity she will also lose her soul. This is why, when Angelo wants Isabella to sleep with him, she doesn’t even give it any consideration. Even though her decision will result in her brother’s death, there is no discussion on consideration of this matter in any detail. It doesn’t validate as an option to Isabella. This could be and everlasting argument, as on one hand Isabella is standing up for her principles by refusing to have sex with Angelo, but on the other she is sentencing her brother to death. Isabella claims this is entirely out of moral and religious concerns, but it seems she has herself in as top priority. There is the argument that Isabella should not need to have sex with Angelo, and is right to protect herself, but she could also be seen as being cold and selfish.

Contrary to this Isabella has a completely different opinion when it comes to anybody else having illicit sex. When Isabella hears of Claudio’s illicit sex with Juliet, she is of the opinion that there is no great harm done; O, let him marry her. (Isabella, I.4, 48)

Isabella has no difficulty in persuading Marianna to sacrifice her virginity in the plan that the Duke culminates. It becomes obvious that Isabella values her own virginity much more than anybody else’s.

The Duke argues that if Marianna has sex with Angelo, that it would not be committing a sin.

He is your husband on pre-contract.

By looking at it in this way it, can also be seen as no different to Claudio having sex with Juliet, as Marianna and Angelo were once engaged to be married. Despite this, it is still a great act of deception, which is not a quality that a nun, or a Duke for that matter, should possess.

The Duke is seen as being a good, kind, devoted leader, but his fault lies in his incapability to uphold and preserve order. Because of this he ‘leaves’ Vienna, putting Angelo with responsibility of the city, as he feels the city as become too sinful and hopes Angelo can clean it up. This could be a sign of cowardice by the Duke as he is leaving Angelo to do his dirty work;

I have on Angelo imposed the office,

Who may, in th’am bush of my name…

The supposed real reason is to test the virtue of the people in the city, as the Duke will not really be leaving the city, but staying dressed as a friar. This seems insincere of him as he does not appear very virtuous when he under mind’s Angelo’s authority by plotting against him. Despite leaving Angelo in charge, the Duke is still manipulating all events in the town. The Duke plans to trap Angelo by fooling him into thinking Marianna is Isabella, and therefore sacrificing Marianna’s virginity. He validates this by saying that the end justifies the means. This also shows hypocrisy on the Duke’s part, as he employed Angelo to clean up the city by becoming more severe in the way of shutting down brothels, and requiring abstinence before marriage, therefore making illegitimate births a thing of the past and protecting the city’s women. Regardless of this, he is the one initiating fornication, the exact behaviour he was hoping to stop.

The presentation of the theme of hypocrisy is helped along by the fact that none of the characters reconsider their beliefs about freedom, justice, sexual relationships or morality. These issues are never discussed meaning that the issue of hypocrisy can be presented effectively and in a more straightforward manner.

How does Shakespeare show the theme of hypocrisy up to Act 4, Scene 3?. (2020, Jun 02). Retrieved from https://studymoose.com/shakespeare-show-theme-hypocrisy-act-4-scene-3-new-essay 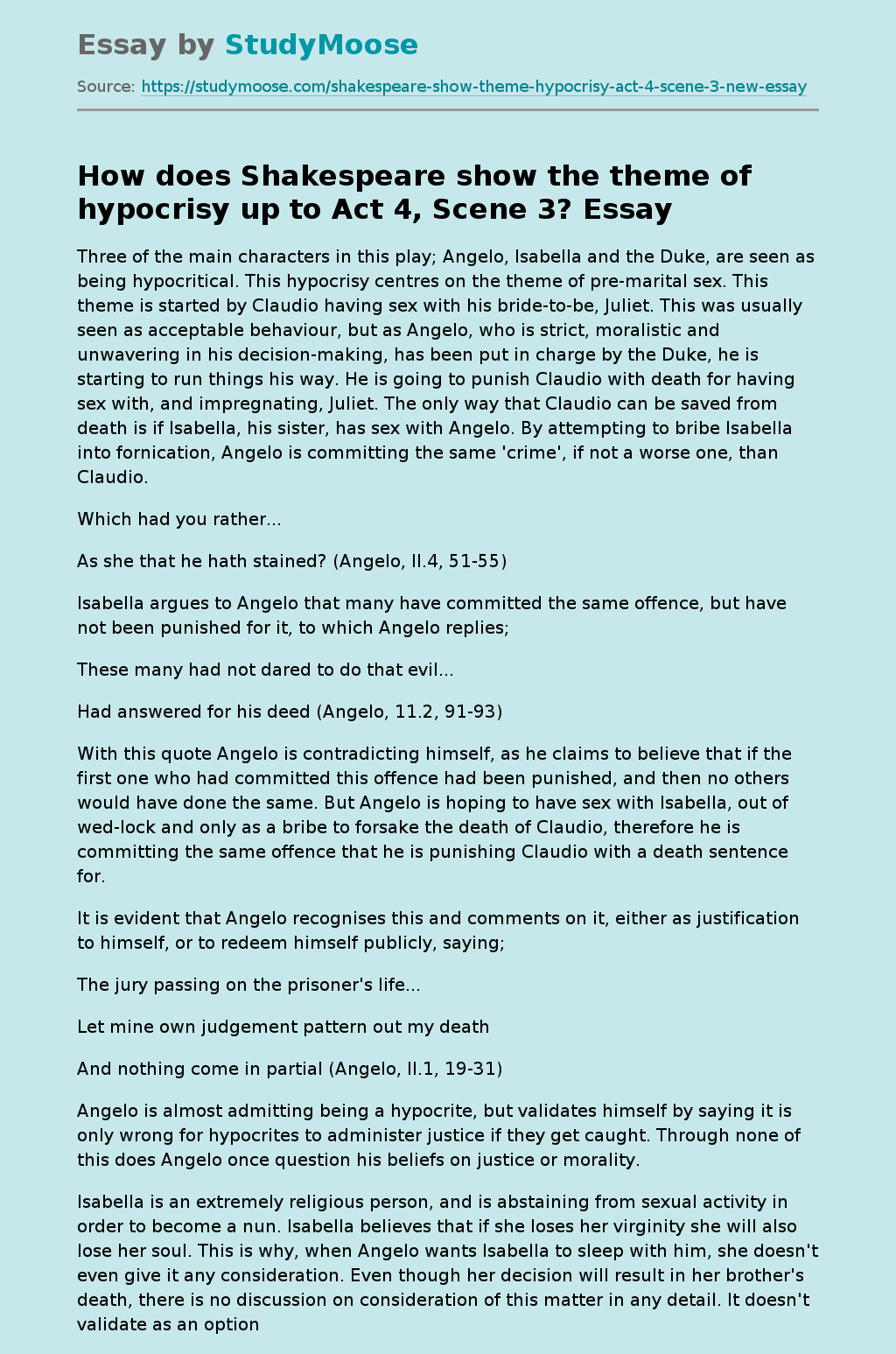