The train from rhodesia

In each of these stories there is clear lack of communication between the main characters and ignorance of the local culture. In ‘The Young Couple’ there is confusion of feelings and misinterpretation of the future; they both have different opinions of what is going to happen and assume the other thinks the same. ‘A Stench of Kerosene’ features a choice that leads to a lack of communication. “Neither understood each other’s thoughts” ‘The Train from Rhodesia’ is an example of poor communication leading to a misunderstanding which causes the main change in each of the stories.

Don't use plagiarized sources. Get your custom essay on
“ The train from rhodesia ”
Get custom paper
NEW! smart matching with writer

They become the catalyst for change. Similar to ‘The Young Couple’, it is unknown how their relationship started, however at the beginning of the story the couple are happy and satisfied. This changes rapidly throughout their journey as the woman realizes her views, in relation to artist’s work, differs significantly from her husband’s, which changes everything. ‘A Stench of Kerosene’ is the most serious and shocking of the three stories.

Manak and Guleri, the two main characters, are expected by their culture, to fulfill their roles in society; to carry on the family name.

Guleri visits her home town only once a year; married women have to stay with their husbands but she visits annually for a town fair. She begs Manak to go with her but Manak pleads with Guleri to stay, the reason is unknown to both Guleri and the reader, however, it is later revealed that Manak’s mother was proposing a new wife for him who could fulfill the tradition.

After Guleri finds out the news, she drenches herself in kerosene and lights herself. After that, Manak finds it hard to recover and after his new wife has his son, his only reaction is, “Take him away!

He stinks of kerosene! ” Manak is so hurt by his wife’s suicide that his mental state is affected and he ultimately loses his sanity. Guleri and Manak’s relationship is not ideal for their culture, although they may not feel the need to have children; it is what their parents and culture expect of them. In each of the stories, something occurs to alter the couple’s relationship and each of the things that occur, happen because the culture enables them to. In ‘The Young Couple’ the relationship gradually changes as the family becomes more involved in Naraian and Cathy’s relationship.

Cathy feels smothered by their involvement. Cathy becomes pregnant, at which point the family invades the couple’s home and control how and where they eat, illustrated by a chef being provided with strict orders to only take instructions from her mother-in-law. The story ends as Cathy and Naraian are about to move into the family’s house. Cathy has become powerless; she tries to hold on to their little flat because it’s the only thing that she feels still belongs to her and has not been overtaken by anyone.

Cathy becoming pregnant is the catalyst for change in this story, because as this happens, the family becomes even more involved in their relationship as it almost seems to give them permission to invade the couple’s relationship even more, however the only reason the family become such a large part of their relationship is because it is normal cultural behaviour. The ways in which the story changes contrasts with the other stories because it is more gradual, where as the others have sudden events. In ‘A Stench of Kerosene’, Manak’s mother brings in a new wife for him to marry.

This is where the story begins to change, however the catalyst is when Guleri dies. After Guleri dies, Manak becomes, “… mute with pain… ” Together, Manak and Guleri didn’t feel they “had” to have children, they just enjoyed being with each other and therefore probably felt like they did not owe their culture anything as well as it did not owe them anything. However, when Guleri takes her own life, it seems as if culture has taken something from them without advanced warning. Manak is overcome with guilt, sorrow and regret; grief enough to drive anyone insane. As a result, the grief overpowers him.

In ‘The Train from Rhodesia’, the story is set to change when the woman looks at the carving, with interest. Although, the catalyst is when her husband bargains and buys the carving for her at an extremely low price. This causes her epiphany. These stories are similar, they both include an event that is the overall cause for change but the also have something along the way that speeds up the reaction. Many linguistic devices are used throughout all three of the stories, for example, ellipsis; to suggest a continuation after the sentence has ended or to emphasize the previous list can go on for longer.

This happens in ‘The Train from Rhodesia’. In this story, around the time of dramatic change, short sentences are also used to emphasize anger and descriptive context is commonly used. As a contrast, in ‘The Young Couple’, long sentences are used to point out boredom and repetition. “… in the silver, the waist-high vases, the brocade curtains, the carpets, the giant plumped-out cushions… ” This technique is highly effective. In ‘A Stench of Kerosene’, speech is used regularly and it reveals how the characters feel and think so less linguistic devices are used.

Paragraphs are also quite short and sentences are extremely descriptive similar to ‘The Young Couple’. This suggests metaphorical suffocation as there are so many details to digest it is nearly impossible to make sense of them without feeling intimidated. After the change in each story there is obvious conflict between characters. In ‘A Stench of Kerosene’ one of the main characters is no longer directly in the story, but affects everything that happens from that point. In the other two relationships, the atmosphere seems like it cannot be resolved.

Respect has been lost from each character and the relationship is no longer as new or exciting as it once was. It is hard to decide the most effective plot out of each of the stories. They each are strong examples of young people becoming over powered by either their own or indeed different culture. Each story has a disappointing ending, not because the standard of writing has deteriorated but because the endings lack the ‘happy’, ‘feel good’ factor. However, each story is extremely successful in displaying how a modern approach to life can still be deeply influenced by culture and tradition. 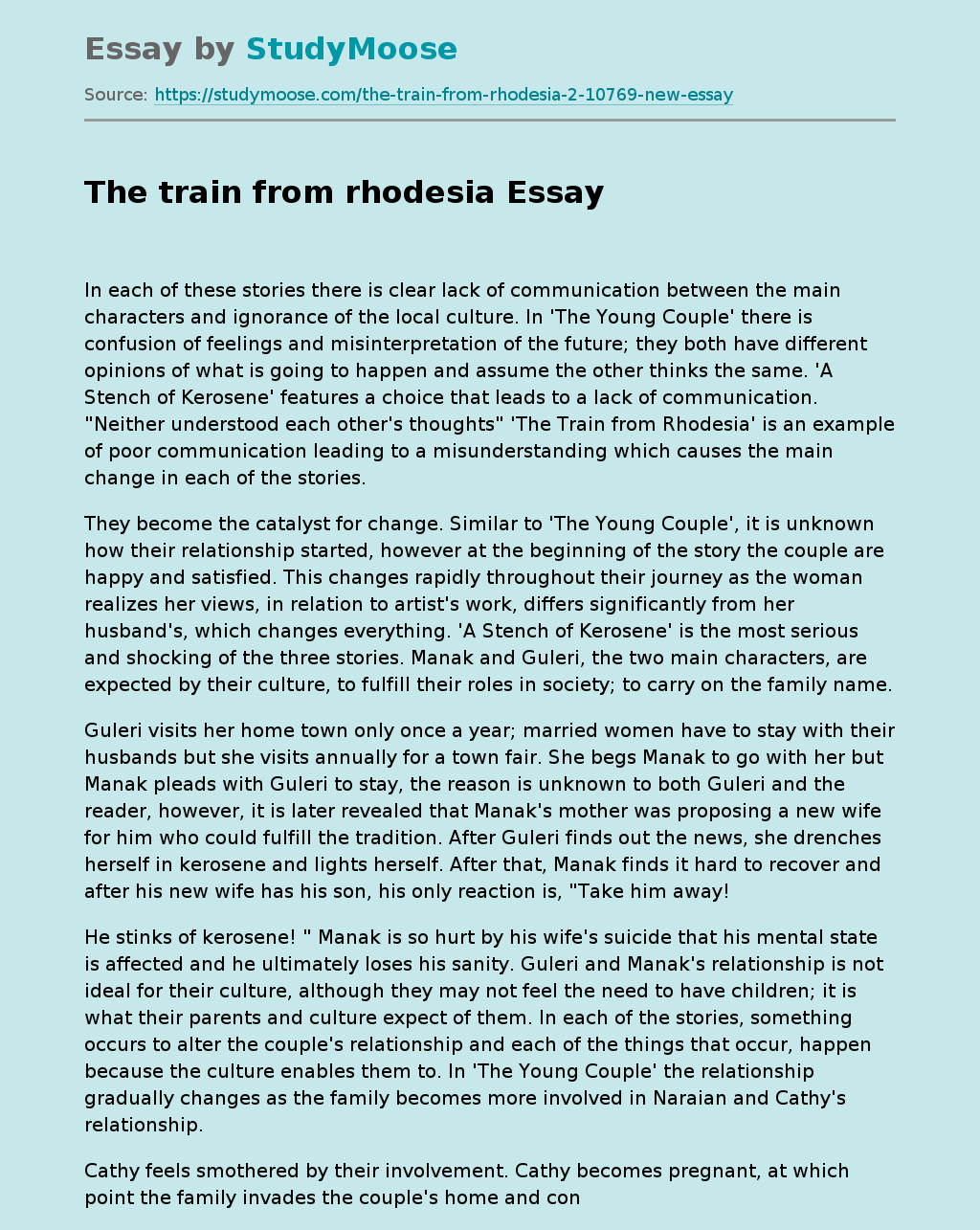