The English settlement in America occurring around the early 1600’s was the result of the Age of Exploration in addition, the freedom from religious oppression. For the Separatists later known as the Pilgrims, America was a place for dreams and new beginnings given that they were persecuted for their religious beliefs in England. Some fled to the Netherlands finding religious freedom and no work. The Pilgrims however, settled in America. Moreover, the Puritans came to America to practice their religion freely.

They strictly enforced their religious regulations in result of the little tolerance they themselves obtained from different beliefs. Due to this lack of tolerance people began forming new colonies. England had three colonial groups identified as the New England, Middle and Southern colonies. Three admirable colonies that may be pointed out from each group are Massachusetts from the New England colonies, Pennsylvania from the Middle and Maryland the Southern colonies.

Massachusetts has played a significant role in American history, most importantly in the lives of Puritans.

In 1629 an assembly of Puritans had formed the Massachusetts Bay Company, which later received a royal charter to establish a colony north of Plymouth. The company had selected John Winthrop a wealthy English Puritan lawyer, to be the colony’s governor. In 1630, Winthrop also became one of the leading figures in founding the Massachusetts Bay Colony, the first major settlement in New England after Plymouth Colony. He guided about 900 people to Massachusetts Bay where most of them settled. More settlers followed. During the 1630’s, more than 15,000 Puritans journeyed to Massachusetts to escape religious persecution and economic hard ships in England.

This movement became known as the Great Migration. As one of the most important of the New England colonies, Massachusetts became a leader in resisting British oppression.

Pennsylvania was a colony of hope and served as an experiment for a new beginning. The Quakers discovered the colony, a Protestant group who had been persecuted in England. They believed that everyone was equal and that people did not need to follow the teachings of a religious leader to maintain a connection with God. Quakers also apprehended the role of pacifists; individuals who refuse to use force or fight in wars. In 1680 King Charles bestowed William Penn, a wealthy English Quaker, with land in payment for the debt he had owed Penn’s Father. William Penn viewed Pennsylvania as place where freedom of religion was acceptable. He saw it as a “holy experiment,” an opportunity to exercise his Quaker principles. Being an active proprietor Penn designed the city of Philadelphia himself, wrote Pennsylvania’s first constitution and advertised the colony in Europe. In 1701, the Charter of Privileges was published in which Penn allowed colonists to elect their representatives. Pennsylvania became the most prosperous in both the Middle colonies and America.

The dream of Sir George Calvert, Lord Baltimore resulted in the uprising of Maryland. Calvert received the propriety colony north of Virginia from Charles I. Unfortunately, soon after receiving this grant Calvert died, leaving his son, Cecilius, to inherit the colony. Besides the boundary that the Calvert and Penn families argued over between Maryland and Pennsylvania, religion was another main source of conflict. The Calverts welcomed Protestants as well as Catholics but nevertheless, Protestants outnumbered Catholics. The Act of Toleration was established to protect Catholics in 1649. This act ensured Protestants and Catholics the right to worship freely. Due to the establishment of an official Protestant church, tensions continued, having Catholics face the same restrictions they had in England.

All in all, Massachusetts, Pennsylvania and Maryland were the results of different religious groups seeking the freedom of religion from England. They each played a significant role in American history, revealing to colonists a gleam of from England’s persecution ways and an open door leading to the first step of independence and hope. 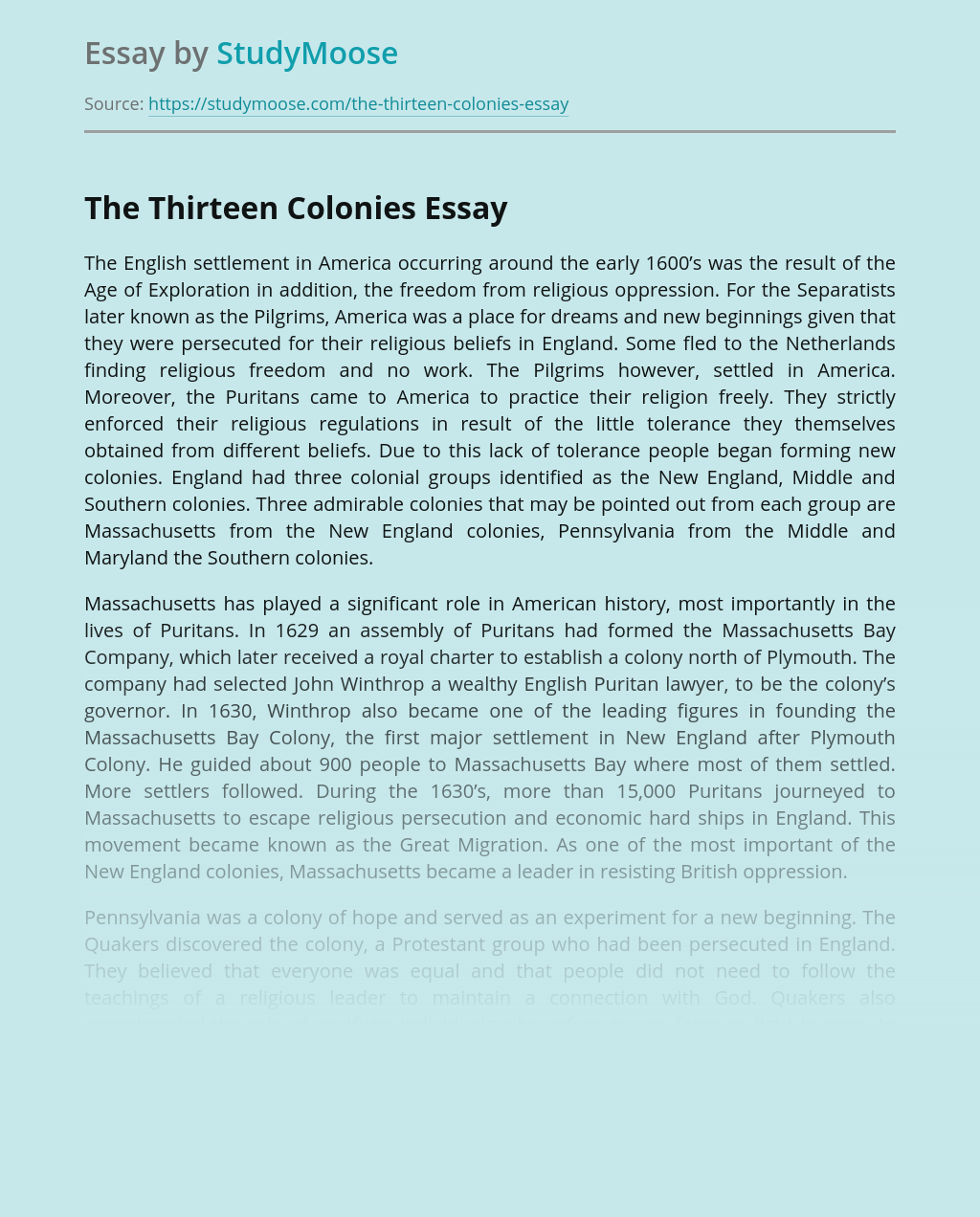 Don’t waste time
Get a verified writer to help you with The Thirteen American Colonies
Hire verified writer
$35.80 for a 2-page paper
Stay Safe, Stay Original