The novel “Pride and Prejudice” by Jane Austen was set at the turn of the nineteen century, where women had little choice. Generally when reading this novel it may seem as if Austen is reinforcing or eroding sexist stereotypes of women. Rather than approving the stereotypes, she makes the reader aware of them through characters such as Mrs. Bennett whom portrays the typical way one thought of marriage during the turn of the nineteen century when women were looked as an object to marry of to a man rather than a human whose feelings mattered.

Don't use plagiarized sources. Get your custom essay on
“ The Situation of Women in Pride and Prejudice ”
Get custom paper
NEW! smart matching with writer

Austen also uses Elizabeth Bennett to show a non stereotypical woman of that time. Elizabeth is more focused on finding someone she loves rather than marrying anyone to simply satisfy her mother. Although the novel may portray stereotypes of sexism, Austen uses Elizabeth to show how marriage is just and obsession and that women should have a say in who they spend the rest of their lives with rather than being seen as adjuncts to the male.

During the turn of the nineteen century women had very few rights and choices. Women were constantly dependent on men, as daughters they where dependent on their fathers until they married. For this reason women were encouraged to marry base on status and fortune so that they would be taken care of. Austen uses Mrs. Bennett to make the reader aware of the stereotypical thinking of a mother during this time. When Mrs. Bennett hears of Mr. Darcy she is interested because he is “a single man of large fortune; four or five thousand a year.

” (3) She is not concerned about how her daughters may get along with this gentleman, or even if he has moral.

The fact that he has impressive social status is enough for her allow him to marry on of her daughters. It is almost as if her daughter is an object and she wants to find a buyer and get rid of her as soon as possible. Another example of this is when Mr. Collins comes to visit the Bennett family and decides to propose to Elizabeth who is repulsed by the idea and refuses. Mrs. Bennett tries to force Elizabeth to marry Mr. Collins solely on the fact that he will inherit their estate. Mrs. Bennett is willing to marry her daughter to any man, in her mind “marrying nearly any husband is more pleasant that remaining single and poor.” (237)

Elizabeth on the other hand does not agree with mothers thinking, she believes that marriage should be based on love rather than social status and fortune. She proves this by “[refusing] to give up her self respect by marrying the foolish Mr. Collins.” (238) When Elizabeth does this Mr. Collins is very surprised, he almost does not accept no for an answer. He assumes that since he has chosen Elizabeth to be his bride that she must simply agree.

Austen uses Elizabeth to show how marriage is just and obsession, marrying someone of good fortune does not necessarily mean you will end up happy. She goes against the stereotype that her mother portrays in the story and shows that women should have a say in who they marry. She doesn’t do what is expected of her , she makes up her own mind and does what she believes is right. Although it is very” common for a women to marry a husband to save her from spinsterhood or to gain financial security,” Elizabeth realizes that her happiness is more important than financial stability.

The Situation of Women in Pride and Prejudice. (2017, Oct 24). Retrieved from https://studymoose.com/the-situation-of-women-in-pride-and-prejudice-essay?post 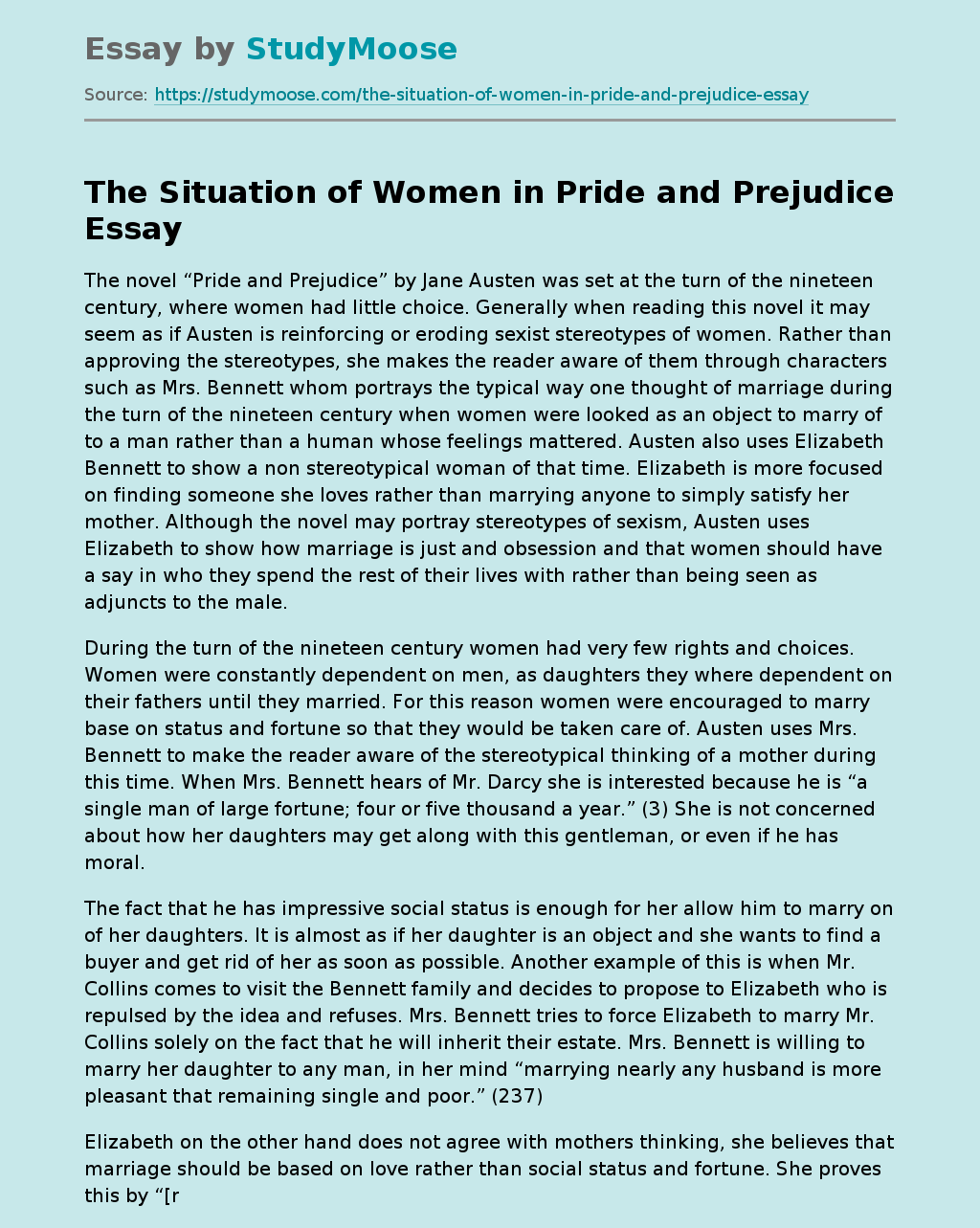