The situation of the world in rizal time

In the time that Rizal was not yet born, the entire Philippines was still under the Spanish colonization, all the uprising of Filipinos against the oppression of the Spaniard did not prosper due to the advantage of Spanish weaponry in that time. The rebellion of Francisco Dagohoy, the longest uprising against Spain which lasted 8 years but still defeated is a good example of this circumstances.

The whole of the country was headed by a Governor–General, a deputy of the king and with the sole authority with regards to economic and political management of the country.

Turn in your highest-quality paper
Get a qualified writer to help you with
“ The situation of the world in rizal time ”
Get high-quality paper
NEW! AI matching with writer

Furthermore, because one of the reason for Spanish colonization is religion, The clergies were also vested with a certain authority towards the church, but in the time of Rizal the power of the friars was not only set within the walls of the church, but also in politics.

The families of Rizal are wealthy landlords of Calamba, Laguna. His parent were of Malay and Chinese heritage, both of them were wealthy and educated, they socialized with leaders of the society, the house of Rizal is the biggest private library in the Philippines in that time and they managed to send their children to best schools.

Nevertheless, Lorenzo Alberto Alonzo, Rizal’s maternal grandfather, was one of the delegates in the Manila assembly from were a deputy of the Spanish cortes was to elected as provided by the new Spanish constitution.

In 1861, when Rizal was born, a great crisis occurred within the church when the archbishop of Manila, Jose Aranguren died and succeeded by a Spanish mestizo, Father Pedro Pelaez who risen in the position of vicar capitular – a term used by the canon law to fill the vacant position of the archbishop within the diocese.

Pelaez became the brainchild to the total participation of the natives or Indios, as they were called, as priests of the new reformed church. He also acted upon the successive decrees which handed the parishes over the religious orders. Now, the revolution against Spain was not only situated within the battle fields of the land but also inside the church itself.

In January 20, 1872, in Cavite, a mutiny of Filipino soldiers and peasantry leaded by a mestizo sergeant named Fernando la Madrid took place at Fort San Felipe. The cause of this military uprising is believed to be order of Governor-General Rafael de Izquierdo to subject soldiers to personal taxes, from which they were previously exempted. The said tax requires them to pay a monetary sum and also to serve under forced labor called, “polo y sevicio”. The mutineers believed that the rebellion they have started shall escalate into the national level. Within two days the mutiny was dissolved when the Governor-General immediately sent reinforcement to Cavite and the manila rebellion wing did not respond on the insurrection. Thus, they were outnumbered and destabilized by the Spanish armed forces, while sergeant la Madrid was killed in the skirmish.

According to the report issued by Governor-General Izquierdo, the Cavity mutiny of 1872 was an act of treason and rebellion against the Spanish government, in the sense that, they wilfully planned to overthrow the government and to establish their own, a clear violation to constitution. Izquierdo also added that all liable to this threat to the security of the Spanish colony should be punished by death. Furthermore, he also declared that the architects of this conspiracy were merely Filipino educated leaders such as; businessmen, abodadillos or native lawyers and native clergymen.

The Filipino priest namely; Mariano Gomez, Jose Burgos and Jacinto Zamora were court marshalled for the grounds of treason, they were, according to the report, preside as leaders of the new government. For such reasons, to install fear upon the rest of the natives and to eradicate secularism inside the church, the GUMBORZA were executed by means of garrotte or by strangulation.

The execution of the friars had a great impact to the Mercado y Alonzo’s because their son Paciano, the older brother of Rizal, was a known student of Father Burgos in Ateneo de Municipal and allegedly a member of the mutiny.

In the midst of the situation, Rizal also witnessed the cruelty and injustice of the Spanish authority when his mother once became a victim of legal vengeance. His mother, Doña Teodora Alberto de Alonzo was accused of attempted murder when she allegedly tried to kill her sister-in-law by poison. A corrupt court led her to incarceration of almost two and a half years. According to historians, the sister-in-law of Doña Teodora had a secret affair with the head of the Guardia Sybil.

In Rizal’s time, Spaniards are not only in the control of politics, the church, but the education as a whole. The friars were the head masters of schools in the Philippines at the time, in fact, the schools are owned by them. They controlled the educational curriculum, making the way to put Christian and religious teaching on the priority of learning from the elementary until the tertiary education. Teachers do not put great emphasis on native language, as well as with science and mathematics, but a bigger part on theology of Christian doctrines and Latin.

At first the schools were only exclusive for Spanish born citizens, not until the start of the 19thcentury that it was also opened for Filipinos, provided that you came from a known and wealthy family of the society. Although the Filipinos are now accepted as students, the friars still believed that Filipinos cannot match the natural born talents and skills of a pure Spanish. They strictly imposed total discipline that whoever fails to observe shall be subjected to corporal punishment. The friars are very concern about morality and sexes of their students. Thus, the boys and girls were literally separated by establishing schools exclusive only for the other.

The students of colleges in Rizal’s time were guaranteed with degree in Bachelor of Arts or Bachiller en Artes. In 1859, in Manila, the firs college for boys was established by Jesuits as Colegio de san Ignacio. In Cebu, they established Colegio de San Idelfonso. In 1601, the Colegio de San Jose was built. In addition, in 1589, the Escuela Pia was entrusted by the government to the Jesuits. Later this was called as Ateneo de Municipal or today the famous Ateneo de Manila University.

The Spanish government did not expect that educating Filipinos would mean danger on their part. In fact, to ensure their interest they pattered the education to the Spanish life style. Their primary belief is that, they are just making politics on some wealthy Filipino aristocrats, but they were wrong. This openness of the Spanish government toward the Filipinos to obtain equal rights for education was the birth of a true freedom and the predecessor of a revolution to gain our independence.

Filipinos who bear the seals of Spanish “Coligeos” are referred to as “Ilustrados”. The Ilustrados are the architects of the movement to, if not totally eradicate, reform the rotten Spanish government by giving equal rights to the Filipinos on the same level that of the Spaniards.

Rizal and his fellow Ilustrados established organizations and publications which criticizes the Spanish way of governing the Philippines. This also led to a nationwide uprising of the Filipinos to achieve independence leaded by Andres Bonifacio and Emilio Aguinaldo.

The situation of the world in rizal time. (2016, Apr 05). Retrieved from https://studymoose.com/the-situation-of-the-world-in-rizal-time-essay 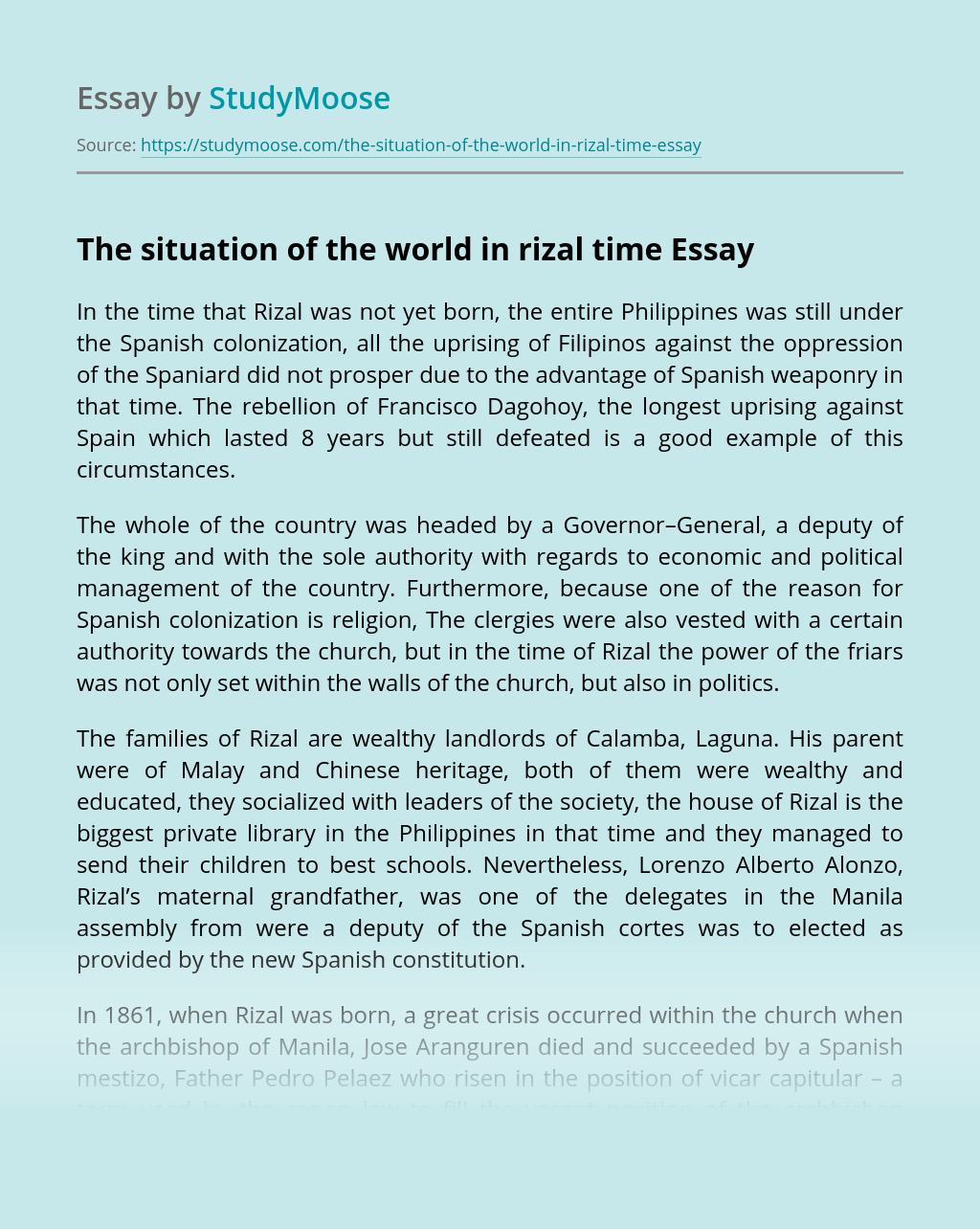 Turn in your highest-quality paper
Get a qualified writer to help you with
“ The situation of the world in rizal time ”
Get high-quality paper
Helping students since 2015
Stay Safe, Stay Original