During the 1970’s, psychologist Mary Ainsworth further expanded upon Bowlby’s groundbreaking work in her now-famous “Strange Situation” study. The study involved observing children between the ages of 12 to 18 months responding to a situation in which they were briefly left alone and then reunited with their mother (Ainsworth, 1978). Based on these observations, Ainsworth concluded that there were three major styles of attachment: secure attachment, ambivalent-insecure attachment, and avoidant-insecure attachment.

Don't use plagiarized sources. Get your custom essay on
“ “Strange Situation” Study ”
Get custom paper
NEW! smart matching with writer

Numerous studies have supported Ainsworth’s conclusions and additional research has revealed that these early attachment styles can help predict behaviours later in life. Ainsworth and Wittig devised the strange situation to be able to test the nature of attachment systematically. The aim was to see how infants that were aged between 9 and 18 months behave under conditions of mild stress and also novelty.

Stress is created in the strange situations by the presence of a stranger and by separation from a caregiver.

This tests stranger anxiety and separation anxiety respectively. The strange situation also aims to encourage exploration by placing infants in a novel situation and thus tests the secure base concept. The research room is a novel environment, a 9 x 9 foot square marked off into 16 squares to help in recording the infant’s movements. The procedure consists of eight episodes, each designed to highlight certain behaviours.

In the strange situation data is collected by a group of observers who record what the infant is doing every 15 seconds.

The observer notes down which of the following behaviours is displaced and also scores the behaviour for intensity on a scale of 1 to 7. Ainsworth et al combined the data from several studies, to make a total of 106 middle – class infants observed in the strange situation. They found similarities and differences in the way that infants behaved. In terms of similarity it was noted that exploratory behaviours declined in all infants from episode 2 onwards, whereas the amount of crying increased.

Proximity- seeking and contact maintaining behaviours intensified during separation and when the stranger appeared. Contact – resisting and proximity – avoiding behaviours occurred rarely towards the caregiver prior to separation. In terms of differences, they found three main types of children , originally called A, B and C to avoid any descriptive labels. The characteristic of the main attachments types , with respect to the strange situation are secure attachment, insecure – avoidant, insecure – resistant and the fourth attachment type proposed by Main and Solomon (1986) is called the insecure – disorganised.

A criticism of this study is that there were demand characteristics present, this is when participants try to make sense of the research situation that they are in and therefore adjust their behaviour according to it. The demand characteristics present in the strange situation are that mothers would change their behaviour in order to appear as a good mother in front of the experimenter. This is a problem because it means that the results obtained aren’t based on natural behaviour by the participants thus affecting the conclusions gathered from the study.

Since this study only used middle- class north Americans, this becomes a big disadvantage of this study. This is because it decreases the population validity which is the extent to which the results from this research can be generalized across other groups of people in society. This is a problem because it means that these results cannot be used against other people who are not middle-class north Americans thus decreasing the validity of these results.

An advantage of this study is that it is very influential as it enables us to assess whether or not children are securely attached and how this attachment type relates to later behaviour. For example if a child is insecurely attached at childhood then later on at adulthood the child could have problem attaching to someone else eg. husband/child. This is a benefit as it enables us to determine which behaviour caused by parents at a child’s early age causes a child to become securely and insecurely attached thus preventing any dysfunctional behaviour in adulthood. 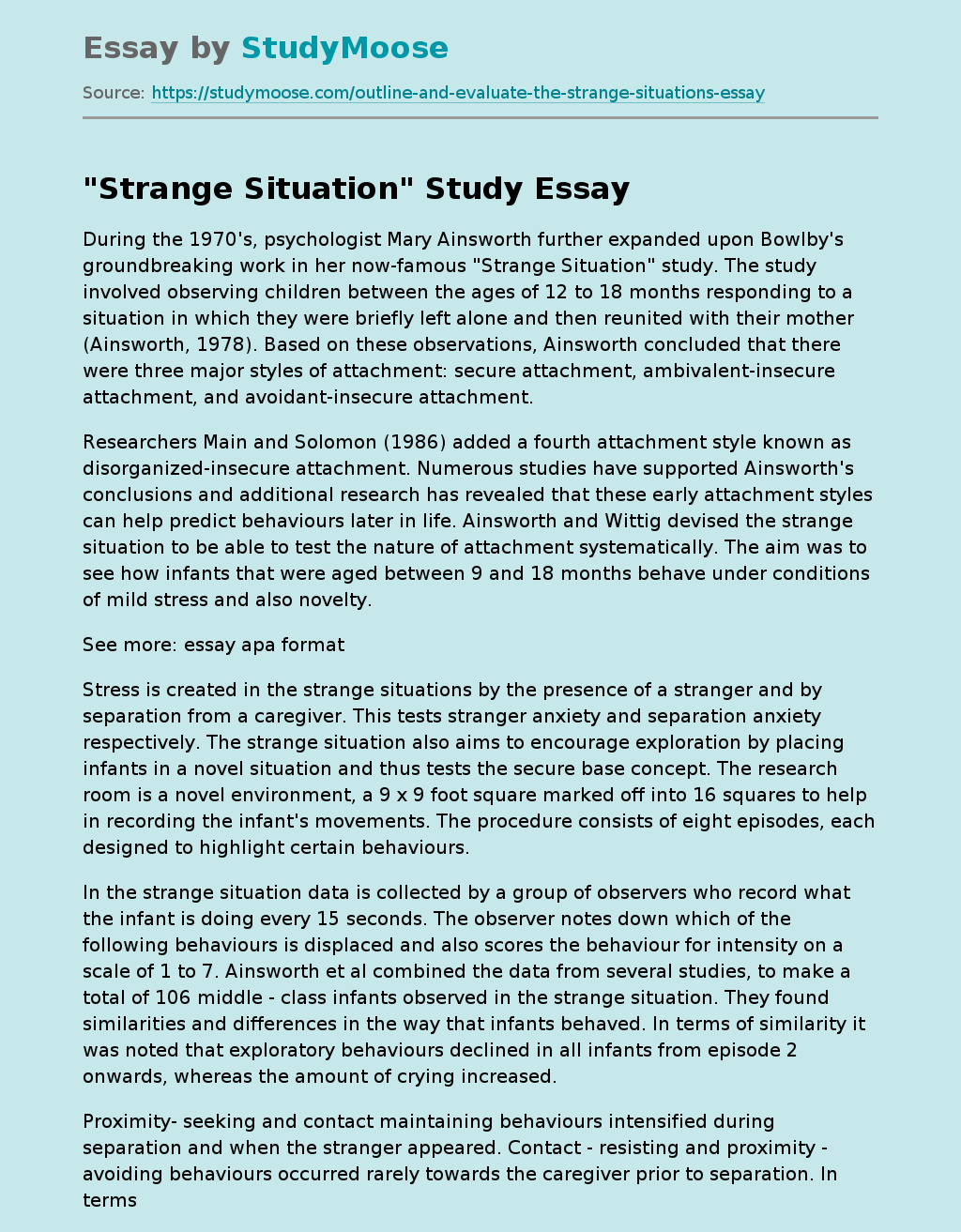