Seoul is the capital of South Korea with a population of 10,297,004 (one fourth of the total national population) as of the end of 2005. The total area of Seoul is 605. 52 square kilometers, which is only 0. 6% of the country’s total area. . The Hangang River divides the city into two parts: the northern part (called Gangbuk) and the southern part (Gangnam). The Gangbuk area totals 297. 97 square kilometers while Gangnam is 307. 55 square kilometers. Seoul is divided into twenty-five autonomous administrative units called ‘gu’. In 1394, Seoul had become the capital of South Korea and since then the population of Seoul has grown 110 times.

Due to rapid migration from rural to urban areas, the city has grown since the administrative reorganization in 1973. A rapid growth of cities around the capital took place after 1970 (Seoul Metropolitan Government). Rapid economic development took place in Korea during the 1960s and 1970s, and a large number of people migrated from the rural areas to Seoul. In the beginning, the migrants constructed their own houses without the consent of the city government, with low quality housing materials, and in an unplanned way (Ha- b).

The first unplanned (unlicensed) occupation in Korea occurred during Japanese occupation in the form of “mud hut villages”. These were a collection of houses with straw matting roofs and were found in the steep mountain slopes and at the bank of small streams; the mud hut dwellers were very poor. After their independence in 1945 and the Korean War in 1953, a huge number of people migrated and formed ‘shanty towns’ at the outskirts of the city (Ha, Shin and Seong).

Housing was a major problem faced by most of these cities in developing countries and the same applies to Seoul. This paper will examine the current housing situation in Seoul, the government’s initiatives and policies to improve it, and will provide some suggestions in the conclusion to overcome these problems.

Houses increased annually by more than 5% in the 1960s and 1970s, but this was insufficient to meet the demand of the growing population (Ha 2004a).

In 2000, nearly one quarter (23. 1%) of all households in Seoul lived in accommodations that did not meet minimum standards (such as floor space and basic facilities) set by the government. Many families lived in single illegal or sub-standard rooms, or in houses built of vinyl and thin wooden boards, most of which lacked even basic facilities. The minimum standard for housing set by the Korean government was based on the following factors (Ha 2004a):

The price of houses and rent continued to increase due to economic growth and shortage of houses. In Seoul Metropolitan area, housing price to income ratio (PIR) was 6. 3 in 1997, higher than the global average 5. 2. Similarly, rent to income ratio (RIR) was 27% compared to global average 18% (Ha 2004a). According to data of the Financial Supervisory Service (FSS) as of September 2006, the average house price to income ratio (PIR) among wage-earning households nationwide stood at 4. 9, close to the 3-5 optimum level. However, the PIR was 10. 1 for apartments in Seoul and 12. 9 for apartments in Seoul’s Gangnam district!

The PIR in Seoul was much higher than major international cities, such as New York at 7. 9, London at 6. 9 (“Research Body; Ministry disagrees over Korea’s housing bubble”). In recent years the housing sector investment accounted for 4. 5% of GDP in South Korea (Lee and Ahn). Apartment construction in Korea began in the early 1970s, and became the dominant housing development pattern in the country. Apartments accounted for 81 percent of all new dwellings constructed in Korea between 1995 and 2000. From 1990 to 2002, a total of 12, 521 apartment buildings with 2,205,116 flats of different size had been constructed in Seoul (Hwang and John).

Apartment business accelerated in 1999 due to the high demand and scarcity of land. Almost 60% of Seoul citizens don’t own the houses, but live in rental houses. The owner occupancy in the Korea has declined from 79% to 54. 2% from 1960- 2000. This decline was mainly limited to urban areas where it fell from 62% to 46. 4% from 1960 to 2000. ‘Chonse’ is a rental system in which the tenant pays a lump sum to the landlord and gets the money back when he/she leaves. The earned interest on the Chonse is the rent paid for, and the Chonse contract is legally set for two years (Ha 2004b).

People are forced to live in “mud hut villages” or in ‘shanty towns’ due to extreme poverty and very low living cost. Moreover, most of these types of settlements grew near industrial areas, because of the employment opportunities in the industries. After 1970, typical residential cities for poor people became known as the “moon” or “hill” neighborhoods. In the 1980’s, “moon” neighborhoods had become the prime target of redevelopment and the residents had to move further outwards of the city and form new types of squatter neighborhoods.

These houses are constructed with thin wood board layers and vinyl covering on the outside. Most Binilhaus occupants are poor tenants. Binilhaus squatters simply settle in vacant hillside areas or public open spaces without any rights of land ownership and/or building permits.

These are various kinds of basement or attic residences in low-income housing areas. Most of the Beoljip are located near the industrial areas with low-income laborers as residents.

These are one type of rental accommodations with a daily pay system for the lowest income groups and the homeless. Very poor people live in these types of accommodations.

Before the 1960s there was no redevelopment policy on the emerging slums. During the period from 1961 to 1972, a new policy of removal and maintenance for slum and resettlement was adopted, resulting in new apartment buildings and resettled villages (Ha 2004b). From 1962 to 1970, about 40,000 low-income households had been relocated to 20 new areas where there were no planned residential areas such as hillside and quasi-agricultural areas, where living conditions were not good (Ha, Shin and Seong). The entire removal approach was attempted from 1974 to 1982.

In the late 1980s, the government formulated a five-year housing supply plan with the objective of constructing 2 million dwellings from 1988 to 1992; this program was more or less successful (Ha 2004a). Korean housing policies aimed at providing subsidized apartments to middle class consumers. Public sector organizations like Korean Land Corporation and the Korea National Housing Corporation developed and provided inexpensive land to homebuilders, who in turn sold apartments at regulated prices (Hwang and John). The housing regeneration project included three components: Redevelopment, Improvement, and Rebuilding (Ha 2004b).

This project is named the ‘Joint Redevelopment Project’ (JRP), where the association of landlords and the housing developer(s) agree on certain terms and conditions and construct new apartments according to government regulations. In the end the home owner gets a flat to live in, and the developer makes profit by selling excess flats. The buildings are 15- 25 stories and on average 118 m2 (Lee, Chung and Kim 55-80). Once the buildings and related facilities are built by the developer, it is then sold to landlords in lots and houses according to their original portion.

Page 6 Although this program was meant to provide residence to poor people it failed to do so because there were many households who could not afford to pay for the development work, so they sold their share and moved outwards from the city and formed new slums. This project brought profit for the developers and middle class people however, who could afford the work. Moreover, serious human rights violations occurred due to the eviction of unwilling owners or tenants; again, tenants had little rights under this program.

The second type of housing regeneration scheme is the ‘Improvement of Residential Environment’, created in 1989, which was designated on the area where the buildings were very old and improvement needed. Unlike JRP, the aim of this program was to enhance shelter for squatters without displacing them. It required a local government to provide much of the infrastructure for new or rehabilitated residences.

Under the program’s individual improvement scheme, residents rehabilitated their housing, such as the self-help housing throughout the 1970s, but the government relaxed the building codes and provided affordable loans. For this program, the resident upgrading alternative supposedly placed residents in charge, but they may lack the skills, technology, and experience necessary to manage home improvement.

The rebuilding took place under the provision of revised regulations of ‘Act on the Promotion of Housing Construction’ in 1993.

Buildings more than 20 years old could be reconstructed under this act, but almost 76. 2% rebuilding took place abusing the exceptional clauses of law. The land owners and developers found it profitable to rebuild the houses because of the rising trends of flats, moreover by rebuilding they could increase the number of flats. Lee and Ahn (2007) have identified five policies executed by the government, they are:

The policies had the following goals (1) mass supply and construction of hosing units, (2) stability of house price or the control of real estate speculation, (3) living stability for the low income bracket and (4) vitalization of housing. In their recent research Lee and Ahn concluded that the government housing policies were effective. The residential environment improvement projects have been initiated by communities. The government has drawn up plans to provide support for this project by providing 1 million public housing units by 2013, for low-income communities.

The focus of residential environment improvement projects is to improve illegal and deteriorated housing and to maintain public facilities under the Act on Temporary Measures for the Improvement of Dwelling and Other Living Conditions for Low-income Urban Residents, enacted in 1999. According to the Act, local government should improve the urban infrastructure in the areas designated for residential environment improvement projects. Finally, the government enacted the Housing Law in 2003 which states that government should establish minimum housing standard and priority should be given to those who are living below those standards (Ha 2004b).

The housing sector in Seoul could not cope with the rapid industrialization and rural urban migration. To face this problem the government has adopted many policies, some of which did not work as effectively as they were supposed to do, such as JRP which has gotten criticized for favoring the wealthy rather than the poor. 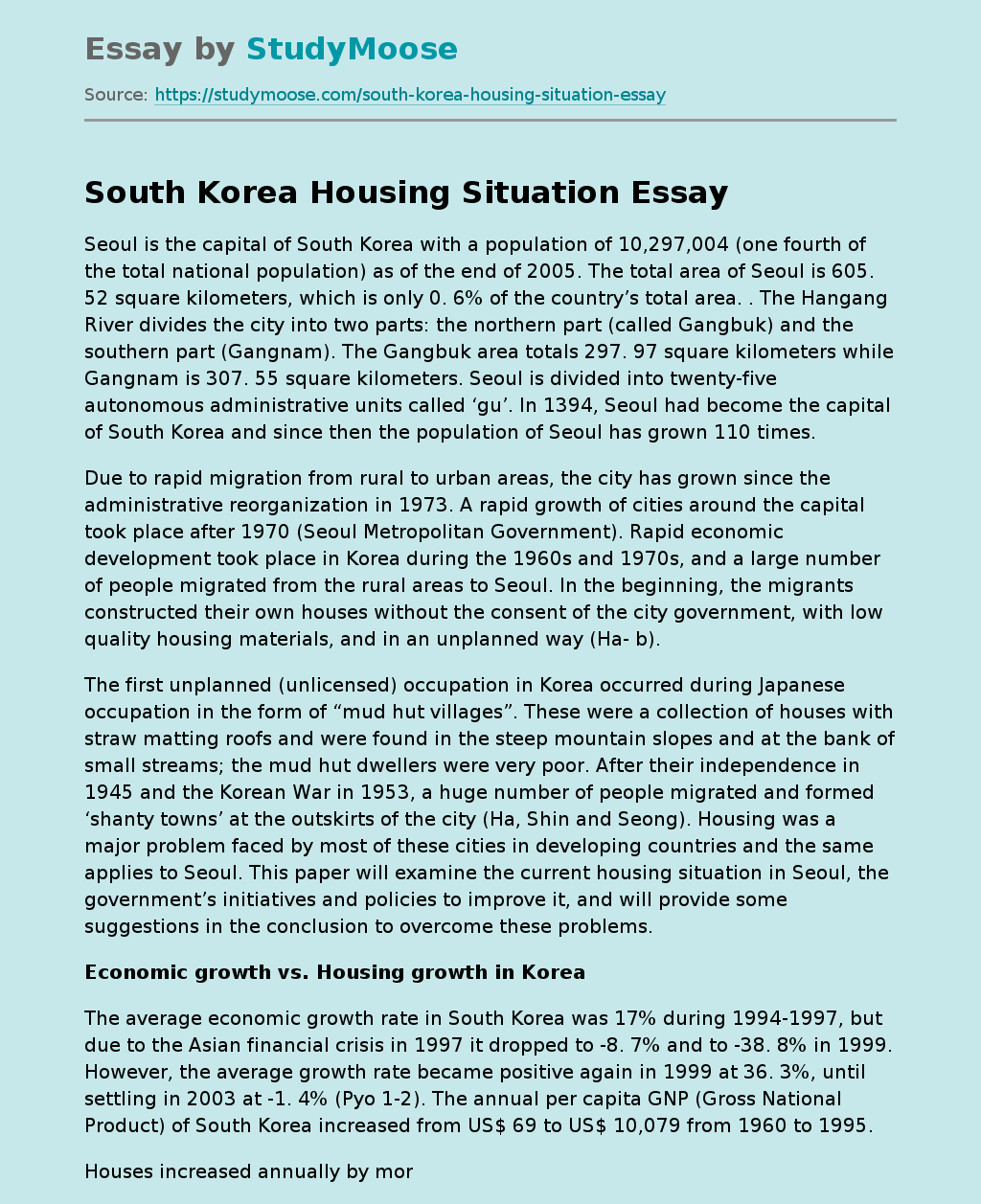