The Separation of Powers

Davenport S. & Parker D.’s statement (as above) explores the concept of the ‘separation of powers’ doctrine and how this is embedded within the ‘Commonwealth Constitution’. It also states that Australia is a ‘constitutional democracy’. To address the meaning of this statement it is important to separate the statement into individual questions. What is a constitutional democracy? What is the doctrine of separation of powers? And lastly, what are the three parts that make up the separation of powers doctrine, and how does this operate in Australia? The following essay will provide a brief overview of these questions.

Don't use plagiarized sources. Get your custom essay on
“ The Separation of Powers ”
Get custom paper
NEW! smart matching with writer

The first part of Davenport S. & Parker D.’s quote, relative to the ‘constitutional democracy’ term refers to the government systems in place within Australia, as a nation and how this functions in a practical sense. As described by Way A.L. a constitutional democracy is made up of two parts. Firstly, the power a government has within the constraints of a country’s constitution, and secondly the control of the general population in electing representatives, and those representatives accountabilities.

Simply put, a constitutional democracy describes a countries framework that is somewhat controlled by the populous via the election of representatives (governments), and at the appointment of these representatives, the limitations of power they have within the constitution. Furthermore the ‘constitution’ terms describes a written set of principles that provide the fundamental law of a country and which were implemented in Australia (New South Wales) in 1900 (Pembroke, M et al, 2006, pg.

96). The Commonwealth of Australia Constitution Act 1900 (referred to as the Constitution, hereafter) infers differentiated powers both exclusive and concurrent, and at both a state and federal level.

The second part of this quote refers to the ‘separation of powers at both federal and state or territory levels’. The term ‘separation of powers’ signifies a fair government approach, whereby power is distributed across three levels – Legislature (Parliament), the Executive (Governor General) and the Judicature (High Court). The purpose behind the implementation of the doctrine was to “prevent absolutism or corruption arising from the opportunities that unchecked power offers” (Spindler, G 2000). The doctrine of separation of powers was originally modeled on the Westminster system to achieve this responsible government approach, but also embodies many American concepts (Harvard Law Review, 1958).

The aforementioned quote also states that the “separation of powers is enshrined in the Commonwealth Constitution”. This simply identifies the origin of the doctrine and how it is embedded within the Constitution making it absolute. Each arm of government within the separation of powers model has differing levels of power and responsibilities (Pembroke, M et al, 2006, pg.98). These three sections will now be discussed, as they currently function within Australia.

The Legislature (also referred to as Parliament) comprises the upper house (the Senate) and the lower house (the House of Representatives). Their function is “to make laws for the peace, order, and good government of the Commonwealth” (Australian Government ComLaw, 2003). Members of the Senate and the House of Representatives are elected by the Australian population. Both houses have equal power however the Senate is subject to some limitations regarding amendments to particular financial legislation (Australian Government ComLaw, 2003). It can be said that the Legislature arm of the government is the starting point in the process of law making. At this level the need for new laws/acts is identified and bills are drafted (Commonwealth of Australia, 2012).The process of passing a bill is carried out in three stages. Firstly it passes through the house of origin, either the upper or lower house. Once passed through this house it is then processed by the other house in a similar way. Subsequent to the bill passing through both houses, it is then submitted to Governor General (Executive) for Royal Assent. On receiving Royal Assent, the bill then becomes law. Evidently there is a strong relationship between the Legislature and Executive within the phases of ‘making laws’ (Graw, S 2012).

The appointment process in this case is somewhat contradictory to the essence of the doctrine of separation of powers, as both the Cabinet and the Governor General are selected by the government of the day (Patapan, H 1999). Through the judicial review process, however, the misuse of power in the Executive arm is unlikely to occur. The Legislature’s delegation of law-making functions to the Executive, primarily for the purpose of efficiency in passing bills, is another example of the links/relationships between the two arms of government.

Dissimilar to Executive and Legislature arms of government, which are somewhat interlinked, Judicature is an independent body and acts independently from the government. The Judicature (High Court) or Judiciary as it is commonly called, is made up of Chief Justices and Justices who are appointed by the Governor General. The role of the Judiciary is to interpret, apply and enforce law, and as Pemroke, M. et al states, it functions as “the guardian of the Constitution”. The Judiciary function of interpreting law is based on the understanding of the law and/or Parliaments intent of the law, at the time of the laws implementation. Simply said, Chief Justices/Justices exercise independent decision making by encompassing the reasons for the stated law and the situations in which the law was created. This in turn enables them to interpret laws the way they were intended at the time of implementation.

To conclude this essay, it is important to note that each arm of the government – Executive, Legislature and Judicature, operate across both State and federal levels. The power exercised across the State and Federal levels is disparate, and is dependent upon Constitutional provisions. In Australia today there is no clear separation of power between the Executive and the Legislature due to the relationship created by delegate functions (Marquet, L 1990). This can be illustrated by the comparatively independent functions of the Judicature.

The Separation of Powers. (2016, Mar 21). Retrieved from https://studymoose.com/the-separation-of-powers-essay 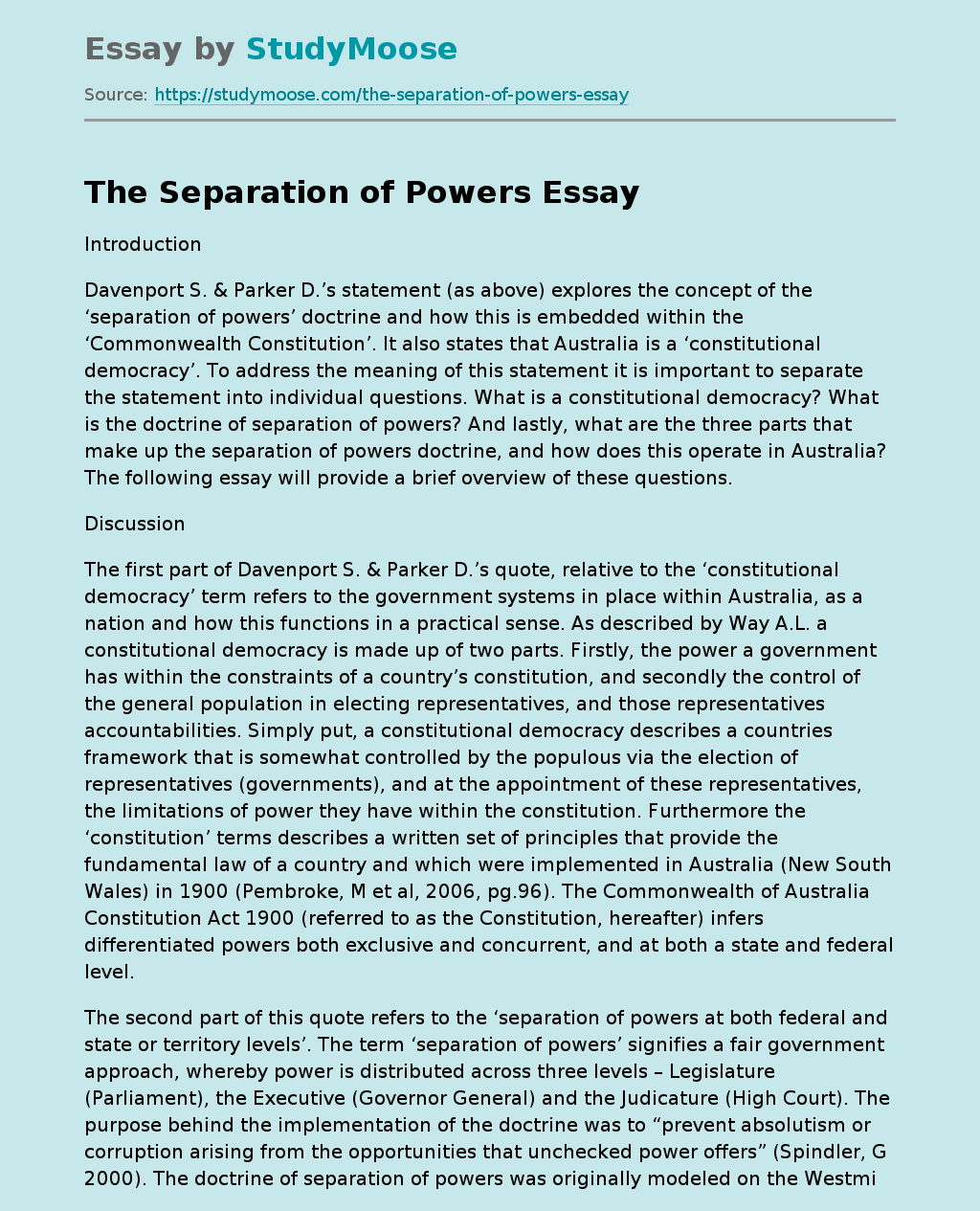