The Second Chance Act and Recidivism in Missouri

Don't use plagiarized sources. Get your custom essay on
“ The Second Chance Act and Recidivism in Missouri ”
Get custom paper
NEW! smart matching with writer

In an effort to combat the overcrowding of prisons in the United States, which over the last four decades has drastically worsened, mass incarcerations, and the ever ballooning costs of corrections, the Second Chance Act (SCA) was signed into law in the United States in 2008. This legislation was not only designed to fight mass incarceration, but, according to the National Reentry Resource Center (2019), also to reduce recidivism, and improve public safety by providing states and local communities with assistance for implementing programs that would focus on substance abuse treatment, mental health treatment, employment training and certification for offenders that would be reentering their communities (para.

According to the Missouri Department of Corrections (2019), in 2018, the state of Missouri had the 8th highest incarceration rate in the United States, the fastest-growing female prison population in the United States, an increasingly violent crime rate with a decrease in violent crime arrests, a serious lack of behavioral health resources, and a high rate of prison admissions, approximately half of which were for technical violations for offenders on probation or parole(para.

3). In response to this, the state of Missouri passed the Justice Reinvestment Act (House Bill 1355), which was “aimed to expand community-based treatment for people in the criminal justice system who have substance abuse addictions and mental illnesses, increase support for victims and provide resources to local law enforcement to help reduce violent crime, among other measures” (CSG Center Staff, 2019). With a push to deinstitutionalize the prisons in the United States, the Justice Reinvestment Initiative and the Second Chance Act provide a good opportunity to battle mass incarceration and reduce recidivism in the state of Missouri without sacrificing public safety.

Through a variety of different and unique programs that MRP has implemented, there have been some successes and some promising opportunities. Some examples of successful programs listed in the Missouri Reentry Process Report to the Governor in 2016 are listed below. Through a partnership with the Fathers’ Support Center in St. Louis, and a grant from the Department of Labor, the Missouri Department of Corrections identified offenders who were considered “high risk-high need”. These were offenders who needed assistance with training and certification, specifically in the industry and manufacturing fields. This program was designed to assist these offenders in obtaining full-time employment upon their reentry in an effort to reduce recidivism. “67% of those offenders who secured industry-recognized credentials through the program have been employed with a 5% recidivism rate” (pg. 3).

Another example of a successful program is the Second Chance Risk Reduction Center. The Second Chance Risk Reduction Center is contracted through the Department of Corrections and the Kansas City Crime Commission to assist offenders who are reentering into the Kansas City area. The Missouri Reentry Process Report to the Governor in 2016 shows that since July of 2013, 834 offenders have received assistance from the Second Chance Risk Reduction Center, with 547 of those offenders obtaining full or part-time employment. This program also boasts a 6% recidivism rate of those offenders, with only 48 of them being returned to custody or absconding (pg. 10). Through the assistance of experienced case managers and individualized Evidence-Based Practice services, the offenders were provided with services regarding employment, housing, and personalized goal planning. The program offers many more services and resources, including mental health services, substance abuse treatment, family reconciliation matters, among others.

A third example of successful programs offered by the Missouri Reentry Process is through faith-based organizations. In particular, Beauty For Ashes Reentry, which offers a 12 month (or longer) program which focuses on life skills, spiritual disciplines, and intensive case management for women who are preparing to reenter the community. Beauty For Ashes Reentry has proven to be successful in reducing recidivism and over the last two years has carried a recidivism rate of only 11.5% (pg. 12).

Last, one of the more unique programs that have been successful and continue to show promise is Missouri Puppies for Parole. This program is not only unique in the sense that it involves the training of dogs, but this program also offers a community service in placing “unadoptable” dogs in homes, and it does so with absolutely no cost to the taxpayers. Since the inception of this program, according to the Missouri Reentry Process Report to the Governor in 2016, more than 4,313 dogs have been adopted. Additionally, the offenders who train the dogs can earn a certificate of animal handling from the U.S. Department of Labor that is recognized in all 50 states (pg. 2).

With these, and so many other programs being offered, the state of Missouri seems to have a good bead on assisting offenders who are reentering the community and appears poised to take aim at mass incarceration through making the biggest impact on reducing the recidivism rate.

Large numbers of offenders are being released into the community due to the overcrowding of prisons and there is a fear that they may be released without the proper resources and programs to help them succeed, therefore causing them to commit new crimes and posing a danger to the public. Some studies show that the Second Chance Act has had some success in reducing the recidivism rate since its implementation.

The results from this study confirm that the programs put in place by the Second Chance Act have a strong possibility of reducing recidivism throughout the population of offenders who are reentering the community, but the lack of impact on the recidivism rates in Alabama shows that there are still opportunities for improving the programs available to the offenders. This further shows that the state of Missouri has a strong likelihood of success in reducing recidivism and improving public safety with the implementation of these programs, as long as there is a focus on continuing to improve the programs.

With the implementation of the Second Chance Act and the Justice Reinvestment Initiative, and the push for them to successfully lower recidivism rates and improve public safety, there are some impacts on correctional agencies that need to be considered.

First, and probably the biggest impact, will be with funding. The development and implementation of so many programs, even with some federal funding, will push costs and create budgetary problems. Each program will demand funding in order to hire or contract quality, qualified, and experienced employees. The lack of funding can cause a lack of programs altogether in some of the lower-income areas, which would have a negative impact on the recidivism rates in minority communities.

Second, the large increase in offenders leaving prisons and entering the community, all while being involved in post-release programs, is going to create a needless burden on probation and parole officers. These officers need to be able to work with and monitor each individual offender’s progress to ensure they are in fact utilizing the programs being offered. This increase in caseloads hinders these officer’s ability to provide quality service to each individual offender and could negatively impact the success of the programs and the offenders.

Third, without the proper resources out in the communities to assist the offenders with their reentry, they will not have the tools needed to succeed in establishing themselves in the community and staying out of prison. This is especially true for substance abuse and mental health treatment. This too would have adverse effects, as it would not only end in the failure of many offenders, it would also put public safety at risk. Releasing offenders back into their communities with a lack of resources would surely allow for a high rate of recidivism.

In regards to my personal views and opinions on the issues, I have some concerns with the number of offenders being released into communities. With more and more offenders being released into the communities, I feel there is a greater risk of failure. Failure of the programs to be able to handle overwhelming caseloads. Failure of the offenders to succeed because of a lack of readily available quality resources. And unfortunately, with these types of failures, there is often a rise in violent crime, which puts the communities at risk and pushes law enforcement to act. From my own personal experiences, I have seen a crime spike in certain areas after the release of some offenders from prison. It is not known to me if these offenders participate in any of the programs available to them, but it is clear to me that they are not being monitored or being held accountable.

If I was to formulate a plan to combat these impacts the release of large numbers of offenders into communities would have, I would take a two-pronged approach to combat recidivism and attempt to lessen the impact it would cause law enforcement and the communities. First, I would initiate pre-release programs that focus on education, training, certification, and the development of job skills. I would seek out companies to send representatives to the prison host job fairs to provide the offenders with the best opportunity possible to obtain employment upon their release. In addition to job skills, there would be other programs based on the needs of the individual offenders, whether it would be a treatment for mental health, behavioral health, substance abuse, among other issues. I would make these programs incentive-based so that genuine efforts are rewarded to encourage good honest participation. Part two would be a focus on post-release programs that continue to provide the offenders with similar resources as the pre-release programs, but out in their communities. Beyond just the programs, I would like to create a “one-stop-shop” sort of resource center that would provide a variety of resources to assist ex-offenders with their reentry. This resource center would include assistance with documents and would be able to provide state-issued identification, therapists, counselors, substance abuse treatment, mental health treatment, a pharmacy, and many other resources. The idea behind this resource center would be to make their transition as easy and stress-free as possible. Many times offenders can get overwhelmed with all they need to do upon being released, especially if they have served a sentence for many years. The resource center would be the only place they would need to go for assistance with anything they might need during their reintegration.

In conclusion, the state of Missouri has already had some successes in providing effective pre-release and post-release programs to offenders that reduce the risk of recidivism. With the proper funding, and continued efforts to provide and improve programs, Missouri could finally start to bring down mass incarceration and the overcrowding of prisons without sacrificing public safety and providing ex-offenders with a genuine opportunity to succeed. After all, President George W. Bush did say, “America is the land of the second chance, and when the gates of the prison open, the path ahead should lead to a better life.”

The Second Chance Act and Recidivism in Missouri. (2020, Oct 14). Retrieved from https://studymoose.com/the-second-chance-act-and-recidivism-in-missouri-essay 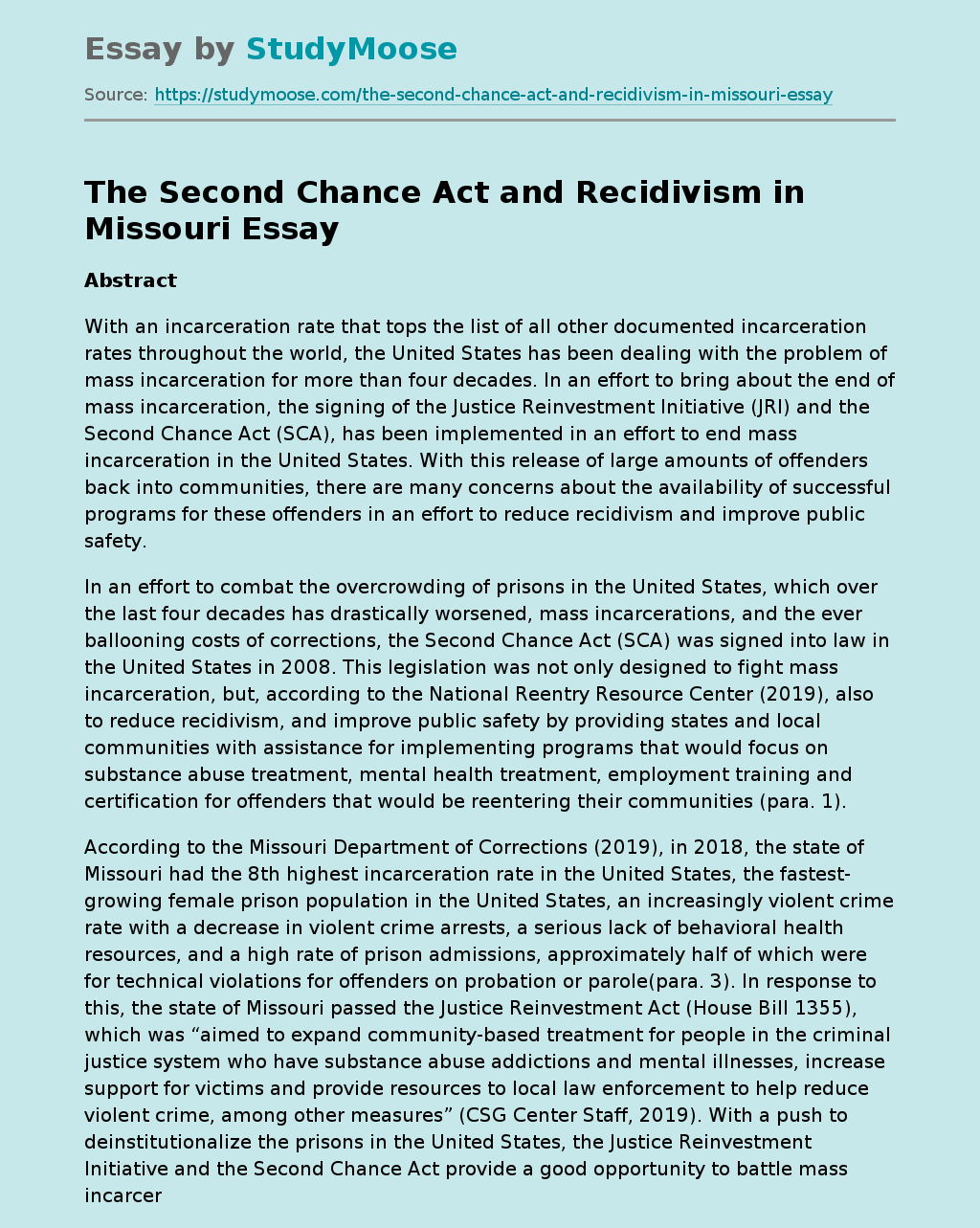