Pulp Fiction is an American crime film written and directed by Quentin Tarantino that connects the intersecting storylines of gangsters, criminals, and disreputable individuals in Los Angeles. It follows the story of two hit men, Vincent Vega and Jules Winnfield, who are on a mission to reacquire a suitcase that belongs to their mobster boss, Marsellus Wallace. In another intersecting storyline, Butch Coolidge, an aging boxer, is paid by Marsellus Wallace to throw a fight, but he instead crosses Marsellus Wallace by winning the fight and then has to flee from the consequences.

Don't use plagiarized sources. Get your custom essay on
“ A Literary Analysis Of Pulp Fiction Film Studies ”
Get custom paper
NEW! smart matching with writer

The film intensely focuses on conversations between characters that reveal both a dark comedy style of humor and their perspectives on life. The film’s appropriate title is a reference to the pulp magazines and crime books popular during the twentieth century, known for their dialogue and violent nature. The director’s unique style of remarkable dialogue, extensive use of violence, nonlinear chronology, and powerful, relatable character creation contribute to the central theme of how chance governs the plot and contributes to the formation of ethical views.

The movie focuses on how accidents dominate and direct the movie and how these accidents constitute the disjointed nature of the plot. Tarantino’s views of ethics can be related to those of French philosopher Emmaneul Levinas who describes how ethics are only formed by chance and accident (Bergo). This philosophy is exemplified when an unknown gunman unbelievably misfires at Jules and Vincent causing Jules to reassess his life and form new ethics.

As a result of this odd chance, Jules gives up his job as a hit man while Vincent does not ultimately leading to Vincent’s death and Jules’s life being spared. This view is also demonstrated in the chance meeting of Marsellus Wallace and Butch on the street and the eventual unfortunate meeting between Marsellus Wallace, Butch, and the rapist brothers, Zed and Maynard. Butch, who has not been involved in the immoral business of Marsellus Wallace before this chance event, is forced to take the immoral action of attempting to kill Marsellus Wallace. As a result of the unplanned incident of dealing with Zed and Maynard, Butch rethinks killing Marsellus Wallace and instead saves him which results in Marsellus Wallace rethinking his views on Butch who Wallace eventually spares. Another example of an influential accident is when a pop-tart springs from a toaster causing Butch to pull the trigger on a gun. This shows how this random occurrence forced Butch to do something he might have not done and how this influences his decisions throughout the movie. The story is told through accident and misadventure and the disparate nature of the plot reflects this method of storytelling. The various parts that are eventually tied together emphasize the significance of the unexpected events and interruptions in the movie.

Tarantino uses excessive violence and focuses on that bloodshed in the movie to reflect the underlying topics of ethics and desire. Hunter describes how the violence in the movie is distanced from ethical concern and instead is used to offer insight into the questioning of ethical reason as it relates to desire (Hunter). The extreme violence in the film is an integral part to the aesthetic. Tarantino meant for the audience to laugh at the violent scenes such as Vincent’s accidental killing of Marvin. This scene does not further the plot of the movie and is also prolonged throughout the film. Because of this, many people find the scene inexcusable and yet Tarantino intends for the audience to laugh at how ridiculous the scene is carried out and at the characters reaction. Stone describes how the use of random unnecessary violence saturated with real life dialogue creates comical morbid scenes that appear comical (Stone). Stone further explains that this was Tarantino’s intention and that he knew many critics would complain but felt it necessary for the style of the movie (Stone). Tarantino deliberately violates the conventions of action-films and that contributes to the appeal of the movie. The typical style conventions of the time for action films were building tension and suspense. In the film, Tarantino recreates scenes of violence that are exaggerated, surreal, and often comical. He leads up to these violent scenes with dialogue and continues to lead away from the scene flawlessly through the same dialogue. Often scenes are unnecessary for furthering the plot and random in nature. Most directors will cut away from the violence, but Tarantino stays with the violence and often displays the characters in the aftermath of the violence.

Through the fantastic dialogue and character development, the audience is able to connect with the seemingly immoral characters in the film. An example of this connection is with the character of Vincent Vega, a paid killer addicted to drugs. Even though this character should be villainous and unlikeable, Tarantino gives him a laid back personality and a seemingly innocent soul. This innocence plays a central theme in the movie as it questions morality and desire and stops the film from being a “sado-masochistic perversity” but a creative film with humor and positive energy (Stone). The long discussions found in the movie and these discussions’ relations with popular culture: B-movies, TV shows, and other elements of mass media are emblematic of Tarantino’s style. Hunter describes the nature of dialogue in the movie as focusing on a specific linguistic model where all dialogue references are obscene, shocking, repulsive, frightening or uncomfortably amusing (Hunter). Just as repetition is a key element to pulp fiction, the movie repeats important dialogues and anecdotal scenes to emphasize their relations with the central themes of desire and ethics.

The interweaving of Tarantino’s three stories complicates the commonly used linear structure for movies and presents the film in an interesting way that allows chance to dictate the plot. An example of how this plot structure creates interesting results is with Vincent Vega who is killed in one scene in the movie only to reappear again in the finale. Stone explains that the entire film is playful and this rearrangement of the plot is simply another way Tarantino is able to extend this playfulness; Tarantino is altering convention for effect rather than rejecting or deconstructing it.

Pulp Fiction evaluates the characteristic style of the director, Quentin Tarantino, showing that he violates the normal conventions of an action movie in order to convey his extreme ideology in an appealing way. The use of random unnecessary violence saturated with real life dialogue creates comical morbid scenes that appear comical. The acting of the characters as well as the dialogue turns them from what should be unlikeable villains into likeable characters that audience members are able to connect with. These methods of directing allow Tarantino to establish his radical views on ethics and luck in an appealing film. 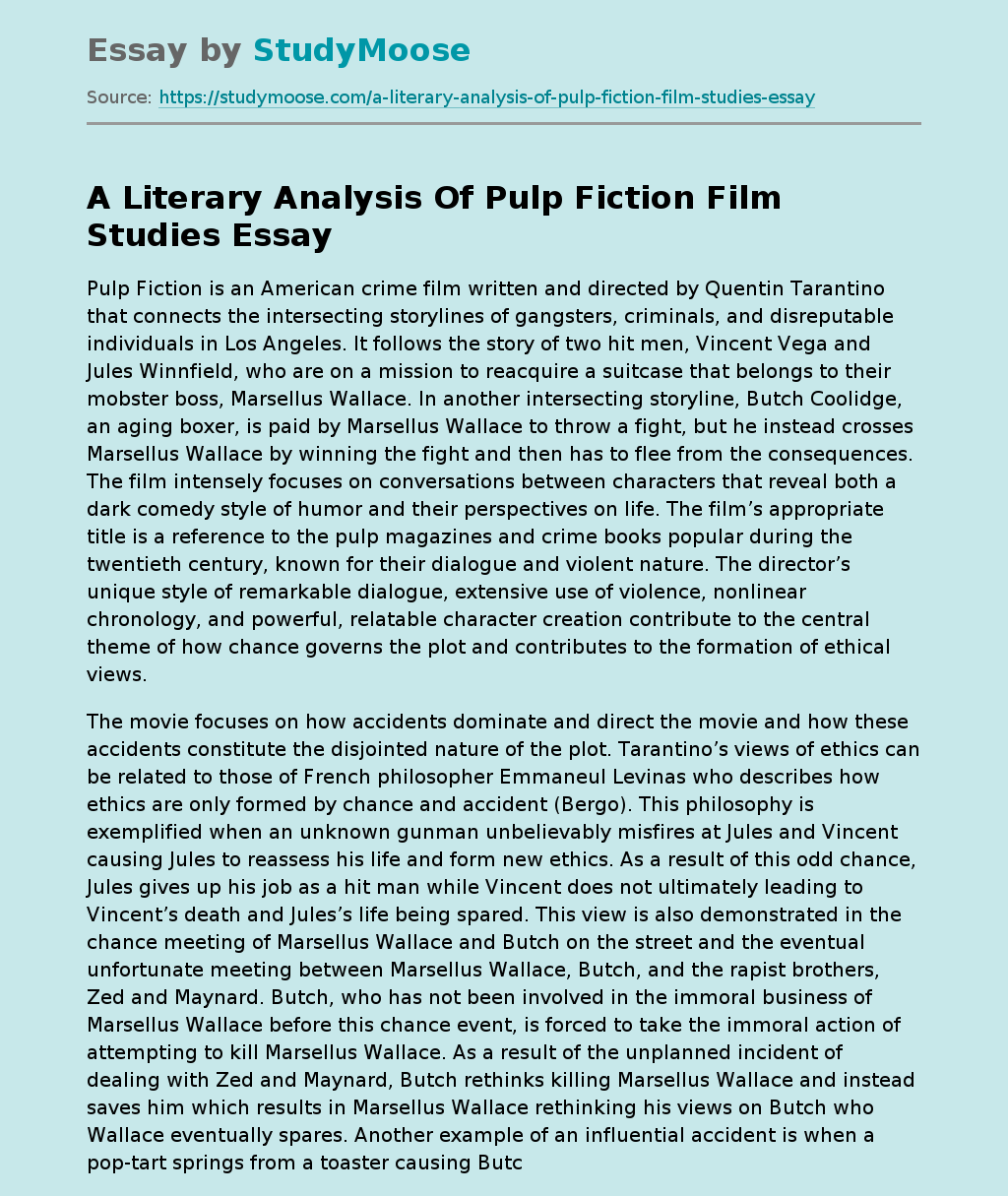