Throughout the movie Pulp Fiction, directed by Quentin Tarantino, there are many hidden references to religion and the Bible. The movie starts off, introducing our two main characters, Vincent Vega and Jules Winnfield, as two cheap hitmen in search of a package belonging to their boss, Marcellus Wallace. The package is retrieved, and they then began their job of returning it to their boss. Along the way, they ran into difficulties, such as Vega’s so-called “date” with his boss’ wife, Mia, during which she overdosed on heroin, and Vega was forced to take her to the drug dealer’s house to save her life, as well as the robbers in the restaurant, who try to take the suitcase from Winnfield, but were unsuccessful.

Don't use plagiarized sources. Get your custom essay on
“ Pulp Fiction ”
Get custom paper
NEW! smart matching with writer

The warning to all mankind

The movie wasted no time in introducing the first biblical reference when the two men try to retrieve the suitcase containing Wallace’s belongings. When Vega opened the suitcase, he used the combination “666” to open the suitcase, and when he opened it, the contents glowed a golden-orange color. This was obviously an introductory attempt to show the audience that the suitcase held Marcellus’ soul.

Perhaps Tarantino was trying to show that the people that stole the suitcase were the devils pawns, and these two hitmen were angels trying to retrieve stolen property.

After Vega and Winnfield had obtained their “treasure,” Winnfield quoted the Bible, specifically Ezekiel 25:17, the passage about destroying the evil members of the society that try to harm others for no reason. Part of that passage was “..and you will know my name is the Lord, when I lay my vengeance upon thee.” This quote shows that Winnfield sees what he is doing as heroic, or maybe angelic, and by carrying out his duties, he is following the word of the Lord. As Winnfield shot the boy, Brett, an orange-golden glow enveloped the screen, representing Brett’s soul leaving his body. This whole part of the movie is to warn the evil-doers of the world to cease their wrongdoings, because there are people out there who will stop them.

The next main scene of the movie took place in a bar, where Marcellus Wallace sat, conversing with Butch, a boxer, whose career, Wallace said, is near an end. He convinced Butch to throw a fight, for a cash reward. As the camera pans around, we see that Wallace had a bandage on the back of his neck. The Bible states when the Devil takes your soul, he takes it out of the back of your neck. This is where Tarantino really hinted to us about what was taking place, and this further suggests that Wallace’s soul was in the suitcase. This scene also suggests that Wallace was possibly trying to play God by trying to make Butch throw the fight. These signs show us that if we try to play God, we will be punished severely.

Now we saw Vincent Vega visiting a drug dealer who looked astonishingly like classic descriptions of Jesus Christ. This uncanny resemblance can only be here to show us one thing: that He is the creator of all, and can be the destroyer of all as well, just as drugs can destroy all. This is a very hidden, but well understood sign, for those of us who take the time to notice it. As it turns out, later in the film, we see the drugs that Vega bought from the dealer cause Mia to OD and she narrowly escaped death with an adrenaline shot to the heart. The adrenaline shot was administered by Vega, however it was at the dealer’s house, once again showing us that He has supreme control over us, for without the dealer, Mia would never have been in this situation, nor would she have made it out if it alive.

Jumping back a bit, at the beginning of the date between Vincent and Mia, as Vincent entered Mia’s house, he was greeted by a voice over the intercom. As he looked up, it was as he was looking toward the heavens for guidance from God. The voice over the intercom was like God speaking down to his angel, giving him directions. This image is further strengthened when we see Mia looking down on Vega through a system of security cameras. This, yet again, gives us the image that since Mia is Marcellus’ wife, she was also in a way trying to play God by watching her “angel” and telling him what to do without him actually seeing her.

“Son of a Preacher Man”

Throughout the whole scene, “Son of a Preacher Man” was playing in the background. This was seen as a strengthening sign, to demonstrate to us even further the likenesses of the Wallaces to God and their attempt to control others. At this point, the movie jumped ahead to another job that Vincent Vega must perform after he has completed his task of returning Wallace’s soul to him. Vega was hiding out in Butch’s house. As it turned out, he didn’t throw the fight he was paid to, and in fact beat the other fighter so badly that he killed him. As Butch returned to his home to pick up a watch left behind by his girlfriend in the frenzied exit, he encountered Vega who was hiding out waiting for him, and promptly shot him repeatedly, killing him.

As the movie progressed, we saw Vega falling into the traps of society, such as drugs, alcohol, blasphemy, and doubting of miracles. At the very end of the movie, which is actually the middle of the story, Vega was ridiculing Jules because he planned on retiring after witnessing what he believes to be a miracle, or divine intervention, when in the apartment at the beginning of the movie, a boy appeared out of the bathroom, firing a gun five times directly at the two hitmen, but missing with all five shots. This shows us further that Vega is straying from loyalty and belief in God and his ways, and this is why he is shot and killed in the boxer’s house. This is a strong and effective way to tell us that non-believers will be eliminated, and that God is all powerful. Again, jumping back a bit, the angels (Jules and Vincent) came across a serious dilemma when Vega accidently shot a boy in a car in broad daylight.

The man called The Wolf

The two end up calling Wallace, who in this sense was God, to help them. He sent to their rescue the man they call The Wolf. He was the lifesaver to the two partially fallen angels. They committed a sin that was not a retribution for anything done to them, and for this they were stuck between a rock and a hard place, and needed the help of their “God” to save them. This is a cleverly hidden sign that shows us that He can forgive in the “Do unto others…” sense, but if there is something done which is not in response to something done previously, there is a price to pay. At the end of the movie, which is actually the same scene as the very beginning of the movie, both of which are the middle of the story, in the restaurant in which Jules and Vincent are in is being robbed, the robber tried to get the suitcase from Jules.

A shuffle ensued, and Jules ended up with the upper hand. He did, however open the suitcase for the robber, and the robber thought it was the most beautiful thing he had ever seen, which the soul is said to be. Jules did not kill the robber; instead he let him go, with the money from the restaurant. He did, however, recite Ezekiel 25:17 to the robber, but this time he did not shoot his listener. This time he contemplated the meaning of the passage as he was saying it. He develoed several intriguing explanations of the passage, but his last is his best. He says that the robber is the weak in society, and that he, Jules, is the tyranny, but he is trying to be the shepherd.

This interpretation of the passage suggests that Jules realizes that, even though he is doing the work of God, sometimes what he does is not right, and he is trying to be the one that always does the right thing: the shepherd. This is another reason why Jules is not killed off. He realized that he cannot play God, and therefore he is forgiven. Vincent, however, never fully realized this, and he is punished at the end of the story by being killed by Butch. Although cleverly hidden, the signs of biblical inference and the power of God are extremely prevalent in the film.

Elements of the plot such as the realization of wrongdoing by Jules, the general feeling that the Wallaces are trying to be all knowing and all powerful, the drug dealer being the downfall as well as the savior for Mia, and the way that Jules and Vincent try to control others lives and are punished for it all show us something. These signs show us that we must do as we think we should, and not try to control anyone but yourself, because if you are busy trying to control others, you may not be tending to yourself, leaving yourself wide open to manipulation by others like yourself. If we mind our own business and take care of ourselves, the world would go a lot smoother, and have many fewer conflicts. 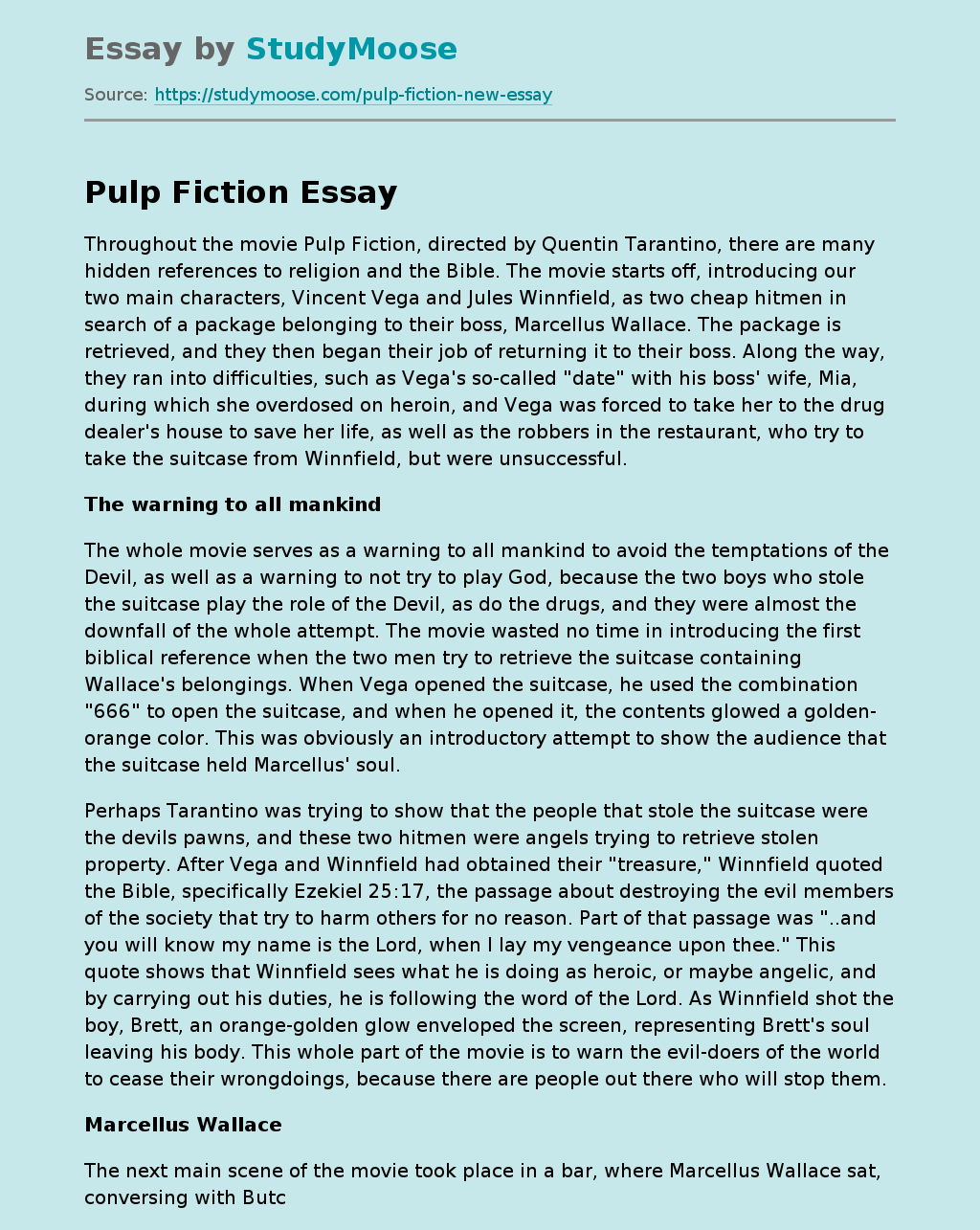