The Scarlet Letter and The Great Gatsby

Although set in vastly different cultures at different eras within American history, a common theme can be established when comparing The Great Gatsby by F. Scott Fitzgerald with The Scarlet Letter by Nathaniel Hawthorne. Both novels, for example, examine the dichotomy between reality and appearance as well as the conflict between individual and social values. In The Scarlet Letter, Hester Prynne and Arthur Dimmesdale love each other. This love holds great personal value for them.

Don't use plagiarized sources.
Get Your Custom Essay on The Scarlet Letter and The Great Gatsby Just from $13,9/Page

However, because their relationship is adulterous, it cannot be tolerated by the Puritan society within which they live. Individual values and desires are submerged by the force of the collective, where no concession is made for individual circumstances or the depth of feeling. This creates considerable anguish for both main characters.

In The Great Gatsby, a similar submerging process occurs. Jay Gatsby and Daisy Buchanan are the main focus points of the novel. Like Dimmesdale, Gatsby desires Daisy above all else.

Although adulterous relationships are far more tolerable in this society, thee social values of the time, however, plays no lesser role in submerging the individual. Gatsby, for example, pursues the social status brought about by material wealth in order to gain his prize in the form of Daisy. In this pursuit, however, what is truly important to both him and Daisy as individuals are submerged to such an extent that neither finds fulfilment. In contrast to Hester and Arthur, Gatsby’s and Daisy’s love is simply an extension of the psychological and spiritual emptiness created by the elusive ideal of the “American Dream.”

Their love is as superficial as the dream itself. Any true, deep feeling is well and truly submerged by the social values of the time. Hester and Arthur’s love, however, is true. Their society, however, attempts to submerge this love by condemning it in a very public way. In both novels, individuals suffer as a result of social values. Arthur and Hester are publicly condemned for their true love. Gatsby and Daisy are both approved and admired public figures. They suffer, however, as a result of being seduced by ultimately empty social values that regard material possession above all else.

Two American novels, The Scarlet Letter and The Great Gatsby are reflective of their authors’ concern for the excess of the historical period in which they are set, excess so puissant that it permeates the character of those who people that era, thus generating a veritable culture with values that have become corrupted. The Puritanical culture of Hawthorne’s narrative has become perverted in its excessive religiosity. Indeed, the opening chapters convey this excessive fervor for adherence to Puritan law as Chapter I opens with the descriptions of the austere Puritans standing outside the “ponderous iron-work” of the first prison-house built in America. Then, in Chapter II the sanctimonious and sadistic goodwives pass their own judgments upon Hester Prynne as one declares that the church members should have the “handling of such malfactresses as Hester Prynne” and another adds, The magistrates are God-fearing gentlemen, but merciful overmuch,—that is a truth…..

At the very least, they should have put the brand of a hot iron on Hester Prynne’s forehead. Madame Hester would have winced at that, I warrant me. After the excessive gesture of placing scarlet letter of ignominy upon Hester, the Puritan community marginalizes Hester on the edge of town and alienates her from others by not allowing her to interact with them. Personifying the corruption of values in this Puritanical society is the character of Roger Chillingworth, who in his self-righteous revenge claims the very soul of the man who has wronged him by entering into an adulterous relationship with his wife: “He will be mine.” In his judgment of Dimmesdale, then, Chillingworth dedicates himself to violating the secrets of Dimmesdale’s heart, an area that belongs only to God.

So perverse is he in his intentions that Chillingworth turns himself into “a fiend.” Similar in its corrupting excessiveness is the Jazz Age of Fitzgerald’s The Great Gatsby. But, in contrast to the Puritans of The Scarlet Letter, the excess of characters is non-religious and amoral; it is the excess of hedonism spurred by wealth and materialism. In their devotion to pleasure, Tom and Daisy Buchanan conduct marital affairs and kill a woman; in their devotion to the acquisition of wealth, the likes of Meyer Wolfscheim and Dan Cody engage in criminal activity, as does Jay Gatsby, who perversely perceives materialism as the path to the green light of reunion with his idealized memory of Daisy.

Thus, in devotion to excess, the personages of both novels effect their own demises as they do not consider the effects their actions will produce. For, the characters of Chillingworth and the self-deceiving Dimmesdale, much like Gatsby, who perceives himself as a demi-god ( “the son of God”) as he is convinced that he can repeat the past and that the end result justifies his hypocrisy, bring about their own ends.

Likewise, Nick Carraway finds himself contaminated by the amoral and lives of those with whom he has been associated; furthermore, the “morally blind” and excessive behavior of Daisy and Tom Buchanan leaves them responsible for Gatsby’s death as they are careless people….they smashed up things and creatures and then retreat… into their money or their vast carelessness or whatever…kept them together, and let other people clean up the mess they had made…. In the end of each novel, a main character seeks a moral center from excess: Nick in the Mid-West; Hester in the New England village.

One big similarity between the two novels is that both follow protagonists who seek to fulfill their desire for another: Gatsby pursues Daisy throughout the novel, while Hester’s consummation of her passion for Arthur (and its covert continuation throughout the novel) put all events in motion in The Scarlet Letter. In a broad way, we can understand both as novels of unfulfilled desire, both set in the context of very different Americas. In The Scarlett Letter, both sex with a minister (Arthur) and sex outside of marriage is forbidden.

Arthur and Hester transgress those boundaries secretly, but must spend the rest of the novel apart in order to hide their transgression. Similarly, Daisy and Gatsby’s relationship is forbidden by the social stigmas of the time: Daisy, as a wealthy member of the upper class, would not be allowed to marry Gatsby, a poor blue-collar worker. But like Hester and Arthur, they have a brief affair before the action of the novel, which is never resumed.

In sum, both The Scarlett Letter and The Great Gatsby chronicle the stories of star-crossed lovers who may never consummate their mutual passion due to societal constraints.

The Scarlet Letter and The Great Gatsby. (2016, Aug 25). Retrieved from https://studymoose.com/the-scarlet-letter-and-the-great-gatsby-essay 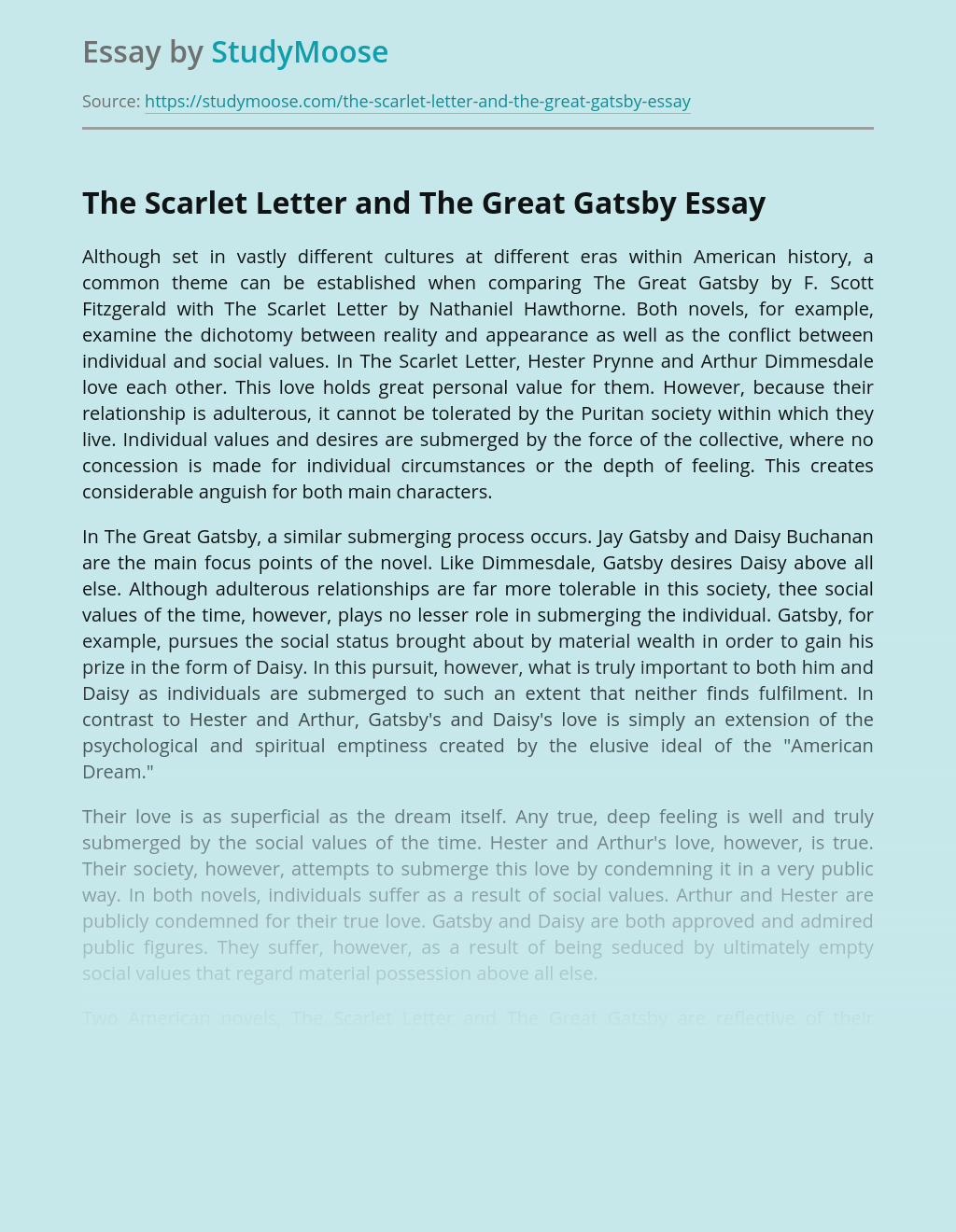 Leaders Aren't Born They Are Made

Rate this post “There are many well-educated and motivated people who lack the knowledge of how to lead others. So they don’t assume leadership positions, or if they do, they don’t do very well in them. They and others too, assume that these individuals just weren’t born to be leaders. That’s really a tragedy, because...

Rate this post Many people are unemployed in different countries. The economy currently is pondering on the financial crisis, while many companies are running out of business. Thus, the report is analyzing the unemployment in UK bring out the causes and consequences of unemployment. The report further analyzes impacts to the economy and ways that...

Get Essay
Invasion of Poland and The World War 2

Rate this post The Invasion of Poland, also known as the September Campaign or 1939 Defensive War (Polish: Kampania wrzesniowa or Wojna obronna 1939 roku) in Poland and the Poland Campaign (German: Polenfeldzug) in Germany, was an invasion of Poland by Germany, the Soviet Union, and a small Slovak contingent that marked the beginning of...

Rate this post The serous membrane in Chloe’s abdomen contains the peritoneum. The peritoneum is the largest serous membrane of the body which includes the greater omentum, the largest peritoneal fold, which drapes over the transverse colon and the coils of the small intestine, and contains a considerable amount of adipose tissue. Involuntary contraction of...

Rate this post Ambition is a strong desire to do or achieve a goal. The extent of such ambition is easily influenced by other inner factors, such as gullibility because it allows the mind to believe in things that will bring them closer to their ambitious goals. In William Shakespeare’s play, The Tragedy of Macbeth,...