?The Role and Value of Play in Education

All children and young people need to play. Children’s play is behavior which is freely chosen, self-motivated and personally directed, and the impulse to play is in all of us. Through play the child explores the world and its creative potential, discovering all the while, a flexible range of responses to the challenges, she or he encounters. By playing, the child learns and develops as an individual and as a member of the community – be it at home, the street and area they live in, their school or a holiday play scheme.

As such, play is a right, recognised in the United Nations Convention on the Rights of the Child – Article 31. Play is essential for children’s physical, emotional and psychological growth, as well as their intellectual, creative and educational development.

When children play they build up a sense of identity, self-respect, confidence and their own self-worth. Through playing with others, children build a resource of behavioural techniques to help them navigate complex social worlds including younger children not to feel intimidated by older children.

The contemporary environment in which many children grow up is not designed with them in mind, and at times and in some areas provides limited opportunities for safe and creative play. Increasing traffic due to continuous property development, parental fears of strangers and lack of open spaces all restrict children’s play outdoors, but by providing and protecting play-rich environments for children we can counteract these limitations.

Much has been written on the subject of play and there is visibility in legislation and guidance for professionals:

In June 2010 the coalition government set up a Childhood and families taskforce, Nick Clegg, Deputy prime minister said in his opening speech, “For too many British children, childhood has become a time of stress, anxiety and insecurity, when it should be a time of discovery, learning and adventure. My purpose in politics – and the job of this coalition government – is to change that, to live up to our responsibility and lay the foundations for better lives for our children.” At the launch of the revised EYFS, published March 2012, following the Tickell review, we were once again reminded that “play is essential for children’s development.”

When children play, they are actively engaged in activities they have freely chosen; that is, they are self-directed and motivated from within. “Best Play” starts with a definition of play and with a set of values and principles. Both the definition and the values and principles are well recognised within the play work profession, (though they can be expressed in slightly different ways, for instance they can be found in the National Occupational Standards for National Vocational Qualifications in Play work and in the New Charter for Children’s Play (Children’s Play Council 1998), though perhaps less so outside it. It then looks at evidence and arguments about the role of play in child development and the consequences of a lack of good play opportunities. “Play is freely chosen, personally directed, intrinsically motivated behavior that actively engages the child”. This definition draws closely on the work of Bob Hughes and Frank King.

Children choosing what they want to do, why and how they want to do it then when to stop and try something else is the simplistic breakdown of the definition. Free play has no external goals set by adults and has no adult imposed curriculum. Although adults usually provide the space and resources for free play and might be involved, the child takes the lead and the adults respond to cues from the child. When children can pursue play under their own impulse and initiative, they are able to:

However, there is a growing consensus about some of the possible implications of play deprivation, based on reasonable assumptions about the role of personal experience and self-directed activity in the development of a range of competences. Depending on the types of play opportunity that are lacking, children could be affected in the following ways:

Every child is different and will play in their way. As an adult and the manager of the After School Club (ASC) I need to recognise the impact that myself and co workers have on a child’s play opportunities. Throughout the session I take time to observe, consult, plan, and participate in play knowing the great potential for learning that play offers – developing skills and abilities, providing opportunities to co-operate, developing friendships, taking turns, resolving conflicts and solving problems, and developing knowledge and understanding of the world. While children will sometimes need support, it should be recognised that they will often benefit from opportunities to play without adult supervision. Therefore we, the play workers, must understand the impact we have, giving consideration to the differences of each child including behaviors. Bob Hughes (2006), a playworker and play theorist, has identified sixteen play types, including creative, dramatic, exploratory, fantasy, locomotor, mastery, object, role, rough and tumble, social, socio-dramatic, symbolic, deep (extremely risky) and recapitulative (ritual) play. Their very description indicates a relevance to the social, physical, intellectual, creative and emotional development.

Snapshots of play at ASC

Eddie and Eleanor are playing a new game – Mancala. Eleanor was pleased to discover the game in the cupboard and is teaching Eddie as she has the game at home, she told Eddie how she loves playing it with her Dad. Eleanor explains the rules and object of the game, they play repeatedly, both enjoying the competitiveness. George, Robert and Calum have built a play scene on the wooden piano using the play animals, a piece of camouflage material and wooden tree pieces. They have built dens for their animals at different levels and then use blocks and vehicles they have made from lego to destroy the animal’s dens. The tigers dens is last to be destroyed says Calum “they are the fiercest animals and will fight you really hard to protect their home” “Foxes are fierce, said Robert, they ate my rabbit.”

Libby, Evie and Katie asked to share a dance they had learnt at school today. Mrs. Colucci found the CD player for them to use. They had fun performing their routine to an audience and added props and different costumes to wear as they repeated their performances. They add a new piece to the end and are going to show that to their teacher tomorrow. Dylan and Alfie are playing with the cars, lining them up to move around the mat to get to the garage. Toby, Sam and Ben are building a ramp over the garage for the cars to be able to loop the loop and fly through the air!

In summary – Play can be fun, challenging and enjoyable for both adults and children. By helping children to take part in different types of play on their own and with others, and by providing a well-resourced play environment inside and outside, adults can greatly enrich the learning opportunities that play provides.

“Play is the answer to how anything new comes about.” Jean Piaget

?The Role and Value of Play in Education. (2016, Mar 19). Retrieved from http://studymoose.com/the-role-and-value-of-play-in-education-essay 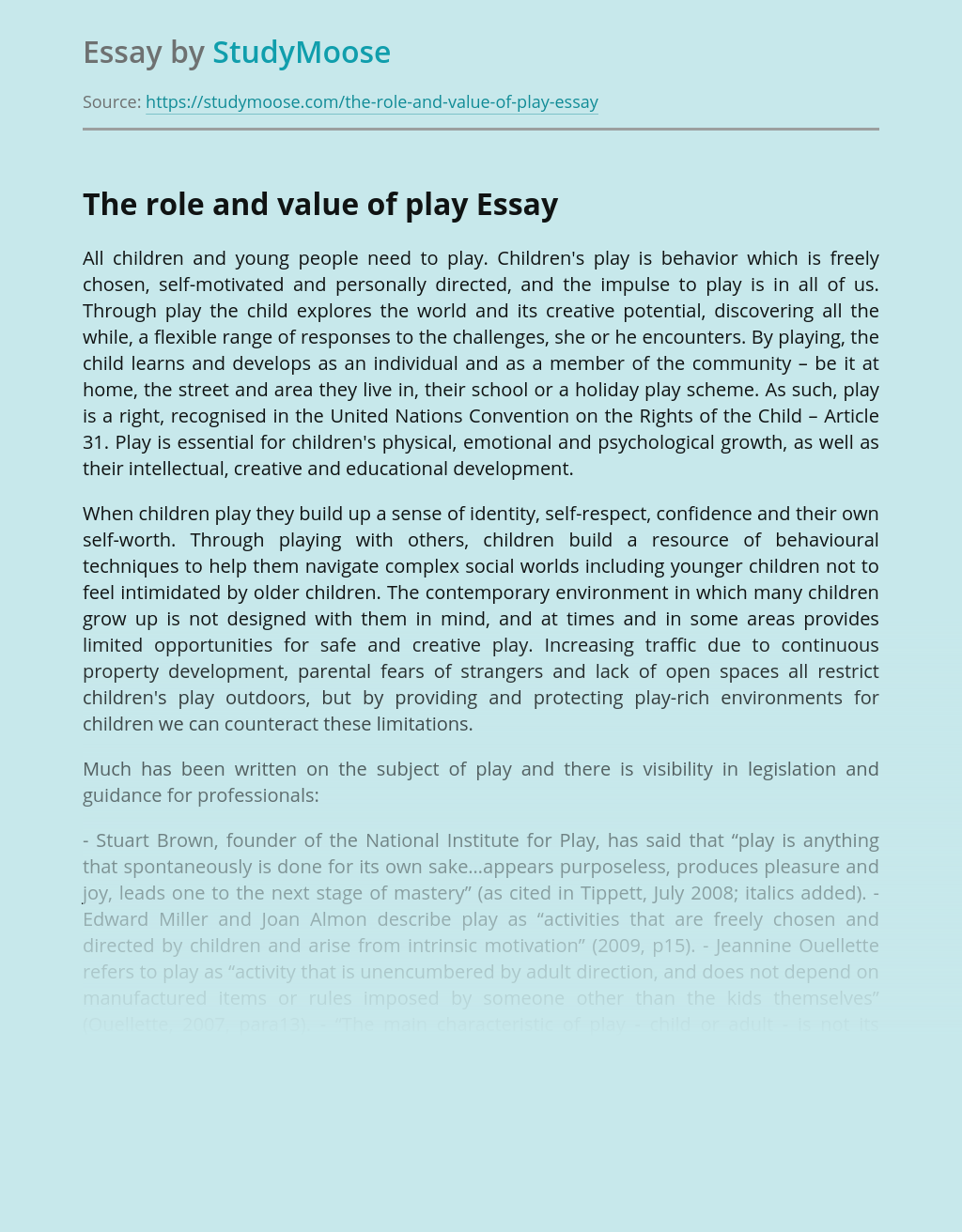 Don’t waste time
Get a verified writer to help you with ?The Role and Value of Play in Education
Hire verified writer
$35.80 for a 2-page paper
Stay Safe, Stay Original