The Rising of Ebola in Guinea, Liberia, and Sierra Leone

The Ebola outbreak in West Africa has alarmed many public health officials as they discover the death toll has risen beyond 3,800 due to Ebola (United States Department of Health and Human Services [USDHHS], (2017). According to Aljazeera (2014), this deadly virus kills more than half of its victims and cases amounting to 10,000 a are occurring each week. This can be a health issue if not brought under control. Based on these statistics the need for emergence response is reasonable and illustrates the importance for the need of quality health care in all types of countries.

Don't use plagiarized sources. Get your custom essay on
“ The Rising of Ebola in Guinea, Liberia, and Sierra Leone ”
Get custom paper
NEW! smart matching with writer

According to the United States Department of Health and Human Services [USDHHS], (2018), Ebola is an uncommon-deadly disease that can affect humans and primates. It is a virus caused by a group of viruses that are associated within the Ebolavirus group. Research by the USDHHS, (2018), have traced the disease to a two-year-old child, who perished in Guinea in December 2013. Then after several months there were mysterious reports about the disease causing many to have fever, diarrhea, and vomiting (USDHHS, 2018).

The mortality rate in these countries, Gueckedou, Macenta, Nzerekore, and Kissidougou, was 59 deaths out of 86 cases (BBC News, 2014). In Liberia there has been 4,809 deaths, Sierra Leone experienced 3,955 deaths, and 2,536 deaths in Guinea. These numbers illustrate the emergence of the up rise of Ebola and how this virus is killing many people. These three countries remain the main focus to the CDC, because of its rapid increase of death rate and poor surveillance skills.

Human are susceptible to Ebola via animal-human transmission; such as, bats, chimpanzees, forest antelope, etc. (BBC, 2014). The infection initially converges with cells the coating respiratory tract, eyes or body pits. In interpretation, the infection is entering and diffusing all through the human’s body. (2) Then the DNA from the infection is discharged into the cell and assumes control over cell’s framework capacities to reproduce itself. (3) New duplicates of the infection are formed and enter once more into the body’s framework. This incubation period can take place from two to twenty-one days. During this time period the carrier is not considered contagious and does carry any symptoms till this process is complete (World Health Organization, 2017).

Since notice of the outbreak in Liberia, Guinea and Sierra Leone, the Centers for Disease Control and Prevention has set in motion its Emergency Operations Center for the purpose of coordinating technical assistance and providing assistance to disease control associates in with activities. (United States Department of Health and Human Services [USDHHS], 2017). “The CDC personnel arranged to be in West Africa to aid with response efforts, including surveillance, contact tracing, data management, laboratory testing, and health education” (USDHHS, 2017). CDC staff were also provided help with tools to aid in “logistics, communication, analytics, and management” (USDHHS, 2017). To prevent the infection from spreading across country, explorers leaving West Africa were screened at air terminals. Screenings help to recognize those in danger for Ebola and keep the transmission of the sickness over the outskirt.

According to the USDHHS (2017), The United States additionally organized passage screenings for suburbanites originating from Guinea, Liberia, Sierra Leone, and Mali by steering them to assigned airplane terminals better ready to survey explorers for hazard. The USDHHS (2017) has explained that in the most exceedingly bad states of the epidemic, the CDC has prepared 24,655 healthcare workers in West Africa on disease counteractive action and control rehearses. In the United States, in excess of 6,500 individuals were prepared via live training occasions all through the reaction (USDHHS, 2017). According to USDHHS (2017) , research facility limit was extended in Guinea, Liberia, and Sierra Leone with 24 labs ready to test for Ebola infection before the finish of 2015.

Culture is one component that increases risk of receiving this virus. Ebola transmits through close physical contact with tainted individuals, along these lines this can turn into an issue because of many, in the West African nations, as of now influenced by the episode, practice around religion and passing including close physical contact (). Embracing is a normal piece of religious love in Liberia and Sierra Leone, and over the locale. According to—- In these nations the entombment readiness includes washing, contacting and kissing. Those with higher authority are frequently in control with washing and setting up the body. For a lady this can incorporate plaiting the hair, and for a man shaving the head.

Since West African nations have never encountered an Ebola episode, they were ineffectively arranged for this new illness. Health officials had no knowledge of this disease and its detection in order to treat it and prevent it from spreading. Before the outbreak happened, the three nations had a proportion of just a single to two specialists for each 100,000 populaces (World Health Organization [WHO], 2015). Today, with the uprising rate of people dying from Ebola, there is an urgent need to educating medical facilities. Health care officials must provide help, engaging in their quality care, particularly with rehydration and improvement of electrolyte homeostasis, which enhances the odds of survival (World Health Organization, 2015). Outbreaks of Ebola are highly associated with populations dealing with war, poor economies and poor-quality health care. In West Africa providing quality care is difficult due to lack of supplies and lack of locations. In light of this issue greater treatment facilities are being built by “MSF, the UK and US governments, WHO, and other partners” (WHO, 2015).

Guinea, Liberia, and Sierra Leone, which are among the developing countries in the world, had only recently integrated from after years of civil war that left health treatment centers badly damaged or destroyed and created a generation of young adults with little or no education. This creates a vulnerable population, because these uneducated individuals may not have knowledge of how severe Ebola is, how they can prevent themselves from getting it, and how to recognize the symptoms if they do develop the virus. According to the World Health Organization (2015), street frameworks, transportation administrations, and media communications remain an issue in every one of the three nations, particularly in provincial settings. These transportation administrations have deferred the transportation of patients to treatment focuses and research centers’ examples, imparting alarms, reports, calls for help, and public interventions.

In a study performed by several researchers, they were able to analyze exposure patterns on Ebola. Researchers reviewed 286 cases ranging from January 2014 to February 2015 on the three most infectious countries: Guinea, Sierra Leone, and Liberia (Cleaton, J. M., Viboud & Simonsen& Hurtado& Chowell, 2016). Between genders they found that the variation was similar rather than a gap being present between the two. They did find that family exposure was higher among females than males. This may be due to the women around family more than men. In contrast, men are highly susceptible to hospital-based transmission and funeral-based transmission than women. Overall health officials concluded that most are exposed from family households than sex transmission and funeral-based transmission. (elaborate on host factors)

Gaps are presented within the health facilities and the general population. Since an outbreak similar to Ebola has never occurred, many do not know how to manage it. Gaps in knowledge about the disease and data and records of patient are poorly kept making it difficult to account for all risk factors of the disease and the locations of transmission. An example, that illustrates what is happening in infectious countries of EVD, is in Ghana where they found that 37.8% of cases were suspected to have Ebola, but no records were found on these subjects (Awini & Booney & Frimpong & Ampofo Koram, 2017). High proportions of missing data on medical forms have become an issue of keeping up with surveillance making it difficult to determine the target to focus on. In Sierra Leone stopping transmission is especially troublesome in the packed developing cities, such as, the capital, Freetown.

Also following contacts of Ebola patients is still not being done efficiently, while numerous contacts are in effect persuasively isolated in their homes, now and again encountering deficiencies of nourishment or water. These isolated measures can dishearten families from looking for early treatment for their tired relatives because of a paranoid fear of being secured their homes. (Medecins Sans Frontiers, 2015). Another struggle that they face in Sierra Leone is the public health system has a lose framework and is barely functioning at an efficient rate. This is due to many health workers dying from Ebola, medical facilities are in chaos, and non-Ebola disease patients are unable to receive the treatment they need.

Temporal variations are mostly present during the rainy season, “from July through December, county health workers struggled with impassable or difficult roads that made it hard to transport lab specimens or get sick patients to Ebola treatment centers in Monrovia” (Schnirring, 2014).Furthermore, numerous networks don’t have connection to phones which makes it difficult for nearby health authorities to report presumed patients, to orchestrate clinical assessment, or get auspicious lab results. For instance, laborers in Rivercress region had to take a 6-hour round trip to a neighboring region to deliver surveillance report, and a three-day delay to receive lab results. (Schnirring, 2014). This information shows the difficulty that developing countries face with Ebola during the presence of terrible weather conditions. When the analysts inquired in November, they found that a few zones still didn’t have prepared work force and kept on having issues with transportation and correspondence (Schnirring, 2014).

Epidemiologists should provide strict policies and enforce all patients who check into these health care facilities to be documented of their symptoms and be categorized into a file if symptoms are similar to EVD. Epidemiologists should also work on interventions to promote hygiene when preforming a burial to prevent exposure from infectious death victims. Also, classes should be established to teach the public about what Ebola is, how to recognize it, how to prevent it, and what to do if you get infected with EVD. At societal level it is necessary to have approaches to engage in partnerships to provide successful healthcare and an efficient data system (WHO, 2015). The rising rates in each country is alarming and shows that global approaches are needed to intensify the international response (WHO, 2015). Overall, based on the data concluded, it illustrates why good surveillance is needed and shows what effect it has when not present. Guinea, Liberia, and Sierra Leone should remain the focus to lower the transmission rate.

The Rising of Ebola in Guinea, Liberia, and Sierra Leone. (2021, Apr 24). Retrieved from https://studymoose.com/the-rising-of-ebola-in-guinea-liberia-and-sierra-leone-essay 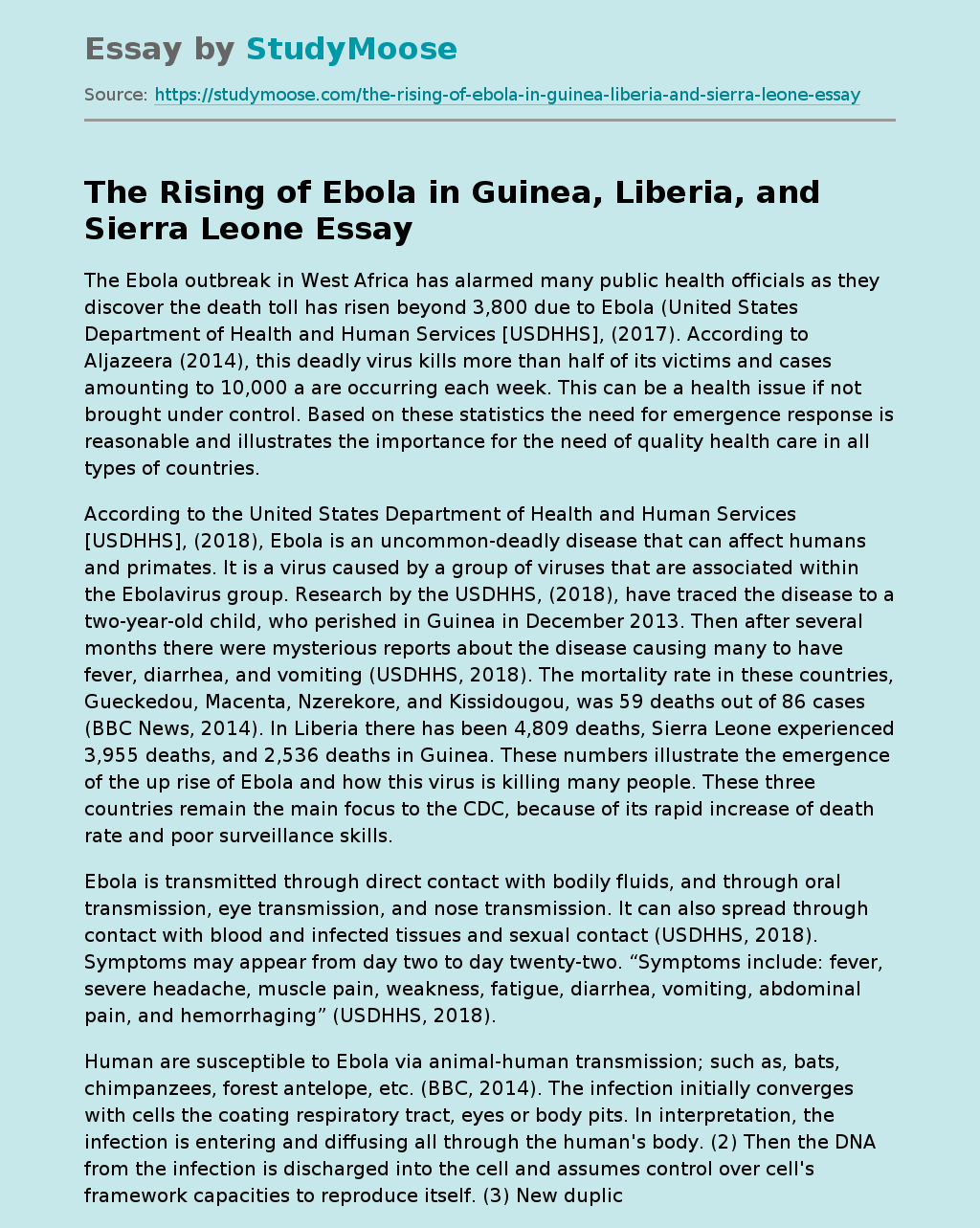