The Trobrianders of Papua New Guinea by Annette B. Weiner

The book, “The Trobrianders of Papua New Guinea”, is a study in the fieldwork of ethnography conducted by Annette B. Weiner. This study is her pre-doctoral work in the study of Anthropology (1971 & 1972), and in 1974 she received her Ph.D. This work represents over fifteen years of study of the Trobrianders. Her caseworks began with the fieldwork of Bronislaw Malinowski, who was the first to do any type of study of these people. Main attributes to Dr. Weiner’s work is that it continued where Malinowski left off and filled in some of the gaps in understanding or misunderstandings he had and some things that were overlooked.

Don't use plagiarized sources. Get your custom essay on
“ The Trobrianders of Papua New Guinea by Annette B. Weiner ”
Get custom paper
NEW! smart matching with writer

Dr. Weiner’s work gives the reader an inside look at the Trobrianders culture and behavior. It helped to clarified meaning of some of the customs these people used in this culture such as matriliny, sexuality, and chiefly power. One of the main focus Dr. Weiner had was on “women’s productive activities” or wealth, where as Dr.

Dr. Weiner wrote, “My taking seriously the importance of women’s wealth not only brought women as the neglected half of society clearly into the ethnographic picture but also forced me to revise many of Malinowski’s assumptions about Trobriand men” (p.5). This study was conducted before external changes of the 80’s influenced change in the culture of the Tribrianders.

In the first chapter the author discusses the basic principals that were factors of change for the Tribriander culture during her years of study in the late 70’s early 80’s.

At this time New Guinea was working on self-government and national independence and as the author wrote, “this particular time period provided important insights into the past history of the island while underscoring Trobriander impressive resistance to foreign intervention” (p.13). The efforts by the Trobriander was to keep the traditional economic and activities that was linked to the wealth of the women and the role of wealth as it relates to the political life and economics of the men.

When looking at the death and birth rituals of the culture. Death was resisted by the Tribriander’s. This resistance to change was evident in material wealth, land, social and political relationships. Birth had different yet complimentary roles in the family with definite political consequences. To the Tribriander matrilineal identity, “revolves around the belief that conception occurs through women and their ancestral spirits” (p.56). The bond between mother’s blood and child is strong. The man’s part in the procreation is not recognized.

Adolescent sexuality, discussed in chapter four, was very important to this study. It describes how children seven or eight begin playing games and imitating adult sexual attitudes. In four or five more years they actually look for partners. They change partners often experimenting with each. They will leave their parents home and have a small house usually next door or a few doors down. This gives freedom to the adolescents to make their own sleeping arrangements. During this time the elders in the village will watch and guide the young people to fulfill their potential as productive adults.

“Is a young woman capable of making fine skirts? Does a young man demonstrate his increasing knowledge of yam cultivation?” (p.67) Their productive abilities are not pressured upon the adolescents, their responsibility is limited at this time, and much freedom is given to pursue their own adventures are stressed. Lovers in the adolescent’s life will help when the young person enters marriage, “Gaining lovers is not merely a frivolous adolescent pastime. It is the first step toward entering the adult world of marriage.” (p.78) Yams and women’s skirts are symbols of status change and their life ahead in marriage and play key roles in their society.

It is the talent for producing and controlling objects of wealth that are important and stressed in this culture. These will help in securing networks of social and political relationships that have the potential for generational continuity. These kinds of network are multiplied by their polygynous marriages, and marriages only occur when the villager decide when a chief is influential enough to support them. Yams and yam production is economically instrumental in the Tribriander society.

“A commoner, with only one wife, can never hope to outdo a chief in yams.” (p.106) Only low ranking chiefs had one wife even if his hamlet had men helping to grow gardens, without multiple wives his status is lower than a chief with many wives. Large amounts of productivities and expenditures of resources are required for this culture. And even the death of someone, “transforms a harvest of youthful energy and excitement into a productive effort of a different order in which men’s resources are needed to procure women’s wealth.” (p.117)

The study deals with how objects form the important stages of a person’s culture and what is valued in that culture shows how weak social and political relations are. But it also defines the people in who they are and where they belong. The sociological conflict between individual will and societal pressures are shown clearly in this study.

SIGNIFICANCE OF THE BOOK TO THE COURSE:

The significance of this study to anthropology is priceless. When Malinowski first began his study of anthropology it was just barely established and his fieldwork was the first ethnography that gave academic substance to the field. It gives in detail a culture that much of the customs are now being lost in assimilation. It helps the reader in understanding that ethnography is the study of origins, history, and customs of groups of peoples. This was an important culture to study at that time because the culture centered on chiefdoms and was a matrilineal society.

I found the book easy to read with information on the culture very informative. There was mention that ethnographies are just a way of fictionalizing a culture, but I disagree. Ethnography’s are essential into seeing a glimpse into a culture that would not be assessable to many people and help in understanding ethnocentrism that many cultures have in today’s world. It gives us clues as to who we are and where we come from. Dr. Weiner’s study and findings are clear and will be very useful to future studies. I recommend this book to laymen as well as students in cultural anthropology.

The Trobrianders of Papua New Guinea by Annette B. Weiner. (2017, Mar 20). Retrieved from https://studymoose.com/the-trobrianders-of-papua-new-guinea-by-annette-b-weiner-essay 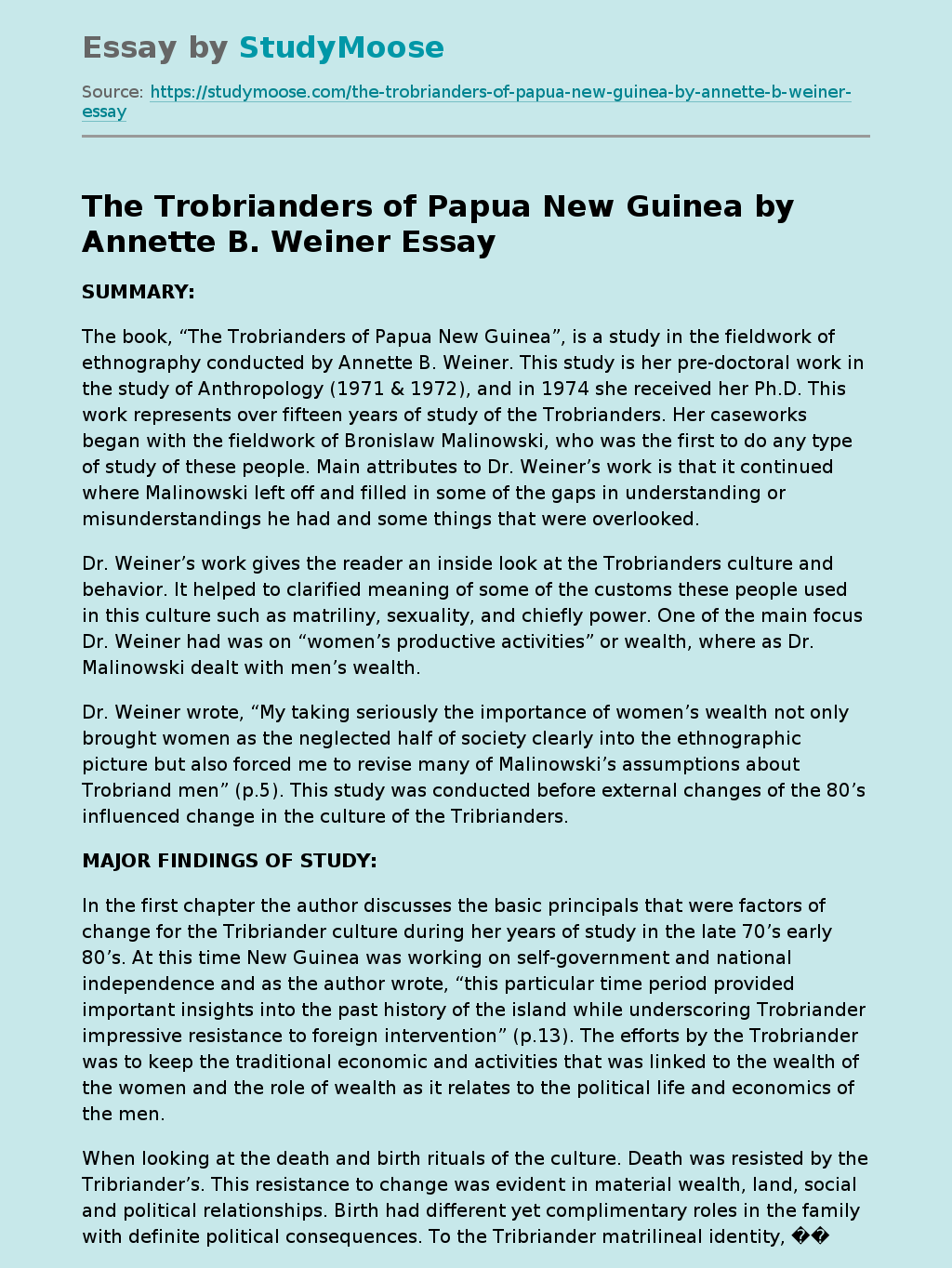