The Rhetoric of Lincoln's Gettysburg Address

In “The Gettysburg Address,” Abraham Lincoln reminds the nation of what they are fighting for. A reverent Lincoln commemorates the lives that were lost at the Gettysburg battle while using it as a cue of why the war is taking place. In a speech like no other, given on the site of one of the bloodiest battlefields of the Civil War in Gettysburg, Pennsylvania, the 16th President of the United States reflects the utter freedom and equality the nation was raised upon.

Don't use plagiarized sources. Get your custom essay on
“ The Rhetoric of Lincoln’s Gettysburg Address ”
Get custom paper
NEW! smart matching with writer

This speech is commemorated as one of the greatest speeches in American history because of its impact upon the nation in only a short two minutes of length. With no invitation to the memorable event until the last minute and surrounded by negative energy from the American people, Lincoln was able to enchant the multitude with his words of rhetoric. The Gettysburg Address is the epitome of rhetoric because of the President’s use of ethos, logos, and pathos reasoning that impacted the lives of millions of Americans through his persuasion of unifying the nation.

Throughout the speech, Lincoln develops a strong appeal of an ethos which makes him credible and trustworthy. Trust is needed for him because of the chaos the country is in; a nation divided because of unspeakable acts of slavery and inequality. As an authority figure and an honorable man, it was not hard for him to persuade the American people. The fact that Lincoln is the President of the “home of the brave” speaks for itself as ethos because of his authority as the leader of the country (“The Star-Spangled Banner Lyrics”).

The eloquence of the speech’s diction serves as a reminder to the nation that he was a respectable man. Words like “hallow,” “dedicated,” “devotion,” “nobly,” and “honored,” contribute to his overall reverent tone. It is vital that Lincoln proves himself as a reputable man who honors the soldiers who died for people to believe what he is saying. His main purpose of encouraging perseverance and unity cannot occur without his attestation to the bravery of the soldiers who passed. Also, the repetition of the word “we,” creating the rhetorical technique of anaphora, appeals to the President’s credibility at the time of war. Americans were devastated during the Civil War, especially after the bloodiest battle ever fought on American soil, Gettysburg (“Government Book Talk”). The anaphora effectively persuades the nation to unify because of the sense of human obligation that Lincoln employed. Not only does Lincoln include the community in his speech, but he includes himself as well. Sentences like, “We are met on a great battlefield of that war” produce the feeling of unity between the Union and Confederates (Lincoln 602). Lincoln describes the battlefield as “great” because he believes that great things happened there in hopes to achieve complete freedom. Diction and anaphora are two instances where Lincoln thrives in creating a great ethos to persuade his addressees that unity is essential.

Abraham Lincoln magnifies his persuasion using logos, making the unification of the United States’ people seem logical to his addressees. The first sentence of The Gettysburg Address ends with the wise words, “all men are created equal” (Lincoln 601). This serves as an allusion to the Declaration of Independence. Lincoln implants logos through this allusion because he presents the principle foundation of America. This proposition that holds the right to “Life, Liberty, and the pursuit of Happiness,” reminds Lincoln’s audience that their nation was created because of such beliefs that must be preserved (“The Declaration of Independence: A Transcription”). This rhetorical technique meritoriously convinces the nation that, in order to have such rights, they must fight for freedom and equality as a union. Lincoln then uses antithesis or parallelism while employing logic on the sacrifices made by the brave men who passed. He expresses, “but, in a larger sense, we cannot dedicate- we cannot consecrate- we cannot hallow this ground” (Lincoln 602). In other words, nothing can be done to change the sacrifices made by those who fought on the battlefield except to work as a union for the purpose of finishing the work that was started. This quote leads families and friends of the dead and wounded who were present at the battlefield cemetery in Gettysburg, Pennsylvania to reconsider their negative thoughts on the Civil War. Emotionally wrecked, many Americans were fed up with the war and were beginning to despise it. Lincoln’s persuasions using logos with allusion and antithesis techniques are some of the many ways where he tries to change the mentality of American society as it relates to the war.

The Civil War was a time of constant strife within the American family, a country in battle with it. The death of 23,000 Union soldiers at Gettysburg wrecked the homes and hearts of millions of families across the nation. These memorable fatalities contribute to the reason why the Gettysburg Address appeals to the audience’s emotions. Within two minutes, Lincoln informs the American people that he felt the same way they did about the losses; it was acceptable to mourn the death of their dear warriors. Lincoln’s ability to effectively show his emotions made his appeal to pathos vivid and influenced the idea of unification. He used his speech to remind the nation that the reason for the deaths of thousands of soldiers could not be in vain; their efforts had to be remembered, even if they were painful to process. The repetition of the word “we” instead of “I” or “you” also makes Lincoln seem intimate with the multitude. While building Lincoln’s credibility, the use of the word “we,” makes the American people feel that the President is someone who they can empathize with. Lincoln’s emotional appeals are evident in the speech, “We have come to dedicate a portion of that field, as a final resting-place for those who here gave their lives that that nation might live” (602). These words allude to his overall point that the soldiers have died for the nation to live. By stating that they are standing at Gettysburg, the calamitous battlefield, Lincoln makes his audience feel emotional. Lincoln again remembers the deceased in the line, “It is for us the living, rather, to be dedicated here to the unfinished work which they who fought here have thus far so nobly advanced” (602). It is necessary for Lincoln to use these emotional appeals because it moves the audience to put aside their resentment over the war. This line of the speech, in correlation with Lincoln’s pathos, emphasizes the emotional need for unification within America; it is the responsibility of the living to finish the work that was gallantly advanced by the deceased soldiers.

The Gettysburg Address, written entirely by the unforgettable 16th President of the United States, did not fail to unify the country with its rhetoric. About a year and a few months after Lincoln’s address, the Confederate surrendered to the Union, finally ending the tragic Civil War. Lincoln’s persuasion accented by ethos, logos, and pathos reminded the American citizens that fighting for the freedom the United States was raised upon is necessary. Lincoln encourages his audience by employing the use of rhetorical techniques. Lincoln’s strong ethos sways Americans to believe that he is a credible person and a leader. His logos supported with allusions and parallelism provide his American audience with a clearer logic of why they need to keep fighting for the nation. Finally, his deliberate expression of emotions provides the pathos needed to make the Americans reconsider their hatred toward the Civil War. This speech has stood the test of time and lives forever in the hearts and minds of the American people.

The Rhetoric of Lincoln's Gettysburg Address. (2020, Oct 01). Retrieved from https://studymoose.com/the-rhetoric-of-lincolns-gettysburg-address-essay 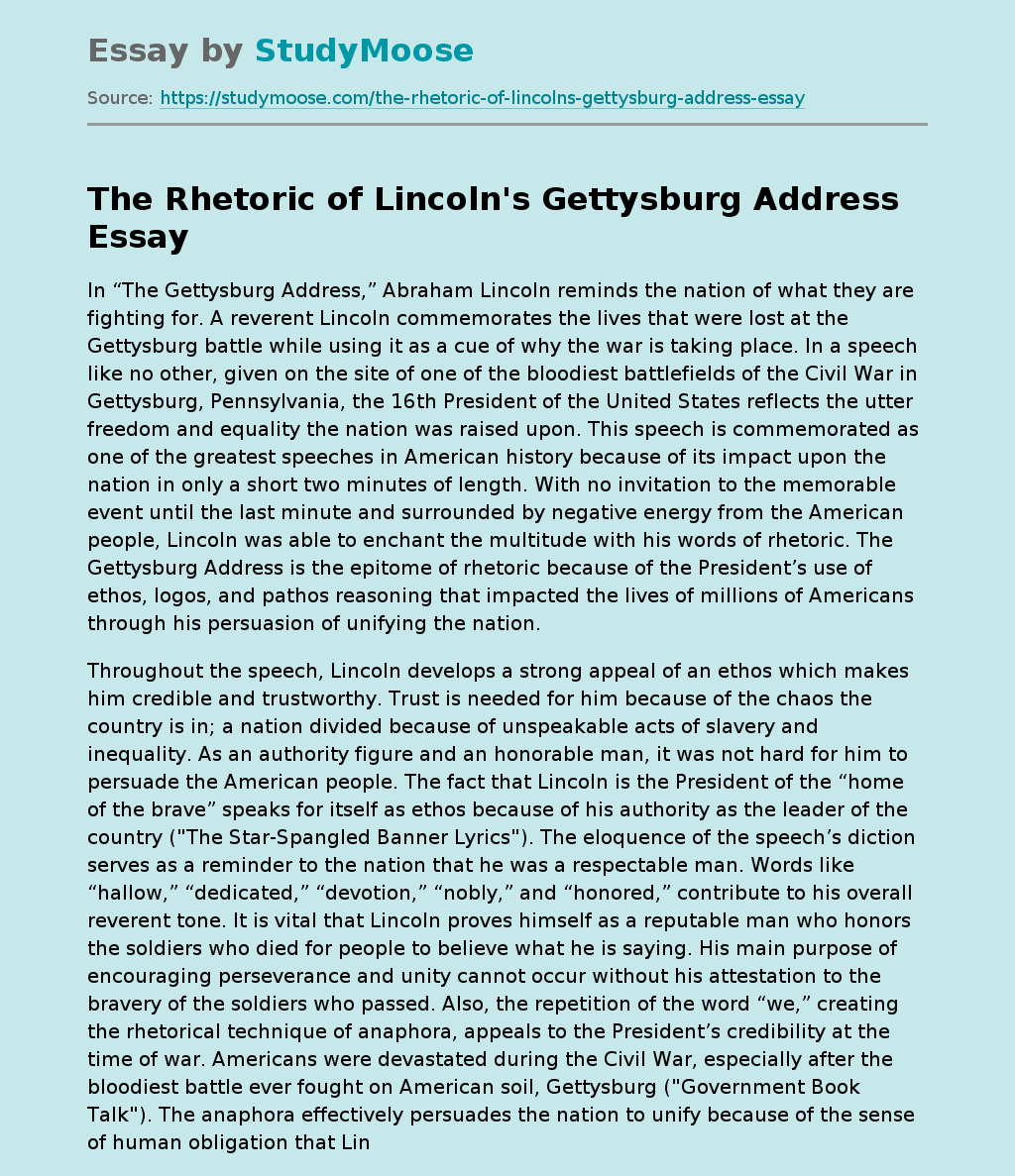