The famous Gettysburg Address is a speech that U.S. President Abraham Lincoln delivered during the American Civil War at the dedication of the Soldiers’ National Cemetery in Gettysburg, Pennsylvania, on the afternoon of Thursday, November 19, 1863, four and a half months after the Union armies defeated those of the Confederacy at the Battle of Gettysburg. It is one of the best-known speeches not only in American history but also throughout the world.

This speech was a motivational speech for the citizens of the United States of America.

Don't use plagiarized sources. Get your custom essay on
“ Stylistic Analysis of Gettysburg Address ”
Get custom paper
NEW! smart matching with writer

It was a speech made in a time of confusion and sadness aiming to generate hope and motivation amongst the citizens of the USA. In a speech that was comprised of only 10 sentences and 272 words. Lincoln was able to strike that would resonate not only with his audience but one that would resonate through time.

Lincoln commemorated this address with a hopeful, serious, and empathic tone. His display of tone can best be seen when he appeals to the audience with ethos and pathos when he announces, “We have come to dedicate a portion of that field, as a final resting place for those who here gave their lives that that nation might live”.

This usage of an emphatic and serious tone showcases Lincolns strong feelings towards the national cemetery that makes the reader agree with his emotions that lead to the reader also feeling the same heartache and grief.

Through the speech, Lincoln never addresses the audience as “you,” instead he uses “we”, “our” and “us” to connect with the audience.

As president of the USA, he addresses the people as one nation to fix it. He connects with the audience because a majority of the audience had suffered a loss of a family member, further developing a bond between him and the audience. This bond makes the audience feel more attention from Lincoln that makes sure the audience’s concentration does not stray.

Additionally, to maintain the audience’s focus Lincoln uses a lot of stylistic features that ensnare the reader’s attention.

“Four score and seven years ago our fathers brought forth on this continent a new nation, conceived in liberty, and dedicated to the proposition that all men are created equal.”

“Four scores and seven” is much more poetic, elegant and noble than “Eighty-seven”. This hooks the audiences focus as it is an interesting choice of vocabulary. Another contextual fact that adds to the persuasion and emotion of this speech is that because 87 years earlier, the United States had won its freedom from Britain. Lincoln reminds the audience of the founding principles of the country: liberty and equality. He invokes emotions of patriotism by using the nation’s independence and founding principles. this influences the audience to a greater degree causing them to believe that Lincoln is right and allows them to believe in what Lincoln believes. This feeling of patriotism sets up the next sentence flawlessly.

“Now we are engaged in a great civil war, testing whether that nation, or any nation, so conceived and so dedicated, can long endure.”
Here, Lincoln signals the challenge: the nation is under attack. This creates a sense of urgency and threat. He also extends the significance of the fight beyond the borders of the United States. It is not just a question of whether America could survive, but rather question of whether any nation founded on the same principles could survive. Thus does the war and the importance of winning it take on an even greater significance.

“We are met on a great battlefield of that war. We have come to dedicate a portion of that field, as a final resting place for those who here gave their lives that that nation might live. It is altogether fitting and proper that we should do this.”

In this quote Lincoln turns to recognize those who have fallen for their country.

He uses contrast effectively in this quote. By stating “those who here gave their lives that this nation might live” Lincoln makes what is perhaps the ultimate contrast: life vs death. This stylistic feature works efficiently as people are naturally attracted to opposites, so contrast should draw attraction and create interest. Communicating an idea juxtaposed with its polar opposite creates energy and emotion which is transferred to the audience creating an effect of optimism and provides the basic feeling of hope. Another advantage of this feature is that by moving back and forth between the contradictory poles the author encourages full engagement from the audience.

He uses consonance the repetition of the same consonant in short succession — through words with the letter “f”: battlefield; field; final; for; fitting.

Notice the use of the rule of three: “can not dedicate … can not consecrate … can not hallow”. This is a powerful public speaking technique that can add power to words and make them memorable. This adds a punch to the delivery which makes sure the audience receives it and this too sparks an emotional response in the audience. It creates a sense of responsibility, that it is their duty to remember them.

Lincoln outlined his speech chronologically, meaning it went from past to future. Lincoln begins his speech by contrasting how the USA was “conceived in liberty”, giving birth to a united nation yet currently there are many soldiers losing their lives by fighting against each other. For the future, Lincoln hopes that the living will help make everything all better and construct a nation that will represent equality and democracy. 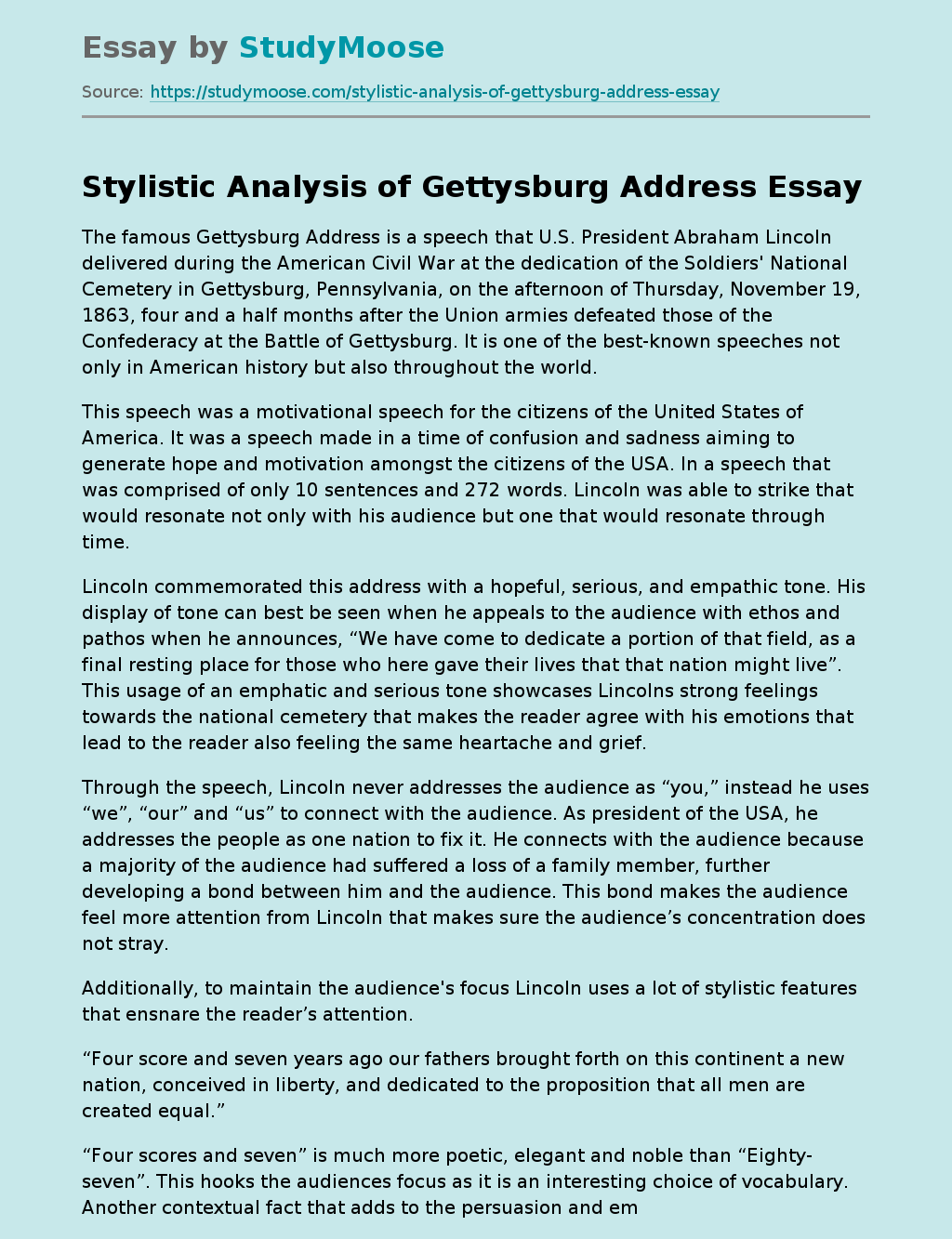