1. How do the interpersonal communications skills of Peter Clark affect behavior, human relations, and performance at the Ranch? A: “Peter Clark has to continually communicate with his partners and managers, and nothing takes the place of sitting down face-to-face during regular weekly meetings and listening to each other to continually improve operations.” (Page 174) “Interpersonal skill is the ability to work well with a diversity of people. Interpersonal skills have also been called relationship management.” (Page 21)

Peter certainly works well with others; he has a strong way of building relationships and gaining the trust of those who work for him and those who come to the club.

Don't use plagiarized sources. Get your custom essay on
“ The Ranch Golf Club Case ”
Get custom paper
NEW! smart matching with writer

He is involved with his staff and his business because he wants to ensure the success of his company and that he gets the feedback from everyone to be doing everything possible to make a pleasant experience for members at the club. Peter cares for his club and everyone there at a personal level, he gets is there, he listens he wants to be a part of the process unlike some other owners of businesses.

He enjoys taking part of the club atmosphere and interacts with the players.

This would make the players feel valuable that what they share with Peter and his management staff is taken into consideration and changes are made from their feedback. This all results in positive performance from Peter, his partners, and the staff at the Ranch, everyone is striving to be better at their job and exceeding expectations and being one of the best golf courses in New England so they are not to tarnish their reputation.

2. Do you think Peter Clark spends more time sending or receiving messages, or an equal amount of time doing both? A: I believe that Peter Clark spends an equal amount of time sending and receiving messages. He is interested in what people have to say. “Peter Clark increased his management role to become the managing partner, overseeing day-to-day operations. Korby works full time too. The key to success at the Ranch is clear, open communication.” (Page 174) The Ranch’s foundation of success is communication; everyone works very hard to make this work. “Peter and Korby Clark spend much of their time at the Ranch talking to the players about their experiences, with the focus on listening for ways to make improvement.”(Page 174) So Peter and Korby are receiving the messages of the players needs and then they go to their partners and employees to send the message from the feedback and makes changes that would continue the success of the club. Peter Clark seems to have made an equal balance of the two.

3. Which level of listening does Peter Clark appear to be on? A: Peter Clark is a “projective listener – the receiver listens without evaluation to the full message attempting to understand the sender’s view point.” (Page 162) Peter takes the time to speak with the players at the club and fully listens to what they have to say, and both the player and Peter are left feeling that they are both understood at the end of the conversation. No one dominates the conversation; each participant feels they are being listened to.

Do not tune out the speaker because you do not like something about him or you disagree with what she is saying. If the topic is difficult, do not tune out; ask questions. Do not think about what you are going to say in reply; just listen.” (Page 162) Clark has no problem staying tuned in because his objective is to benefit from the conversation with what his employees and the players at the club have to say. Active projective listening tip number 6 Ask questions. When you feel there is something missing or contradictory, or you just do not understand, ask direct questions to get the person to explain the idea more fully.”(Page 163)

Since communication is the key to making things work at the Ranch asking questions is a fundamental everyone is most likely using when they have meetings so that everyone is on the same page and understanding thing the same way. “Active projective tip number 9 Think. To help overcome the discrepancy in the speed between your ability to listen and people’s rate of speaking, use the speed of your brain positively. Listen actively by organizing, summarizing, reviewing, interpreting, and critiquing often. These activities will help you to actively listen at the projective level.” (Page 163)

Peter listens to people and he organizes his thoughts summarizes and reviews them and then presents with his partners at meetings at the Ranch. These meetings allow everyone to be involved and improve everyone’s performance and experience at the club. “Active projective tip number 10 Evaluate after listening. When people try to listen and analyze or evaluate what is said at the same time, they tend to miss part or all of the message. You should just listen to the entire message and then come to your conclusions.” (Page 163) Peter Clark truly listens to people and he waits until after the conversation to evaluate what the best plan of action is. He is active in his environment and wants to know what people think. From the stand point of having been an employee it is great that Peter Clark is an active boss and he cares about the employees and players at a personal level rather than just sitting on the side lines.

5. Assess Peter and Korby Clark’s use of feedback. A: Peter and Korby use 360 – degree feedback – “The 360- degree method provides performance feedback in four directions: downward from the supervisor, laterally from peers or coworkers, upward from subordinates, and inwardly from the person getting the feedback. When appropriate, customers and suppliers also provide feedback on different aspects of performance. Unfortunately, feedback is not always as effective as is typically assumed, and not so much the concept but the implementation of 360- degree feedback has been criticized.” (Page 164)

Even though “the Ranch does not have a formal 360-degree feedback system. However managers who evaluate employee performance interact regularly with each employee, employee peers, the players, and other managers at the Ranch, and they use the feedback from other in their performance appraisals.” (Page 175) This form of feedback is a positive way to make the employees feel their voice is heard, they hear how they are doing and the employees and managers seem to have a close interactive relationship so everyone a positive work environment. So if an employee is doing something well they will know it.

6. Which response style do you think Peter Clark uses most often? A: “Reflecting response paraphrases the message back to the sender to convey understanding and acceptance. The reflecting response is used by the empathic projective listener. Most messages have two components- feelings and content. A reflecting response paraphrases the message back to the sender to show him or her that the receiver understands and values and accepts him or her. The sender can then feel free to explore the topic in more depth. Empathizing has been found to affect employees’ attitudes and behavior in positives ways.” (Page 169) This response style that Peter uses goes back to making the employees feel valued and that they are heard and seen. A reflecting response style also applies to how Peter interacts with the players at the club, he listens to them and makes it known that he understands them. When Peter uses this response style he also is improving job performance and improving the quality of the player’s experience at the Ranch.

8. Asses Peter Clark’s personality in relation to each of the Big Five dimensions (chapter 2). A: “The Big Five Model of Personality categorizes traits into the dimensions of surgency, agreeableness, adjustment, conscientiousness, and openness to experience.” (Page 39) Surgency: Peter is a good leader, he follows the dimension because he is an active part of the staff at the Ranch, and he interacts with the players and the employees. He is assertive and wants to improve the Ranch success’s by being involved on the management level. Clark also values a “supportive working relationship which includes sitting down to talk and really listening to other person.” (Page 175)

Agreeableness: Since the agreeableness traits has to do with being able to get along well with others I believe that Peter Clark handles this trait well, he is involved with the managers, staff and players at the club, he is liked by all. Clark is also friendly and sociable this goes back to him being an active staff member who takes part in meetings and things around the club. Adjustment: Clark is good under pressure he enjoys taking part in his business ventures to see through to their success. He believes in having a positive attitude and being a team player. Conscientiousness: Peter takes responsibility for his company. He is an involved member of the staff instead of just sitting in his office demanding things from his staff he chips in and does his part.

Openness to Experience: Clark has shown that he is willing to try new things; he was running Jiffy Lube business before he started managing the golf course. He did not have any experience running a golf course but he was determined to open one, so he gathered the right people to help him start this business. He was open-minded to the experience even when the banks would not provide him the funding because he did not have the knowledge of running a golf club business. Clark did what he had to do to make things work and implemented different techniques and was willing to listen to others feedback in order to make the Ranch a success. 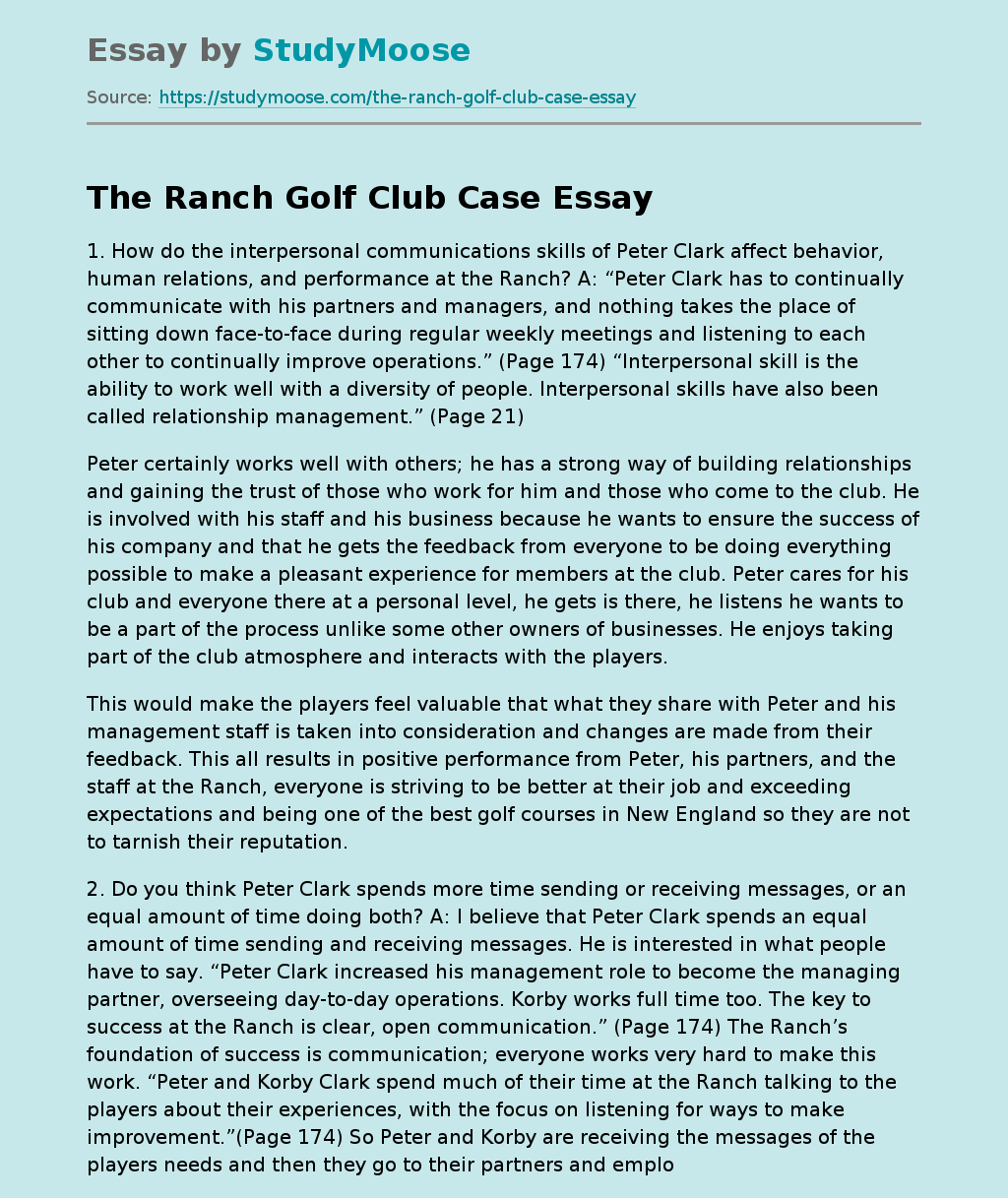