The Pros and Cons of Raising the Minimum Wage

Don't use plagiarized sources. Get your custom essay on
“ The Pros and Cons of Raising the Minimum Wage ”
Get custom paper
NEW! smart matching with writer

It can also decrease the gap in income inequality, and improve the public’s health as a whole. Increasing the minimum wage has and will always be a very controversial topic that has many positive and many negative aspects to it, but raising the minimum wage just may be the best decision for our economy.

We should raise the minimum wage because it will reduce the people’s reliance on government welfare spending. You see as the nation grows the government spends more money assisting people directly or through family members. The main reason people do not want to raise the minimum wage is that there are many people afraid that once the minimum wage is raised that it might become the main point for setting workers’ wages. Another is that the companies may have to fire workers because they will not be able to pay all of the employees for their work’s worth.

If there are pay rises, we must have the means to pass costs onto the consumers or there must be an increase in productivity. We will have the means to pass costs onto the consumers because the majority of the consumers are the workers whose wages have risen meaning they now have more money. The more money they have means the more they can spend it on the products made which gives more profit to the government because the more money a person has the more they have to spend. Also increasing productivity will also be better because the more quality a product has the more that the consumer is willing to spend on it. By approaching these benefits of a minimum wage increase to a low wage worker is the difference between the hourly wage before and after the pay rise taking in all of the positive aspects such as the more the worker gets paid the less likely they are to leave the company, lower unemployment rates, and higher wages increase tax revenues. Many studies show graduated increases in the minimum wage have a low impact on unemployment, but there is still a small impact which is much better than unemployment rates increasing. The minimum wage has not kept up with inflation. Which as a result, the pay of many workers, more of the big families (4 or more members), are now well below the poverty level, increasing the wages may bring them out of poverty. Some of the negative aspects would be that employers would hire fewer employees especially entry-level ones, higher wages means that prices will increase so employers can cover the high labor costs, a higher wage may increase the high school dropout rates, also an increase to the minimum wage would provide a motive for employers to invest in technology and machinery to increase productivity rather than human resources.

By raising the minimum wage it could improve the public’s overall health. In an article written by Leigh J. Paul. It was a study done by the Komo et al that was to see the effects that would come with increasing the minimum wage and the majority of them were positive. They had seen the rates of Low Birth Weight (LBW) decrease and fewer neonatal deaths (death during the first 28 days of life). There were also changes in the ages of mothers, poverty rates, and cigarette sales. An estimate indicates that a hike in the minimum wage to $12 per hour by 2020 would lift wages for 35.1 million workers meaning that the people can now actually afford stuff such as insurance, pay their bills, and all of the necessities of life today. Raising the minimum wage can affect the public’s health through women who are pregnant, and most pregnancies occur within nine months a woman’s financial, psychological, and physiological well-being could be affected by an increase in his or her partner’s wage. Statistics in raising the minimum wage across the states include fixed effects for years. If all states had raised their minimum wage by $1 in 2014 the Komo et al estimate 2790 fewer Low Birth Weight (LBW) births and 518 fewer neonatal deaths (death during the first 28 days of life).

Increasing the minimum wage has both benefits and disadvantages to the country. Minimum wage increases will decrease the income inequality gap. It can also improve the overall public’s health along with reducing the reliance of government welfare spending. Raising the minimum wage is just the same as everything you cannot take the good without the bad just as long as the good is better than the bad is.

The Pros and Cons of Raising the Minimum Wage. (2021, Mar 09). Retrieved from https://studymoose.com/the-pros-and-cons-of-raising-the-minimum-wage-essay 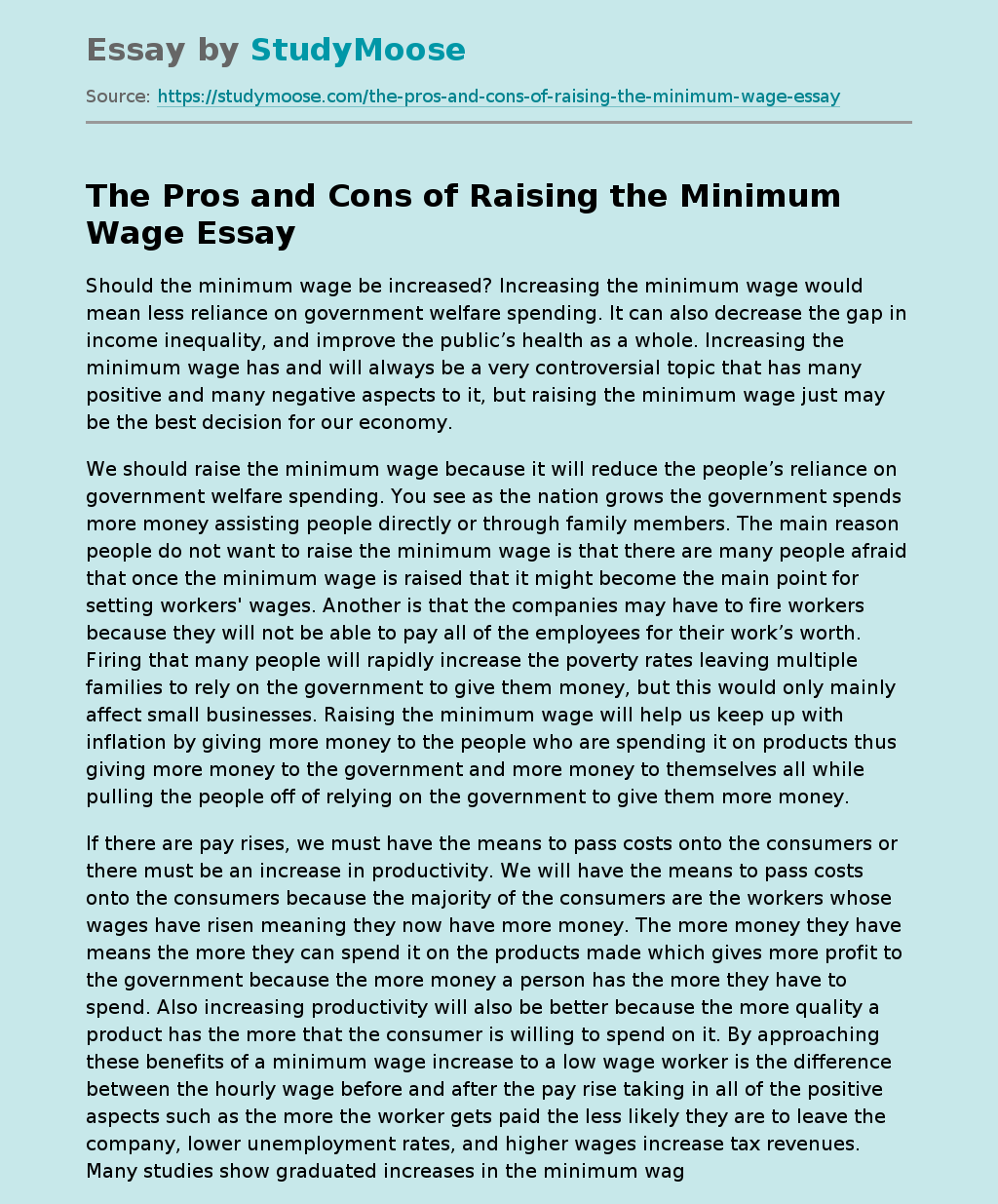