As a challenge to the incumbent directive and interpretive approaches of behaviourism and psychoanalysis therapies, person-centered therapy has revolutionised the direction of counselling theory and practice. As the name implies, person-centered approach views clients as the ultimate agents for self-change. It assumes that humans are essentially positively motivated and can be trusted to make their own decisions to shape, direct and take responsibility for the way they live their lives. Since its conceptualization by Carl Rogers, person-centered therapy has yield successful treatment outcomes across the world.

Don't use plagiarized sources. Get your custom essay on
“ Person Centered Therapy: Theory and Pros and Cons ”
Get custom paper
NEW! smart matching with writer

However, as with all therapies, there are inherent strengths and weaknesses. The obvious strength of this therapy is the emphasis of centrality on the client, who is able to find his solutions to problems in the context of a safe and accepting environment. It has, however, been met with limited success with clients who have trouble expressing themselves verbally. A wise therapist will do well knowing when to use person-centered therapy in its entirety, and when to swap treatments when he feels it appropriate for his client.

Person-centered therapy, now considered a founding work in the humanistic school of psychotherapies, began formally with Carl Rogers (Corey, 2009). Evolved out of his work as a clinical psychologist and developed as an offshoot of his theory of client-centered therapy, Rogers’ approach to counselling and psychotherapy emerged as a challenge to the incumbent directive and interpretive approaches of behaviourism and psychoanalysis therapies. While the latter approaches have made significant contributions to the field of psychology, both “neither acknowledged nor employed the inherent dignity of the human person” (Vitz, 2009).

Rogers’ abiding respect and interest for people as subjects rather than objects revolutionised the direction of counselling theory and practice (Corey, 2009). To examine his theory more closely, this essay will discuss the strengths and weaknesses of person-centered therapy and its contributions in helping build effective bonds. I will conclude with a personal evaluation and discuss the shortcomings in staying with this orientation.

As its name implies, person-centered approach views clients as the ultimate agents for self-change. It assumes that humans are, essentially, positively motivated with a natural internal drive towards growth, health and adjustment (Casemore, 2006). Coined by Rogers as the “actualisation tendency”, Rogers (1977) believed that this drive towards self-growth could be suppressed but never destroyed. As such, human beings could be trusted to make their own decisions to shape, direct and take responsibility for the way they live their lives.

The obstacles to this development, according to Rogers, are conditions, primarily those inflicted by parents, in which the individual is denied “unconditional positive regard” and subjected to “conditions of worth” (Rogers, 1959). Conditions of worth refer to the judgemental and critical messages from important people that influence the way the individual acts and reacts to certain situations. (Seligman, 2006) Over time, these conditions are incorporated as views of their own self-worth, leading to “incongruence” between how the individual perceives himself and the actual experience, resulting in possible confusion, tension and maladaptive behaviours (Rogers, 1959).

In order to reduce this internal conflict and move a person towards self-actualisation, Rogers (as cited in Casemore 2006) believed three interrelated attitudes on the part of the therapist are central to the success of person-centered therapy:

1. Congruence – genuineness, honesty with the client

2. Empathy – the ability to feel what the client feels

3. Unconditional Positive Regard – acceptance and respect towards the client

Congruence refers to the genuineness and authenticity of the therapists in what is spoken and portrayed through body language. For example, if the therapist says one thing and his body language is reflective of something else, the client will notice and this, in turn, impacts on the trust and level of openness in the therapeutic relationship (Seligman, 2006). Therefore a high degree of genuineness is needed in order to secure trust in the therapeutic relationship, especially for the client who may often be plagued with a lack of genuineness around him.

While it is a necessity for all therapists to be empathetic, in this instance, empathy is defined as a communication skill used to show understanding of the client’s emotions (Truax and Carkhuff, 1967). In this sense, empathy is about showing understanding and allowing the client to further open up, it is not about having sympathy and feeling sorry for the client (Seligman, 2006). It is about expressing the ability to be able to see the client’s situations for their eyes and encouraging the client to open up and freely express without feeling judged.

Some of the techniques utilised by therapist include non-directiveness, reflection of feelings, open-ended questions, paraphrasing and encouragers. These are used to facilitate the following goals of person-centered therapy (Seligman, 2006).

1. To promote client’s self-awareness and self-esteem.

2. To empower the client to change.

3. To encourage congruence in the client’s behaviour and feelings.

4. To help people to gain the ability to manage their lives and become self-actualised. Unlike other techniques employed in other therapies, person-centered therapy techniques are focused on creating an environment that facilitates the process of self-awareness. Rogers (as cited in Casemore, 2006) believed that if the therapist showed the above three qualities, it was “entirely sufficient on their own to enable therapeutic growth to be possible”. He also firmly believed that the experiencing of these conditions by the client will create a “strong therapeutic relationship” and no other techniques will be needed”

Strengths and Weaknesses of the Person-Centered Therapy

Like any therapy, there are both strengths and weaknesses. The obvious strength of this therapy is the emphasis of centrality on you, as the client. I believe that the most powerful way one can learn is through discovery. Lessons learned through self-experience are much more effective than a third party attempting to teach same lesson. Burning one’s hand after touching a boiling kettle is the fastest way to learn about that one should not touch a kettle when it is hot.

A child discovering wondrous things about the world around him gives him a greater richer experience rather than it merely being told to him in front of a television. Because I believe in this concept of learning by doing, I appreciate the philosophical position of the person-centered therapy taking a non-directive role as a therapist. The assertion the clients should find their own solutions in the context of a safe and accepting environment is something I agree entirely with.

Another positive aspect is the ease in which many aspects of the theory fits well with other approaches. A therapist who begins a client-therapist relationship with some form of person-centred therapy will find the client more receptive towards other forms of therapies that may be applied to him in the future. This is exemplified by the adoption of person-centered therapy by therapists across different schools of treatment. While many may argue that use of person-centered therapy as a main form of therapy is ineffective, they see the benefit of the core components in helping people change.

Cain (2008) stated that the person-centered approach is a potent way of working with individuals representing a wide range of cultural backgrounds because the core therapeutic conditions are qualities that are universal. Bohart (2003) also stated that the person-centered philosophy is particularly appropriate for working with diverse client populations because the therapist assumes the role as a “fellow explorer”.

However, the person-centered therapist will may find it hard to practice in collectivist cultures where individual commonly exhibit a sense of self that is oriented towards “what is best for the community and the common good” (Cain, 2008). Thus, a therapist who is more familiar with the individualistic culture may find himself constrained by a client who is unable to fully move towards self-actualisation due to a sense of obligation to fulfil the expectations of others around him.

The biggest criticism of person-centered therapy appears to center around its lack of concrete treatment approaches aimed as specific issues. It has been said that this lack of structure, results in a treatment approach that is too highly dependent upon the skills of the individual therapist rather than the treatment itself! (Thorne, 2002b).

Shortcomings with Staying with a Person-Centered Therapy Approach While person-centered therapy has become a trusted treatment used by therapists worldwide, one should note that the therapy has its shortcomings for those who persist with employing it as the only tool in their counselling toolbox. Person-centered therapy is notably unable to deal with the more severe personality or mental disorders. An example would be a client who clearly exhibits the mania and depressive episodes of bipolar disorder, in which a course of lithium treatment is clearly more appropriate!

Another shortcoming would be the need for a client to recognise himself in an incongruent state before person-centered therapy can be used to effect positive change. As pointed out by Casemore (2006), a client needs to be in a state of incongruency before therapy can happen. This would be difficult in cases where a client is utterly convinced of the accuracy of an incorrect schema. For example, a gambling addict who claims the ability to persuade a jackpot machine to pay out. In such a scenario, an astute therapist would do well to recognise when to switch to a cognitive-behaviour therapy approach. Inevitably, clients who have deep-rooted issues will find the other forms of proactive psychotherapy faster and more efficient.

While person-centered therapy is effective in assisting clients who are already fairly self-aware and who have some ability to verbalise their feelings, it might meet with only limited success with those whom find it difficult to express themselves verbally. In my opinion, however, holding the assumption that unconditional positive regard is a necessary mechanism for client growth in all circumstances is misguided. Unconditional positive regard can be a double-edge sword. For instance, when it comes from a respected authority figure (the therapist), it has the potential to further reinforce destructive behaviours.

For example, a cheating husband who is seriously considering leaving his wife for a younger woman because he feels that he is genuinely in love with her may misconstrue a therapist’s unconditional positive regard as an affirmative acceptance of his proposed plan. He may be incapable of seeing the viewpoint of his wife and children. If the only point of view that matters is that of the client (i.e. the husband), the result could be catastrophic.

In summary, person-centred therapy is a tried-and-tested approach which has yielded successful treatment outcomes since its conceptualisation by Rogers. There are admittedly notable downsides that come with its advantages, as described in this essay. A wise therapist will do well to also recognise its shortcomings, and to swap treatments when he feels it appropriate for his client.

Rogers, C. (1959). A theory of therapy, personality and interpersonal relationships, as developed in the client-centered framework. In S. Koch (ed). Psychology: A study of science. New York: McGraw Hill, pp. 184-256.

Person Centered Therapy: Theory and Pros and Cons. (2016, May 30). Retrieved from https://studymoose.com/person-centered-therapy-theory-and-pros-and-cons-essay 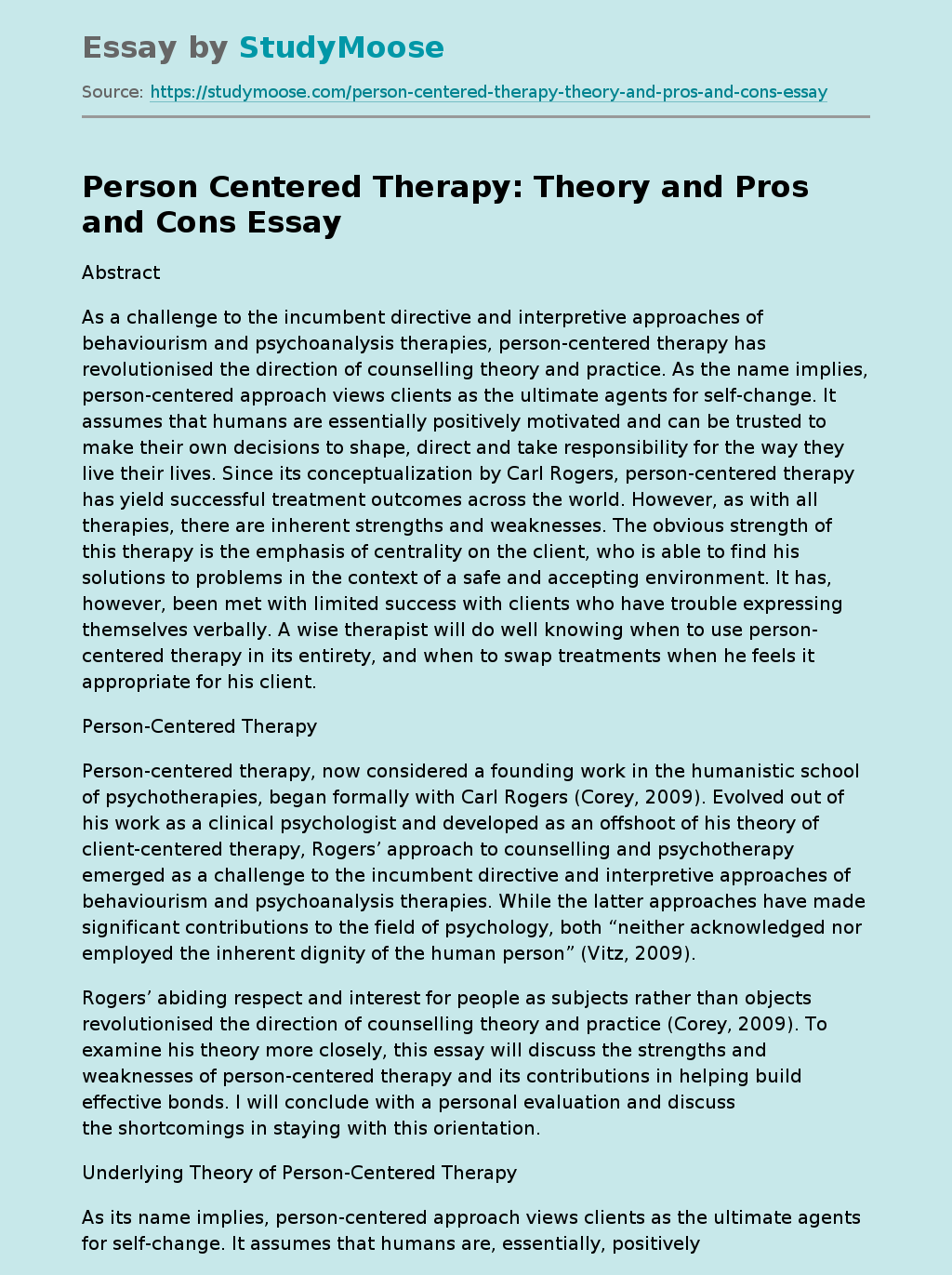