The Pros and Cons of Raising the Federal Minimum Wage

Minimum wage is the lowest wage permitted by law or by a special agreement (such as one with a labor union). In other words it is the starting job pay, giving a chance for employees to move higher in the company and ultimately gain a higher pay. The average minimum wage pay is roughly between $7.25 and $9.00 (ncsl.org). An American family of three can barely get by with this kind of pay, but what if America raised it? Employees would go “woo” while business owners would go “boo”! Let’s look at the pros and cons of raising the federal minimum wage.

Don't use plagiarized sources. Get your custom essay on
“ The Pros and Cons of Raising the Federal Minimum Wage ”
Get custom paper
NEW! smart matching with writer

Let us start off with showing the reasons for supporting an increase in the wage, or the pros, by using the Congressional Budget Office report to analyze the situation. According to the Chicago Tribune, “President Barack Obama identified raising the minimum wage as a key way to address the income gap in America. For proponents, the report estimates that 16.

5 million low-wage workers could see an increase in their weekly earnings and 900,000 people could rise above the poverty line” (Chicago Tribune, February 2014). Also, “Raising the minimum wage means minimum wage workers have more money to expend which means more money ripples throughout the economy as minimum wage employees are able to spend more” (wheniwork.com). As well as more opportunities for jobs, reduced expenses for social programs, decreased turnover rates, and inflation.

As for the reasons to oppose raising the wage, or the cons, we will use the Federal Reserve Bank of Chicago study.

According to the study, “10 percent increase in the minimum wage lowers low skill employment by 2 to 4 percent and total restaurant employment by 1 to 3 percent. Or instead of hiring fewer employees, the company may start outsourcing jobs to employees in countries that are willing to work for much less than $10.10 per hour, resulting in fewer jobs for Americans” (wheniwork.com). The cons pertaining to the minorities are, “For every 10 percent increase in the minimum wage, estimates show employment may fall as much as 6.6 percent for young black and Hispanic teens ages 16 to 19” (epionline.org). The minimum wage will also affect layoffs, price increases, competition will intensify, and minimum wage salaries are applied inconsistently.

In conclusion, “some suggest that creating more jobs for people who need them rather than raising earnings for people who already have them is a better solution for reducing the national poverty rate. Of course, this does not mean that raising the minimum wage wouldn’t be greatly beneficial to those earning it, but ultimately it does not help those who do not already have jobs to begin with. This is because of the number of minimum wage workers, relatively few are actually in poverty and of families who live in poverty, only about 7 percent have a full time worker in the family meaning poverty is not because people are not being paid enough, it is because they are not working or not working enough” (wheniwork.com). “In addition to affecting employment and family income, increasing the federal minimum wage would affect the federal budget directly by increasing the wages that the federal government paid to a small number of hourly employees and indirectly by boosting the prices of some goods and services purchased by the government. Most of those costs would need to be covered by discretionary appropriations, which are capped through 2021 under current law” (cbo.gov).

In my response to the change in minimum wage, I am neutral. As I write this paper and read the research I see both sides of the debate and I am confused. On one of my sources, it actually said it was good to raise it for creating jobs, then a few sentences down in the cons it said it would generate layoffs. There is really just as many pros as there are cons so I say my vote is tied. I will say that maybe they should do a trial and see if raising it would be the beneficial choice and if not they can always change it back. America is pretty indecisive when it comes to money issues anyways so I think that most people will understand. I definitely enjoyed righting about this topic and getting different feedback from family and friends. All the mixed views were interesting, but since they were all consumers of course they were pro raising minimum wage. They did however understand the opposing side very well, as some of them came from business backgrounds. In the end, if had to absolutely choose at this very moment I would say raise the minimum wage. Who is to say that later on down the road, if I own my own business, that I will not change my mind?

The Pros and Cons of Raising the Federal Minimum Wage. (2021, Dec 13). Retrieved from https://studymoose.com/the-pros-and-cons-of-raising-the-federal-minimum-wage-essay 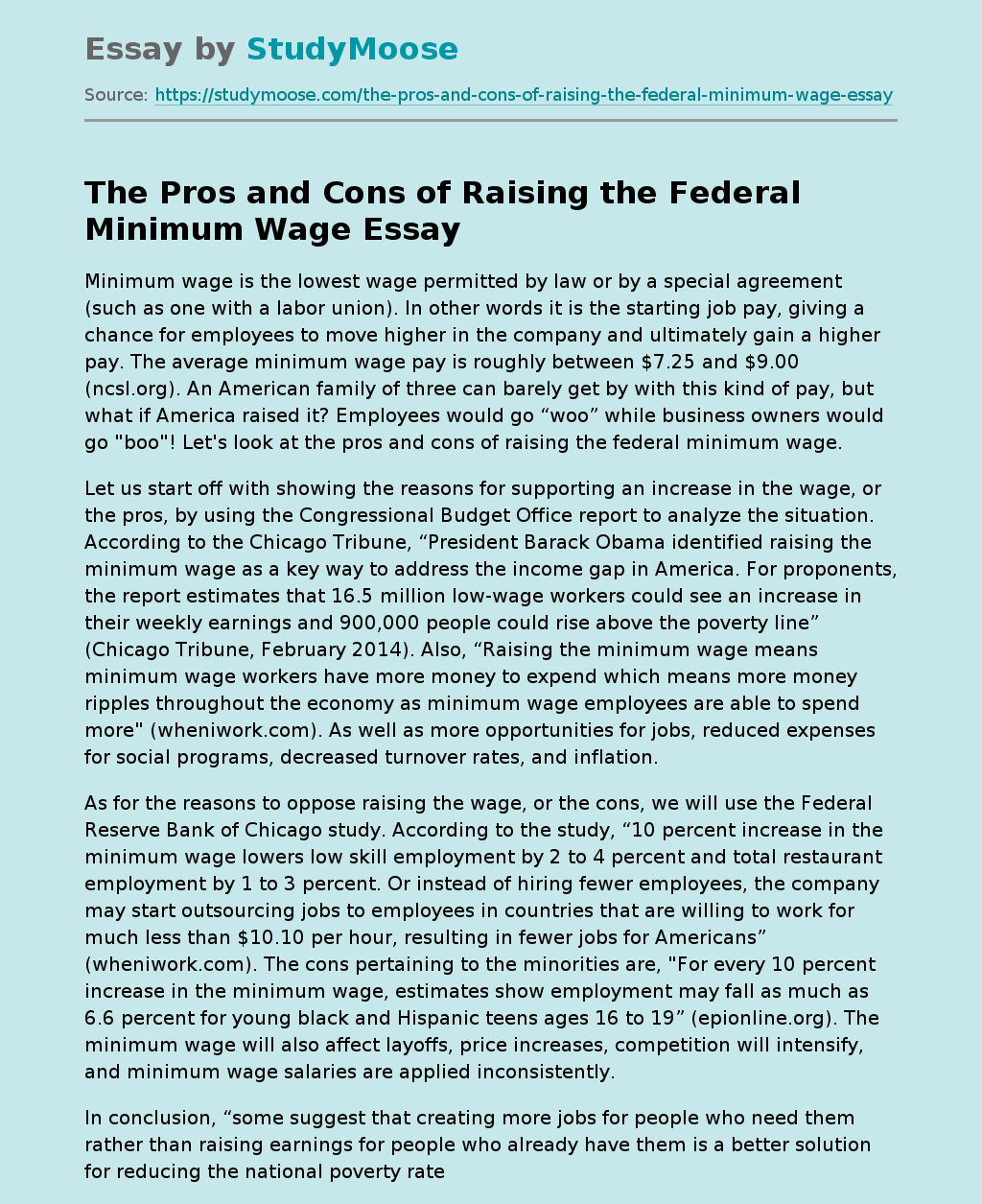