The Pit and the Pendulum

There are some stories, where the objects that are described or portrayed play a more important part of the story than what we believed. In The Pit and the Pendulum, a short story written by Edgar Allan Poe there is certain symbolism that adds meaning to the story. The narrator is telling the story from a dungeon in Toledo, Spain as a prisoner during the Spanish Inquisition. In the story, there are certain objects that have important symbolism for the drama, since they lead the narrator to his death.

Don't use plagiarized sources. Get your custom essay on
“ The Pit and the Pendulum ”
Get custom paper
NEW! smart matching with writer

This story is one of Poe’s more popular works since he creates a dark atmosphere, adds suspense and a deep meaning to these symbols. His symbolism transmits the theme of man struggles to survive. The symbols make the narrator face his main problem and emphasize what he feels while characterizing his emotions.

The pit is the most important symbol in the story. The narrator almost faces death by falling on the edge of the pit, realizing how close to death he had been because the pit had a deep surface.

Proficient in: The Pit and The Pendulum

The pit represents death or descending into hell. It can be interpreted as death because for the narrator, it is something unknown, he didn’t know that the pit was there, or how deep it was. The same happens with death, nobody really knows what happens after we die or where is it exactly where we go. In the story, the pit is portrayed as this frightening symbol that can also be interpreted as hell.

Since hell is the belief of a place where people go after death because they have sinned, the narrator is considered to be guilty of a crime he did not commit, he doesn’t deserve to die in the pit, or according to the symbolism, burning in hell. At the beginning of the tale, the narrator describes the “seven tall candles” that remind him of angels that later turn into “meaningless spectres, with heads of flame.” The meanings that Thoreau wants to give to these candles are a sign of hope, followed by disappointment and desperation. The fact that he imagined angels coming to his rescue means that he was holding on to his life, not giving up until those angels turned into devil, and then his perception changed into thinking that he was all alone and abandoned. “And then my vision fell upon the seven fall candles upon the table. At first they wore the aspect of charity, and seemed white slender angels who would save me; but then, all at once, there came a most deadly nausea over my spirit, and I felt every fiber in my frame thrill as if I had touched the wire of a galvanic battery, while the angel forms became meaningless spectres, with heads of flame, and I saw that from them there would be no help.”

The pendulum that is portrayed in the story is a symbol that represents time. As the pendulum descends more and more, the narrator realizes that is coming right to him, willing to take him to his unbearable death. In the story, time is a crucial element, since the narrator has his seconds counted before facing his death, which luckily, he escapes. “It was the painted figure of Time as he is commonly represented, save that in lieu of a scythe he held what at a casual glance I supposed to be the pictured image of a huge pendulum, such as we see on antique clocks.” The pendulum is an instrument for torture since it involves death itself while counting off the seconds until the end. The symbolism that the objects project in the story emphasizes what Poe wanted to add or represent the meaning that is beyond what he wanted the narrator in the story to portray. The symbols connect the narrator to what is actually happening in the story and make the reader understand better. In this case, the symbols that were utilized are vital for the story, without them, the story would not have the same meaning and this happens with a lot of Edgar Allan Poe’s stories and poems, it is an element that identifies them.

I found the story very interesting so I chose it for my Brown University essay. I thought that the symbols were not hard to interpret. I decided to analyze the symbols because they are a very important part of the story, even though I did not analyze all of them, but I choose the three that I considered more relevant to the story

My essay is concise and easy to read and understand. I included a lot of examples like direct quotes from the text that support my body paragraphs. That was what I liked the most about my essay, the quotes that I included, because it gives you an idea of the point of view of the narrator and how exactly he felt or what he thought. My introduction is understandable and it gives you the idea of what the essay is going to be about. The body paragraphs explain each of the symbols and I provided examples and analyzed them to make it more clear. My conclusion explains overall what the essay was about and it summarizes the introduction.

The Pit and the Pendulum. (2016, Feb 28). Retrieved from https://studymoose.com/the-pit-and-the-pendulum-essay 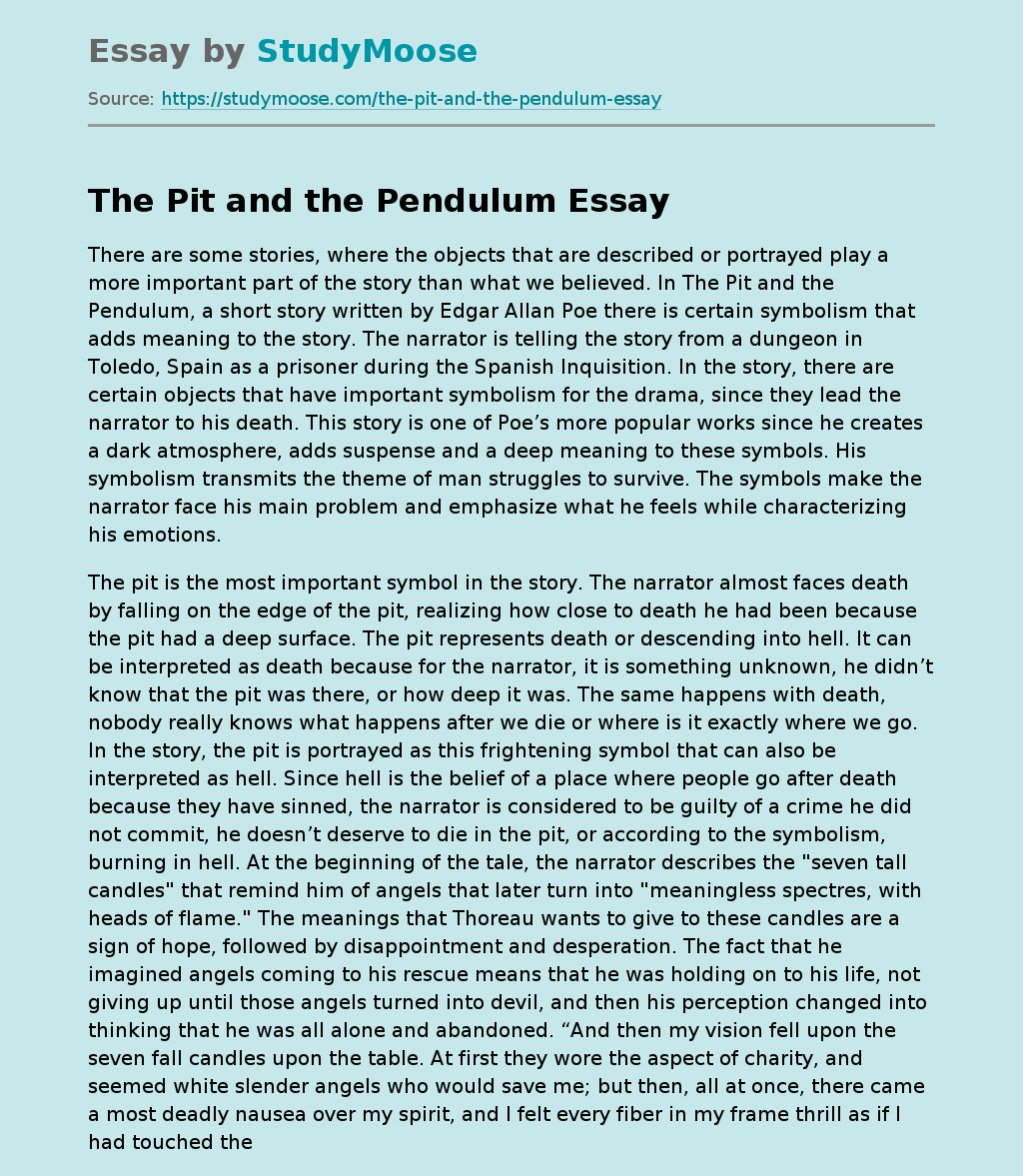