Home Literature Edgar Allan Poe The Pit and The Pendulum

The Pit and The Pendulum 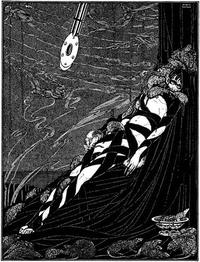 “The Pit and the Pendulum” is a short story written by the famous Edgar Allan Poe, who’s stories are known for painting a morbid picture in your mind. This story takes place during the Spanish Inquisition, where Poe is sentenced to death and he writes about his fears. What is fear? Is it to be afraid? Is it to be sitting in a prison rotting to death? Throughout his story, Poe develops a intense setting, theme and an mysterious plot with the help of figurative languages and sounds.

First off, the setting is very important to a story. The setting paints a picture that allows the reader to see that the character sees and fully understand. As Poe stated in his story, “the blackness of eternal night encompassed me,” helps the reader completely visualize what it would be like to see absolutely see nothing, in a cold, dark cell. This setting also creates a sense of terror because Poe doesn’t know his surroundings. There could be a stack of bones. There could be blood stains everywhere. He could only imagine.

Second, in this story, “The Pit and the Pendulum,” the theme is a cruel death. The main character has been given numerable choices to what his death will be. He builds a sense of suspense and premonition with the risky fate that the main character has to choose. The main character or narrator, either has to choose between a physical or mental death. Jumping into the pit, means that he will end up dying of starvation. If he chooses to go by the pendulum, it is a mental death. He will never know when the penetrating blade will drop, it can drop in seconds or it drop slowly and painfully. Whatever he chooses will be the death of him.

Third, Poe heightens the plot by building up to the climax with questionable situations. At the beginning of the story, the man was locked into a cell and was being ready to be punished for a crime nobody knows. We are unsure what his punishment will be, but we do know from Poe’s elaboration is that it is not turning out so pretty. Poe uses suspense to introduce the deathening punishments and what the character has to do. For example, the character of this story has to choose what his death will be, he has no safe bet, all choices are dreadful. That’s horrifying, right?

Finally, after reading this story, “The Pit and the Pendulum,” Poe has proven express the effect of agony and trepidation in his morbid stories. The narrator was proposed with a loathsome choice of death. He had the selection to dive to death, like a swimmer diving into a pool, in a the infinite pit of God knows what or he could be julienned by the penetrating pendulum or he could be flattened by the burning hot walls closing in on him or lastly, he could just leap into the pit. What will he choose? Will someone solve the unknown crime?