The Person That Influenced Me Most

Most people writing about people who have influenced them will choose someone they admire, a mentor or other important person who has been a role model for them over the course of their lives. My description, on the contrary, will aim to describe someone who influenced me in a totally opposite way: by being an anti-role model, someone I would not like to resemble, if only for some minor points. He is not in any way an extreme villain or anybody with strongly deficient ethics.

He is just a person who, in my mind, is going to fail in most life situations. We first met when I took a part-time job as a content writer for an Internet project. I was not particularly impressed with the outlook for this business, but took the job as a way to get my first experience and learn more about the particular sphere on which I was writing. Alex was a relatively young marketing manager, in his late 20s, and being of more or less the same age compared to the rest of the team, we began to communicate a lot.

He seemed a highly professional person with great expertise in his area, but his ways of dealing with colleagues struck me as in some way completely wrong. He simply reacted to innocent criticisms with a lot of aggression so that people would pull back, scared by the strength of his reaction. Our boss was a good-natured elderly man, not much from the point of view of knowledge, but comfortable in what was probably his last job and nice to employees.

Alex immediately saw an enemy in him and reacted to his comments with some anger for which I had little understanding. It was no surprise that Alex’s harshness and what I would call a peculiar sense of humor evoked widespread resistance. People began to shun him in everyday interactions, negatively respond to his comments during meetings, and evade him on the company’s shuttle bus and in the café.

The boss for a long time took his behavior in stride, but was extremely displeased with his attitude shown when Alex was reminded of the deadline for his project terminated him on a short notice. One may wonder why I still communicated with him. The matter is that I can take what other people see as rude with a grain of salt and react with a good joke. Besides, we found plenty of common interests, and with me he was not always gruff. A little more communication discovered the true cause of his troubles: his wife had left him just before our meeting, and he was reacting to her desertion with anger and pain. This was really sorrowful, but why, I asked myself whether this is a sound reaction. Is it wise to take out your personal troubles on other people? To me, the answer is a clear “No”. Looking at Alex, I could draw a lot of inferences to be used in my personal experience. First, it never pays to be rude to others. No matter what, I told myself, we must preserve human dignity in any situation.

Second, I thought, we should perceive communication with other people as a way to gain emotional support when we face a problem, not vice versa. People are there to share our burden with us, not get us deeper into trouble. Even if you do not want to share your problems with them, you can make them help you by distracting you from your concerns. I did tell Alex what I thought of his way of dealing with problems. However, the impact of my thoughts was limited: he would not listen as he was too much engrossed in his own concerns. This was really pitiful, but also helped me develop in one important way: realize that I have to be more mature and convincing to persuade people to change their lives. This was yet another revelation and another insight for the future. Sometimes we indeed learn more from those whom we do not want to imitate than from unattainable role models.

The Person That Influenced Me Most. (2016, Oct 21). Retrieved from http://studymoose.com/the-person-that-influenced-me-most-essay 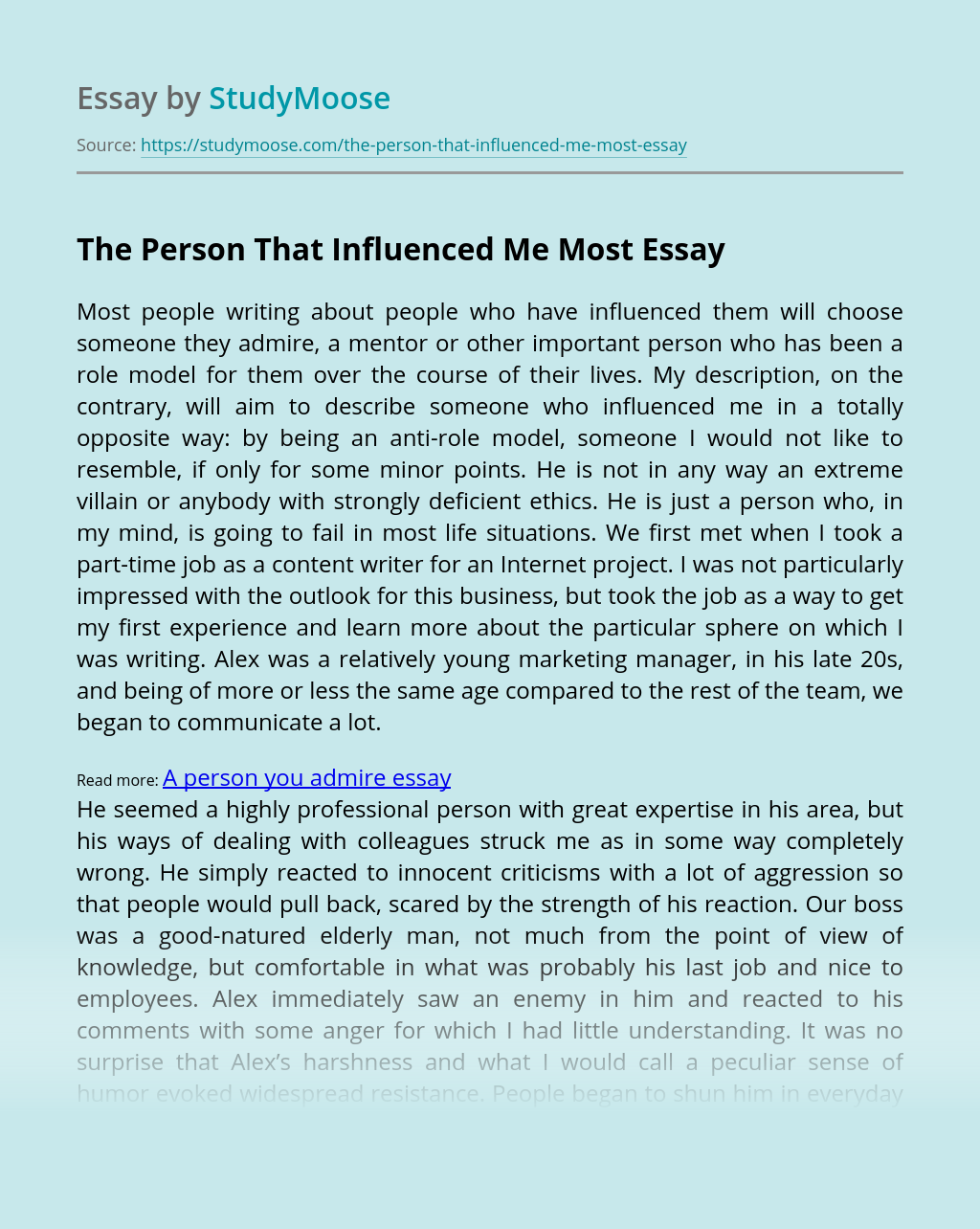 Don’t waste time
Get a verified writer to help you with The Person That Influenced Me Most
Hire verified writer
$35.80 for a 2-page paper
Stay Safe, Stay Original